Long before the horror of the Tuskegee experiments, blacks were suspicious of the white medical establishment -- with good reason. 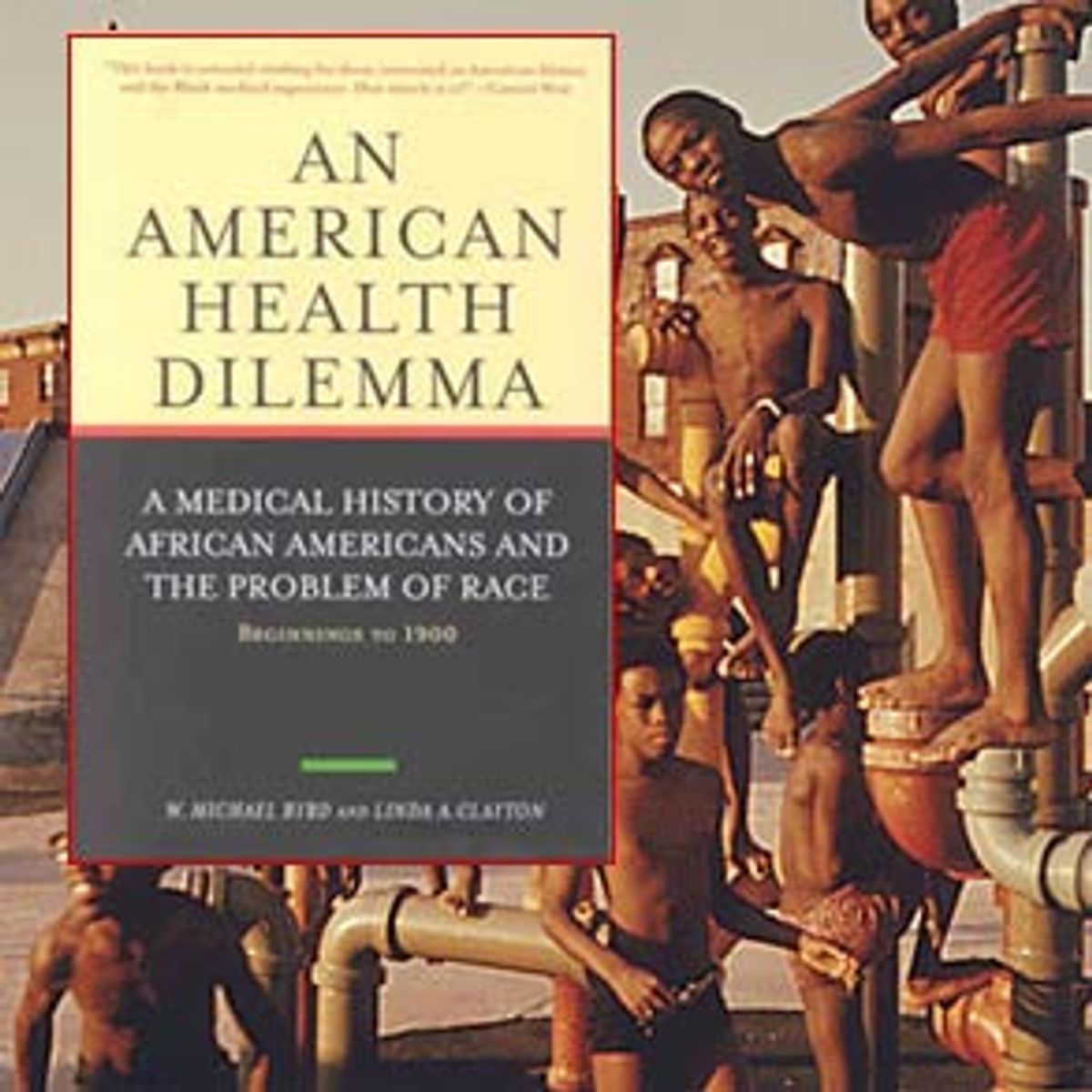 While reading this book, I kept thinking about Richard Simmons -- you know, the little guy in gym shorts. He used to say that inside every fat person was a skinny person trying to get out. I was reminded of his words while slogging through "An American Health Dilemma," for under its pounds of excess verbiage there's a lean, strong story waiting to escape.

The authors, I know, would not appreciate my comparison. This is a capital-S serious book that seeks to impress with its heft. The title recalls Gunnar Myrdal's 1944 classic on race relations, "An American Dilemma." A reader immediately understands that authors W. Michael Byrd and Linda A. Clayton, African-American physicians who are also husband and wife, intend their work to become another classic, the standard history of medicine and blacks in the United States before 1900. (A second volume will cover 1900 to the present.)

In large part, they succeed. Byrd and Clayton tell a painful story, full of outrageous cruelty and neglect. The tale has been told before, but never in such depth or heartbreaking detail.

Byrd and Clayton argue persuasively that the poor health suffered by many blacks today has its roots in the treatment they received from slave traders and owners hundreds of years ago. Overworked, underfed, lacking immunity to the diseases they encountered on these shores, the earliest African-Americans suffered a "slave health deficit" that their ancestors have never been able to make up. Today blacks have a life expectancy five to seven years shorter than that of whites, more than double the rate of infant mortality and much higher incidences of diabetes, heart disease and certain cancers than the general population has.

In the dawning days of the new country, of course, doctors didn't have much to offer. Blacks were probably grateful to be spared standard treatments such as sweatings and bloodlettings. As medicine advanced, however, and blacks continued to be denied the services of physicians, the gap between their health status and that of whites grew. An assumption developed, still detectable in news coverage and public policy decisions, that poor health was somehow normal for African-Americans, their natural state. This convenient expectation among whites became a self-fulfilling prophecy for blacks.

When doctors did pay visits to blacks, they came on orders from slave owners. Wary of the motives and loyalties of white physicians, and more comfortable with healers in their own traditions, blacks often resisted or ignored the prescriptions of plantation doctors. The authors demonstrate that blacks were suspicious of the medical profession long before the Tuskegee medical experiments and other 20th century horrors -- with ample reason.

Byrd and Clayton show in unsparing detail how the white medical establishment mistreated blacks. Inexperienced doctors honed their skills on blacks before attempting to treat white patients. Medical schools used blacks for experiments and demonstrations. Hospitals and clinics turned away blacks or subjected them to substandard treatment in segregated wards. Professional organizations, including the American Medical Association, denied membership to the small number of African-American doctors. Many physicians enthusiastically contributed to the pseudoscientific literature on black inferiority. When African-American health further deteriorated following the Civil War, many doctors named the newfound freedom as the cause. Others predicted, or perhaps hoped, that the extinction of the race was near.

This shameful tale is an invaluable addition to our understanding of race and medicine. The problem is, the story occupies perhaps one-third of this nearly 600-page book. The rest is taken up with irrelevant information, endless repetition and unfathomably turgid prose. We are treated to a history of race and medicine from prehistoric times through the Renaissance. We are given pages of straight history about slavery, the Civil War and Reconstruction that would be more suitable for a social studies textbook. We're told again and again what the book plans to do, what its "objectives" are; at the end, we're taken through, point by point, what the book has accomplished. And we are given sentences like this one: "Such an approach effectively reveals and demonstrates this dilemma's operational mechanisms from its history-based roots to its present configuration, which is deeply embedded within and permeates the U.S. health system and its culture."

The authors insist that their excesses are necessary as a defense against racially motivated critiques. Because "any scholarship involving the reassessment of American concepts of race, Western history, or American history calls forth contentiousness, defensiveness, and avoidance of allegations of intellectual dishonesty," Byrd and Clayton write, their book "may seem overdocumented, occasionally repetitive, or overburdened with endnotes and footnotes compared with conventional studies." In one sly sentence they have patted themselves on the back for their thoroughness, set themselves up as brave warriors against the establishment and inoculated themselves against legitimate criticism.

Their odd mixture of incautious rhetoric and fastidious documentation produces some absurdities, such as a reference to "lily-white-owned and -operated health care corporations" that is accompanied by a footnote helpfully explaining that "lily white" means "excluding or seeking to exclude black people." The authors hint at, though never quite espouse, a radical understanding of race in this country. They use quotation marks when referring to high school "achievement" tests or America's "meritocracy," and suggest that the failure of the government and the mainstream healthcare system to adequately consider the healthcare needs of minority groups "calls America's democracy into question."

The book is weakest when it abandons its scrupulous effort to reconstruct history and offers pronouncements on modern-day politics: "Anti-discrimination rules designed to protect disadvantaged minority groups such as Blacks and Native Americans, victims of centuries of invidious racial discrimination, are now used to protect Whites," they charge. "Aggressive feminist and newly empowered Latino and Asian American groups" now "threaten to overpower the interests of America's oldest and largest minority group."

How much better if Byrd and Clayton had imposed discipline and focus on this bloated book. A lean, tight story could have taken their important and relevant message and run with it.