How deep is your love?

The INS wants proof of my romantic attachment. 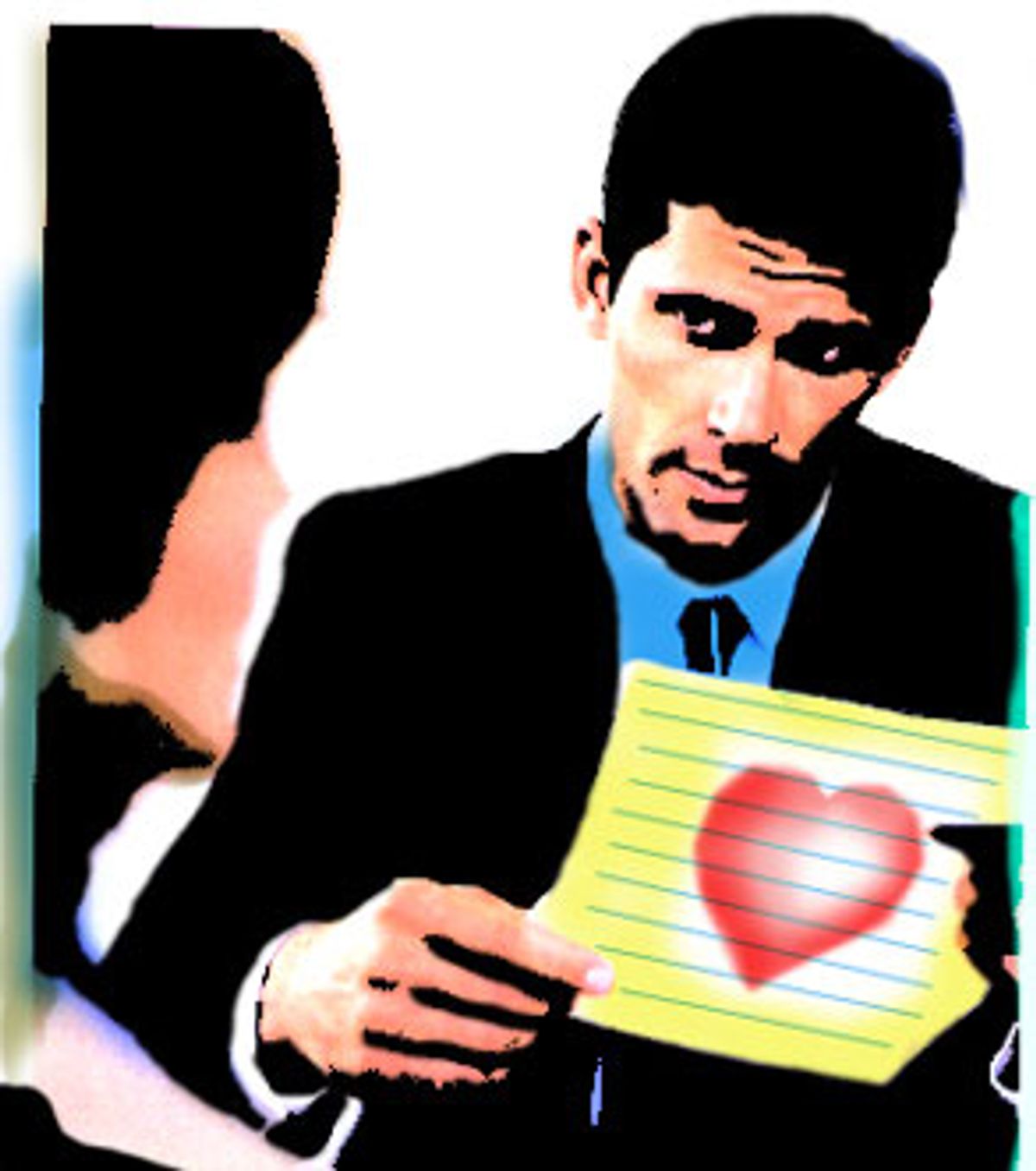 I really, really love my husband. I say this not because I have any inclination to be so effusive, but because the Immigration and Naturalization Service really, really wants to know. You see, I am that cultural curiosity worthy of your suspicion: the foreign applicant for a green card who recently married an American.

The question on your mind (perhaps) and on the minds of the hardworking men and women at the INS (definitely) is: "Did you marry the guy just for a green card?" It isn't a ridiculous query under the circumstances and I am prepared to answer it, I suppose. It's just that I have detected, in the INS at least, a tendency to play the part of a slightly sadistic parent who truly enjoys denying a child something simply because the child wants it so very badly.

Now, my husband of six weeks is an intelligent man. He's a sensitive, modern man. And like any sensitive, modern guy, he knows that nobody's gonna be happy until his Canadian wife finds legal professional fulfillment. So he was, after a year and half of courtship, and an excessive wedding, more than happy to file the papers necessary to sponsor me for American citizenship.

First, though, we had to assemble the papers, and this is where the sadistic parent comes in. In addition to the usual detailed forms (the Canadian law degree I possess went a long way toward figuring this part out), several unflattering wallet-sized photos and checks for various (seemingly arbitrary) fees, the INS wanted "evidence of romantic courtship."

This is a frightening thought. My husband and I were both older than 30 -- and living in New York -- when we met. This means that our relationship was a vague, reserved, emotionally withholding set of interactions for quite some time. Heck, even when a sexual relationship develops, there isn't necessarily any reason to believe anyone loves anybody. Ours wasn't dysfunctional in a "Sex and the City" way or anything, but there were no innocent proclamations of overwhelming want, desire and passion.

More importantly, at no time did either of us write in a note, card or letter what our emotional state was, what we wanted, what we were aiming for in the relationship. We stated this in each other's presence -- frequently -- but we certainly didn't put it in writing.

So here I was. Newly married and struggling for written proof of the mutual increasing infatuation that led to our marriage. There were airline tickets for trips taken together, a few restaurant matchbooks. Receipts for jewelry (which my husband thought were definitely binding in some way) and a few e-mails back and forth showing our plans for dates and trips. But did I have anywhere, even in a birthday or Christmas or Valentine's Day card, a written statement that said, "I love you sincerely and deeply with all my heart and for no improper purpose," signed, dated and notarized? I did not.

Even the e-mails were signed off with "See you later" or "Looking forward to seeing you." But hey, in our relationship there happened to be a big difference between what was said and what was written.

I wanted to apply for a professional restriction waiver. I implored my immigration lawyer: Surely these rules were designed for those who married tortured poets -- my husband works on Wall Street! He manages a hedge fund, for God's sake! He is incapable of expressing his feelings. He thought the Tiffany receipts should have done the trick. I mean, did the INS really believe that this guy would write and date a statement of his overwhelming emotional dependence on me? Heck no! He was barely able to admit it to himself, much less put it in writing.

I scoured our e-mail traffic looking for some proof that ours was a true romance and not a relationship of convenience. I mean, how did I even know that my husband married me because he loved me and not because he secretly wanted for me to have a green card? I started asking other women, "How do you know your husband really loves you?" Most pointed to the unwritten gestures: romantic pillow talk, time spent together, a wedding. None had written, signed and dated declarations of love that would meet a legal standard of proof.

So the lawyer in me collided with the insecure newlywed in me, and the sight was not a pretty one. The week I was assembling our romantic documents (apparently wedding photos of 200 people eating and drinking at our expense were not sufficient proof), I greeted my husband each evening with questions like "What did you mean when you wrote, 'I miss you' in this e-mail? What exactly, did you miss?" or "Why didn't you date the Valentine's Day card in 1998?" or "Why didn't you sign the card that came with those flowers you sent with your full legal name? Is this nickname on the card just a pseudonym you use to avoid having the affection traced to you?"

My husband, being a practical guy, thought the INS should think like the IRS. Receipts should be everything. He could prove he bought gifts, trips, flowers, meals and jewelry. In his mind, he wouldn't have done these things if he didn't love me. But the INS is strangely old-fashioned in its sentimentality. The agency believes that spending money doesn't prove love; only sweet little love notes signify the genuine emotion required to support an application for citizenship.

I eventually realized that this government body had taken on a deistic quality. The INS would determine my fate, so I performed all sorts of illogical rituals hoping to win its favor. It was like the INS was some sort of Hindu goddess. (It occurred to me that this predicament was dark karmic justice for not being a more observant Hindu, yet having a splashy Indian wedding.) I wondered if I was being punished for my recent agnosticism with this torturous bout of bureaucratic hoop-jumping. This thing had taken on an immense power and had become larger than life to me, and I now bowed to the power of the INS and obsessed over its proscriptions.

Then I realized something personally that I had always known as a lawyer: The government is omnipresent and powerful and can will you into submission with its rules and regulations -- however arbitrary those rules may seem to be. As a lawyer you're taught to stand back, dissect and attack those rules. Cool, calm and collected. You make lists, label manila folders, write letters, and so the dance goes until, hopefully, a positive outcome is bestowed upon you by the powers that be.

But when it's your own life and your fate at the government's mercy, you become immersed in a way that the lawyer advising you can never fully appreciate. You become obsessed with the entity, you contort to please it and you pray to it so that it might assert charity and generosity and see fit not to mess up your life.

After all was said and done, I sat down with myself, the lawyer, and myself, the emotional client. I had, in fact, been a terrible lawyer to myself. Instead of providing reassurance and guidance to my client, I had turned my client into a defensive, suspicious, insecure entity by alarming her more than informing her. I had used worst-case scenarios as a motivating device.

I reached a low point when I met a French-speaking taxi driver who told me that he got his green card in just nine months. He met his American wife twice -- they were introduced by another cabbie who knew of people who could "help" him with the INS. The first time the pair met was on the way to the INS interview; the second time was a rendezvous in which the cabby paid his "wife" for her "consultation." He gave her $3,000 and a used Nissan. He hasn't seen her since, and they divorced six months later.

Heck, even the car wasn't American.

While I don't endorse a cavalier and felonious approach to the INS application process, I learned that this process was going to get as big in my heart as I let it. That taxi driver knew that this application had nothing to do with love. His perjury aside, he wasn't letting the process intrude into his psyche, and I didn't have to either.

I went home, and the client in me stopped taking crap from the lawyer in me. I told the lawyer not to be such a tight-ass, that we would comply with the law, get organized, get focused, but frankly, much of this stuff was none of the government's business. We would provide proof to satisfy the law, but the act of emotional carte blanche was going to stop. I wanted a green card, but I wanted my dignity, too.

The application process was eventually completed, and while I gave the INS proof of my love, I stopped trying to prove my love to it.

Seema Kalia is a lawyer and writer living in New York, and really, truly, loves her husband.