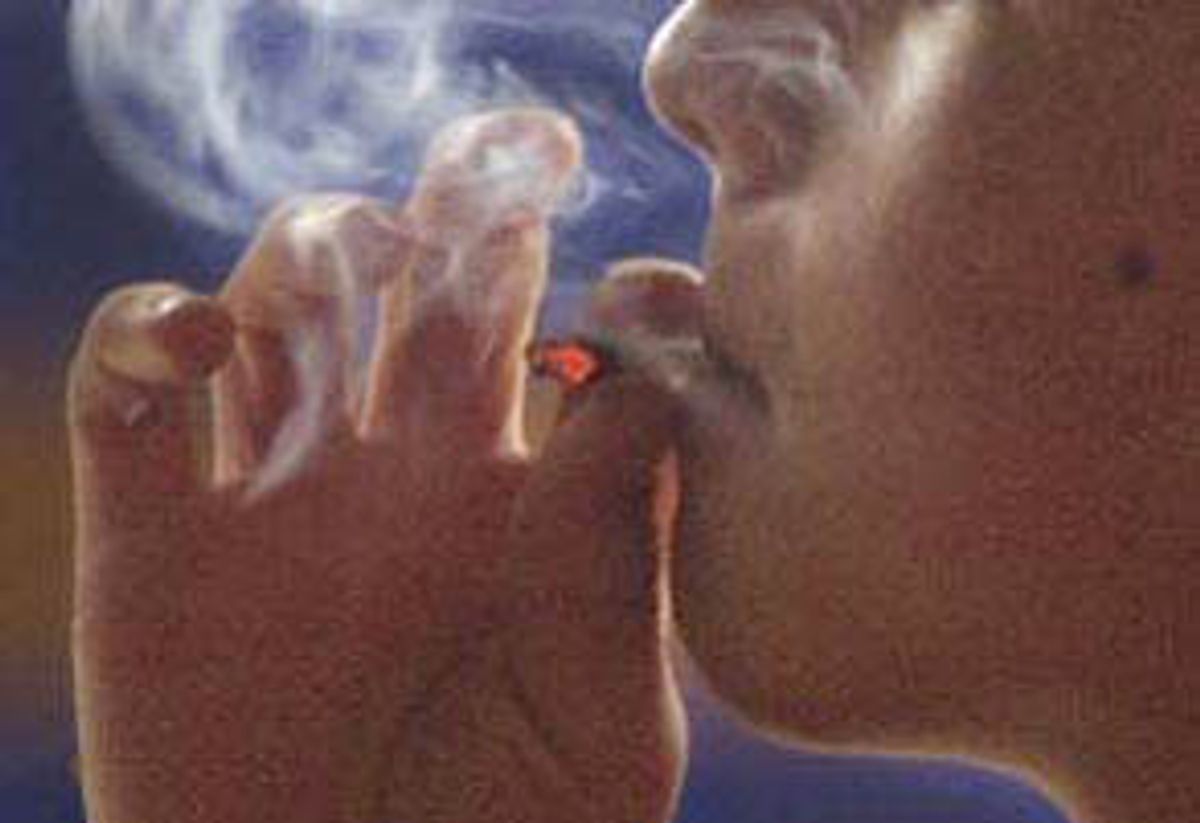 We're all used to stomaching a little political hypocrisy in the United States, and around election time we have to gag down more than usual. But there are times when the gap between reality and rhetoric, between what we know to be true and what our leaders say, becomes so outrageous as to feel positively surreal. And the war on drugs -- specifically, the campaign against marijuana use which makes up a major portion of that war -- has now gone beyond the tolerable Magritte phase and into full-blown, hideous, melted-watches Dali.

Wednesday night, two men who everybody knows spent portions of their youth toking deeply on large spliffs -- Al Gore has essentially admitted it; George W. Bush will only say he's been drug-free since his late 20s, and won't talk about the years before that -- are appearing in front of the American people and asking to be elected president. If the subject of drugs comes up -- and unbelievably, it rarely does along the campaign trail -- hardliner Bush will call for offenders to be drawn and quartered, while bleeding-heart Gore will propose that they be impaled on sharpened spikes.

And as they speak, we will all pretend a lot of things.

We will pretend not to notice that talking about "drugs" without distinguishing between different kinds of drugs, or between using drugs and selling them, is as absurd as lumping jaywalkers and rapists together.

We will pretend that getting high, which every culture in the history of mankind has done, is a dreadful, shameful sin that can only be expiated by conversion to Christianity or some similar cataclysmic, prior-life-erasing act.

We will pretend that the official propaganda that marijuana is a "gateway" drug leading inexorably to hard drug use is an argument worthy of serious consideration and not a cartoon out of the "Reefer Madness" era.

We will pretend that we don't either know or strongly suspect that most of our co-workers and friends have smoked or still smoke dope, with no apparent ill effects (except for that one high-ranking exec's tendency to start babbling about the novel he's going to write).

We will pretend that there is nothing hypocritical about two former recreational drug users -- who somehow miraculously emerged unscathed from the billowing clouds of smoke and Jim Beam fumes to vie for the most powerful office in the world -- who refuse to talk honestly about the issue.

And when we're done with all this pretending, we'll get the taste out of our mouths with a couple of martinis. Or a joint.

America's marijuana hypocrisy is not the biggest issue facing the country, not by a long shot. But it just may be the most irritating. It's the flag-draped elephant in the room, the glaring absurdity that dare not be questioned lest one be tarred as a dazed and confused corrupter of youth. Being forced to walk past this big, tail-swinging, peanut-crunching mountain of moralizing idiocy is maddening, but our hysterical primitivism about drugs has more serious consequences.

The war on drugs has resulted in an incarceration rate so obscene that almost 1 in 4 of every person behind bars in the entire world is locked up in the United States. At this very moment, American jails and prisons hold tens of thousands of people -- vastly disproportionate numbers of them black -- whose only crime is possession of marijuana. (According to Bureau of Justice statistics, in 1997 -- the most recent year for which statistics are available -- 8,582 people were incarcerated in state and federal prisons for possession of marijuana. Many more, of course, are imprisoned in local jails.)

The drug war degrades respect for authority. It leads to cynicism and apathy. And, of course, it blights thousands of lives. In 1998, over 600,000 Americans were arrested for simple possession of marijuana: They were handcuffed, read their rights, booked. Comparatively few of these people were actually sentenced to prison terms, but the damage was done. There are 600,000 Americans who feel just that much further outside civil society than they did before -- and needlessly so.

Our ostrich-like stance on this subject was highlighted last week by the great Marijuana Debacle that befell the British Conservative Party. Tory shadow home secretary Ann Widdecombe, trying to seize the moralistic high ground so beloved by right-wingers on both sides of the pond, proposed that possession of even the smallest amounts of cannabis be punished by a mandatory 100-pound fine. For a few days everything went swimmingly -- until one Tory shadow cabinet minister after the next came forward to say that well, maybe the law wouldn't be such a good idea because, actually, they themselves had smoked marijuana.

The final blow was when Tory agriculture spokesman Tim Yeo said that not only had he smoked marijuana, he liked it -- the first time that a politician has ever dared to state this shocking fact, which flies in the face of everything we know about the crazed, subhuman addicts who are in the thrall of the killer weed. Widdecombe and Tory leader William Hague had to beat an extremely undignified retreat, and a national debate has begun about marijuana laws in the U.K.

Of course, the ministers who suddenly came forward with tales of Oxford undergrad puffery probably had their own less-than-noble reasons for doing so, most of them having to do with checking the political ambitions of Ms. Widdecombe. But the point is that England has a political and civic culture enlightened enough that eight high-ranking right-wing politicians could not only admit they smoked dope, but could refuse on the grounds of rudimentary morality to punish others harshly for a crime they themselves had committed.

By contrast, try to imagine Newt Gingrich, Dick Armey, Tom DeLay, William Bennett and their ilk all coming forward and admitting that they'd smoked dope in their 20s, and that maybe our draconian drug laws could use a reappraisal. It's inconceivable: The Big Lie foisted by anti-drug propaganda, which paints all drug users as criminal and degraded and which American journalists have been too cowardly to challenge, is so mutely accepted that it would take a politician of rare courage to stand up and say that the emperor -- or the czar -- has no clothes.

So in terms of humaneness and honesty about drugs we're humiliatingly behind England -- and England has the harshest marijuana laws in all of Europe! Spain, Holland, Belgium, Switzerland, Germany, Greece and most of the other European countries have essentially decriminalized marijuana use, or given it the lowest law-enforcement priority. There are many excellent legacies of our Puritan past -- the hormone-injected turkeys that grace our Thanksgiving tables; workaholic tendencies that allow us to buy vast, chrome-bedecked SUVs -- but our ludicrous insistence that pounding four Maker's Mark Manhattans is somehow better for the individual and society than taking a few puffs on the pipe of peace is not one of them.

When word came down that George W. Bush, former party-hearty boy whose greatest and indeed sole asset as a candidate was his supposed "likability," was going to be the GOP candidate, one could be forgiven for fondly hoping that he might somehow pull a Nixon-in-China on the drug issue. No triangulating Democrat, of course, could ever go up against the drug orthodoxy. Poor wimpy Clinton was so traumatized by the subject that all that smoke he sucked into his lungs back in his longhair days suddenly vanished, leaving him clear-headed, rational and ready to jump the bones of the first intern to present her thong in the Oval Office. And Gore, fearing that he'd be painted by the right as even more of a decadent, Hollywood-loving menace than he already has been, won't make a peep. But Bush, one might have thought, just might be able to do it.

Of course, Bush's own carefully-phrased non-denials of illegal drug use made it hard for him to move on the subject. But the real reason is his complete moral obliviousness, the cavalier, smirking negligence about anything fundamentally serious that Bush and his all-too-familiar ilk wear like a badge of honor. These qualities, which large numbers of male voters apparently find make him more "fun" than Gore the Stiff, make it impossible for him to connect his own experiences with those of the thousands of mostly poor, often black or Latino Texans languishing in his state's singularly harsh and backward penal system. (The outrage in Tulia, where the black population was decimated by a drug sting operation, is just an extreme manifestation of the holy Drug War, Texas-style.)

Far from being troubled by any moral inconsistency, Bush breezily attacks Clinton and Gore -- who, good triangulators that they are, have tilted heavily towards interdiction and punishment and away from treatment -- for not being harsh enough on drugs. It's too bad some kind of time-warp punishment isn't available, in which the middle-aged Bush could travel back in time and personally flog his younger self with a cat o' nine tails for the moral edification of us all.

Of course drugs, even the relatively innocuous marijuana, aren't harmless. They do cause social problems. But our current hysterical and heavy-handed rhetoric and solutions aren't working -- and our leaders' refusal to even talk about alternatives reflects badly not just on them, but on our national maturity. It's time to grow up, accept that drug use will always be with us, treat responsible recreational drug users more or less the same way we treat recreational drinkers and start talking about ways to minimize the negative impact of drug abuse on the individual and society. Whether the solution is legalization, European-style decriminalization, discretionary sentencing or something else remains to be worked out. But until America starts confronting reality on this issue, we will continue to be the embarrassing teenager on the block.