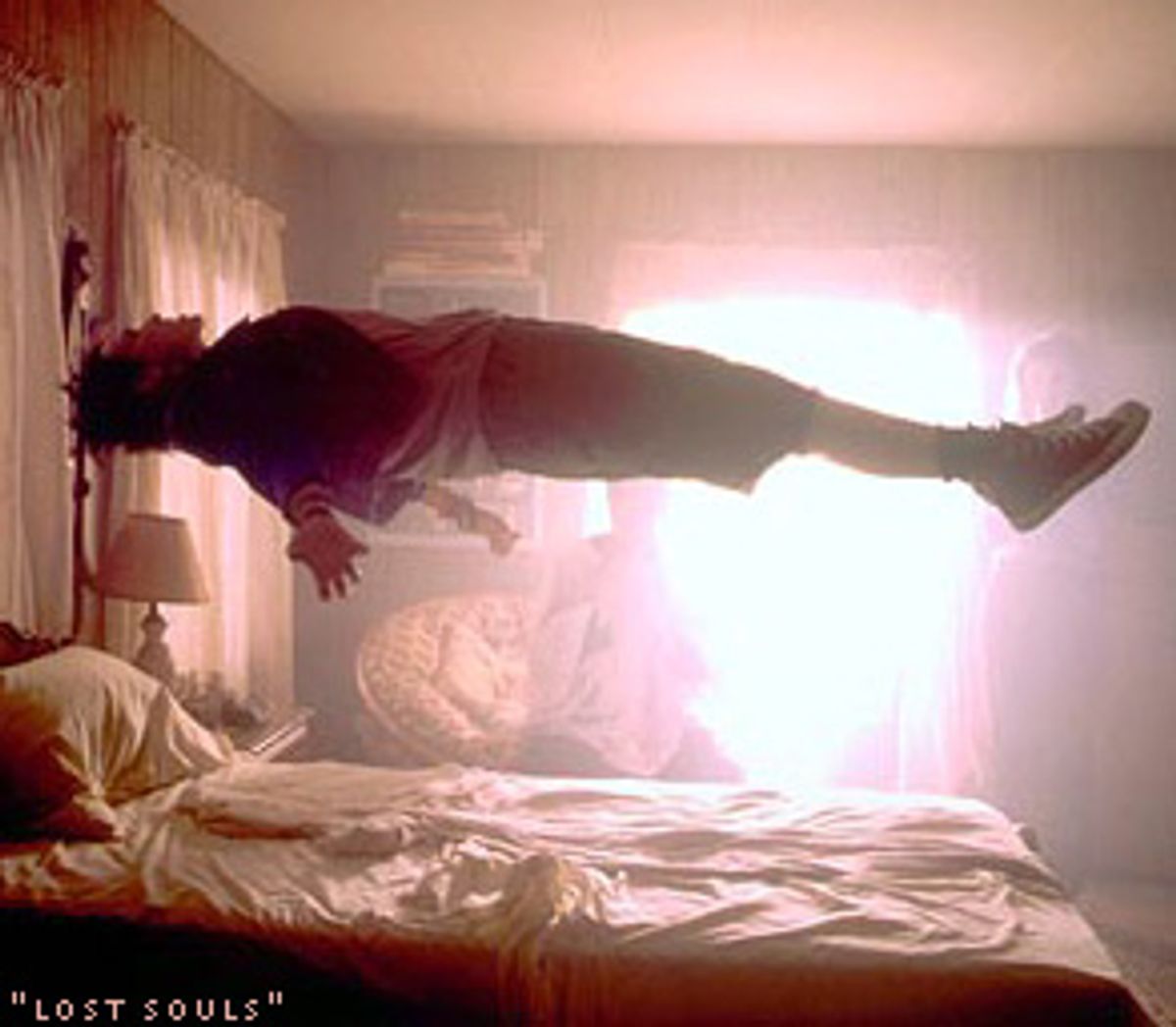 Tea-stained fabrics were big in the mail-order fashion catalogs last year; too bad tea-stained movies haven't disappeared as quickly. "Lost Souls" is a lugubrious sub-"Exorcist" demonic possession film that's absolutely no fun at all. But it's also one of those movies that looks like it was photographed through an old sock and then left in the producer's backyard through an entire rainy season. Certain scenes have been so damaged (mildew? banana slugs?) that the film's tastefully appointed interiors seem filled with dense, yellow fog. OK, this is meant to be symbolism: mankind lost in a spiritual haze, blah blah blah. But it still looks like crap.

"Lost Souls" marks the directorial debut of Janusz Kaminski, the veteran cinematographer who has twice won Oscars working with Steven Spielberg (for "Saving Private Ryan" and "Schindler's List"). It could hardly be worse. Maybe I should first try to say something about its so-called better qualities, like a creepy scene when the devil appears to the obsessive heroine, Maya Larkin (Winona Ryder), in the guise of a mean little girl, or the moment when yuppie journalist Peter Kelson (Ben Chaplin) figures out who his fiancie and family really are. But why bother? Taken as a whole, this is a disaster, a piece of mendacious Hollywood hackwork that has all the flatulent self-regard of bad European art film.

From the handheld camerawork and ominous slow motion to the gloomy photography (by Mauro Fiore) and ludicrous Catholic kitsch, "Lost Souls" virtually flings itself at the audience's feet and begs to be taken seriously. There's a scene early on when four people enter a room (to perform an exorcism, naturally) and -- I swear to God -- Kaminski rips off the image from the cover of "Abbey Road." When Peter, who may or may not be the Antichrist, is plagued by spiritual doubt, he pushes through a crowd of nuns into a church. Right away the big wooden Jesus comes crashing right off the cross, ending up upside down and face to face with him. (I guess that's a bad thing.)

Kaminski is evidently seeking to emulate such art-house creepmasters as Roman Polanski and Nicolas Roeg, and indeed much of "Lost Souls" feels like a film student's awkward homage to Polanski's "Rosemary's Baby." I'm not sure how valuable these models are in the first place, but even at their most addled (which is pretty addled), Polanski and Roeg wouldn't have produced anything this spectacularly stupid. Kaminski appears to have all their ambition and pretension and none of their talent. Many of the New York critics with whom I watched "Lost Souls" apparently found it hilarious, which paying audiences with an investment in being entertained are unlikely to do. To my taste, "Lost Souls" is too monotonous and depressing to be genuinely funny (well, except for the scene when the dashboard clock in Peter's Range Rover displays the time as 6:66).

Yes, there is a story of sorts here, but if you've seen one possessed-by-the-devil movie you've pretty much seen them all. Maya is a spooked-looking little Catholic schoolteacher with previous Satanic experience on her risumi. At some earlier point when she had shorter hair and looked vaguely butch, a crusty French padre named Father Lareaux (John Hurt) cast Old Nick out of her. With her big brown eyes and fine features framed by silky, mouse-colored hair, Ryder looks appropriately persecuted but obstinate, feminine but willful. But it's only an interesting performance compared to Chaplin's; he drifts around wide-eyed, with the haircut, heavy eyebrows and excellent Italian sweaters of a male model who is meant to convey sophistication. I have a thesis, by the way, that there's a reverse correlation between the quality of horror movies and the quality of the menswear seen in them. In really good horror flicks, careless pothead fashion predominates: The guys are teenagers in mall clothes or beefy dudes with bowling shirts and biker jackets. But when the Dolce & Gabbana turtlenecks show up, you're up Crap Creek with the likes of Janusz Kaminski.

Speaking of fashion, Hurt's appearance has assumed the most extraordinary texture in the latter stages of his anything-for-money film career. I don't mean to be judgmental; he's always watchable in his tripe roles, and every so often he'll turn up in something like "Love and Death on Long Island" or "The Naked Civil Servant" to let you know he still has a soul. But what fascinates me is his skin: In "Lost Souls" he looks more like a handbag, or a boiled bat, than a human being.

Peter is supposed to be a cynical journalist who writes about serial killers but doesn't believe in capital-E Evil. I guess he sells more books than Tom Clancy, since he can afford a leather-and-wood Soho studio with a panoramic view of lower Manhattan. But nothing that happens in "Lost Souls" is even remotely a surprise; from the very beginning, Peter is troubled by puzzling dreams, and weird stuff happens to him. When a religious wacko (Elias Koteas, who deserves much better) tries to kill him, Peter's brother expertly breaks the guy's neck. Peter: "Thanks, bro." In one of the three exorcism scenes in this movie -- which look, and sound, just about like Nine Inch Nails videos from 1994 -- Maya comes across a coded message from Satan, helpfully explaining that Peter is to be his human vessel through which he will conquer creation.

I sort of get why the devil might want to communicate in Aramaic or ancient Greek, or say things backwards in funny voices. He's the devil; he likes doing ancient-ass stuff that gives you the whim-whams. But when it's just a lousy numeric code off one of those Wheat Chex decoder rings from the '70s, I have my doubts. I don't believe for a second that the adversary in "Lost Souls" is Satan himself, or even one of his more important henchmen. We're strictly dealing here with a third-rate demon: maybe Spiro Agnew.

Fine character actor Philip Baker Hall plays Peter's uncle, a priest who raised him after his parents died and who may have a teensy little secret. Aussie actress Sarah Wynter plays opposite the English Chaplin as Peter's bony girlfriend, and can I just have a xenophobic moment here? Why does every Hollywood movie have to have one or more foreigners displaying their adroit American accents? Have we run out of actors over here? Are all those waiters in Manhattan and West L.A. happy with their jobs?

Finally, before those Satanic digits in Peter's Range Rover click over to the moment of apocalypse, I wish to take back everything bad I ever said about "Stigmata" or "The Ninth Gate" or "End of Days." No, they're still not good movies, but they all had some labored sense of fun, characters you could halfway enjoy, a little bit of splash and sizzle, however meretricious. All "Lost Souls" has to offer is fog, with some really nice sweaters.