Two and a half years later, the two men convicted of the crime still sit in prison. 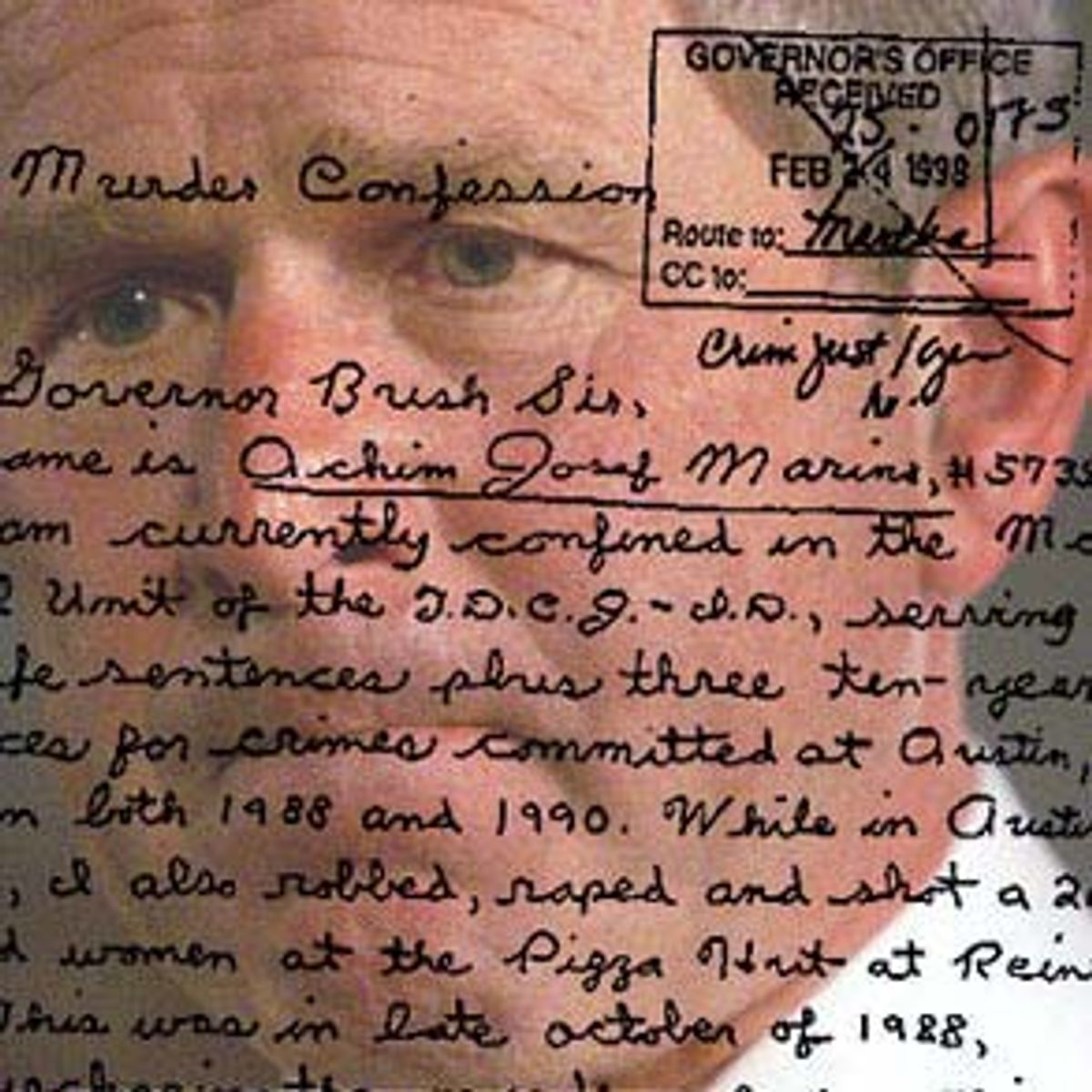 On Feb. 25, 1998, the office of Texas Gov. George W. Bush received an extremely unusual letter. Handwritten in curly script across the top of the first page, just above the salutation -- "Dear Governor Bush Sir" -- were the words "RE: Murder Confession."

In the four-page letter its author, Achim Josef Marino, a 39-year-old state prison inmate serving a life sentence for aggravated robbery with a deadly weapon, described how he had "robbed, raped and shot" 20-year-old Nancy DePriest at a Pizza Hut in Austin in October 1988. Marino explained that at the time of the murder "I was insane," and that since then he had undergone a "Christian conversion" and "spiritual awakening" and was fully prepared to be executed for killing the young woman.

Perhaps most startling about Marino's letter was his assertion that two innocent men were serving life sentences for a crime he himself committed. "Governor Bush Sir, I do not know these men nor why they plead [sic] guilty to a crime they never committed," Marino wrote, "but I tell you this sir, I did this awfull [sic] crime and I was alone."

Presented with evidence about a murder in the form of a confession and the possibility that two innocent men had been languishing in a Texas prison since 1988, what did Bush do? Nothing, according to Bush spokesman Mike Jones. Jones said the governor receives more than 1,400 letters from prisoners each year and, although he cannot recall ever receiving another murder confession by post, he insisted the letter was almost certainly not brought to Bush's attention. It was referred instead, Jones said, to the governor's general counsel and criminal justice staff, none of whom responded to Marino. Nor did anyone from Bush's office follow up on the matter with the Austin police, district attorney or, as Marino himself suggested in his letter, the two men convicted of the crime and their attorneys.

According to Jones, "no additional action was taken by us" because Marino wrote in his letter that he had already referred his allegations to the district attorney's office and the police. Bush's office took Marino at his word. "There was really no other role for the governor's office," Jones said.

Rosemary Lehmberg, first assistant district attorney for Travis County, confirmed she received no communication from Bush's office concerning any of Marino's claims. "I think I would know about that," she said. "I'm not aware of any contact."

Long after Marino wrote Bush's office, according to Lehmberg, her office finally began looking into the case. Lehmberg added that the Austin Police Department has also been looking into the allegations for "some time." A spokeswoman for the Austin police said the department does not talk about "ongoing homicide cases."

The possible existence of Marino's letter to the governor was first reported a few weeks ago on KVUE, the Austin ABC-TV affiliate. Salon was able to obtain a copy of the letter from the governor's office. (The office initially told reporters that it had no copy of the confession, before it was pointed out that the office was misspelling Marino's last name.)

Although Bush's office was under no legal obligation to turn over evidence relating to the crime, its failure to do so raises serious questions about the diligence of Texas' highest law enforcement authorities. Austin attorney Bill Allison represents Christopher Ochoa, one of the two young men whom Marino alleges were wrongly convicted for his crime. (The other is Richard Danziger.) According to Allison, Bush's office had a clear obligation after receiving the confession in the mail: "They should have turned it over to law enforcement."

Marino, who has been convicted on three charges of assault with a deadly weapon, felony possession of a firearm and sexual assault, can hardly be held up as a model of virtue. But in the conclusion of his letter to Bush, Marino took a moral position difficult to disagree with: Bush was "morally obligated to contact Dansinger [sic] and Ochoa's attorneys and famalies [sic] concerning this confession."

The disclosure about Marino's letter and the failure of Bush's office to act on it comes at a time when the governor's criminal justice record has been under intense scrutiny. In June, the Chicago Tribune reported that among the 131 men and women executed under Bush up to that point, 40 were condemned in trials where the defense attorneys presented no mitigating evidence or only one witness during sentencing, while another 29 went to their deaths based in part on testimony by a notorious state-financed psychiatrist, Dr. James Grigson, whom the American Psychiatric Association found unethical and untrustworthy.

To date, Bush has signed off on 145 executions, including several in which troubling questions have been raised. The most prominent recent case was the June execution of Gary Graham, who was convicted on the basis of testimony from a single witness, and executed even though exculpatory witnesses were never allowed to testify on his behalf.

Bush has consistently touted Texas' death penalty procedures, most recently in his Wednesday debate with Vice President Al Gore, in which he suggested that capital punishment is the best way to deal with "hate crime" homicides. Bush has stated that "there is no doubt in my mind that each person who has been executed in our state was guilty of the crime committed" and that all of his state's condemned prisoners have had "full access to the courts ... and to a fair trial."

The two men Marino claims took the fall for his crimes were not sentenced to death but to life in prison because of the peculiar way in which the case developed. But like those heavily scrutinized Texas death penalty cases, the convictions of Ochoa and Danziger raise profound questions about justice in the Lone Star State.

Ochoa's case never came to trial because he confessed to murdering DePriest. But University of Wisconsin law professor John Pray insists Ochoa's was no ordinary confession. Pray's nonprofit research group, the Wisconsin Innocence Project, undertook its own investigation of Ochoa's case last year. "Ochoa confessed because of threats that if he didn't he would receive the death penalty," Pray said. "What this says about the death penalty is that it corrupts the system even in cases where a defendant wasn't sentenced to death. It can create a situation in which an innocent person will plead guilty" to save his life. Pray, who along with Allison is one of the attorneys representing Ochoa, said his client was also threatened by Austin police officers with physical violence if he refused to confess.

Authorities in the district attorney's office would not discuss the case.

Allison said there are actually three Ochoa confessions in which "the facts kept changing" and were "getting better and better" from the state's point of view. The attorney said the confessions show how police hammered away at an apparently innocent man until they got him to say what they wanted. In the first confession, asserted Allison, "Ochoa basically said, 'Somebody else did it and told me about it. In the second confession, Ochoa's response was, 'I participated,' and in the third, it became, 'I did the shooting.'"

Fortunately for Ochoa and his co-defendant, Richard Danziger, DNA evidence from the rape of DePriest was preserved and, following requests from the Wisconsin Innocence Project earlier this year, the Travis County District Attorney's Office agreed to have it tested. Although the district attorney has not released the results of that test, Allison said he is confident they will confirm an earlier test conducted by the state's own lab that demonstrates Marino was telling the truth: that he was the one who raped DePriest. The test showed that the DNA discovered on the victim did not match Ochoa's or Danziger's. It did, however, match Marino, the new focus of the D.A.'s office. Marino's story is further substantiated by claims he made about physical evidence in his letter to Bush. Marino said that keys from the Pizza Hut and two bank money bags from the restaurant could be picked up from his parents' home. Sources close to the investigation say police did recover the evidence exactly where Marino said it would be.

According to his attorneys, Ochoa, who had no criminal record prior to his arrest on the murder charge at age 22, was afraid for years to assert his innocence because he thought prosecutors might retaliate and seek a death sentence.

Danziger, who was 18 when he was arrested while on parole in connection with a forgery conviction, maintained his innocence throughout his 1990 trial, insisting witnesses against him, including homicide detectives, were lying. He is currently confined to a prison mental institution. After his homicide conviction, he had no legal representation until Oct. 6, when the state appointed him counsel as it was considering the second DNA test of Marino.

Marino claimed on the KVUE broadcast that he has confessed the details of the murder to various public officials -- including Bush -- in letters dating back as far as 1996. The state, meanwhile, still has not appointed him a lawyer -- even though his confession could subject him to a death sentence. Refusing to comment directly on the case, assistant district attorney Lehmberg said, "He's not charged with anything for one thing; he's here from the penitentiary where he's been convicted, so there's nothing pending against him."