A landmark act passed by the Senate last week would increase protection for slaves forced into prostitution. 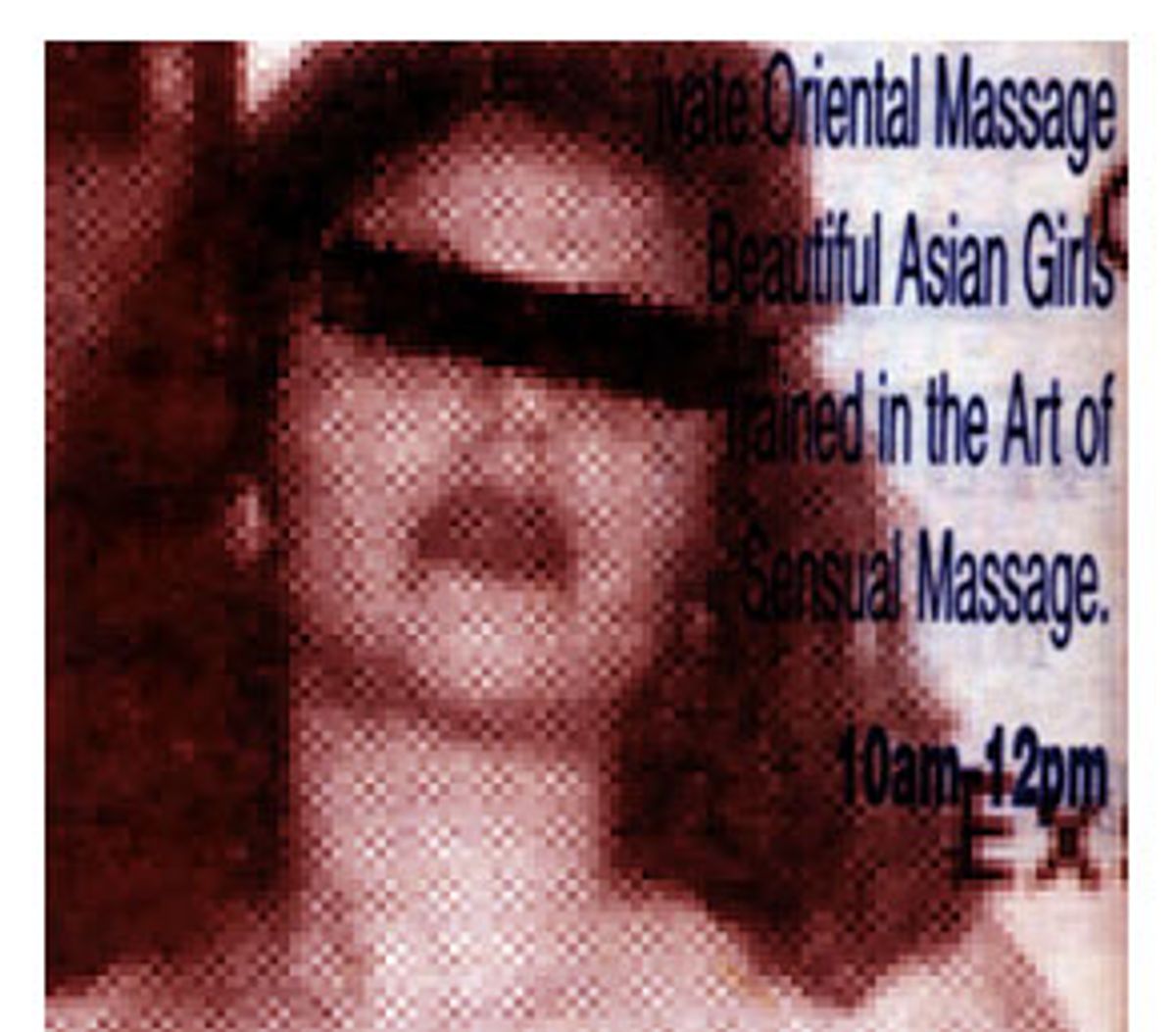 Last Wednesday, 137 years after Abraham Lincoln issued the Emancipation Proclamation, the U.S. Senate overwhelmingly passed the Trafficking Victims Protection Act, the first modern anti-slavery statute of its kind in the world. Co-sponsored by Sen. Sam Brownback, R-Kan., and Sen. Paul Wellstone, D-Minn., the legislation, which increases penalties for trafficking and establishes special visas for victims, enjoyed unusually strong bipartisan support. The Senate approved the measure 95-0, following the House, which had earlier OK'd it by a vote of 371 to 1.

The act authorizes $94.5 million over the next two years for enforcement. In addition, a provision of the measure reauthorizes the Violence Against Women Act for five years. President Clinton, a vocal supporter of that provision, is expected to sign the bill into law in the next few weeks.

According to Ann Jordan, a lawyer with the International Human Rights Law Group -- a human rights organization in Washington -- a confluence of factors helped the issue reach critical mass.

The 1999 CIA report has been a wake-up call for many. But knowledge of the trafficking problem was growing even before the report. Sen. Wellstone, for instance, told the Senate during his floor statement on the legislation on Wednesday that his wife Sheila urged him to do something on this matter several years ago. As early as three years ago he submitted a resolution in the Senate regarding the matter.

Wellstone informed his colleagues that both Jewish and evangelical groups supported the bill. "Something important is in the air when such a broad coalition of people including Bill Bennett, Gloria Steinem, Rabbi David Sapperstein, Ann Jordan and [Prison Fellowship Ministries founder] Chuck Colson work together on the passage of legislation," he said.

The bill will offer protection to domestic workers as well as the more visible victims -- the thousands of sex slaves in America's major cities. Just flip to the back of any alternative weekly paper in the country, and ads for "Soothing Oriental Massage" or "Russian Models Offer Full Release" leap out at you. Often they include silhouettes of nude female bodies, in case you somehow missed the point.

According to anti-slavery activists and government agencies, the foreign women who staff such enterprises are often the victims of organized crime groups who recruit them under false pretenses, bring them to the U.S. illegally and force them into prostitution to pay off outrageous debts.

The Los Angeles-based Coalition to Abolish Slavery and Trafficking (CAST) estimates that as many as 10,000 Asian women from countries like China, Thailand and Indonesia toil as sex workers in Southern California. The CIA believes that upwards of 50,000 women and children are trafficked to this country and coerced to work unpaid as domestic servants, factory workers and prostitutes each year. And the INS has reportedly discovered 250 brothels in 26 U.S. cities -- brothels that likely involve trafficking victims.

"This is the most comprehensive legislation which any country has ever passed regarding trafficking," says Jordan in praise of the proposed statute. "Though it could be better, it does recognize that this is a serious problem in many types of industries in the U.S. -- in restaurants and agriculture, not just in prostitution."

The legislation would provide some succor for victims of trafficking who aid law enforcement in the prosecution of their captors. Formerly, such victims were themselves subject to arrest and deportation, but now they'll be offered the opportunity to stay and work legally in the U.S. and get compensation from those who held them in bondage. Traffickers could face 20 years to life for their activities.

"The law also recognizes that the crime of servitude includes psychological torture, not just physical coercion. Traffickers tell victims that the police will be after them. They threaten them and their families with violence. These are women, and sometimes men, who are in a strange country and do not speak the native language. It's a horrendous crime," Jordan says.

Jordan says that the proposed law would have been even stronger had it not been for the objections of Sen. Orrin Hatch, R-Utah, through whose judiciary committee the law had to pass.

"It was my understanding that Sen. Hatch did not want a new law, and he had some provisions removed, including one absolutely guaranteeing that victims of trafficking will not be prosecuted for working illegally. This limited the scope of the bill. But we hope we can come back at a later date and correct this," says Jordan.

Recent incidents have heightened the profile of the issue. These include a 2-year-old Thai boy seized from traffickers in April in a scheme to smuggle women into the country from Asia. The boy, known as Got, was drugged and used as a prop to convince INS agents that the man and woman he was traveling with were his mother and father.

Also, the San Francisco Examiner reported in February that Berkeley, Calif.,'s largest landlord was under indictment for importing teenage girls from India for sex. In a similar case last year, a Silicon Valley executive was caught allegedly trying to "buy" a 13-year-old Vietnamese girl from her family in Saigon and bring her back to the U.S. as a sex slave.

And in August 1999, federal agents busted up a trafficking ring based in Atlanta responsible for importing nearly 1,000 women from various Asian countries to work in American brothels. Women from Korea, China, Malaysia and elsewhere were forced to sign contracts saying they owed their captors fees of up to $40,000. They were to work as prostitutes until their debts were paid.

These situations are only too familiar to Jennifer Stanger, CAST's media and advocacy director in Los Angeles. CAST was formed in 1998 in the wake of the infamous El Monte, Calif., slavery case where more than 70 garment workers were held prisoner behind razor wire and obliged to work in sweatshop conditions for up to seven years without pay. Since then, the organization has aided numerous women from Mexico, Cambodia, Russia, China, Burma and elsewhere.

Stanger says that women may come to the U.S. expecting to work as prostitutes or in other industries but, once here, they're at the mercy of their captors. "They're coming from really desperate economies and situations where women don't have many opportunities. Often they haven't done prostitution in their countries of origin. But they agree to it to get to the U.S. and because recruiters paint an attractive picture for them. Once they get here, they learn they're in debt-bondage, which is a form of slavery," Stanger says.

Stanger describes working with four young Mexican women recruited by a small Cambodian criminal organization. The women ranged in age from 13 to 20 and were illegally brought to Long Beach, Calif., with the understanding that they would work as prostitutes for a few months and get paid when they returned home. Three of the women had children to support, which Stanger says explained their willingness to be prostitutes for a short period of time.

At the Long Beach brothel, they were kept under guard and told they had to work for the Cambodians for free. They were not allowed to turn down clients, even if they were having their periods or unwilling to turn a trick.

"These four girls were together when the INS got a tip off in 1999 and busted up the brothel," says Stanger. "Three of them had only been there a few months, but one had been there for five months and was not being allowed to go home."

The ringleader of the Cambodian gang was prosecuted, and the women eventually fled the country, according to Stanger. But under the new law, she believes they might have been able to stay. Stanger also described several other cases, like one involving an Indonesian woman held as an unpaid domestic servant for two and a half years until repeated rapes by her boss -- a wealthy Indonesian man -- drove her to write a desperate letter in broken English that eventually made its way to the local sheriff. Her tormentor was tried and prosecuted, and she's since been allowed to stay in the U.S. in a sort of legal limbo. Stanger hopes the new legislation will help her and the other women suffering from forced servitude.

"There are all of these organized crime syndicates involved, which are very powerful in L.A. and elsewhere -- Russian, Thai, etc. That's why we're really praying that this legislation is going to be helpful to the women we work with," she says. "Everyone's calling it a model for the rest of the world. We'll see. I consider it significant, though. People should know this is going on in the house next door. That Indonesian woman was being held by a man in Palos Verdes, which is a wealthy community. That's pretty shocking -- to think that's happening in America."