With "The Amber Spyglass," Philip Pullman concludes the epic, heretical fantasy that began with "The Golden Compass." 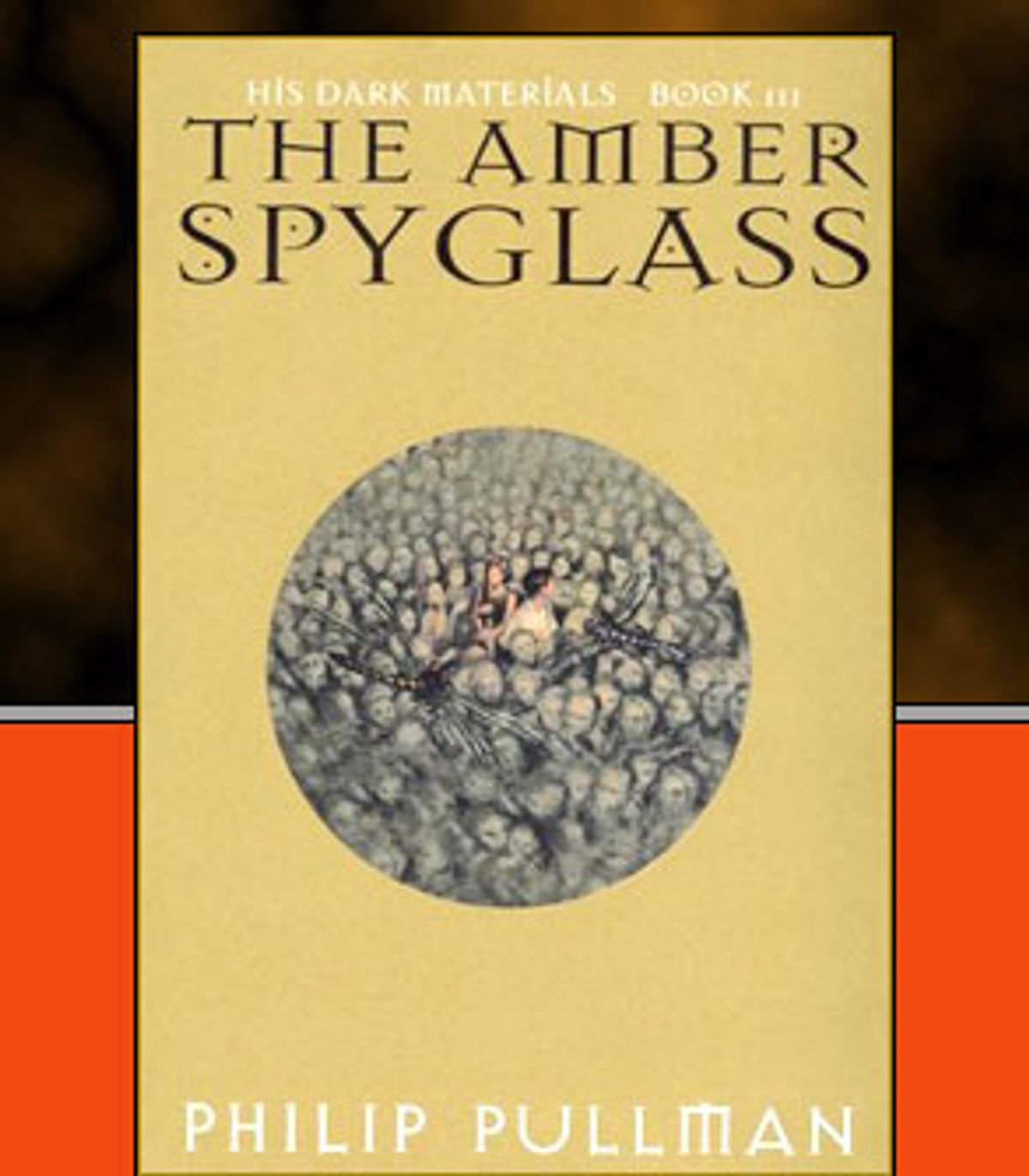 It hasn't been a great time for allegory, that tricky form in which meaning rummages through the trunks of the subconscious for mask upon mask. Current literature tends toward the literal. Prose readers who hanker for the latest versions of the strange, symbolic dramas of Edmund Spenser or Revelations must seek them, for the most part, in genre ghettos: children's books, science fiction, horror or fantasy.

"The Amber Spyglass" is the final book in the most ambitious allegory being published today, Philip Pullman's "His Dark Materials" trilogy. With epigraphs from William Blake, Rainer Rilke and John Ashbery, and tributes to John Milton and Henrich von Kleist in the acknowledgments, Pullman places himself in a tradition of serious symbol makers, which might be expected to intimidate the children to whom the series is directed (or, at least, to whom it was directed when he began it). But while Pullman may have become caught up in adult theology -- and while he has won more grown-up readers with each "Dark Materials" book -- he keeps the swooping plots and passionate characters that make his earlier books so appealing to young readers.

With fantasies, as with mysteries, the hardest part to get right is the end, where everything is revealed. The magical objects and unexplained forces that flourish in the genre easily lend themselves to anticlimax, disintegrating into mere mechanics or bluster once the author attempts to explain them or tie them together in the traditional apocalyptic battle at the end. Given the delicious promise of the first two "Dark Materials" books, some disappointment was almost inevitable. But "The Amber Spyglass" delivers surprisingly little of it; the latest novel is nearly as satisfying as the first two.

Each volume revolves around its title doohickey, while introducing child heroes, magical universes and mythic creatures. In "The Golden Compass," the object is a mechanical device for seeking spiritual as well as physical direction. It belongs to young Lyra, an apparent orphan who lives among dons in an Oxford that somewhat resembles our own. In her world, though, people come in two parts. Everyone has a daemon -- a talking animal companion that's born with him and vanishes when he dies. It's sort of like getting to keep your soul as a pet.

Children's daemons can change shape at will, flitting from butterfly to dog to mouse, but once you hit adolescence your daemon settles into a fixed form that expresses your essence. Daemons are Pullman's best invention. Everything about them seems exactly right, from their childhood mutability, to the fact that your daemon is always the opposite sex, to the way the daemon-person pairs echo and enhance each other. People and their daemons stick close to each other; the only folks who can spend more than a few moments apart from their daemons are witches. When Lyra discovers that someone's kidnapping children -- including her best friend -- she sets off on a quest that carries her to the far north, home of witches and armor-clad bears.

"The Subtle Knife" introduces a new hero from our own world, Will, whose physicist father vanished mysteriously years ago. When sinister men come looking for his father, Will knows they're threatening him, too. An urgent sense of danger propels him through a window into another world, where he finds Lyra and another of Pullman's wonderful inventions: the title object, a knife so sharp it can cut through the substance that separates universes -- and can kill daemons and angels.

Pullman certainly does good villains. There's the seductive Mrs. Coulter and her daemon, a golden-furred monkey who likes to pull the wings off bats; the evil bureaucrats on the Oblation Board who calmly commit atrocities like cutting off children's daemons in the name of scientific research; the Specters, wispy, floating horrors that feed on the souls of adults but are invisible and harmless to children. One fanatical priest, with a green, iridescent beetle for a daemon, demonstrates Pullman's excellent grasp of institutional evil. He volunteers for a murder mission (with Lyra as the prospective victim), urging his practice of "preemptive penance" as a qualification:

Preemptive penance and absolution were doctrines researched and developed by the Consistorial Court, but not known to the wider Church. They involved doing penance for a sin not yet committed, intense and fervent penance accompanied by scourging and flagellation, so as to build up, as it were, a store of credit. When the penance had reached the appropriate level for a particular sin, the penitent was granted absolution in advance ... It was sometimes necessary to kill people, for example; and it was so much less troubling for the assassin if he could do so in a state of grace.

By the time Pullman reached "The Amber Spyglass," he seems to have run out of steam on the doohickey front. The title object, a device for seeing Dust -- the elementary particles of consciousness, golden specks that adhere to anything touched by a conscious being and are themselves conscious -- plays only a very minor role in the plot. However, Pullman has mustered a spectacular array of forces in a three-sided battle for control over the universe of universes.

Authors of fantasy -- children's books in particular -- frequently raid the religious myths of other cultures to supply their stories with depth and power: think of J.R.R. Tolkien and Norse myths, or Susan Cooper and religions of ancient Britain. Some borrow respectfully from their own sacred traditions -- C.S. Lewis, for example, turned Jesus into a lion in the "Narnia" books. But Pullman takes a page from Blake, stealing characters out of the Judeo-Christian tradition, then switching the meaning of the roles. Like the gnostics, he raises hidden possibilities in the familiar story. Is God really the creator? Is the creator good or evil? Did the rebellious angels perhaps have a point, as America's own Founding Fathers? Complex celestial politics, in which from time to time heroes betray their friends and villains save the day, add a frisson of heresy to the usual battle of dark and light.

In Pullman's world, angels are long-lived and bodiless, but not necessarily immortal. As Lyra's father, a powerful and ambiguous figure, explains it to a henchman, "Few as we are, and short-lived as we are, and weak-sighted as we are -- in comparison with them, we're still stronger. They envy us, Ogunwe! That's what fuels their hatred, I'm sure of it. They long to have our precious bodies, so solid and powerful, so well-adapted to the good earth! And if we drive at them with force and determination, we can sweep aside those infinite numbers as you can sweep your hand through mist. They have no more power than that!" This weakness of angels can be comical, as when Will bosses around an enormously old and wise pair, or profoundly sad.

Lyra and Will's adventures include a trip to the Underworld, complete with the ferryman of the dead and harpies guarding the gates. There Lyra meets her own personal death, and the children harrow hell, releasing the spirits. But ultimately, to save the world and establish the Republic of Heaven, they must make the ultimate sacrifice.

That's where I felt a bit of disappointment sneak in. To make all the equations work out, Pullman has to introduce sexuality in characters that I felt were still too childlike for it to be convincing. He shuts doors and ties up loose ends in a way that feels, for the first time, slightly artificial. Still, that's a very minor flaw in what stands with "The Lord of the Rings" as one of the most resonant fantasies of our time.