"It's just something on paper" 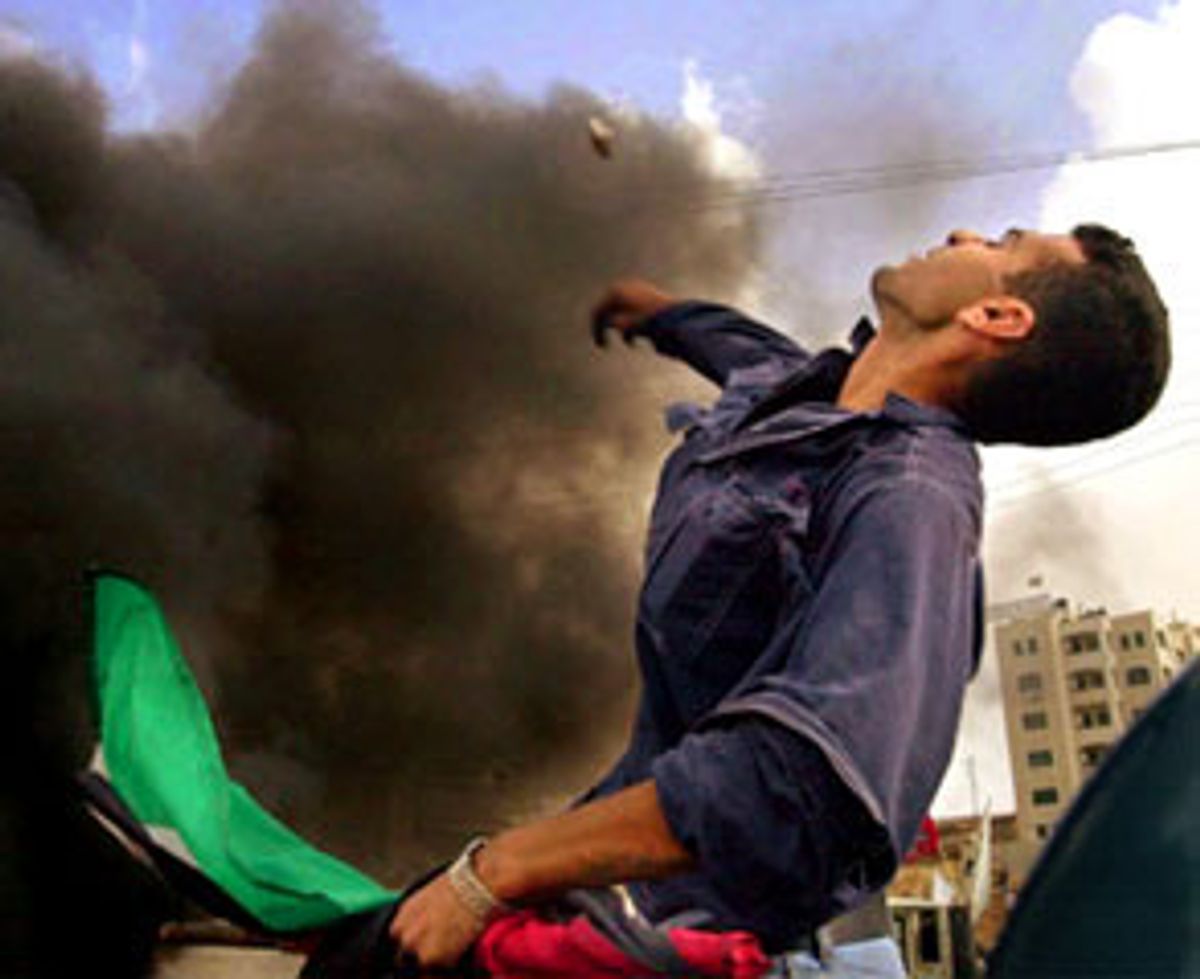 At the idyllic Red Sea beach resort of Sharm El-Sheikh in Egypt Tuesday, Israel and the Palestinians agreed to take "immediate, concrete measures" to end the escalating violence that has left more than 100 people dead and thousands more wounded in recent weeks.

But it's not what happened in Sharm El-Sheikh that most concerns Israelis and Palestinians. It's what didn't happen.

After Clinton announced the deal, Barak's spokesman issued a press release stating "the goals of the Sharm El-Sheikh conference have been achieved." But those words convinced no one in the wrecked streets of Palestinian towns, the fortified settlements of the West Bank and Gaza or the shopping malls of Israel, half-deserted by shoppers weary of terrorist attacks.

"It's just something on paper, that's it," said Hussam Shaheen, International Secretary of Arafat's Fatah Party youth organization. "I don't think it will change anything on the street because the Palestinian people don't trust paper anymore. The main problem is political and they only talked about security," Shaheen said.

The Palestinians had been demanding a full international inquiry into the causes of the recent unrest, but the Clinton-brokered agreement fell short of that desire. It established instead a loosely defined fact-finding committee, which will be set up by the U.S., the Israelis, the Palestinians and U.N. Secretary-General Kofi Annan.

Clinton's statement also called for a return to the "situation that existed prior to the current crisis," a Camp David status quo that was deeply unsatisfactory to the Palestinians and, beyond Ariel Sharon's perceived provocation on Sept. 28, the underlying cause of the current unrest.

"It's very difficult to ask people to calm down because nothing has changed on the ground," said Shaheen. "The people will listen to the facts not to statements."

Although the agreement at Sharm El-Sheikh called for both sides to issue public statements unequivocally calling for an end to the violence, Arafat made no such call upon his return to Gaza. An end to "incitement" also went unheeded, as Palestinian television continued to broadcast the same martial songs and slow-motion footage of funerals and marches before and after the announcement.

The sounds in the street were unchanged too. Various Palestinian political factions and militia leaders vowed to continue the fight. "This agreement is not binding," said Sheikh Ahmed Yassin, the spiritual leader of the militant Islamic group Hamas, "because it is imposed from America and Israel on the Palestinian people and does not represent the demands of our people and we will continue in resisting the occupation."

"This intifada started for Al-Aksa (the revered Jerusalem mosque). But today it is an intifada for independence," said Shaheen.

Thousands of Palestinians marched Tuesday against the idea of a cease-fire agreement, despite the fact that the overwhelming majority of casualties in the current crisis have been on the Palestinian side. On the contrary, those human losses fuel a need for revenge or, at the very least, real political gains. In the minds of Palestinians, if life returns to what it was before the violence erupted, it would mean that 100 Palestinian lives were sacrificed in vain.

In this context, "Arafat is not going to put himself at risk," said Shaheen, by going against the will of his people and calling for an end of hostilities as long as basic Palestinian aspirations aren't met.

The continuing violence on the ground Tuesday seemed only to reinforce the views of those who see in the Sharm El-Sheikh agreement a mere face-saving exercise on the part of a U.S. administration that has invested tremendous energy in the past in devising a Middle East peace deal. A Palestinian who was reportedly picking olives near a settlement in the West Bank was shot dead by a settler. An Israeli policeman was critically wounded in a gun battle on the outskirts of Jerusalem. And a Palestinian policeman died of a bullet wound in Gaza.

The disconnect between the summit talk and the continuing bloodshed on the streets once again raised the question of how much control Arafat and Barak have over the extremist fringes of their respective societies.

Efraim Inbar, director of the BESA Center for Strategic Studies at Bar-Ilan University believes there is a risk of "Lebanonization" in the Palestinian territories, whereby the proliferation of militias in the West Bank and Gaza will entirely escape Arafat's control.

But Yaron Ezrahi, an Israeli political scientist, was more optimistic. "The moderates [on both sides] have lost a lot of strength recently. But the moderate part of the public also realizes now what the world would look like if extremists took over."

"The victory of extremists in the [Israeli-Palestinian] conflict has been more and more short-lived in the past 20 years," noted Ezrahi. "It looks catastrophic on television but the majority of the public really does not want to take this course. That's why it takes the form of explosions and is not a sustainable course. The general trend is not towards war but away from it."

At the same time, conceded Ezrahi, "much of the support for a peace agreement with Arafat has been lost over the past two weeks." The Israeli willingness to actually sit down at the negotiating table with the Palestinians for a new round of talks, Ezrahi said, has been very much shaken by the scenes of rage and hatred played out daily in the West Bank, Gaza and Israel.

Yossi Klein-Halevi, an Israeli journalist who writes for the Jerusalem Report, says he believes he is among a majority of his countrymen who are convinced "we're not going to get peace, no matter what we do."

"We've moved from a peace process to a cease-fire process," Klein-Halevi said. "It's not land-for-peace anymore," he said, referring to the peace formula agreed upon seven years ago at Oslo, "it's land for cease-fire."

The consequences of that conceptual shift could be far-reaching. "If the goal is a separation of forces rather than 'a just and lasting peace' -- and all that Oslo nonsense, then Israeli policy needs to be fundamentally reexamined," he said.

"First, we need to consider a unilateral withdrawal to borders that are defensible, that will ensure maximum separation between Palestinians and Jews and guarantee some sort of Palestinian sovereignty. At this stage of the conflict it would be suicidal for Jerusalem to be divided into two entities that don't get along."

In order to achieve this unilateral withdrawal, which would inevitably mean uprooting small settlements in the occupied territories and transferring settlers to a few larger settlement blocs, Israel needs to be united behind a broad coalition government, added Klein-Halevi. "In the end, the insights of the Israeli left and the Israeli right were both correct: We can't occupy the Palestinians. And Arafat is an unfit partner for peace."

In the end, said Klein-Halevi, Israel will need to implement the vision Barak outlined during his campaign a year ago, which is to accept the creation of a Palestinian state, withdraw from most occupied territories and keep a united Jerusalem under Israeli rule. "The only difference is that we won't get a peace agreement in exchange, we'll get a cease-fire," he said.