What we do in private 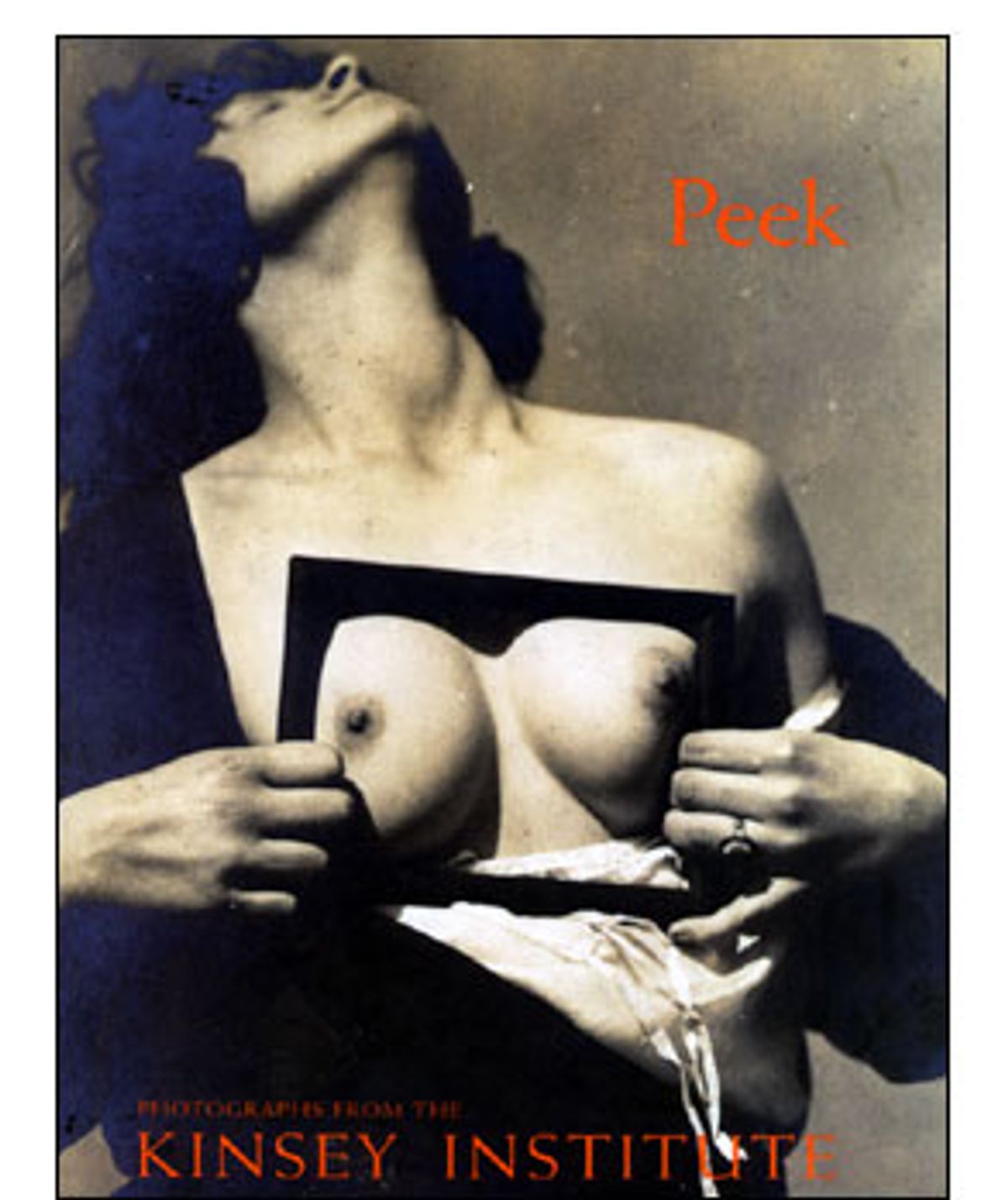 You really can tell a book by its cover. One look at "Peek," a fascinating glimpse of the Kinsey Institute's photography collection, and you know it's true. What you see on the cover is what you get in the book.

And what you get is tits and ass, Kinsey style.

Kinsey's work forced people to see the dichotomy between their beliefs and their actions. Everybody assumed, for example, that most women were virgins when they married, yet Kinsey's surveys revealed that 50 percent of women were doing the hoochie-koochie before they got hitched.

Kinsey scandalized the country, and the only reason he wasn't dismissed as a crank is that he walked and talked like he had a cork up his ass. This was a buttoned-down professor of biology at a Midwestern university, after all; a scientist who brought rigorous discipline to the 18,000 interviews his team conducted for the studies.

True to form, puritanical America treated Kinsey's work with the same kind of hypocrisy it reserved for sex: It denied his findings in public and practiced them in private.

It's this schism in the American sexual psyche that "Peek" captures so brilliantly, especially in the women it portrays.

If you used a sheet of paper to cover the photographed women from the neck down, in most cases you couldn't possibly guess their bodies were naked, or that the women wanted to be or were about to be shtupped. Page after page after page, the facial expressions of these women do not come close to matching the sexual posture of their bodies. You'd expect to see some expression of lust, ecstasy, desire -- anything to show us a spark of libido.

But you don't. And the fact that you don't perfectly captures the Madonna (face)/whore (body) dichotomy and the "nice girls don't, at least not in public" mentality of the age -- most of the photographs in the book were taken between the 1880s and the 1960s.

True to Kinsey's discovery, the photo collection reflects the full spectrum of human sexuality. The good, the bad and the ugly meet the thin, the fat and the snuggly. Straight and gay, male and female, chocolate kink and plain vanilla -- you name it, it's in the book in one way or another.

There are 125 black-and-white photos in this remarkable collection, representing both amateur and professional photography. That they exist at all is a surprise to many. Kinsey did not broadcast the fact that he collected erotica, because people already thought something was not quite right about Professor Pervert. That's all he needed -- an already suspicious public hampering his work over a couple of beaver shots.

His attempts at collecting erotica faced huge obstacles. Federal obscenity laws and public codes of morality blocked him at every turn. If Uncle Sam said, "I want you," the government was afraid cousin Alfred would twist it to mean "... in the worst way." Finally, in 1950, when a customs official confiscated a package from Denmark, Kinsey took the customs bureau to court and, well, sued the pants off them.

When the press got hold of the case, they tarred and feathered Kinsey. The headline in Kinsey's home paper blared, "'Science,' Says Kinsey: 'Dirty Stuff,' Says U.S.'"

Could Kinsey legally import sexual images for scientific use? Yes, the court ruled, but with one proviso: No drooling allowed. Fifty years later, the Kinsey Institute became the proud owner of perhaps the largest collection of erotica in the world. "Peek" might have 125 pictures in it, but the collection houses 75,000. "Peek's" pictures are meant for public consumption, but professional photographers will get a chuckle out of its insider references, according to Dennis Darling, director of photography at the department of journalism in the University of Texas in Austin.

Darling thinks the wittiest is a takeoff on English photographer Eadweard Muybridge, famous for settling a controversy in horse-racing circles as to whether a trotting horse ever had all four feet off the ground at the same time. Muybridge used a particular kind of motion grid in his photographs of the racing horses. So does a certain picture in "Peek." But instead of showing hooves pounding the ground, it shows a man pounding his meat.

Darling paraphrases French photojournalist Henri Cartier-Bresson in describing one of "Peek's" allures: "There is no such thing as a bad 40-year-old photograph." Darling's right. The accouterment of an age gone by is a compelling feature of "Peek." Sure, you see a woman giving head to a guy, but eventually your eye wanders and you notice the guy's wearing garters to hold up his socks. Who the hell wears garters when they're getting blown? Exactly Darling's point.

"Peek's" main failures, as with everything that documents sex, are the academic gasbags that come with it. Do we really need long-winded prefaces and prologues by chardonnay-swilling intellectuals who can't say gesundheit without a dense dissertation on sneezing?

Well, of course we do. It wouldn't be a Kinsey product if we didn't. After all, it was Kinsey who put the yawn in spawn. Still, it really rankles to see such compelling pictures bookended by such boring treatises. And to make matters worse, the four academics were too busy pontificating to give readers a little background on the pictures.

If you want to know more about the stunning (and I mean stunning with a capital Pant) cover picture, or any picture for that matter, good luck trying to find it. Where is the information, the history, the context, the photographer's intent, for the pictures you want to know about? The academics were too busy with the Q&A to bother with the T&A.

Still, "Peek" will pique your curiosity. It's an eyeful, a mouthful and, ultimately, a masterful photographic depiction of human sexuality.

Its collection of snapshots and professional photography of the nearly naked, the fully naked and the please-God-don't-let-them-be-naked is slyly compelling. Like sex itself, the photographs span the human experience from carnality to frivolity. As Kinsey would never have put it, the book is a hunka-hunka burnin' love.