This weekend, pumped-up players from across the globe engage in a battle royal to win a not-so-fabulous fortune in the mother of all board games. 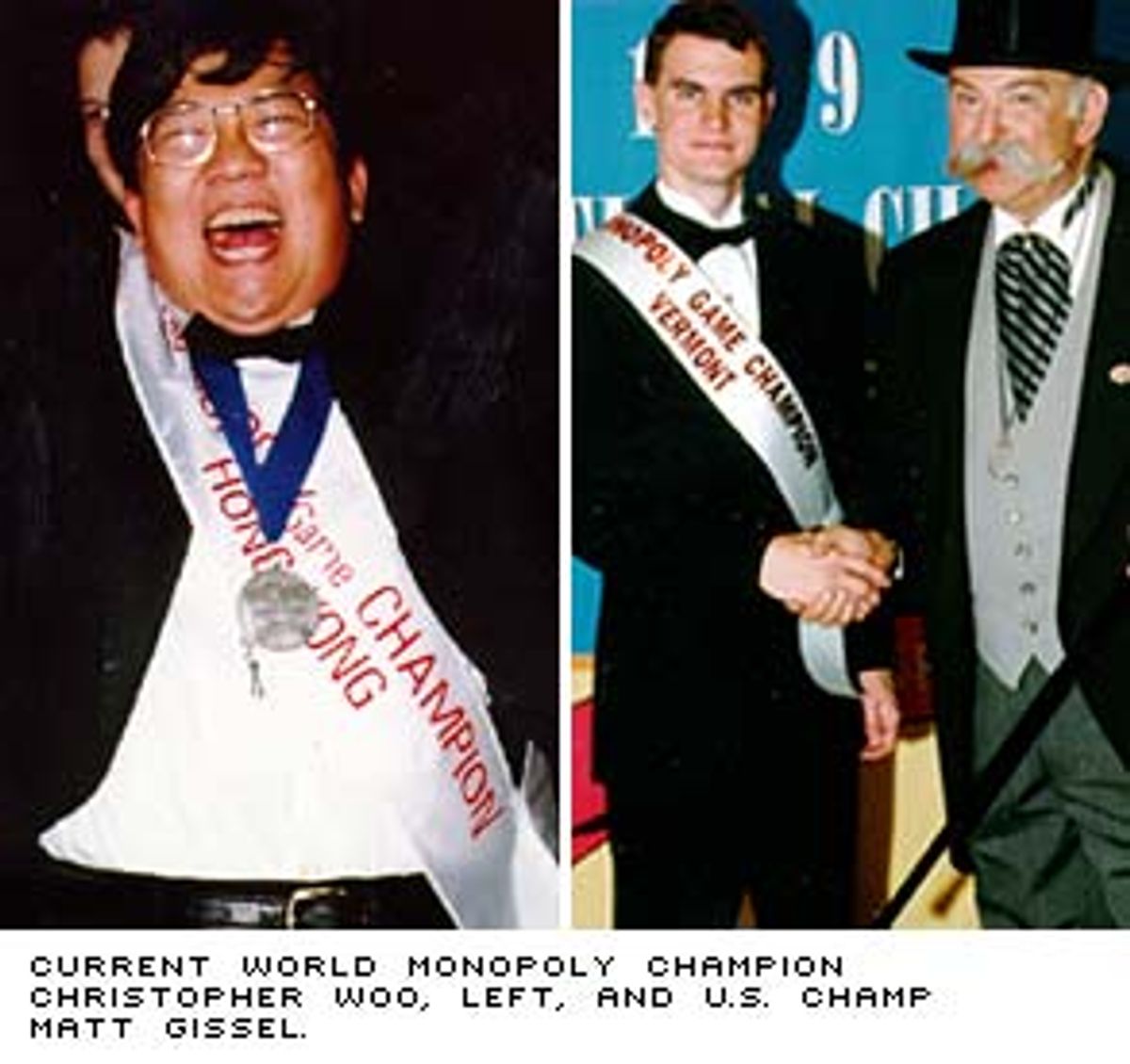 Forget the Olympic Games. The most inclusive international quadrennial competition is the World Monopoly Championship. After all, more than 500 million people worldwide have played the game -- a tad more than are involved in, say, competitive trampoline. Toronto hosts the 11th such event this weekend.

America's chances rest with 21-year-old national champ Matt Gissel, a laid-back university student majoring in biochemistry. The United States hasn't had a world titlist since 1973. Starting Saturday, Gissel goes up against the current world champion, 40-year-old Christopher Woo, a teacher from Hong Kong, and more than 30 other national champions. The youngest is a 14-year-old from Trinidad and Tobago and the oldest is a 53-year-old father of three from Spain.

Monopoly, invented in 1933, came to fame during the Depression as American families lived vicariously through the world of Uncle Milton Pennybags, the game's mascot (who, according to game manufacturer Hasbro, collects pennies, avoids the luxury tax and enjoys strolling on Boardwalk).

The game is sold in 80 countries and has been translated into 26 languages and currencies. It has also gained an odd collection of fans -- who play Monopoly in the strangest places and for extremely extended periods of time.

In 1983, the Buffalo Dive Club played for 1,080 hours underwater. Some 350 divers took turns to keep play going for 45 consecutive days. A group of high school students in New Mexico once played for 99 hours in a water-filled bathtub. And one game was played in a moving elevator for 16 days.

Players have also adjusted the game's physical size through the years. In 1987, students of Juniata College in Huntington, Pa., turned part of their campus into a Monopoly game board larger than a city block. Giant foam-rubber cubes became dice, and cyclists with walkie-talkies kept players informed of opponents' moves.

The heaviest Monopoly board -- 95 pounds -- was made in 1964 specifically for underwater use. Neiman Marcus once had a game made out of chocolate that sold for $600. And a $25,000 set made for tobacco king Alfred Dunhill boasted solid gold and silver houses and hotels.

Since Monopoly has such intense fans, it was no surprise when hundreds of them showed up in Atlantic City, N.J., in 1972 to block changes to some of the local street names that the game uses. To help upgrade the city's image, the gambling haven's City Council had proposed changing Baltic and Mediterranean avenues to Fairmont and Melrose, respectively. But after players flew in from around the country to attend the public hearing and mailed thousands of letters, the street names remained intact.

U.S. champ Gissel prefers his Monopoly straight up: on a table, in the house. The pro wrestling fan from St. Albans, Vt., started playing Monopoly in fourth grade, just fooling around with his dad. In sixth grade, Gissel noticed that the local library was hosting a Monopoly competition during his April vacation. "It was just something to do," he says.

It became something to do every year during his April vacation. From 1993 to '97, Gissel led the state in total Monopoly properties and assets earned. And so Vermont crowned him state champ and sent him to the national championship in Las Vegas, all expenses paid.

"It was surprising," Gissel says of the phone call informing him of his champion status. "I had forgotten about it. Then I came out of shock."

And so he prepared for the ensuing battle: "Before I went, I played my college roommates twice and lost both games. It didn't worry me. I figure each game is different and sometimes it doesn't work. As long as I win when it matters."

This weekend's tournament consists of four rounds. Players accrue as much capital as they can in three 90-minute preliminary games. The five players with the most moola at the end head to the final game, played on Monday. This match has no time limit -- it's played until only the winner remains.

It took Gissel just two hours to bankrupt his fellow contestants at the 1999 national championship. In the final round, his father, brother and sister huddled around the game table to follow each roll of the dice. His mother waited outside, too nervous to watch. "It was intense," says Gissel.

His strategy? "I try to get the railroads. If you get all four of 'em, you're just sucking money away from the other people. There's always a chance to land on them." An added bonus: The B&O Railroad is one of the three most-landed-on board positions. The other two are Illinois Avenue and Go. "And then I get at least part of as many color groups as possible. Other than that, you just kind of work with what you got."

Both Woo and Gissel say that maintaining a good relationship with the other players is key to their strategy. "It's important to not be a jerk," says Gissel. "And when you're negotiating, try to let them see how it benefits them. For example, if you're in the final round and only one person has a monopoly, that person is going to win and it's a matter of you and the other people getting desperate and working together against that other person. It's sort of like 'Survivor.'"

In Toronto, competitors will be using a Canadian-themed board. Generally, Gissel prefers playing with the thimble and Woo the top hat, but the pair will have to choose new tokens for this weekend's competition -- Canadian icons such as a moose, a sled and a hockey player.

Woo, though, isn't taking any chances. He'll be bringing along the lucky marble he found just before winning his national champion title.

Gissel doesn't have any lucky items. He's just ready to go for broke. "I understand the game pretty well," he says. "When we sit down, I figure I have as good a chance as anyone to win."

The winner takes home a top-hat-shaped trophy and $15,140, the amount of fake cash in every Monopoly game. When asked if he thinks he has picked up any practical applications for the real world by playing Monopoly, Gissel says, "Uh ... I don't think so."

Mark Miller is a writer in Brooklyn, N.Y. He has written for ESPN magazine, MTV.com and the Washington Post.