Haley Joel Osment's mom keeps a bottle of vodka in the chandelier. You would too with a demonic, passive-aggressive, New Age munchkin trying to run your life. 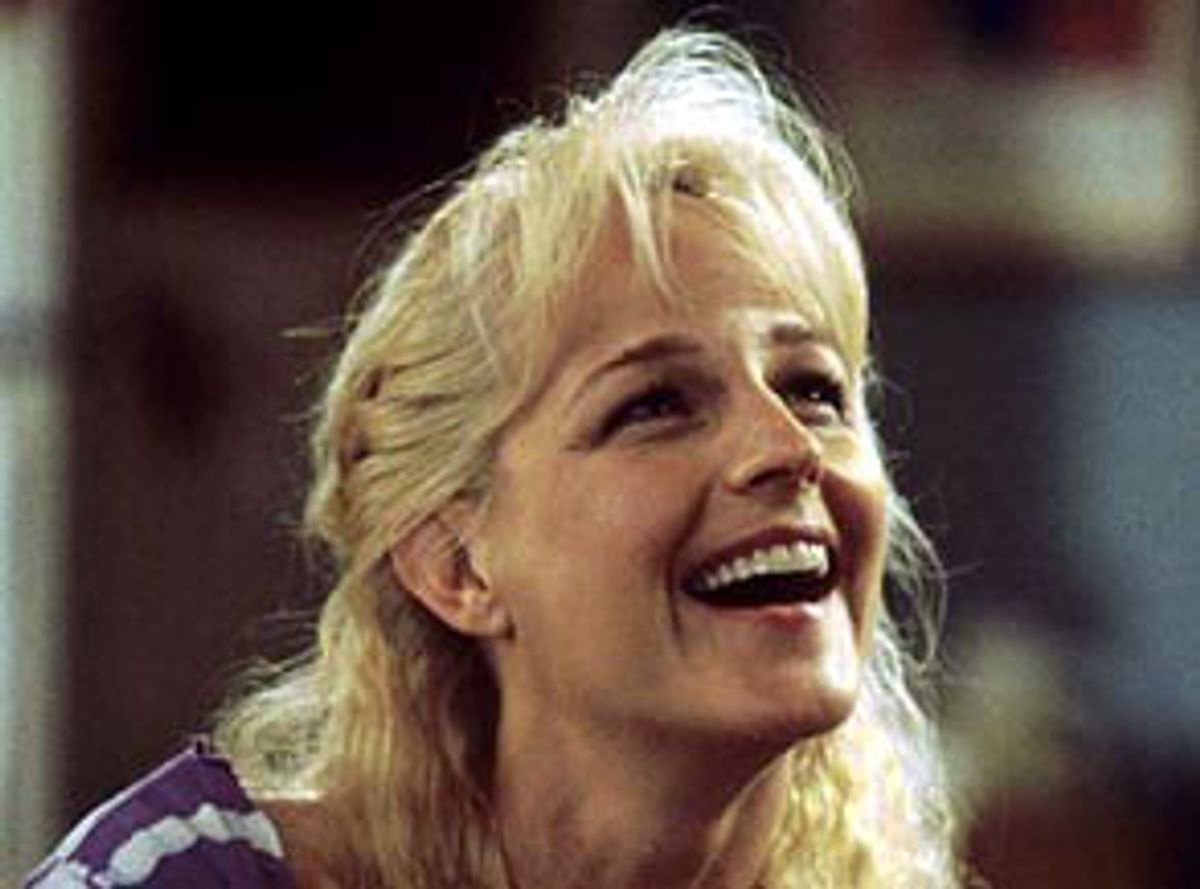 How can a love story featuring two of Hollywood's most appealing stars be so excruciating? Partly it's because "Pay It Forward" marks a newly evolved brand of cynicism: high-concept moviemaking with one eye on next year's Oscar ceremony and the other on the prime-time newsmagazines. A perfectly acceptable romance, with Kevin Spacey and Helen Hunt as wounded misfits who find each other in Las Vegas, gets fatally slimed by the parallel story of an angelic little kid (Haley Joel Osment, the tyke from "The Sixth Sense," playing Hunt's son) who sparks an underground altruism craze.

I think the filmmakers picture themselves on TV, dressed in classy Prada suits and discussing Relevant Social Issues with Stone Phillips: "Can individuals really make a difference in these troubled times? The movie that's sparked a surprising movement for a new personal morality, next."

Even that may be giving "Pay It Forward" too much credit. It doesn't have anything to say about ethics or idealism, even by MSNBC standards. Without its stars, it's an insultingly shallow weeper-of-the-week that would make a Lifetime executive blush. Furthermore, its falseness runs deeper than a lame stab at being meaningful. This brightly colored fable from "Deep Impact" director Mimi Leder (the screenplay is by Leslie Dixon, from a novel by Catherine Ryan Hyde) professes a sentimental adoration for children, but there's a hysterical edge to that adoration that makes it feel like something much darker. Essentially, "Pay It Forward" is a paranoid Christian fantasy in which the world is a place of evil and ugliness that demands to be purified through the sacrifice of innocents. I wasn't much of a Catholic even as a kid, but I recognize a hagiography when I see one.

Maybe cocktail waitress Arlene McKinney (Hunt) and schoolteacher Eugene Simonet (Spacey) would never have found each other without the intervention of Arlene's son, Trevor (Osment), a seventh-grader in Eugene's social studies class. But how long they can stand to be in the same house with this impish know-it-all is another question. The most satisfying moment in "Pay It Forward" arrives when Arlene hauls off and pops Trevor one after he tells her, "I hate the way you look! I hate the way you smell! I hate that you're my mother!" The movie's portrayal of the relationship between children and adults is so confused it's hard to say who's abusing whom. And at least it shuts up the little creep for a while.

Hunt has imported her "struggling single mom" shtick pretty much intact from "As Good as It Gets" (an awfully similar movie, truth be told) and it still works, though I'm not exactly sure why. In that movie she played the only impoverished WASP in the entire borough of Brooklyn, N.Y.; here she's the only white woman in Las Vegas under age 80 who rides the bus.

With her frizzed-out hair, skimpy outfits and trailer park makeup, semirecovering alcoholic Arlene looks like Erin Brockovich after a three-day bender. She probably lives next door to Nomi, the heroine of "Showgirls." But amid all the phony trappings of movieland working-class life, there's so much that's genuine about Hunt as a performer -- her screwball klutziness, her desire to be liked, her slightly frayed sex appeal -- that I couldn't resist Arlene for more than a few seconds. Watching competing emotions work their way across her face (approximately: "I like this guy. What's wrong with him? What's wrong with me?") while Eugene summons up the courage to ask her out is worth the price of admission all by itself.

As ever, Spacey plays an off-center guy with a secret. In this case it's not an interesting secret or an especially well-concealed one, and for all Spacey's uncanny physical work Eugene remains a cipher. In the first scene we see him ironing his own shirts, and that's about as much character insight as we ever get. Eugene is a lifelong loner with an untended haircut who wears shabby suits with running shoes and likes to show off his collegiate vocabulary. (Words like "atrophy," "exigent" and "euphemism" stick out in a Vegas middle school.)

In short, he's the inscrutable, noble and damaged hero of a romance novel, rather than an actual human male. As far as we or Arlene can tell, he's a virgin. We know he's scarred because, well, he's scarred. Duh! His face is marked with mysterious burns, like Jane Eyre's boss after the fire. When Trevor asks what happened to him, Leder's camera abruptly slips sideways, just in case we hadn't noticed that this is an important question.

For the film's moral to have maximum effect, Leder has to make the world a perhaps more dangerous place for children than it really is. "Pay It Forward" is imbued with a Reagan-era anxiety about random violence that seems derived from "Unsolved Mysteries" and "Dateline" rather than observed reality.

Trevor takes his pinched, mini-adult face and his precocious sensibility to a school ringed by metal detectors and security guards. The junior thugs who terrorize him and his asthmatic best friend are immaculately coiffed kids in leather jackets and bandannas who look like escapees from the "Beat It" video. When Trevor runs away from home after the fight with his mom, he hasn't been in the bus station two minutes when some guy with three-day stubble and a Members Only jacket offers him a chance to make some money.

But we can make a difference, Eugene tells his class, even in this sphere of sin and darkness. "Take the things you don't like about this world and flip them upside down on their ass," he urges his charges. Their extra-credit assignment for the semester is to "think of an idea to change our world and put it into action." On his bike ride home, Trevor casts a studious glance at the migrant workers waiting for jobs, at the homeless encampment outside the airport fence. In other words: I see poor people.

Even as Trevor cooks up an idea to change the world, and plots to bring Eugene and Arlene together, the film skips sideways to Los Angeles, where a total stranger has given stranded journalist Chris Chandler (Jay Mohr) a Jaguar. In a series of tiresome vignettes, Chandler eventually figures out that he has been implicated in a moral pyramid scheme called "pay it forward" (as opposed to "pay it back"), in which someone who receives an unexpected favor must then do favors for three other people.

By then we understand that this is the result of Trevor's social studies project, which he thinks has failed but has begun to spread like a virus without his knowledge. Whether this is a good idea isn't really relevant; the point is that our baby saint has wrought a miracle.

Trevor not only looks like a little adult but talks and acts like one too, and I find that more downright disturbing than cute as a doggone button. In some ways, "Pay It Forward" is a story about spineless grown-ups who refuse to act the part and are dominated by a strong-willed kid with an uncontrollable ego and major Oedipal issues. As Arlene rushes through the house in her underwear, getting ready for her first date with Eugene, Trevor presses up against her, applying deodorant to her armpits. Call me old-fashioned, but that seems a teensy bit intimate for an 11-year-old boy and his babealicious mom.

Trevor fakes notes between the two adults, sets the table for a romantic dinner, extorts confessions from Eugene in thoroughly inappropriate teacher-student conversations and generally tries to manipulate everyone around him. When Trevor hems and haws in front of Chandler's video camera, he's still working the angles, pretending to be an inarticulate school kid rather than a mastermind: "Some people are too scared or something. I think the world could be different." No wonder Arlene keeps a bottle of vodka in the chandelier. You would too with this demonic, passive-aggressive, New Age munchkin trying to run your life.

Presumably, lots of people will enjoy "Pay It Forward." It has talented actors. (Well, with the exception of Jon Bon Jovi as Trevor's deadbeat dad, who comes off like a high school jock playing Stanley Kowalski.) It's supposed to be about love and children and trying to do good in the world, and we all have a Pavlovian response to those things. It's got a surprise ending that critics aren't supposed to reveal. (And boy, is it a howler.) But its mawkish sentimentality and its murky religious allegory would be more affecting if they were even halfway sincere. Instead, "Pay It Forward" has a facade of moral seriousness, just like Trevor himself. Neither one wants to save the world, just to jerk your chain.