Thanks to a bloated playoff format and declining TV viewership, this year's World Series doesn't have quite the resonance of those from the "Golden Age." 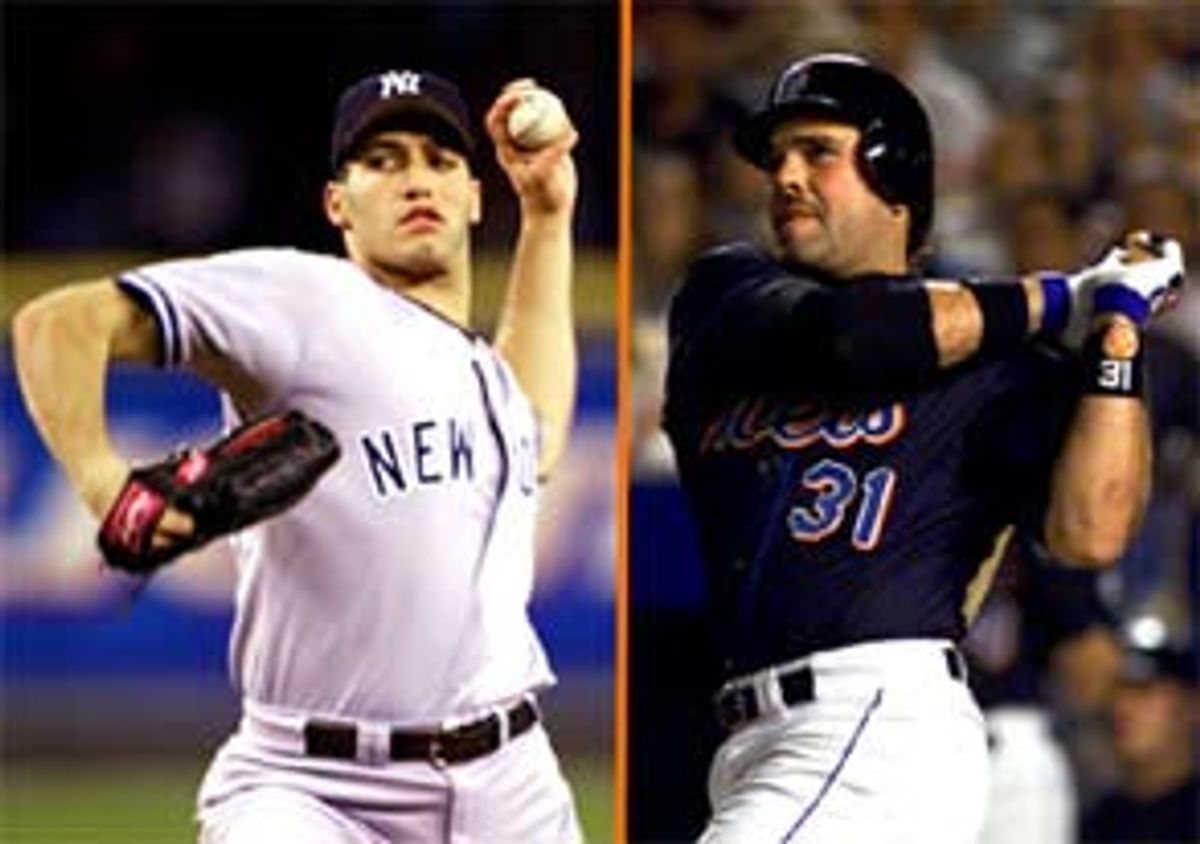 Subway schmubway -- most fans going to this year's World Series will be going there by car. This isn't 1953, and Mickey and Willie won't be out there. But a lot of people raised on them will be in the press box. Which is the primary reason why a percentage of the population in the New York area is acting for the first October in 44 years the way everyone in Alabama acts every November when Alabama plays Auburn.

The Mets and Yankees have always benefited from the fiction that they had blood connections with the New York teams from baseball's "Golden Age" (You remember the Golden Age, don't you? Few black or Latino players, teams relocating, every franchise in the Northeast quarter of the U.S., average attendance per game about half of what it is now?) The Mets' old-English "NY" logo is supposed to remind fans of the old Giants, while the Yankees' logo is supposed to remind fans of, well, the Old Yankees.

In truth, the Mets and Yankees are as connected with the old Giants and Dodgers and Yankees as the expansion Cleveland Browns are with the original Cleveland Browns of Paul Brown and Jim Brown. The mystic chords of memory New York fans had with the Dodgers and Giants were severed when they moved to the West Coast. The Yankees lost the same, as well as half a century's hard-fought dignity, when George Steinbrenner took over the team.

Any other myths we can strip away here? Let's see, how about the notion that a divided New York is ready to go to war over this series? Fuggedaboutit. There are more New Yorkers who are fans of both teams or who don't care at all than who are fans of either. It doesn't look that way when they do a TV feature, of course, because TV people always look for a bar loaded with fans, and in a metropolitan area of more than 25 million you're always going to find some bars where idiots will happily pay $3,000 for a ticket that's not the Alabama-Auburn game. Some people have no sense of value.

Does the rest of the country care about this, some, a little at all? My guess is that this will end up being one of the lowest rated Series ever, and not just because of its local appeal. Professional football has been going through an overall ratings slump in the last five years, particularly on Monday night, yet the Super Bowl ratings last January didn't reflect the overall decline in interest in football. Major League Baseball has been witnessing the opposite phenomenon: expansion, an enormous upsurge in attendance and more people watching on TV than ever -- but watching locally. The World Series is less and less perceived as a national event. That it's being held this year in the national media center may ironically only serve to heighten that fact.

But there is, I think, another reason. A lot of Super Bowls over the years may have been boring, but people continued to watch, mostly, I think, because there was a clear idea that they were seeing the two best teams in the sport. (If not two, at least, then one. There was no doubt that the team that blew out its opponent in the Super Bowl was the best team in football.) Increasingly in baseball there is a perception that after a grueling 162-game regular season -- twice as long as the NBA's and 10 times as long as the NFL's -- the baseball playoff system doesn't work to deliver the best two teams. In fact, in a subtle but poisonous way, it may be working against it.

Take the Yankees and Mets, for instance. That's certainly what one of the three teams better than the Mets and one of the four teams with better records than the Yankees should have done. I don't know that it matters all that much in the playoffs-corrupted NBA or NHL, where most fans have grown up with the idea that the regular season scarcely matters -- when, in fact, the regular season seems to happen in a different season -- but in baseball anything that detracts from the importance of what happened over 162 games undermines the game itself.

The Yankees, for instance, went unchallenged in their own division, built up a huge lead and then tanked it in September with a lack of pride and spirit that still leaves a bad taste in some fans' mouths. (Or at least the ones who paid good money to see those games.) They beat what appeared to be a better team, the Oakland A's, only because the A's were in a tight divisional race and couldn't set their pitching rotation in time to include more than one start for their ace, Tim Hudson.

The Mets' failure to win a single important series with their division leaders, the Braves, is rewarded by a shot at the pennant against a Cardinals team that had lost Mark McGwire, starting catcher Mike Matheny and starting pitcher Garrett Stephenson to injuries, and then had star center fielder Jim Edmonds sustain a back injury in the playoffs.

Yes, yes, I know: The Yankees and Mets both showed a bit of heart by hanging in and winning the tough games, but there is a sense in baseball that the teams who make it to the World Series should be the teams that have proven themselves the best, not the luckiest, and the playoff system doesn't do this.

And so, six years after instituting the concept of eight teams -- two of which didn't finish as the champion of anything -- being awarded the chance to go to the World Series, we're given a situation that couldn't have existed 10 or even six years ago: the fifth and fourth best teams of, respectively, the American and National leagues, representing their league as the best in the World Series. And all for the sake of a national TV audience that, judging from the 30 percent decline in national TV ratings, is largely losing interest.

Virtually every statistical matchup either figures even or gives a slight edge to the Yankees. That doesn't mean the Yanks will win, it simply means there is no reason to assume they won't.

Much depends, of course, on the starters. Leiter and Hampton have been terrific in the playoffs. But Andy Pettitte and Orlando Hernandez are a combined 17-2 in postseason ball. The wild card here is Roger Clemens, who is only 4-5 in the postseason in his career, but in fact has pitched much better than that might indicate: His postseason ERA is 4.10. Last week, on five days rest, he was awesome in pitching a one-hit, 15-strikeout game against a Seattle team that hits at least as well as the Mets. Simply put, at his best Clemens is better than any Mets starter at his best.

The Mets are said to have superior bullpen depth, which may be true but will really matter only if Yank Jeff Nelson isn't back to his first-half form. Nelson, if sharp, can simply take away several of the Mets' best right-handed hitters. The Mets' spot relievers -- lefties Dennis Cook and John Franco and righties Turk Wendell and Pat Mahomes -- give them great flexibility, but they'll be less effective against most Yankees hitters, who don't care if the pitch comes from left or right.

And if the games are close -- and who thinks they won't be? -- who do you like in the ninth inning, Armando Benitez or Mariano Rivera? Consider these numbers: Benitez has a respectable postseason ERA of 3.62 with three saves in five opportunities. He has struck out 34 batters and walked 17. Rivera is 0.33 with 17 saves in 18 tries, and 41 strikeouts to nine walks. He is probably the best clutch reliever in baseball history. Now who do you like?