My contribution to granny lit

What big brown cigarettes you have! 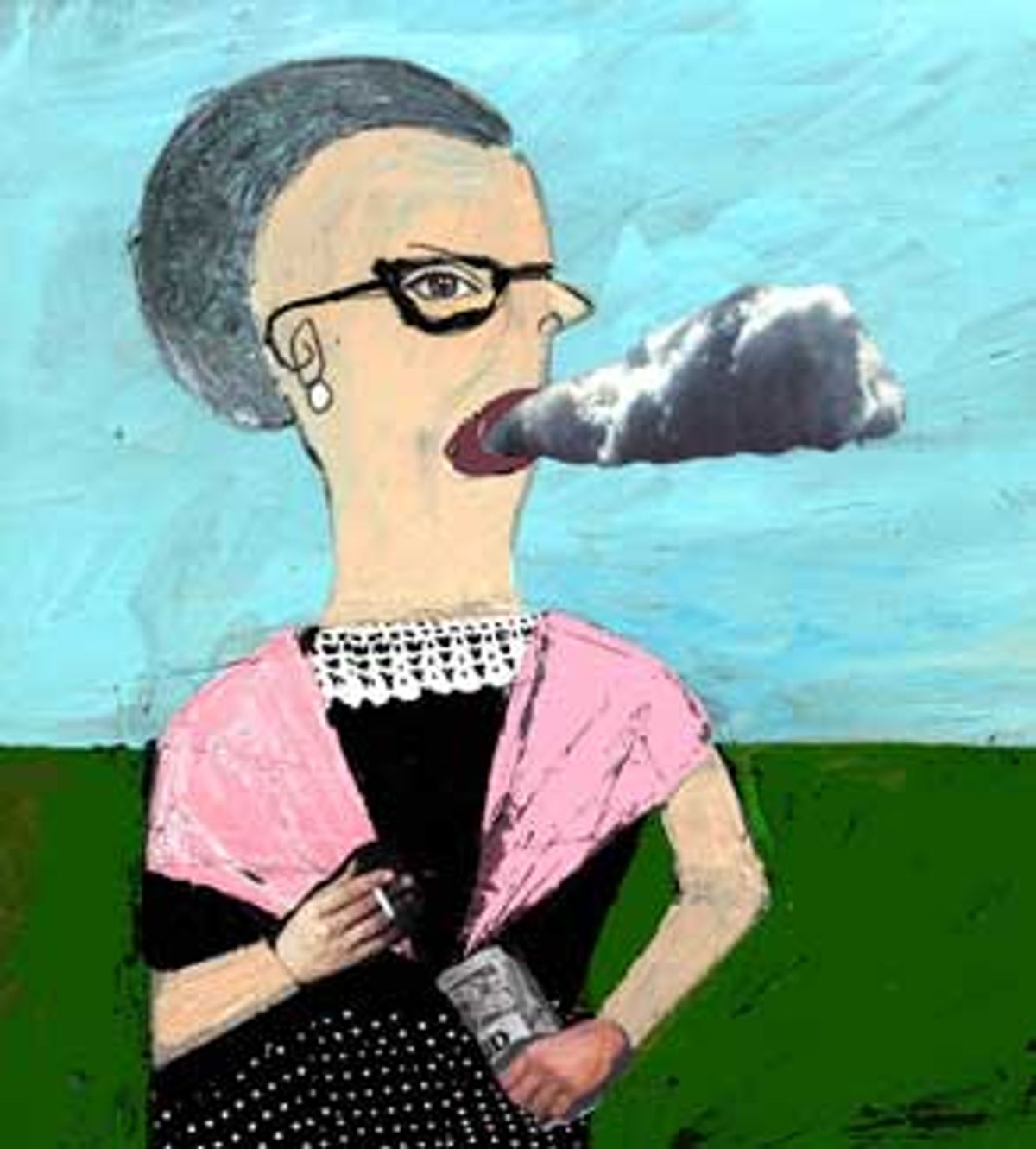 It's all about grandma these days. The literati can't get enough of granny. In poems, essays and short stories, they're eating her up. She's sweet, she's quirky; she's an aproned nebula of nurturance, a big-bottomed, orthopedic-shod purveyor of wisdom. Her kitchen is awash in afternoon sunlight; a fresh-baked blackberry cobbler cools on her gold-flecked linoleum countertop. She is everything the grandchild's parents can't be: She provides comfort and guidance while enforcing a minimum of discipline; she is an abundant bosom to which the child can turn to escape the tyranny of the frustrated ascetics who are his parents.

Grandma, the mother of the mother, is rendered as the wellspring of all life -- but then she always dies. Her demise is the memoirist's first encounter with the reality of death, a moment offered in stark and deeply troubling contrast to the pleasures of living that her presence has always meant.

We are all familiar with these portraits of grandma. Or we probably are, and if we are not, we should be, because we, in our efforts to stay in step with the times, must each write such a portrait, if we haven't already. (Just as we must, if we entertain thoughts of writing, write a story about a writer in a graduate writing program at a Midwestern university who has a confusing modern relationship and a worshipful regard for black coffee and a king's ransom in compact discs and a sack of pop-culture allusions and writer's block. Just the one, mind you, to get it out of one's system.)

I have yet to write my writer story -- it is possible that I never will -- but I'll be hanged if I miss the grandma boat.

My mother's mother, Emma "Becky" Boyer, is 83 years old. She is a walking skeleton with a rattling cough, afflicted by various maladies of the skin, and in her youth was not beautiful. For as long as I can remember, this person has dropped into my life once every year or two for a weekend or, very rarely, a week. My mother, during one of these visits, asked Grandma if she might bake some cookies with me, as a grandmotherly bonding exercise. Grandma squarely refused, insisting that she "couldn't be bothered with baking."

Grandma does not eat any food of her own accord, believing booze and cigarettes to be an excellent diet. She lives in a condominium in Florida, where her life is strictly regimented: At 3 o'clock in the morning she wakes up in her recliner, cracks a can of Coors and heads to the porch, where she spends the day drinking beer, smoking her More 120s and doing crossword puzzles. When evening comes, she retires to the recliner, where she watches television until she falls asleep at 5 o'clock.

This is my grandma story:

A few years ago, Grandma's sister, Aunt Mary, a dear sweet lady by all accounts, came to live with her. Aunt Mary was 81 at the time, very nearly blind and almost totally deaf. A life of chain-smoking had given her a touch of emphysema and ravaged her larynx, so her voice was but a raspy whisper. Nevertheless, she was, as relatives liked to say, earnestly nodding their heads, "sharp as a tack."

Now, I can't recall what circumstances landed Aunt Mary in Grandma's condo, but they were certainly dire; for Aunt Mary couldn't stand going to bed at 5 o'clock in the evening and Grandma had a hard time putting up with Aunt Mary's habit of cooking, and then eating, food.

One day, Aunt Mary needed to go to the grocery store, and Grandma begrudgingly agreed to drive her there in her little beige Citation. When they returned to the condominium complex, they found that all the parking spaces on their side of the building were taken. Since Aunt Mary could not make the walk all the way from the other side of the complex, Grandma was to drop her off by the elevator, drive around the building, find a place to park and bring the groceries up herself. No problem.

She let Aunt Mary out of the car and drove around to the other side of the building. She parked the car, rolled up the windows, locked the doors, got out, went around and opened the hatchback. As she was gathering up the groceries in her arms, she was startled by the screams and frantic gestures of a crowd of horror-stricken passersby. They were shouting things like "Oh, sweet Jesus!" "Look at her! Just look at her!" and "Somebody call an ambulance!" Thoroughly perplexed, Grandma peered around to the passenger side of the car, where she discovered the source of all the commotion.

What had happened was this: Aunt Mary had slung her purse over her shoulder before stepping from the car. The purse got caught in the door when she closed it. Grandma, quite oblivious to the situation, sped off, dragging poor Aunt Mary underneath the car by the strap of her purse across the hot asphalt.

How do you like that? The woman couldn't even scream "Stop the car!" on account of her weak voice; and if she had, Grandma would have been too drunk to notice. So Aunt Mary was skinned, and she died a few weeks later.

That is my grandma story -- the only one I'll ever write -- with apologies to the faint of heart. Perhaps it will find its way into "Best American Grandmother Essays 2000," or maybe you'll hear me read it on Fresh Air. In any case, I am glad to have made my humble contribution to the theme.