At his rally in Oakland, the audience is 99 percent white and mostly shod in Birkenstocks. Talk about an image problem. 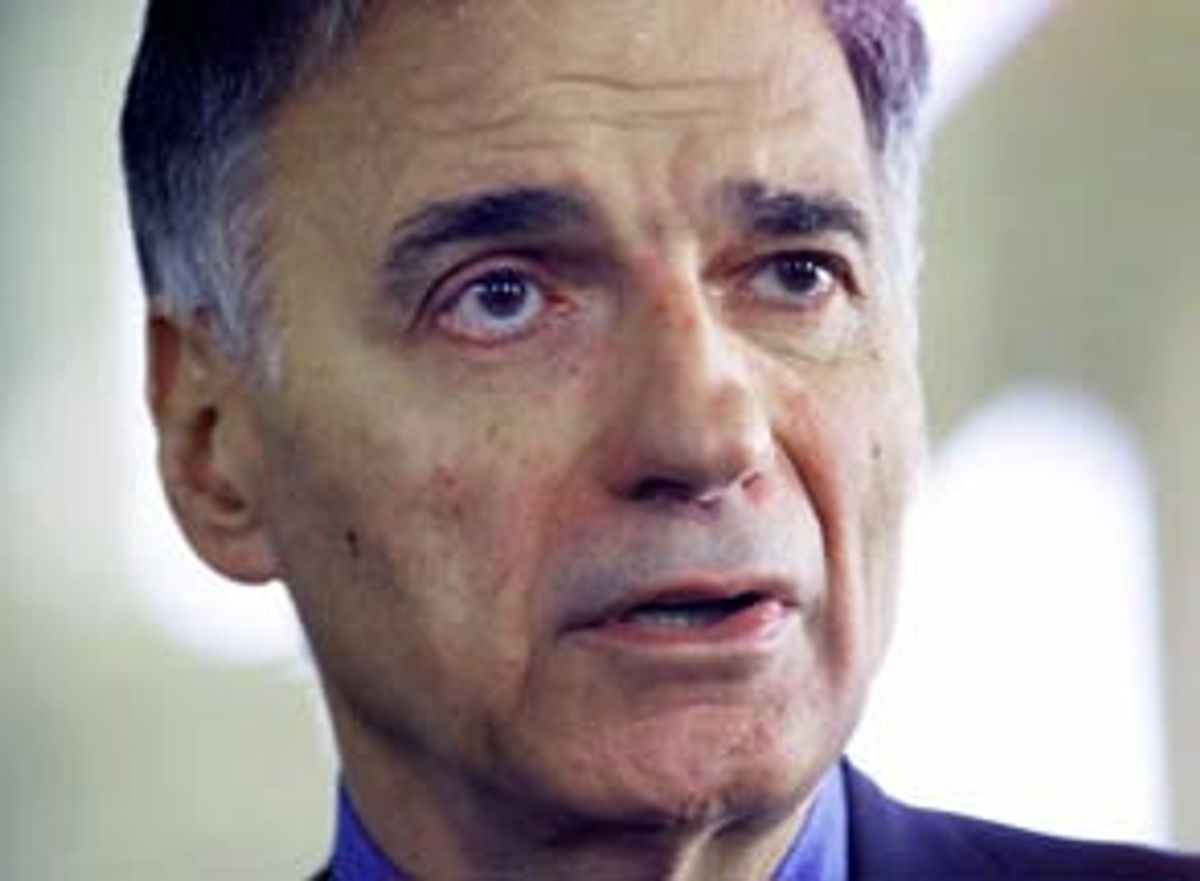 He has even done the math for you. Al Gore has enough of a lead in this state that you can wait until the last minute to decide. "If he's up over 9 percent in the polls, then a vote for Nader is a vote for the Green Party," Nader said.

Your vote won't win you a Green Party president, but it may put a federally funded third party on the ballot in 2004. "So much power has been taken away from us as people and given to cash register politics," Nader said at a poorly attended pre-rally press conference Saturday. "Entry into the race means to try to get as many votes from whatever candidates to build a major progressive movement that will put people in charge of their own future." Given Nader's description of the two existing candidates as a two-headed slave to corporate interests, he may be on to something.

So why does the effort seem a little tired?

Part of it may be due to the lack of media and not the message. There just isn't a lot of press around Nader, and what there is tends toward the unwashed and inflammatory (excepting, of course, the shiny-haired ABC News reporter who walked around asking probing questions like "If Nader weren't running, who would you vote for, Gore or Bush?").

Nader has been filling stadiums in cities across the country, and this latest "Super Rally," held at a sold-out Henry J. Kaiser Auditorium, was no exception. But compared with reports of the festive atmosphere and big celebrity guns who came out in Nader's support in Minneapolis, New York and Portland, Ore., the more homespun California rally suggests that the effort may be winding down. Minneapolis got Michael Moore and Phil Donahue. New York got Susan Sarandon and Eddie Vedder. Oakland got Jello Biafra, Patti Smith and "her partner, Oliver!" Maybe Nader figured he was preaching to the converted here. Or maybe he was just getting annoyed. He fielded a lot of questions about whether his permanence in the race could cost the lesser of two evils the election, and he spent a lot of time assuring cynics that this is a national campaign, not one conducted only in areas where he has no danger of hurting Gore's chances.

Can't a guy run for president without having to defend his candidacy at his own rallies? Of course he can't. Not as long as the race is this close. Not as long as the Presidential Debates Commission -- a private organization run by former Republican and Democratic Party chairmen -- can demand that a candidate attain 15 percent in the polls to be allowed in the debates. If Nader doesn't reach his 5 percent goal in this election, there won't be another viable third-party candidate until the next eccentric pro-business tycoon with a few billion campaign dollars to spare comes along to tell funny stories about his crazy aunt.

Still, lack of access to the electorate is not Nader's only problem. For a candidate whose platform is rooted in up-to-the-minute populist and environmentalist issues like NAFTA, the World Trade Organization, electoral reform and economic reform, the trappings of his campaign are distressingly familiar. The Nader rally in Oakland smacked of groovier, more malodorous times: people handing out socialist newspapers, kids sporting John Lennon glasses, camera readiness rigorously shunned by all.

Forget about Gore's cosmetic disaster in the first debate; Nader's supporters, at least in Northern California, may be the most off-putting thing about him. Nader is attempting to reach out to the disenfranchised, but the truly disenfranchised stayed home Saturday night. The culturally disenfranchised, however, came out in droves. And in Northern California that means -- yessir -- hippies. In this sea of bad shoes, bad breath and bad hats, speakers used words not heard since the last Oliver Stone picture, words like "brother," "revolution" and "Bobby Kennedy." Cornel West called the candidate "Comrade Nader." That can't be helping.

And for a little corner of Oakland, incidentally, the Kaiser auditorium was startlingly monochrome. The audience was 99 percent white, and much of it was shod in Birkenstocks. Talk about an image problem.

Former Dead Kennedy and liberal activist Jello Biafra was the first to take the stage, waving an ironic bit of memorabilia he had pilfered from the Democratic Convention: a "Tipper Rocks!" poster.

"How brazenly cynical a rewriting of history is this?" he shouted. Biafra followed Nader's lead in taking the anti-Gore apologist stance, challenging the view of a vote for Gore as a vote for a more liberal Supreme Court. "Look at [Joe] Lieberman!" he shouted.

Nader's exclusion from the debates, Biafra said, was an effort to keep the "unwashed rabble" from the democratic process. The unwashed rabble went wild. "We can't support a candidate that is for the drug war, Star Wars and the WTO! If the Democrats lose, they have no one to blame but themselves! You expect your politicians to vote with their conscience, why not vote with yours?"

Patti Smith took the stage with her partner, opening with a Kermit quote: "Like a famous frog said, it's not easy being green." After a rather dirgelike musical interlude, she told of how, when she was 21, she had been campaigning for Bobby Kennedy. (Someone cheered.) After he was assassinated, she had asked her father, "What do I do? Who do I vote for? Who do we have?"

Green Party senatorial hopeful Medea Benjamin sounded almost wistful when she said, "We may not have the tear gas or the rubber bullets, but this looks a lot like Seattle!" Then she exhorted the crowd to "get on your knees and thank us for exposing a corrupt system. We are turning our system from one of the love of dollars to one of the love of life! We are building a revolution!"

Cornel West followed in a fit of fire and brimstone: "Let the word go forth from this place here and now that Ralph Nader is on the mooove ... Winona LaDuke is on the mooove, the Green Party is on the mooove. We are part of a global movement and that's precisely why the corporate elite and their governmental cronies are shaking in their boots!"

Not surprisingly, Nader was the high point in what was otherwise a dicey lineup. He took the stand to deafening applause, and explained what had prompted his decision to run. "In the last 15 to 20 years a very discernible trend started occurring in Washington -- the civil society started to be crowded out and somewhat closed down. The citizens groups are being crowded out, they were being marginalized, they were being shoved aside, and that city belongs to citizen groups."

"The purpose of the Green Party," Nader reminded the cheering crowd, "is to produce more leaders, not more followers, to produce a movement of thought that starts at the local level." It's to take action against what he sees as a weakened democracy -- a democracy in which stories of corporate malfeasance and corruption regularly appear in the mainstream media, only to be ignored by the judicial system. All of this in the face of "a burgeoning plutocracy or oligarchy ruled by the rich and powerful, increasingly in the hands of fewer and fewer large multinational corporations, [which] merge and become fewer and larger, astride the world, pitting governments against one other with no allegiance to country or community."

He's not wrong, of course, but can a vote for Nader really deliver us from this?

In Oakland, Nader focused on convincing voters that a Green vote is not a wasted vote -- that a vote for Nader is truly a vote for "people," as Dubya might say, hollowly, "not Washington," that what the Green Party is all about is building a progressive political movement.

In light of the state of the electoral process and the unchecked power of multinationals, it has the ring of an idea whose time has come. Nader's candidacy has reminded us once again of how much corporate interests influence the electoral process, and of how little corporate interests have in common with the interests of the majority of the population, not just of America but of the world. Whether there is a way to address this issue within the current system is doubtful. So why not Nader?

As he himself pointed out, the solutions exist and are waiting to be put into play. But even if elected, could Nader build the coalitions necessary to put them into play? Isn't this the sticking point that compromised the Democrats in the first place? Gore is compromised -- he voted down a proposal to increase spending on the poor but did nothing to reduce corporate welfare, and he voted down proposals to punish corporations that don't follow labor laws, Nader said -- but, as Nader put it well, "Bush is essentially and generally and fundamentally nothing more than a corporation running for president disguised as a human being."

The Sydney Olympics recently reminded us that Americans like to root for a winner. Maybe what the Green Party needs is a "third wave" like the feminist one. Tart up the image, streamline the platform, maybe ask West to drop the "comrade" stuff next time. Because as long as the idea of supporting a progressive, populist party remains an old "radical" idea, Nader and the Green Party will remain where they were in Oakland Saturday night: squarely in the fringe.