Roll out the barrel

Where are the gorgeous, leading-man lugs with beefy chests who were the epitome of unforced cool? 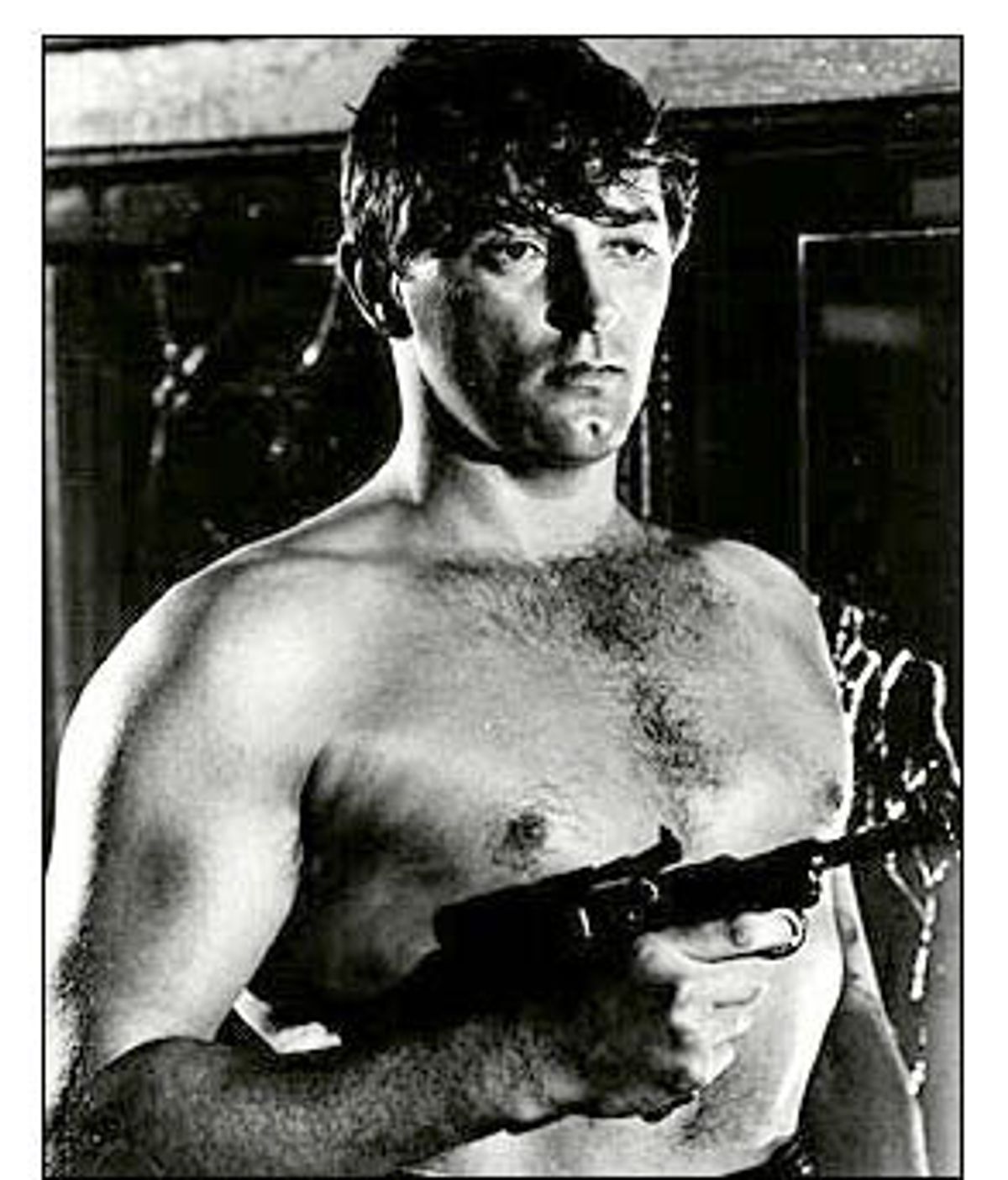 I'm in love with a bigamist.

"The Bigamist," that is, in which film-noir doughboy Edmond O'Brien plays Henry/Harrison Graham, who courts, impregnates and marries Phyllis Martin (Ida Lupino) while still married to Eve Graham (Joan Fontaine).

After seeing the film 10 times, I began to understand my fetish. I long, and even lust, for something that is nearly unattainable these days: the lug with a barrel chest.

Now by "lug" I don't mean a thick-necked dumbbell like Moose Malloy (Mike Mazurki) in Raymond Chandler's "Murder, My Sweet," or the mouth-breathing defensive tackle who can't count to nine, or the thick, sick atrocity exhibitions of Tom Leykus or Tom Arnold. I mean the leading-man, barrel-chested lug as objet d'amour.

The very thought fills me with the intoxicating eroticism of pie crust, beef and a sweaty Burt Lancaster in a white short-sleeved T-shirt. Examples of the lug? Robert Mitchum, William Holden (especially in "Picnic," where more attention was paid to his chest than to Kim Novak's), Dana Andrews, Cornel Wilde, Sterling Hayden, Aldo Ray and thick Brit Oliver Reed, who made all those nuns go batty in "The Devils."

And of course O'Brien, whose Frank Bigelow in the 1950 film "D.O.A." was blasted by his secretary: "You're just like any other man, only a little more so." He was more. More steak, more potatoes and less working out.

Unhealthy? Who cares? O'Brien, like all the other barrel chests, was a lusty, warm, passionate beast. They were men who'd let you sit on their laps and bury your face in their rumpled ties without making you feel like you had some pathetic daddy complex -- even if you did. They had meat on their bones, and you could practically knead it through their shirts. They were bigger, so you seemed smaller. They ate, so you ate. Gwyneth Paltrow? Mitchum would tell her to swallow a few doughnuts. These guys were tough and steely on the inside (though they had their moments -- think of Fred MacMurray in "Double Indemnity" getting misty over Barbara Stanwyck's anklet) and softer on the outside, literally.

These men existed -- I know. My dad was one of them. A cop who drove the squad car "Charly 5" with his similarly barrel-chested partner, my dad looked like a bigger version of James Dean and Captain Kirk (remember his chest?). Eleven years my mother's senior, he was the late 1950s, early 1960s Real Man. An ex-boxer, Woodstock eluded him. He enjoyed busting "hippie freaks," loved Elvis, Sinatra and Hemingway and knew how to dance. Following generation-gap difficulties (fighting over the Beatles and wheat germ, I'm assuming), my mother left him for a college professor and moved our hard-boiled butts to a high-minded liberal community. Major anger and confusion for me ensued and became the nascent fetish waiting to gestate.

While other kids had their skinny, sprout-eating, "free to be you and me" Alan Alda dads picking them up after school, I had a guy in a tousled suit holding a bag of Dick's Drive-In, swirling a toothpick in his mouth. On one occasion a classmate asked if he was my grandfather. I remember being slightly embarrassed, yet secretly proud. I knew my dad could kick their dads' rye-crisp asses any day of the week. But he wouldn't have to. No smart man would dare provoke all that understated charm and menace.

Barrels like my dad oozed confidence. Like kindly elephants aware of their capacity to trample any living creature, they don't need to prove anything. You don't see barrels instigating obnoxious bar fights where mouth-breathing imbeciles go nose to nose with another guy, pointing and yelling asinine barbs like "Faggot!" Prodded by one of these insipid shit boxes, a barrel might arch an eyebrow and utter, nonplused, "Man, I don't know what your bag is." This is a sly warning. If you don't get it, he'll take a swing at you. And you will fall down. Even with a high-class broad like Katharine Hepburn in tow, Spencer Tracy's going to kick the shit out you, and he's gonna be smart about it.

The brainy Hepburn fell for the muggy Tracy because intelligence is key to the barrel's allure. This doesn't mean they quoted Shakespeare or wrote poetry (though some did; nothing's sexier than a self-educated barrel), but they did possess a wit. To a man who asked Mitchum how he maintained his then-envied physique, the actor replied: "I breathe in and out all of the time. And once in a while I grudgingly lift something -- like a chair."

Slouching off any obstacle or victory, these men embodied unforced cool. Again, think of Mitchum and his famous pot bust picture (as seen in Kenneth Anger's "Hollywood Babylon"). What was the attitude on his face? Amused indifference.

What do we have now? We've got that skinny Tommy Lee solemnly simulating penance for parole violation or adorning himself with another stupid tattoo representing how totally badass he isn't. What's happened to our world? Cocktail culture has been embraced. Everyone's nuts about retro. So what happened to the barrel?

Yes Alec Baldwin and John Travolta have aged into the barrel (well, Travolta's just getting kind of portly), but where are all these men now, or rather, where are the young barrel-chested men of today?

They are in the gym, sculpting what could be a perfect barrel into the "six-pack" -- one of the worst things to happen to men's style since bag-off-your-ass pants.

I don't care what your oiled-up, fake-tanned, curiously heterosexual trainer at the gym tells you, if you are not meant to have a six-pack, you will look gross. And so will your veins. Why are the same things that bulge out of old ladies' support hose all of a sudden sexy when they're on a man's body? I understand heroin chic, but varicose chic?

There's no denying that there is an enticing universe of anti-barrels who would never be sexy if fleshy: Bruce Lee, Johnny Depp, Ray Liotta in "GoodFellas" and, of course, rock stars. Granite-hard Iggy Pop is a thrill, Marc Bolan was all elfin animal magnetism and Keith Richards has always been a slinky skeleton. However -- and I know I'm perverse -- Gary Glitter looked pretty damn good marching in those silver platform boots all hairy and paunchy in the early 1970s.

The tough babe of yore did have muscle, even some veins, but you had to squeeze him to find them. Nowadays you just walk right into a man's muscles -- and break your face on them. How comforting. Is this the "nice guy" that feminism wanted? The guy who read those drippy John Gray and Robert Bly books to understand himself while becoming a little too inquisitive about locating muscle mass? Did the combination of feminism's half-assed attempt to get men to treat women with equality and the wild popularity of the 1980s' Soloflex bod morph the average barrel into a perplexed man who doesn't understand women?

I would say yes.

Men are now being raised to be harder on the outside and softer on the inside. Strutting around with that shoulder-to-shoulder walk, men are supposed to be tight-lipped (the ubiquitous threat of sexual harassment) and tight-abbed. How perfectly dull. How perfectly depressing.

No wonder Bud White (Russell Crowe) was such a tremendous turn-on in 1997's "L.A. Confidential." Director Curtis Hanson made him meat up in the 1950s way; Crowe ate a lot of steak and watched Aldo Ray and Sterling Hayden movies. He didn't train with a kickboxer or get a "body by Jake" -- he porked out and studied how Hayden or Ray would walk through a door (doorknobs serve no purpose; you just shove it open). Consequently, he allowed women (and men) the pleasure of watching one of the most insanely sexy performances in cinematic history. You had to gasp when Bud grabbed Lynn Bracken (Kim Basinger) and with no questions, no playing around, just kissed her. He confused many women who think they are supposed to be in love with that dumbshit from the gym or that spindly-legged bicycle messenger/musician/poet. Fuck those guys. Crowe's broad-chested lug had more passion oozing from his uptight white cop shirt than any young, sensitive guy who pretends to understand his boundaries with women.

I understand that men are freaked. Obesity is a problem in this computer age. From the average dude to the Hollywood "leading man," men feel that to be beefcake, they can't eat cake (only protein shakes). But this isn't so, would-be barrels. Eat your cake, have a belly, just do some manly exercises: situps, chin-ups, maybe a run around the track wearing solid gray sweats. (Think "Rocky" -- the first one.) Think how much easier life would be. You'd have more time, more brains (more time to think, see?) and more women. Trust me. Because nothing is more unattractive than trying too hard. That's why Max Cady (Mitchum) scored even when playing a psychotic in "Cape Fear" and why O'Brien's Graham could get two women to marry him and, damn it, still love him at the end of the movie. The barrel-chested men had time for working and loving -- and not the stupid gym.

As for seriously working out -- or thinking too seriously about women -- refer to Mitchum in "Out of the Past," responding to beautiful double-crosser Jane Greer as she pleads excuses for her past, corrupt relationship: "I didn't know anything except how much I hated him. But I didn't take anything ... Don't you believe me?"

The greatest barrel of them all sexily murmurs: "Baby, I don't care."

Kim Morgan is film critic for The Oregonian.