MTV's newest reality show, "Fear," terrifies with the most frightening thing on earth -- nothing at all. 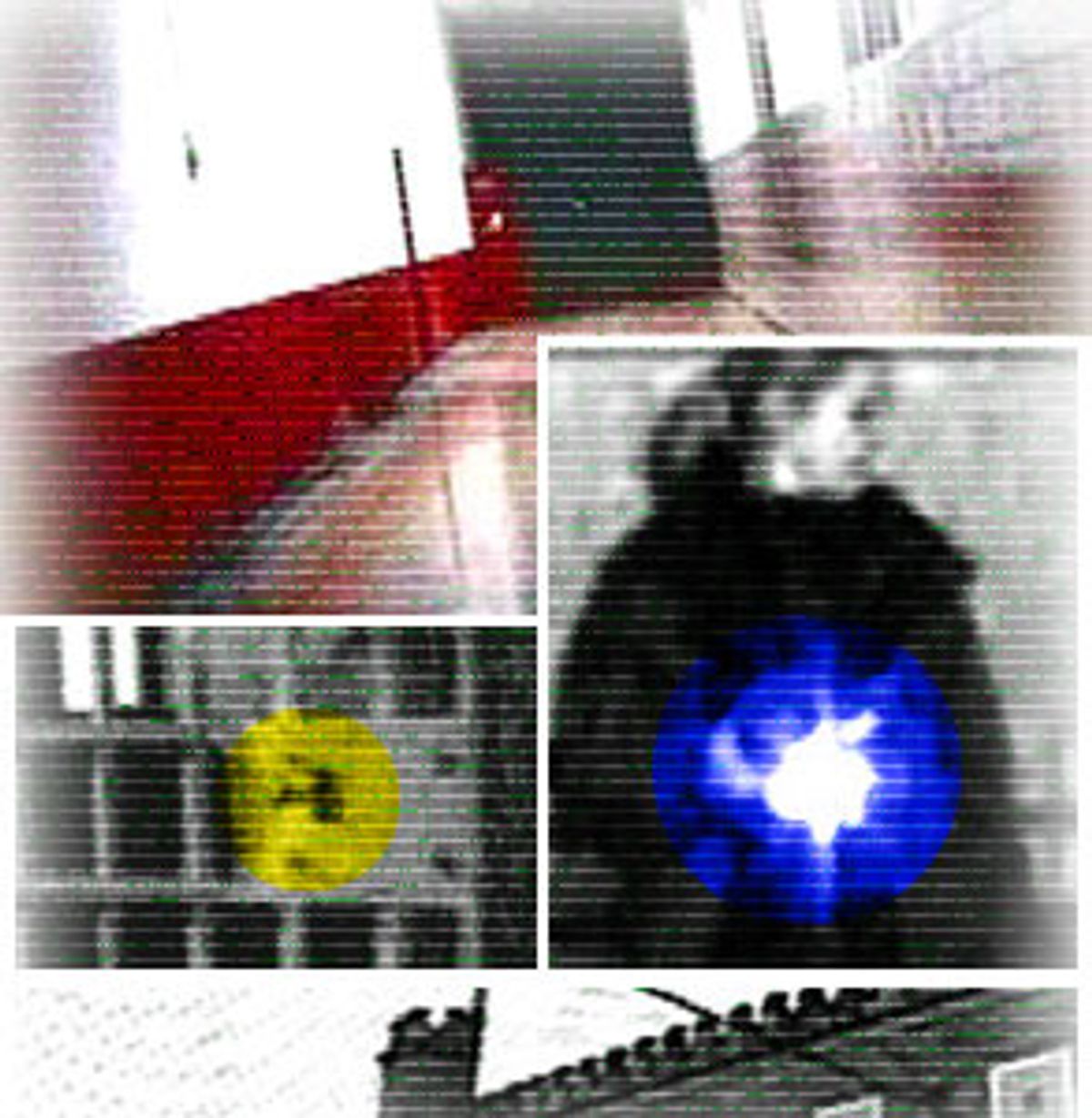 Every kid will tell you that the scariest thing in the world isn't a monster or an alien or a killer -- it's the possibility that one is just out of sight, lurking under the bed or behind the angled slats of the closet doors. That thought can keep a kid up all night, eyes blistering, muscles tense, waiting for nothing to happen. For whatever reason -- maturity, self-delusion -- we lose some of that imagination when we grow up, even if we still shudder when we hear the leaves crackle behind us or twitch when the floorboards creak.

MTV's new reality show, "Fear," plays off that sense of the unknown for both the people on the show and its viewers. "Fear" is what "The Blair Witch Project" would have been if it hadn't been so diluted by hype. Or "The Real World" without the exhausting relationship squabbles. Or "Survivor" set in hell.

Over on Fox Family Channel, "Scariest Places on Earth," hosted by Linda Blair, has an eerily similar feel to "Fear." On tonight's conclusion of the short series, an Illinois family spends the night in a haunted castle. During the debut episode Monday, four students and a university staff member explored an allegedly haunted room on a college campus, camera crew in tow. A demonic-looking face was clearly visible in the wood grain of a dorm room door; on the other side of the door, the room where a student committed suicide had been turned into a boiler room. Inside the room, barraged by a constant flow of loud noises, the group freaked out all at once and fled the scene.

Now, imagine being in that scary, haunted boiler room all by yourself, in the middle of the night, overtired, with only a dim light and crackling radio to guide you. That's "Fear."

The premise of "Fear," with its second hourlong episode debuting tonight on MTV, is simple. Six 20-somethings go to a crumbling, allegedly haunted place to search for paranormal activity. There, they have to complete a series of simple missions, or dares, like spending 15 minutes alone in a room or collecting a blood sample from a murder-stained floor. Complete all their tasks, and they get $5,000 each. Decide to quit, and they lose their money and another person must complete their dare. A computer in their central "safe house" guides them through their missions, selecting pairs or individuals to venture out and assigning remaining team members to serve as home-base navigators.

"Scariest Places on Earth" is scary enough, but its fear factor is diluted by constant narration and this disclaimer: "Some of the scenes depicted in this program were re-creations or dramatizations of actual or alleged events." So did the woman searching for the sasquatch-esque Jersey Devil on Tuesday's episode really hear a roar and run away, or was that a dramatization? "Fear" doesn't need dramatizations, because "Fear" is about the scariest thing on earth: nothing.

That's what makes "Fear" such a breakthrough show: It doesn't rely on traditional gimmicks for an all-too-temporary scare. Instead, it goes for the psychological thrill of the unknown and plays that off our empathy for real people -- people just like us. Then, with the hallmark of reality television, the show asks us to imagine ourselves in place of the cast. How would we feel trapped in a dark hallway? Could we peer under the tarp in a death chamber? As the scares keep coming, the MTV group is terrorized for an entire weekend -- and we are, too.

In the first episode, filmed at the abandoned West Virginia State Penitentiary, one of the players must visit the electrocution room. Lauren is the first person assigned to visit the room, which someone in an edited-in clip tells us still smells like burned flesh. She's supposed to pull the tarp off the electric chair and stay in the room for 15 minutes, but she can't bring herself to complete the task.

Meanwhile, in the Sugar Shack, a place where prisoners were beaten and killed by guards, Christina is flipping out, sobbing and begging "please God" because the light on her camera went out and "something's coming down the hallway." The rest of the team members abort their own dares and rescue Christina, who's had enough and wants to leave.

In an appealing twist on reality television, that psychological terror is all we're seeing; we don't know -- or care -- about the cast's significant others, their baggage-filled backgrounds, their education, their sexuality. None of those things matter when you're walking down a pitch-black tunnel, alone, with a fuzzy radio keeping you in contact with someone you just met.

Because of that, the first two casts on "Fear" -- which features a different group each time -- bonded almost instantly; when five people are all you have to connect you to reality, those other people are, as one character says, "platinum," no matter who they are. But of the groups' relationships, we only see what we need to: the scenes where they talk to each other, trying to psych each other into continuing; their reactions to what they just experienced; their raw feelings.

"Fear" also works because of its graceful production, which constantly keeps the focus on the fear. Just as the presence of nothing makes it scary, the apparent lack of a heavy behind-the-scenes hand makes "Fear" the ultimate reality TV show. Of course every detail is perfectly executed; it's just done in a way that is nearly transparent to viewers at home.

For starters, there are no camera crews. The participants are alone, without sound technicians or producers or anyone else nearby to make them feel OK. Infrared surveillance cameras illuminate pitch-black corridors and rooms for us, but all the participants have are hand-held digital cameras with a light. Tiny lipstick cameras jutting from vests they wear capture their face on tape at all times, but remain perfectly still, avoiding that shaky camera nausea for at least some of the shots. That gives three perspectives: unflinching, dispassionate black-and-white, fisheye views of the room and the person in it; steady close-up shots of the person's face; and the shaky hand-held angle of a digital camera being used as a flashlight, frantically searching darkened, rotting rooms. Edited together, they flawlessly push us into the scene in a way no robotic moving cameras or camera crews could.

That editing is key. Although the manipulative editing tends to incense viewers of "The Real World" and other story-line-driven reality TV shows, it makes "Fear" rule. For me, the editing successfully weaves together all components of the experience: the location's background, rapid point-of-view shots of cameras zooming down hallways, the reaction of the cast members. Maybe it doesn't capture the perfect chronological reality of what happens during the cast's weekend stay, but who cares? It allows for a transparency that gets to something raw and true about fear.

The location is crucial, too. The site of the first episode was the now-abandoned West Virginia Penitentiary, where riots, murders and guard misconduct were everyday events. St. Agnes Hospital, where the second episode was shot, has a similarly troubling history. Both are now abandoned and decaying. Paint peels off crumbling walls; cobwebs and bats hover in the corners.

At the beginning and throughout the show, we see interviews with psychics exploring the locations the cast will visit. Further, the first episode featured interviews with former inmates; the second includes people telling grisly stories about hospital patients' deaths. The cast members also watch the interviews and get background information from their navigator once they arrive in a "hot spot." That history is important; without it, the location would be just an empty building. But with the knowledge and details of grisly murders and torture that took place in the very same room where the cast member now sits, alone, it's hard not to get freaked out yourself -- even though you're separated from the action by time, space and a TV screen. Imagine yourself there for a moment, and "Fear" has you.

Even the sound effects -- perfect horror movie music, heavy breathing, loud noises -- work well. It's impossible to tell if some of the noises the cast is hearing are post-production sound effects, producer created or real. But it doesn't matter, because you can see the terror on the cast members' faces. They're definitely hearing something, and so are we.

The hype surrounding "Survivor" trampled the concept of reality TV; now, throw some real people on TV and the media will refer to your crappy show as "reality TV" and send the audiences flocking. At least, that's the idea. What "The Real World" started, following in the footsteps of the 1970s PBS special "An American Family," was not a trend of real people appearing on TV. Instead, it introduced a way of making dramatic television featuring real people in real situations -- even if the context was artificial. If nothing else, "Fear" is exactly that. The producers and directors allow nothing to overshadow or compete with the show's primary mission: scaring the bejesus out of the cast members -- and us.

As with any reality TV show, continuing so strongly will be difficult. Fans become participants, they know what to expect and the ever-important element of surprise dissipates. And if it's like other reality shows, the producers are likely to play with the formula and end up ruining it. "Fear's" second episode starts slower than the first, and the missions are a bit more gimmicky. (One of the cast members is forced to slide himself into a body drawer in the morgue; three cast members have to perform a séance.) But "Fear" hasn't lost its power, not yet. Even those scenes are frightening, and the whole thing builds up to a terrifying, wrenching crescendo. It's just a guy in an attic, alone. Nothing more. But watch it by yourself, with the lights off, at 3 a.m., and then imagine actually being there. And you'll know what fear is.