Nora Ephron's devious little lottery comedy wades in its own amorality -- and that's a good thing. 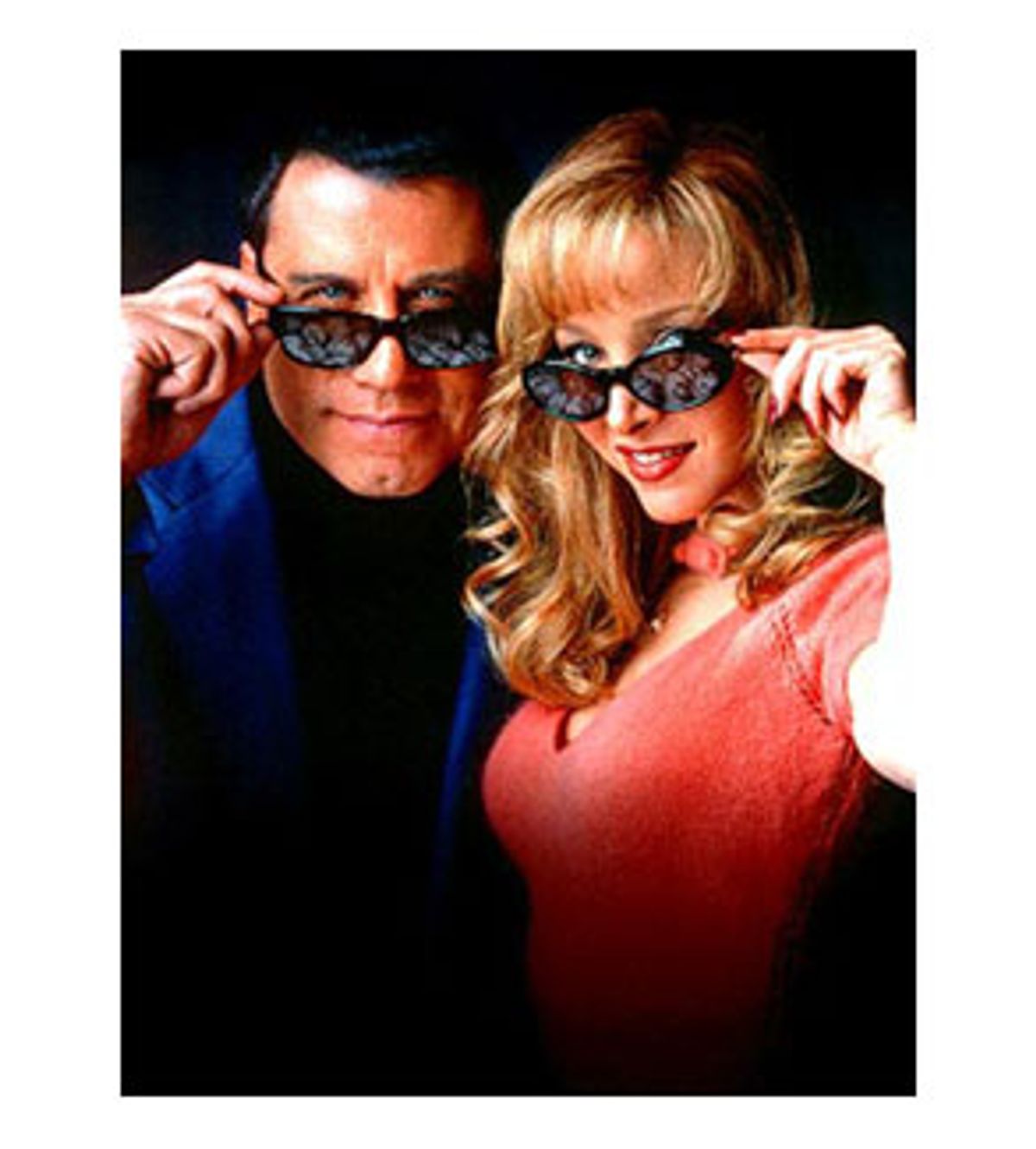 There's something vaguely ill-tempered and misanthropic about Nora Ephron's "Lucky Numbers." Thank God. That something is what makes it so spikily, if fleetingly, entertaining. It starts out as an agreeably candy-colored little comedy and somewhere along the way reveals a row of tiny, bristly teeth.

Black comedies about disagreeable people aren't all that uncommon -- this year's lumbering "Drowning Mona" was a particularly heavy-handed example. "Lucky Numbers" is different, though, and it can't really be called a black comedy: It doesn't bean you repeatedly with self-consciously twisted gags, as black comedies so often do. There's a pleasing lightness to it that actually makes it seem more devious.

John Travolta is Russ Richards, a popular Harrisburg, Pa., TV personality (he's a cartoonishly affable weatherman) who also runs a snowmobile dealership. Unfortunately, he's down on his luck. It has been an unusually green winter, and even though he makes a decent salary at the TV station, he's the kind of guy who runs through money like water.

Facing bankruptcy, he seeks help from his pal Gig (Tim Roth), owner of a local titty bar, who suggests that he fix the lottery drawing that runs nightly on Russ' TV station. Russ is at first appalled by the idea, but he decides he needs to consider it seriously. He timidly approaches the station's "lottery girl," Crystal Latroy (Lisa Kudrow), with whom he also happens to be sleeping. She responds to his dastardly plan not with shock and disgust but with an exclamation: "We're gonna be rich!"

Their plan goes without a catch, until, of course, it falls to pieces. The poor schmo assigned to buy the winning ticket (Michael Moore, who's far more amusing as Crystal's wheezing asthmatic cousin than he is in his usual role of obnoxious documentary filmmaker) meets with mishap.

Then assorted no-goodniks -- Michael Rapaport as a numskull thug, Ed O'Neill as the bumbling but savvy TV station manager -- get wind of the scheme and rustle up trouble. Russ, who really just wants to be a decent guy and drive a late-model Jaguar, tries to scramble out of the mess with at least some tatters of his principles remaining.

As a director, Ephron shows off some sharper-than-usual edges here, and they're becoming to her. "Lucky Numbers" doesn't glimmer with lifeless good feeling the way Ephron's romantic comedies like "Sleepless in Seattle" or "You've Got Mail" do, and it's more life affirming because of it: It's all well and good for two urban professionals to fall in love via e-mail, but a bloodless romance is ultimately much less human than a wicked little movie that has at least some measure of greed, lust, vanity and corruption thrumming through its veins.

The Adam Resnick script rattles along amiably, and the actors seem to enjoy playing around with its pleasingly dislocated jokes. (As Crystal dismounts Russ after some clearly perfunctory porking, she proclaims wearily, "Oh, that is always such a treat.") Shot by John Lindley, the picture has a glossy, lively look. In a pivotal scene, we see one of the fateful lottery balls blurred in the foreground as we're focused on the action in the background. That's typical of the picture's visual construction -- it's artful, but in a stock way.

But it's the actors, relaxed and seemingly having a ball, who keep "Lucky Numbers" rolling. Travolta knows just how far to take his professional nice-guy act without allowing it to be annoying, and he has a way of letting innocent cluelessness cloud his baby blues that's funny in itself. After his lottery win, he foists a fruit basket on his young snowmobile shop assistant, saying with earnest, jovial imperviousness, "As our Jewish friends say, 'Enjoy!'"

Roth plays the lowlife Gig as calm, centered and effortlessly sensible, a fine foil for an array of careless and scatterbrained characters. Bill Pullman is a police lieutenant who's constantly grousing about the paperwork involved in his job, but he doesn't much care for the exciting parts, like chasing after criminals, either. Pullman puts his Middle America-polite, Everyman demeanor to good use as an authority figure who really doesn't give a flying fig.

And Kudrow just about teeters off with the movie in 4-inch gilt stilettos. When we first glimpse her on the air, smiling that pure vinyl smile as she plucks the lucky winning balls out of her popcorn-popper lottery gizmo, her nostrils flare just slightly with repressed hostility. It's not that Crystal hates her job; she hates any job, and the way Kudrow flounces about in her shimmery evening gowns speaks of the special sense of privilege that belongs only to the very beautiful and very spoiled. (She throws one particularly priceless tantrum while dressed in a skimpy Santa's helper outfit, flipping her floppy red cap to and fro like a demented Playmate.)

Kudrow is proving herself to be an incredibly gifted comic actress who's in it for the long haul. She has one trademark style: She always uses that same air-bubble voice, and she delivers her lines as if they've just been flown in specially from some exotic locale in outer space and, well, how can she help it if they show up half a beat late? But from scene to scene, she always keeps you wondering what she's going to do -- her manner is so distinctive that you can't wait to see how she's going to apply it to the next bit of outlandishness.

When Crystal models a $900 leather jacket for Russ, flitting about her girlishly decorated flat, she informs him imperiously that it's from Italy: "I'm not screwing around anymore. If it wasn't on a boat, I don't want it." In the tradition of loopy blonds like Carole Lombard, Kudrow shows a knack for playing women whose brains are only half-scrambled; the other half demands that you keep an eye on them at all times.

Crystal may be the shallowest of the lot in "Lucky Numbers" -- or, at least, the one who'd be able to fill up her closets with frippery the fastest -- but she's by no means the most corrupt. As a lot, all of these guys are pretty bad, and their shamelessness is precisely what makes "Lucky Numbers" such a pleasant little time killer. You might wonder, with no moral compasses to speak of, and no sense of the way fellow human beings should be treated, how do these characters sleep at night? Easy.