How much is a Calista Flockhart impression worth? 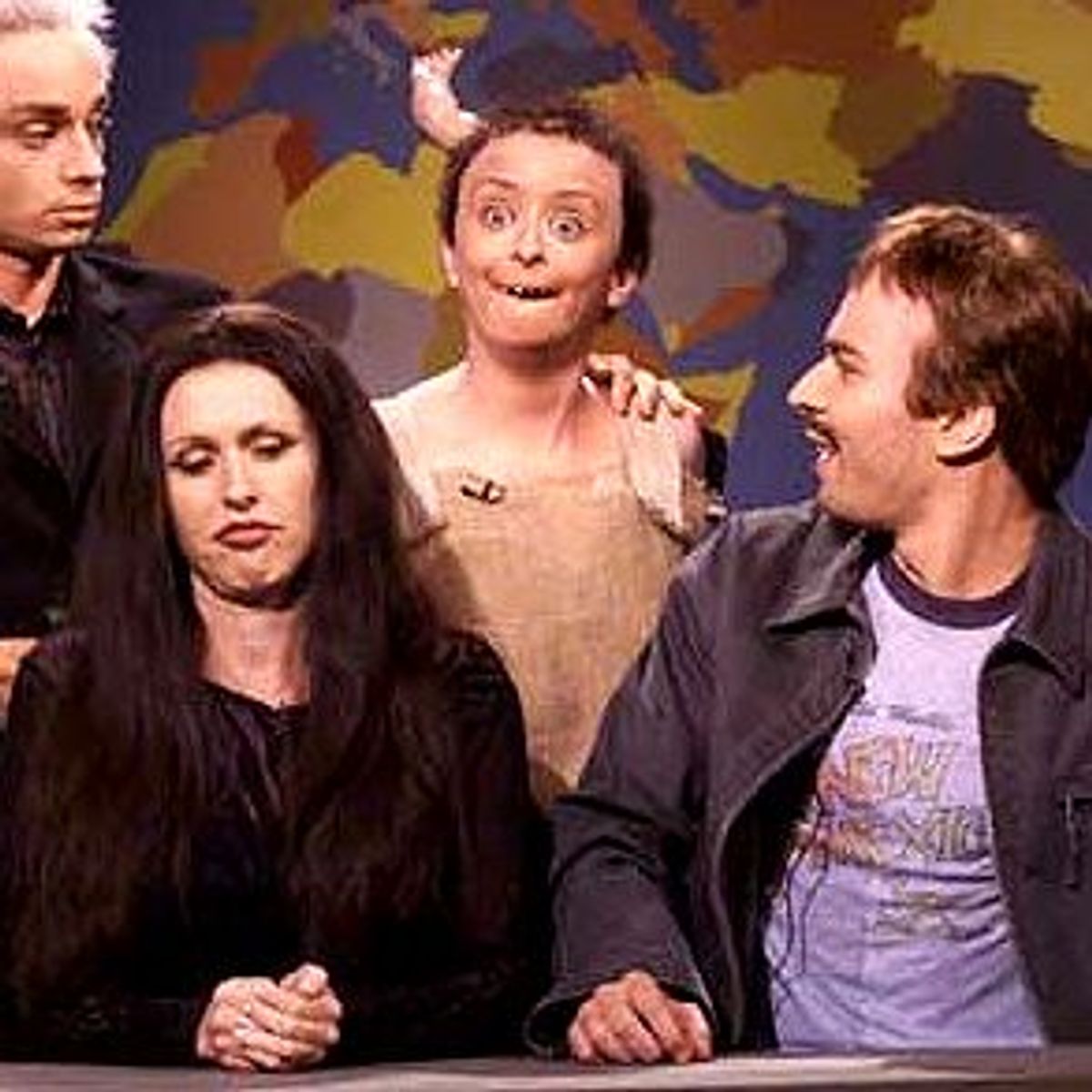 Shortly after moving to Chicago, I saw the phrase "improvisational comedy" transform a lifeless eyeglass salesman into a maniac.

That cello-playing Led-Zeppelin-screaming babe is Rachel Dratch, and after almost four years on the Second City Mainstage she traded her local legend status for a "featured player" spot in NBC's "Saturday Night Live" cast. The move paid off -- a wicked Calista Flockhart impression and roles as a Dickensian street urchin and the love child of Angelina Jolie and her brother, James Haven, have extended Dratch's reputation beyond Chicago's city limits. And a guest spot on Conan O'Brien in June introduced her cello stylings to the rest of the nation as well.

In "Dratch & Fey," a two-woman sketch show she created with "SNL" head writer Tina Fey, Dratch employs the kind of homemade physical comedy that made you spray milk as a kid, like the suburbanite who pulls her nose up with a Scotch tape sling instead of plastic surgery. In contrast, Dratch's portrayal of a puma-mauling victim who urges a visiting Playboy Bunny to photograph her naked in her hospital bed as a centerfold test shoot is a savvy dissection of female objectification. But it's so funny that audiences gobble it up like a heartworm pill in hamburger.

"Dratch & Fey" got a glowing review in the Wall Street Journal. Did that change the economic profile of your audience?

We saw an increase in the number of people with gray hair and suits who didn't seem to be anybody's friends. That might have been them.

Was "Dratch & Fey" a financial success?

No, we paid to do that. We broke even last summer in Chicago when we did it at Second City, but when we decided to do it in New York this summer, we got scared because everyone was like, "Remember, things that are funny in Chicago aren't funny in New York." Like it's on a different space-time continuum. So we hired a publicist and made a deal with the Upright Citizens Brigade Theater, where we got the theater for free and they kept the door. And then it sold out almost every night.

Did you always want to be an actor?

Acting was a little voice I didn't listen to for a long time. I grew up in Lexington, Mass., and most people in my suburb were professionals, so acting wasn't really something you did. My dad is a radiologist and my mom just retired from her job as director of a nonprofit, but I kept gravitating toward comedy. I majored in drama and psychology at Dartmouth, which wasn't a very arty atmosphere, and after I graduated in 1989 I went to Chicago to try comedy. My plan was that the comedy thing would fail, and when it did I'd go back to Boston to be a therapist. But each year I made just enough progress to keep me in Chicago.

How much progress was enough?

You have to audition to take classes at the Second City training center, and it took two auditions for me to even get to take a class there. After about three years, I felt like I should have a normal job, because everyone I knew in college seemed to be on a path to these stable careers as doctors and lawyers and stuff. I had a lot of conflict over that, so I applied to the Masters of Social Work program at Loyola University-Chicago. I was hired by the Second City touring company just in time, though, so I didn't go.

Were you able to support yourself acting once you were hired by Second City?

No, we only got paid about $60 to $80 per show when I was touring, so I still had to temp. Then in 1995, I went straight from the touring company to the Mainstage. I don't remember exactly how much we got paid on Mainstage, but it was enough to live on, which felt cool.

What's the worst job you ever took to support your acting?

I dressed up as Tweety Bird and stood outside the Warner Bros. store at the Woodfield Mall once, and I temped, which entails a variety of degradations. The weirdest job was probably working at a mental health center running groups for long-term schizophrenic patients. It was kind of sad, there weren't that many doctors there. Lots of characters, though.

What made you leave the Second City Mainstage?

When I first got there I remember thinking, "They're going to have to drag me off this stage, I'll never leave." It's hard to explain -- there just came a time when I knew I should move on, I didn't want to get burned out. But I still miss it. I miss improvising every night, and I miss the feeling of being in a real ensemble. Everyone on "SNL" has been nice to me, but it's less of an ensemble feeling just because of the structure of the show.

How much are "SNL" actors paid?

I don't want to say how much I make on "SNL" because I had a bad experience with answering that question once. I was talking to someone who really wanted to know how much I made and I didn't want to say but she kept asking, so I told her. And when I said the number she screwed up her face and said, "Really? God, that's not much more than I make!" And I felt like I'd been had, so I decided that it's best to just not answer that question.

What did she do?

She was a college professor.

I will say that everyone starts off at the same salary at "SNL," and the writers and actors make about the same. It's a lot less than people get for sitcoms, but it's plenty for me to live off of in New York. You sign a contract before you even audition so there's no negotiating whatsoever. My contract is a new format -- seven years instead of five, and now featured player status lasts for two years instead of one. I was so excited when I got the job I didn't really read the contract, so I only realized that I would still be "featured" next year about a month ago.

What's the real difference between featured and full cast members on "SNL"?

There's no big practical difference, except that Lorne [Michaels, the show's producer and forefather] warned me that there would be shows I wouldn't be in. It's just not the same priority to make sure I have something to do, which has made me work hard on my writing. Writers are less likely to write for new people, and you get to cast the pieces you write, so writing is the best way to make sure you'll be in the show. I've co-written the Boston scenes and the street urchin scenes I did with Tina [Fey].

Did you feel more famous as a Second City actor living in Chicago, or as a "SNL" player living in New York?

I'm more anonymous in New York, but I recently had several incidents in the same day where people yelled things like "We love you!" and "You rock!" when I was out walking around with a friend. That was great, but it doesn't happen every day. When I first joined the cast Will Ferrell said, "When I first got this job I thought I wouldn't be able to ride the subway. I totally ride the subway."

Do you have any investments?

I haven't invested any money, I just have some in savings now. I feel like I should be doing something savvy with it, but I'm not very money conscious. It's kind of strange being an actor; you can't always count on there being a job. Especially as a woman if you want to work in Hollywood, there's a lot of bullshit with the age thing. You always hear things about women over 40 having trouble getting roles. There's also an impending strike, which is kind of scary because I was hoping to do movies next summer, and if the union strikes I can't. The strike makes me think I need money in a sock under the mattress.

Are you worried about your ability to earn a living as an actor in the future?

Well, comedians often don't age gracefully. You're only as good as your last sketch, and everyone's so fickle -- it can be a harsh business. Now that I'm on camera, I'm more aware that everyone expects actors to remain timeless and beautiful. If people see someone on camera who has been off-camera for a long time, they always say, "Boy, he has really aged." Well, so did you! But there isn't the same standard for stage actors because stage isn't as tied to looks, so I'm glad I can do both.

Can you still imagine a day when you'd be a therapist?

I don't know if I could do it now, I've put so much time into this career at this point. I think I was using that as insurance for failure -- like it would be ridiculous to say out loud that it's my dream to be on "SNL," so I'll tell everyone that I really plan to be a therapist so when it happens it won't look like I failed.

So you've scrapped your backup plan.

Yeah, I guess I have. If you come from a conventional or traditional background like I do, you have to try what you really want to do or you'll regret it. My brother is a lawyer who switched to comedy writing. He struggled for a while, but now he's writing for "The Chris Rock Show."

It takes a long time in these fields, whether you're an actor or a musician or whatever. A setback doesn't mean you should get out of the business. You have to really like what you're doing, though, or you'll weed yourself out.

Katie Watson is a lawyer and writer in Chicago, where her own sketch show, "Epic Prattle," just completed a wildly successful run.