In his epic new novel, Bruce Sterling leaves technophilia behind and sides with humanity. 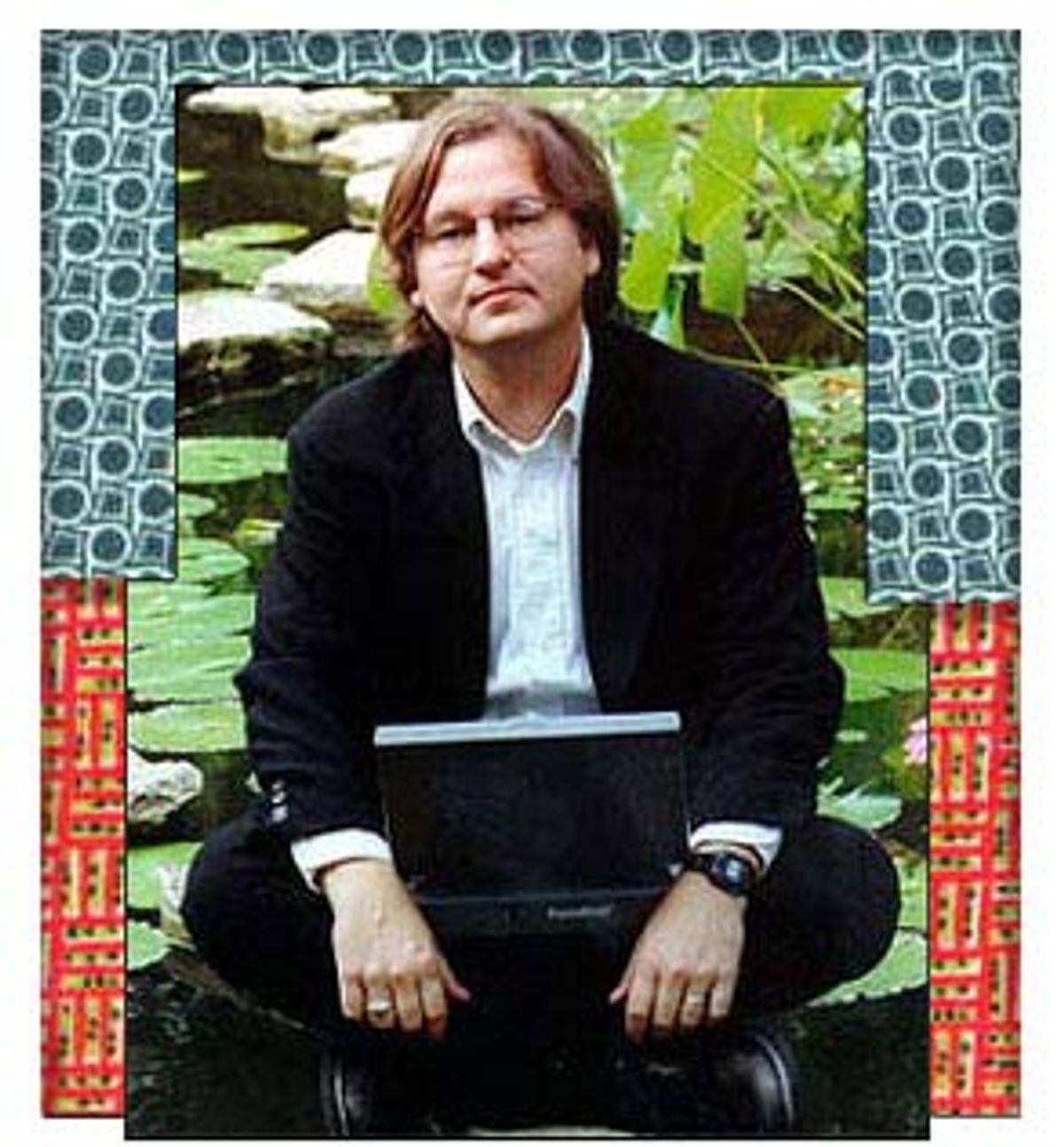 For better or worse, the "cyberpunk" tag will remain stuck to Bruce Sterling -- novelist, science writer and polemicist -- for the rest of his career. He and William Gibson were the main guys behind the curtain in the late '80s, when that formerly marginal genre got huge. They not only changed the common notion of what a plausible sci-fi world was supposed to look like, but also, and more vitally, helped to form the emerging geek vanguard's notions of itself, as well as a loose, technophilic consensus of what modernity means, and what the future should hold.

A good nest of laurels? Not exactly. A lot of silly stuff came out of the whole cyberpunk trend. Beforehand, when you were on the Internet you were merely slouched out in a chair, typing onto a Compuserve message board or something. Afterwards, you were flying bodilessly through cyberspace, a creature of pure data, communing with other cyberbeings through virtual reality. It's taken years to get people to stop talking that way, not to mention believing some of that bunkum. Also, the books mostly haven't held up well. In just over a decade, early renderings of the Internet have come to seem quaint and self-astonished in the same way as Jules Verne's "A Trip to the Moon" must've seemed during the height of the space age. Less so, but in that way, Sterling's 1988 novel "Islands in the Net" flourishes that sexy new com-tech apparatus, the fax machine. All the same, when the day comes, they'll use that "cyber" word way up top in Sterling's obituary -- there's no avoiding it.

He deserves better. If any classification fits Sterling's fiction easily, it's one of his own making: He coined the term "slipstream" to denote books and authors that share some of the speculative, experimental ends of good science fiction, but which use different, often more mainstream, ways of reaching them. Thomas Pynchon would be a slipstream author, as would Kurt Vonnegut and Iain Banks, maybe David Foster Wallace, and definitely Borges and Kafka.

Sterling remains a science-fiction loyalist in principle, but there's long been a hint of ambivalence, a hint perhaps of thwartedness and pique, in the way he champions pure SF in his essays while excoriating the SF scene as it really exists because it produces mostly genre paperbacks, tie-ins, paint-by-numbers imitations and sequels-of-sequels-of-sequels. Conversely, writing on John Updike's "slipstream" novel "Roger's Version" in the fanzine SF Eye, he comes off like a heavy-metal kid apologizing to his friends about liking Beethoven. Like: I know what you're thinking; it's just some boring old geezer. But wait! If you pay attention to it -- like really give it a chance -- the guy really has something going! Sterling has serious authorly instincts and sensibilities, and "Zeitgeist" is proof of his being too large for his current aquarium.

Sterling's new novel, "Zeitgeist," is a lot of things at once. It's a fast, dense, complex fin-de-siècle novel, rendered as a pileup of telling details, that tries to encompass the entire world. It's an epic human tragicomedy like Tom Wolfe might've done if he were a bit younger and could notice something besides korina wood tea carts and duvet covers. "Zeitgeist" is what Douglas Coupland could do if he could stop sniffing his fingers and checking his hair. You could call it Pynchonesque for its playfulness, or compare it to Umberto Eco's "Foucault's Pendulum" because of all the poststructuralist theory sandbagged around its pilings and the grad-school references spilling out into the dialogue. It's a really smart book and a gleefully dumb, breezy book, both at the same time. Big in scope; fairly small in heft. What it ain't, however, is a stock science-fiction offering, or a blind paean to technology.

The year's 1999, we're in Istanbul, and Leggy Starlitz is a fat-assed bunco artist with connections to unpleasant characters all over the world -- Russian gangsters, ex-spooks, Turkish oligarchs, paparazzi, Janet Reno, individuals associated with the music industry. He's been up; he's been down. This time he's up. Starlitz is our man -- the American 20th century personified -- and he's promoting a crassly talentless, violently ordinary lip-synch ensemble called the G-7 Girls, one girl from each member nation, each nameless and instantly replaceable, each replete with cheeseball "native" costume. The G-7 Girls are the idols of preteen girls all throughout the habitable world and France. But they don't sell records. It's all about the merchandising -- the action figures, the inflatable backpacks, the candy necklaces. It's a giant sham, launched via a bet between Starlitz and Makoto, a Japanese global pop sensation of his acquaintance. The only condition: The G-7 Girl concept ends in Y2K -- vanishes, like it's never happened. It must have a shelf-life.

The act travels to Turkish Cyprus. Adventure and hilarity ensue. Gangsters, gangster-capitalists, bankers and capitalist-gangsters mix in recombinant fashion, pretty much like in real-life. NATO is crooked, everything smells rotten and the rot always runs right to the top. Again: life. As Leggy explains, "G-7 is a stone multinational. We got personnel from all over the world. That's the new way to do biz, you know? You gotta stop being picky. You're part of the steamroller, or you're part of the road."

Pausing to bury a corpse acquired along the way, he chats with Viktor, a young Russian rave kid with big pants and an up-and-comer on the Russian mafiya circuit:

"There's death, and there's death," Leggy postulates. "When you bury a century, a whole lot has to go down with it. Spirit of the times, brother."

Their situation called for something nice and loud. Something mawkish. Something mundane, that would restore them to the default position of human banality, circa 1999. Celine Dion singing the theme from Titanic. Perfect."

Sterling is an author and essayist of complex, often unpredictable convictions. His "Manifesto of January 3, 2000" calls for deep environmentalism marketed through chic fashions and an up-amped pop culture industry -- a sincere but weird proposal, especially given his steely attitude toward pop culture in other contexts. He's a big advocate of regional culture, but also a globalist. It all gets complex. But while he doesn't have much that's positive to say about organized political action -- Marxist, Social-Democratic, pistachio, anarcho-whateverist, butter pecan or elsewise -- when it comes down to it, Sterling will always side with people against technology, and with either against entrenched power.

In "Zeitgeist" -- interestingly for a book by a god-influential futurist -- technology nearly always appears on power's side. Tech is an ambivalent thing, wondrous in itself, but dangerous when it's pointed at you -- and often beguiling and soul-tapping for those who come to depend on it. Leggy's ex-wife, Vanna, pulls out a k-rad Motorola Iridium satellite phone.

"Instant global access," Vanna announced, bravely sniffing back her tears. "It's linked up, like, totally out of this world."

"Yeah, that gizmo is totally not of this century. It's got the new stuff!"

Starlitz stared in silent hunger at the satellite telephone. The device stank of futurity. They would probably go broke, being so far ahead of the curve and all, but the gizmo was an utter harbinger of things to come, like discovering a fossil in reverse. Starlitz felt a powerful urge to grip the phone, caress it, perhaps bite it."

The single incident in which the Internet, the crown jewel of the modern techno-juggernaut, appears in the book is when a government spook is projected from it as a slimy black presence, beamed to the site of a covert battlefield via spy satellite. The tech that comes off the best in "Zeitgeist" is antique -- a set of '60s vacuum tubes smuggled to the G-7 soundman, an Aston-Martin DB-5. We might have to have all this new stuff, the book suggests. We have to keep on top of it all, but we don't have to surrender to it. We don't have to get hooked.

The plot of the book basically falls apart after the first 150 pages, when Leggy loses his group to a Turkish gangster-capitalist, collects his 10-year-old daughter and hits the road on the way to nowhere in particular. Things get episodic, with detours here and there, and all the narrative tension of a collapsed lung. It doesn't matter, though. The hits just keep on coming. Leggy explains French literary theorists to his daughter, Zeta:

Which is about as cogent and final a dismissal of the entire meta-meta academic climate of the 1990s as has ever been uttered by any character, fictional or otherwise. The book's hot that way.

Leggy and Zeta make their way back to Cyprus, and Sterling starts patching the plot back together like an eight-armed Hindu deity working a phone switchboard. Denouement ensues, and "Zeitgeist" ends on a note of hope: The 21st century can't possibly be as awful as the 20th. We're learning our lesson: It should be more about people from now on. Whatever happens over the next hundred years -- and whatever "cyberpunk" starts to look like once the last of its pre-millennial edginess has worn smooth -- that idea should hold up well.