"Our Man in Washington" by Roy Hoopes 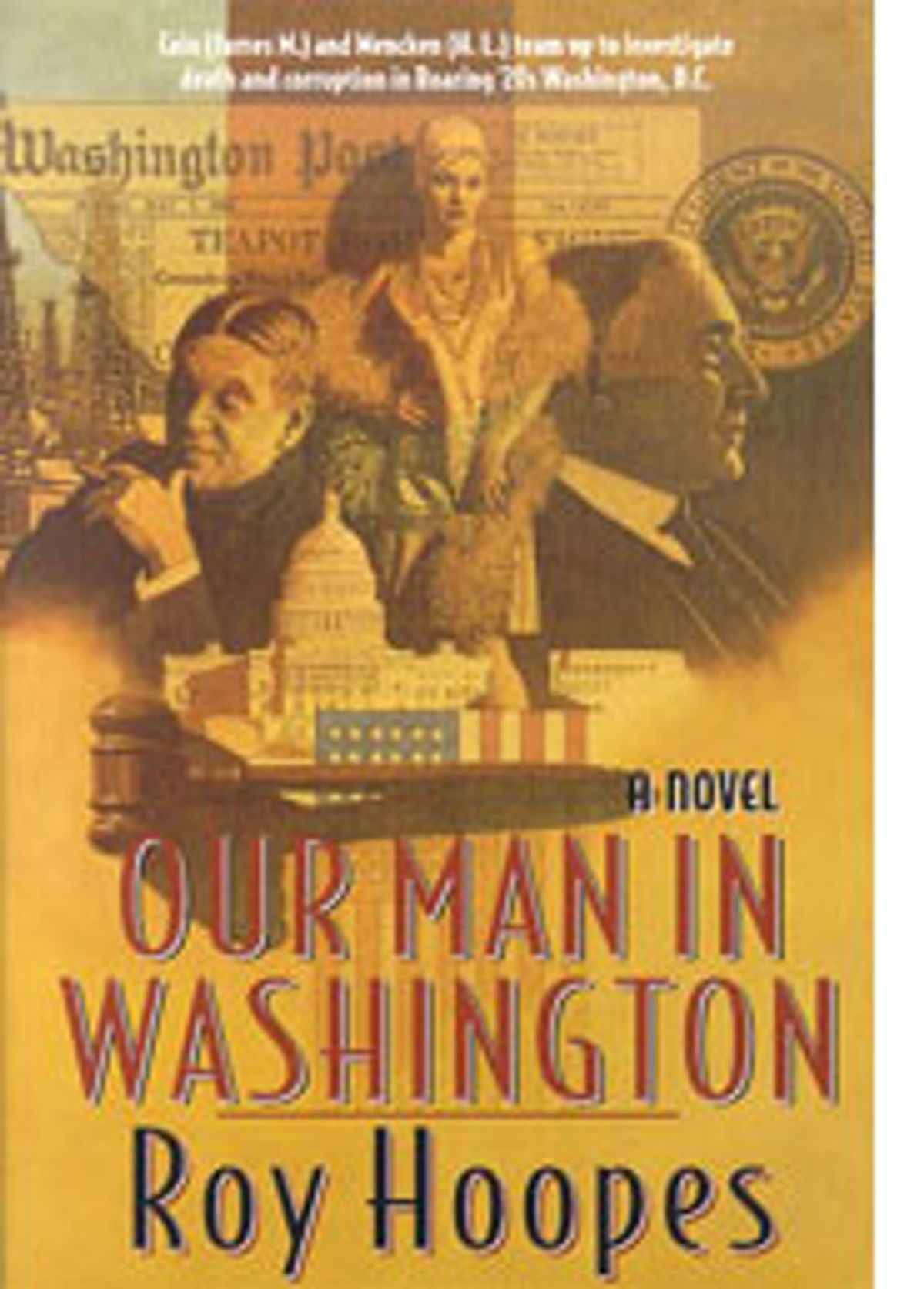 As a regular reader (and collector) of Washington-based political fiction, I couldn't resist the premise of this first novel: H.L. Mencken and a young sidekick journalist, James M. Cain, investigate corruption (sex, bootlegging and murder) in the Harding administration.

Roy Hoopes, a career Washington journalist, certainly has the credentials to tell this story. The head of white hair he sports in his author photo suggests that he has witnessed his share of mischief in the capital, and there's no doubt he knew Cain, his narrator: Hoopes has written an award-winning biography of Cain, a writer best known for novels that became film classics: "The Postman Always Rings Twice" (1934, filmed in 1946 and 1981), "Double Indemnity" (1936, filmed in 1944) and "Mildred Pierce" (1941, filmed in 1945). Cain's short stories, novels and novelettes epitomize the hard-boiled style that flourished in the 1930s and '40s, stories that are fast-paced, sexually driven, violent and melodramatic.

"Our Man in Washington" opens in 1923, just as rumors are spreading of corruption in the Harding administration. In search of material for a book, the young Cain has been asked to work with the celebrated Henry Mencken -- author, columnist for the Baltimore Sun and editor of the Smart Set -- who at 43 is nearing the peak of his influence as a journalist, philologist (a good Menckenian word) of the American language and caustic critic of American life and letters. When the duo board the train in Baltimore for the nation's capital, they embark on an adventure that blends fact with fantasy as they unravel the skulduggery of the Harding presidency as it has never been unraveled before -- that is, entertainingly.

These are the best-read, most literate investigators a reader could hope to encounter -- though Mencken gets all the good lines. If you're not familiar with Mencken, you'll never find a better introduction, for Hoopes draws heavily on his writings. He was outrageous, droll, opinionated, an expert on everything, a philosophizer, a crank and a person who would have been a hell of a lot of fun to hang out with.

The plot kicks into gear when the duo meets Roxy Stinson, the beautiful (she's tall and shapely, with reddish blond hair), intelligent (she reads the Smart Set) and savvy ex-wife of Jesse Smith, the bagman for an unsavory collection of Harding cronies known as the "Ohio Gang." Both Cain and Mencken are seriously smitten with Roxy, who willingly becomes their key source of information about the Ohio Gang. When Jesse is found dead (he preferred men, but Roxy remained his best friend), the whodunit begins in earnest.

In the course of their investigation, Cain and Mencken visit with all the key players in the infamous Teapot Dome and other scandals of the Harding presidency, including a few who remained in the background, like Nan Britton (Harding's mistress, and mother to the president's illegitimate daughter), Florence Harding (the first lady, known to her friends as "the Duchess" and the backbone of the president and protector of his image) and Warren G. Harding, whom Mencken always refers to, unaffectionately, by his middle name, Gamaliel. Hoopes portrays Harding in a manner consistent with history's low regard for him as a president, although Harding had already died by the time the scandals and Senate investigations that ruined his administration erupted.

"Our Man in Washington" also has an uproarious subplot involving the theft of the famous Hope Diamond, the 45.5-carat sapphire blue rock then belonging to some close friends of the president and first lady, Ned and Evalyn McLean (at the time, they also own the Washington Post). When Roxy proves herself a serious student of Voltaire's "Candide" during a thrilling moment at the resolution of the missing-diamond mystery, events become too personal (if not X-rated) for the cosmopolitan gentleman Henry Mencken, but not for Jim Cain, who has fallen in love with Roxy. Both the theft and the murder are nicely interwoven into the corruption investigation by Mencken and his young partner. Today, everything they found could be printed; in 1923 they worried about libel and privacy laws that protected public figures. But, as Mencken told the president, he wouldn't have considered publishing stories of extramarital dalliances, anyway.

Unexpected people appear throughout the story. To mention but a few: When visiting Mr. and Mrs. McLean's estate, Cain and Mencken stroll out to the first tee of the golf course, where Mencken introduces himself to the boy waiting to caddy. The boy is Shirley Povich, who will become Washington's most admired sports columnist (and father of TV talk show host Maury). That's one of the more esoteric cameos, but no one will miss Mary Roberts Rinehart, Valentino or Henry Luce, who has just started a new magazine called Time.

The book's preface states that all of the novel's characters were alive and active in 1923, but "most of what takes place here never happened, except in imagination." Yet, 380 pages later, particularly after the nonfiction appendix detailing what became of each of the story's principal characters, it's hard to shake the feeling that you've had a peek at real history: Is this all merely well-told fiction, or did Cain learn facts from Mencken that in turn were shared with Hoopes?