His "compassionate conservatism" can move a grown man to tears, but how far does it really extend? 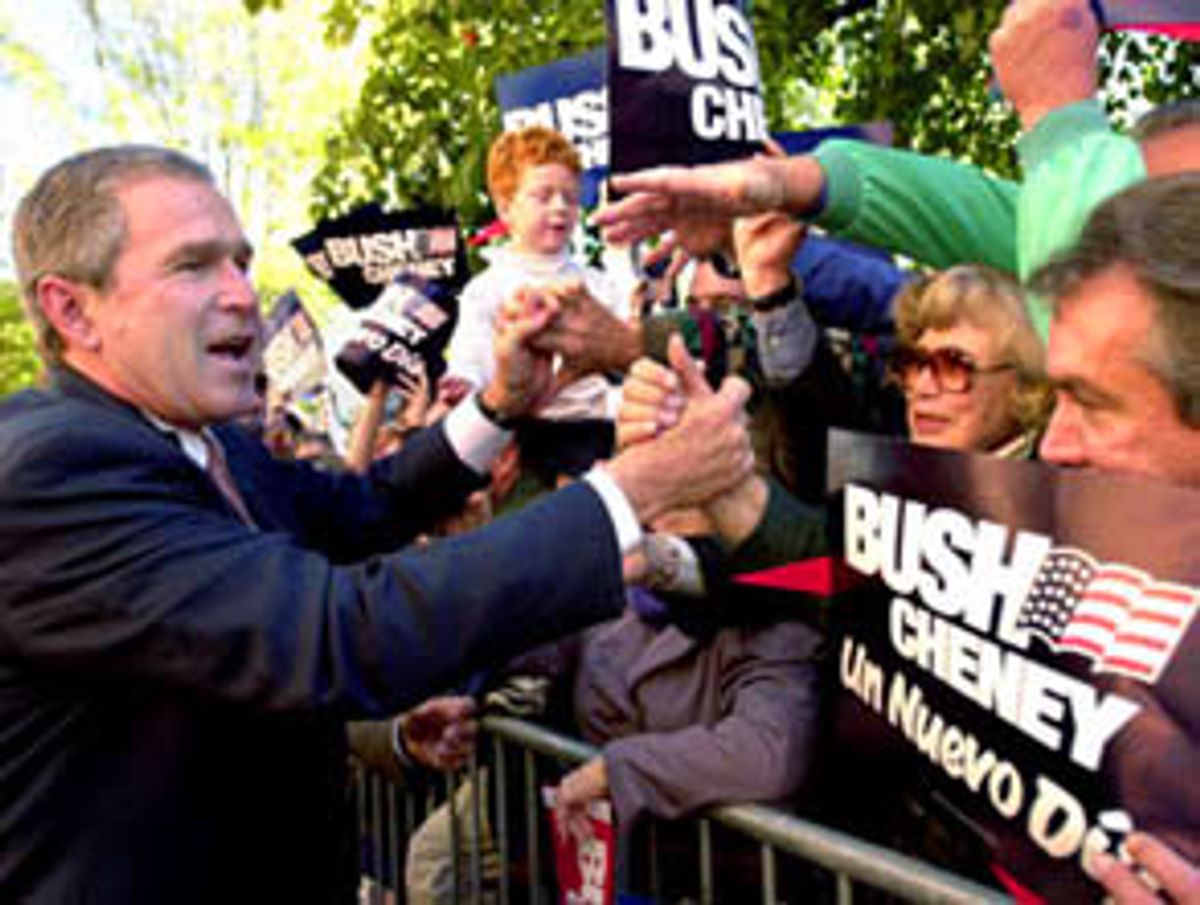 The man is crying.

It's Gov. George W. Bush's last campaign stop in California, and instead of an ocean of rah-rahs and the three-fingered "W" sign his fans make by thrusting out their three middle fingers, Bush has chosen instead to come to a house of God. We're at CityTeam Ministries, a privately funded addiction program and homeless shelter -- which Bush is heralding as an example of the kind of faith-based program he thinks government should be helping to fund -- and in the midst of the tour, one of the recovering addicts starts crying.

The drama begins when Bush walks into a room where two of the addiction program's residents are playing table tennis while four others watch.

"I got a heckuva forehand," Bush says as he shuffles in with his wife, Laura.

"Not that good," Bush jokes. The place erupts with laughter. "What's happening here besides a hot Ping-Pong game?" Bush asks. He sits down between two of the men, on the arm of a sofa.

Meeuwissen, a resident for 16 months, immediately begins telling of his attempts to follow God's way. An added bonus, he says, is that "being here, we get to meet you."

"That may not be the top prize," Bush laughs. He has kept his presidential opponent, Al Gore, crisscrossing the country on defense this week, trying to shore up support in states he'd never expected to be close. Bush, meanwhile, has been the cock of the walk, prancing and mugging and dancing like a mid-'80s NFL receiver in the post-TD end zone. But CityTeam brings out a strong humility, which the men seem to respond to.

"Thank you for sharing that with us," Bush tells Meeuwissen when he finishes speaking, patting him on the arm. He turns to his right where Dominadur Limosnero, 31, sits, and asks him to tell his story. As Limosnero begins, Bush turns back to Meeuwissen, winks and pats him on the arm.

It doesn't take long before Limosnero starts sobbing. It's unclear if this is because he's nervous, or especially fragile, or supremely comfortable in Bush's presence -- or, most likely, a stirring combination of all three. But Limosnero, a recovering alcoholic and former drug-addicted gang member, says, "The Lord opened the door for me here ... I'm just sick and tired of gangs and you know, everything."

Bush and two other residents pat the man's arms and back reassuringly. "I love it here," Limosnero says. "It's a better life." There's a pause.

"That's about as powerful a statement as you can get," Bush says. "That's why we're here. God bless you."

"OK," Bush says, calling an end to the proceedings. It turns out that the "OK" just applies to the media.

And as the dozen of us in the Ping-Pong room are escorted into the next room, Bush takes a moment alone with the men. I linger and try to eavesdrop.

"I appreciate your testimony," Bush says sincerely, no cameras or reporters around.

"You're a man," he reassures Limosnero.

It's recovery-speak with a born-again foundation. He tells them how important it was that members of the media heard their testimony, but before I can hear why that is, a Bush press aide pulls me away.

This is the most appealing side of Bush, the side that honestly seems to care -- about addicts, about kids in failing schools. The side that has taken away the substantial edge Gore once had with female voters. If every voter could see this display, Bush could put this election away for good.

It is tough to imagine Gore connecting so well with these recovering addicts. He is almost always incapable of communicating deep and sincere emotion in settings like this without coming across as a phony. At a rally last week in Kansas City, Mo., for instance, Gore paused a moment in the midst of a tribute to the late Gov. Mel Carnahan. He sighed. He slumped a bit. And it seemed completely disingenuous, as if someone had scripted the expression for him ahead of time.

You can't dismiss Bush's ample heart as a campaign strategy. Marvin Olasky, one of Bush's main advisors on "compassionate conservatism," once told me that Bush "has the view that people can change. And one reason I suspect he has that view is that he changed himself, through God's grace." Indeed, Bush touches on this himself in his Tuesday speech on faith-based programs, before the CityTeam crowd and assorted Silicon Valley guests. "I quit drinking in 1986, and I haven't had a drop since then," Bush says. "And it wasn't because of a government program, by the way. It was because I heard a higher call."

His compassion seems to extend to the borders of what he himself has gone through. But how far beyond?

Olasky says Bush is good when speaking to recovering addicts because "he can identify because of the change he himself" went through. Just as his personal struggle has manifested itself in greater empathy for less fortunate addicts, the visit to CityTeam provides insight into the limits of Bush's compassion.

Within a minute or so after I catch snippets of Bush's private thanks and reassurance to the CityTeam residents, Bush and his wife come into the billiards room, and his dedication to his evangelical Christianity -- which I found moving just minutes ago -- gives me the willies. He starts again with his standard-issue guy-schmooze.

Laura's "a heckuva pool player," he tells us, before getting serious.

"We just had a powerful testimony next door about this program," he says. "The state ought to welcome programs such as this that change people's lives." He talks about true change and recovery. "Government can't do that," he says.

But how, he is asked, will a group like CityTeam get funding without running into obstacles created by the separation of church and state? Bush says that the church can't be the state, and the state can't be the church.

"The danger is that government causes a program like this to lose its mission," Bush says. "A lot of programs say, 'I don't want to touch government money because the bureaucracy will come in and force us to take the picture off the wall.'"

He motions toward a painting of Jesus.

"What I'm saying is we're not going to let that happen."

Just as Bush is able to engage so effectively with the residents who are fellow born-again recovering addicts, he seems unable to understand why someone who doesn't believe in Jesus wouldn't want tax dollars going into proselytizing Christian activities. He similarly didn't get it when he opposed the recent Supreme Court decision that denied Christian public school students the right to force their prayers into the ears of everyone who attended their Friday night football games. These are not examples of intolerance or cruelty as much as, apparently, just witlessness. A few weeks ago, Washington Post reporter Terry Neal, an African-American, was sitting on the Bush campaign plane listening to his Walkman.

Bush came to the back of the plane and approached him, in front of a number of other reporters.

Neal now will only say that he and Bush generally get along well, and that, no, he wasn't listening to rap. But the issue seemed to speak to a larger ignorance -- the self-contained cluelessness of a man who makes it to 54 without realizing it might be offensive to assume that an African-American wearing a Walkman is probably listening to Snoop Doggy Dogg.

The incident is not unique. About three weeks ago, Ron Claiborne of ABC News was getting off the Bush campaign plane.

These are not stories that damn Bush as contemptible, but they do suggest a man with limited experience with people -- at least people not just like him.

There's also Lynn Novick, a co-producer of Ken Burns' PBS series "Baseball," who had the rare treat of accompanying Bush to a Texas Rangers game in the summer of 1994, before he was elected governor. "He was a very gracious host," Novick says. "He was perfectly pleasant. Until he changed the subject."

Bush mentioned something about Yale University, from which he graduated in 1968. Novick graduated from Yale in 1983, so she brought it up, thinking it would be "like a bonding thing."

"When did you graduate?" Bush asked her, as she recalls. She told him. That's when Bush told her that Yale "went downhill since they admitted women."

Bush replied that "something had been lost" when women were fully admitted to Yale in 1969, that fraternities were big when he'd been there, providing a "great camaraderie for the men." But that went out the window when women were allowed in, Bush said.

"He said something like, 'Women changed the social dynamic for the worse,'" she says. "I was so stunned, shocked and insulted, I didn't know what to say."

She says two things offended her the most: "That he would think that, but almost more so that he would say that to a woman who went to Yale."

So the question is raised: Just how compassionate is Bush? Many of the female reporters on the Bush campaign press plane -- ones who like Bush, generally -- don't think the candidate is capable of relating to them as he does with their male counterparts. He does indeed seem more capable of turning on his famous "charm," when he's dealing with a man, usually a white man and especially a white man from Texas who can talk about baseball.

Gore is relatively incapable of human contact with most earthlings, of course, and his press plane is packed with naysayers who find him charmless and think he has a veracity problem. But Gore isn't marketing himself as a candidate who's capable of great empathy. Indeed, his wife Tipper's Sunday excoriation to a crowd -- "This isn't 'The Dating Game'! You don't have to love Al!" -- was pathetic in its utter acceptance of the fact that after 24 years in public service, Gore is still essentially a political clod.

Bush, on the other hand, is supposed to be the charming guy, the "compassionate conservative," the one who will bring people together. But his inability to comprehend those not like him -- like, say, gays and lesbians, the underclass, Jews, those offended by the race- and gay-baiting shenanigans of his and his allies' South Carolina campaign -- make this task seem all the more Herculean.

This has, of course, reared its head before. There was Tucker Carlson's article in Talk magazine last year that recounted Bush's callous mocking of the death row pleas of Karla Faye Tucker. His constant campaign smiles when asked about the death penalty even led to one question during the third presidential debate about why he always seemed so "gleeful" when talking about capital punishment. And of course, his clumsiness and seeming indifference toward the family of James Byrd Jr. suggests, at least, a discomfort that would suggest his abilities as a racial healer may not extend much further than the multi-culti pageantry of the Republican Convention.

We know Bush can be a compassionate man, but the question continues to be over how far his "armies of compassion" extend past his own honest, but narrow, life experiences. But we know at least this much: Wealthy people and born-again addicts need not be concerned.