I drink, smoke dope, pop Vicodin and take Prozac. Why hasn't my body given out yet? 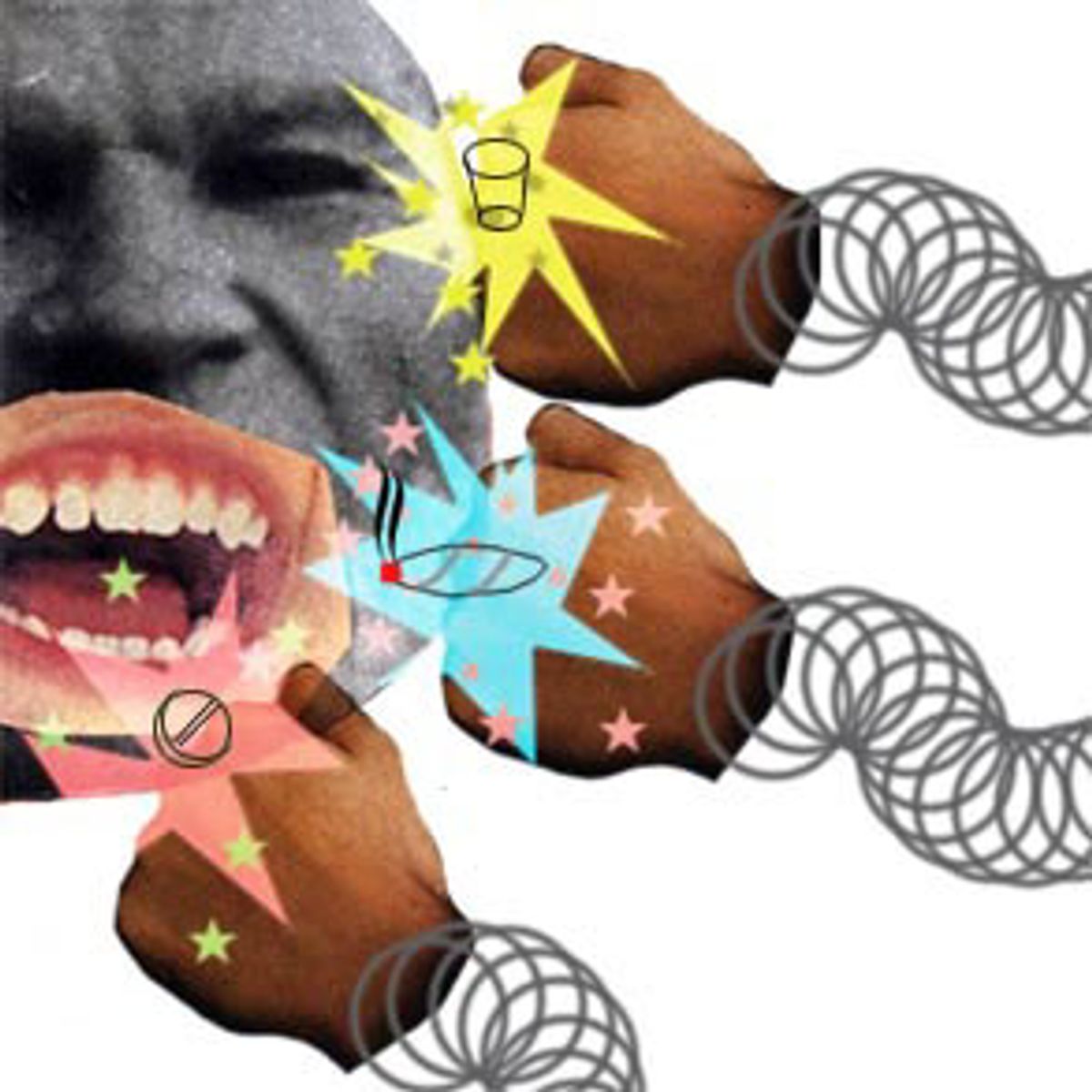 I have been playing with various substances since I smoked my first joint in Aspen, Colo., in 1981. I have smoked (more or less) every day since and have suffered none of the clichéd pitfalls (yet). I've received a B.A., have fathered two children and have an income of $54,000 and a mortgage.

I also have been a heavy drinker since my Memphis State days and continue to indulge -- whenever the demands of work and parenting will allow, usually later at night. Add in the fact that I have recently discovered a means of obtaining painkillers (Vicodin) via the Internet and I'm feeling a little like a junkie, which -- let's not be coy -- I am.

I've also been taking Prozac (20 mg) for the past six months to try to combat my obsessive-compulsive behavior. (I told my doctor that I wanted to try Prozac to help me stop smoking -- which is partially true, just not tobacco.) Anyway, that seems to have no effect lately, but I'm constantly surprised by how my physical stamina has held up against my barrage of abuse.

I've had annual physicals with complete blood work, and my reports all come back fine. My liver numbers are fine, my blood pressure is fine, and although my cholesterol is rather high, my doctor seems almost annoyed at my insistence on having these checks. My question is, are there some people whose systems can take it better or for longer than others? It seems to me that I should have been dead years ago. So many others have died from their overindulgences (Keith Whitley, Alexander Gudonov, various rock stars, etc.).

So why am I still around? I can't keep this up forever. I know this question seems stupid, but I am totally serious: When am I going to give out?

You wonder why you are doing fine despite regular heavy drinking, daily smoking (we assume you mean pot) and occasional Vicodin (generic name: hydrocodone). So do we! You've given us a lot to talk about -- regular and heavy alcohol use, drug combinations, use of addictive narcotics and resistance to antidepressants. Where to begin?

First, you are doing a couple of things right. Limiting your drug use in response to the demands of parenting and work means that you have the ability to keep it under control. You are also having regular physicals and working with a doctor -- at least to some degree, if not fully honestly -- on your substance abuse problem. This is all good. Now, on to your various indulgences.

You didn't tell us how much you are drinking. If you are drinking no more than a couple of drinks every day, you probably won't experience significant negative health consequences, and you may even derive some cardiovascular benefit. On the other hand, if you are drinking more than that, you might be surprised to know that heavy alcohol use can be the most dangerous part of your daily routine. As you guessed, your liver and cardiovascular system suffer the most from alcohol use. And alcohol could be playing a part in your elevated cholesterol levels.

One joint a day of marijuana is unlikely to cause serious physical problems in the short term, and the long-term risk of lung and cardiovascular disease is less than from smoking one pack of cigarettes. However, the marijuana will impair your memory and could well impair your job performance. Its sedative properties and anxiety-reducing effects may leave you unmotivated to do much of anything.

Even the Vicodin, if you keep it under control and don't become addicted, won't have terrible physical consequences, although it could put a crimp in your sex life and make you constipated. It is a fairly mild narcotic, and many people take it as a prescribed medication for years without suffering any ill effects.

Our greatest worry is about your combined use of all these psychoactive drugs. You certainly can't be as sharp mentally as you would be without the drugs. If you smoke pot every day, it is basically always in your system, since it takes your body up to a week to clear 90 percent of even one dose of the active ingredient, tetrahydrocannabinol (THC). Adding this to the alcohol and Vicodin means that you are overloading yourself with too many depressant drugs. Furthermore, the more drugs you take, the greater the chances of experiencing a dangerous interaction with prescribed drugs should you get sick or have an accident.

Also, things must not be going so well for you emotionally if you are taking antidepressants. Frequently, heavy alcohol drinkers also suffer from depression, and it is not clear if that results from their drinking or if they are drinking to cope with an underlying depression. The only way to really figure it out is to stop drinking.

You are obviously worried enough to go to a doctor for Prozac. You might have picked a good strategy for dealing with your substance abuse. Prozac might have some ability to decrease the addictiveness of several drugs, including alcohol and narcotics. And you correctly observe that the effectiveness of antidepressants can wane. This antidepressant resistance is just your brain adapting to the chronic presence of the drug. Talk to your doctor, who might suggest increasing the dose or switching to another antidepressant.

As for why you are physically OK so far -- well, you haven't set the bar very high when you compare yourself to the entertainers you listed. On the rock star scale of overindulgence, you are an amateur. Nevertheless, you are engaged in a pattern of drug use that could lead to serious problems, and we are glad you are concerned.