Diary of a crone

My remedy for night sweats and bitterness comes straight from "Macbeth": Curse and plant fear! 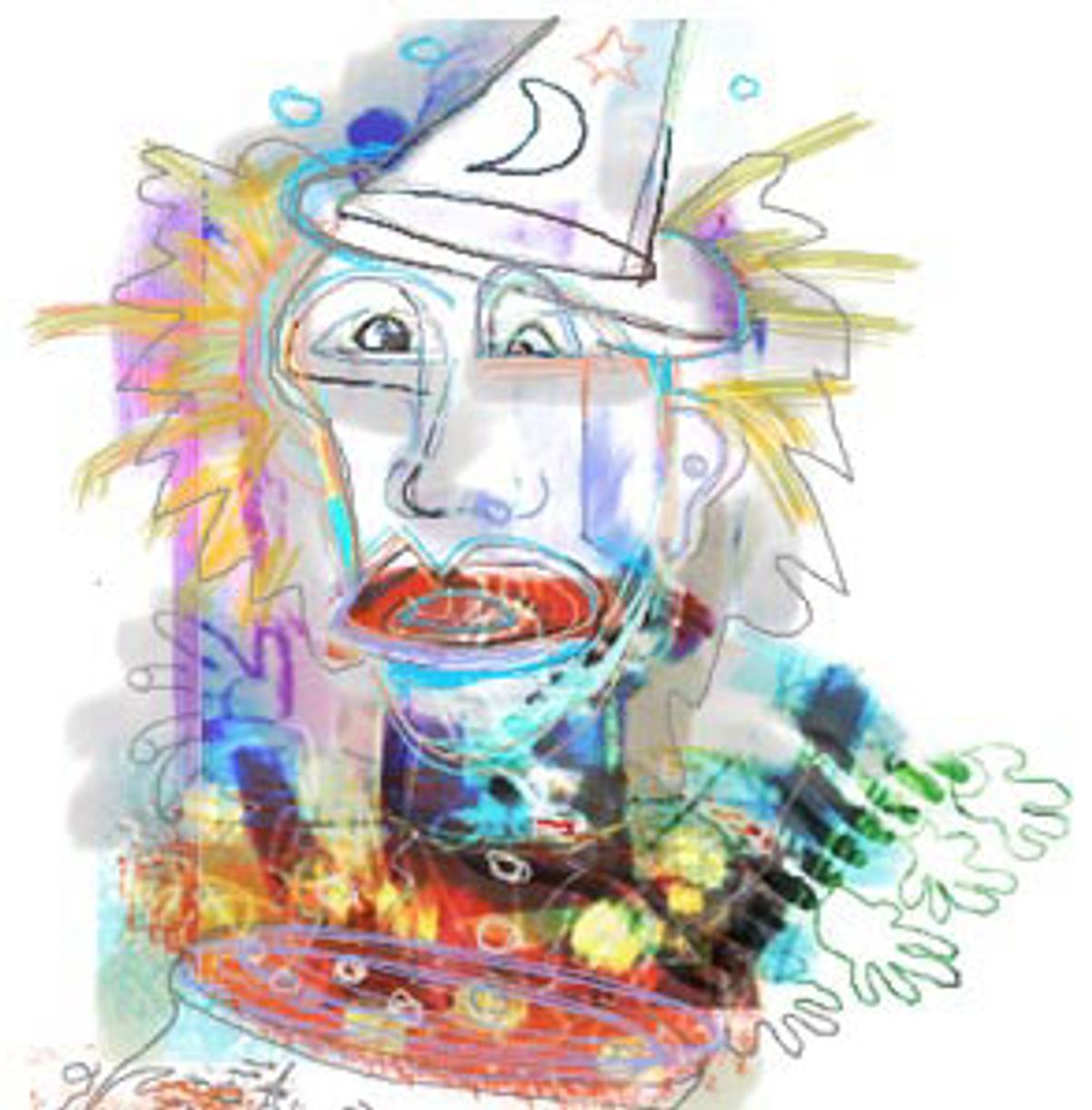 I saw "Macbeth" this summer, probably for the third time, but now I am 54, so I understood it differently. In the darkened theater, as the witches shuffled onstage and began their incantations, I saw them for what they are -- sleep-deprived, menopausal crones suffering from night sweats, vaginal atrophy and loss of libido.

So there they are in the middle of the night, drawn together because none of them can sleep, and that stuff they're pouring into the caldron is a desperate attempt at relief. Menopausal women will ingest an astonishing array of weeds and herbs. Need proof? Go to any health food store and look down the most crowded aisle. There you'll find middle-aged women offering advice and criticism, sharing experiences and demanding information from the woman at the store who has been assigned this detail. At the Whole Foods Market near me this woman has gray hair and the pale calm of someone who eats a lot of grains and sips lukewarm herbal tea, slowly.

But back to "Macbeth." The crones are gathered there feeling sweaty; they are not in a good mood at all, and the thought of all that passion between Macbeth and his lady is agitating. They can remember what it was like to be young and wait for your man to come home, to brush your long thick hair until it shined and rub scented oil into firm breasts and upright nipples. They can remember when their husbands could sit through a whole play without getting up to pee, and when the guys' slightly enlarged prostates didn't cause the same need five times a night. The crones' fragile grasp on sleep has been more than one time ruined when their men clomped to the privy, banging doors and making the stairs squeak as they lumbered down the hall. In winter the men simply use the chamber pot, and the weak stream trickling against the porcelain has a sad sound to it, yet another reminder of the indignities of age.

So the crones know that men have a hard time, too. But they don't really care. What men endure does not come close to menstruation, childbirth and menopause. And anyway, Macbeth and his lady are not concerned with any of that right now. They are thinking about wet mouths and other parts. They have that tense feeling in their lower abdomens. The tingling too. The crones know that the best way to soothe your own suffering is to make sure somebody else is having a worse time. There has to be a way to curse this reunion, and the crones find it. They meet Macbeth in the forest and plant fear. This always works. Bravado is only veneer, easily peeled away once you loosen the edges. The rest follows a predictable course. Shakespeare always punished greed, ego and passion.

I was thinking about all this at 3:30 in the morning. I woke up at 2, covered in sweat, and I pulled back all the covers. By 2:20 I was shivering and I pulled them back over me and went to sleep. At 2:45 my husband started tossing and turning and that was it. I could give up on sleep for the rest of the night. It occurred to me then that God doesn't like women. God likes bears. Four-hundred-pound bears give birth in their sleep to cubs weighing 8 ounces. They don't even know that anything has happened until this cute little thing crawls up to nurse. I don't know what happens to them at middle age. Not much, probably.

In those early morning hours I got comfortable on the sofa and turned to a book on herbal remedies for self-declared crones. These remedies make sense to me on a gut level. I'd rather not take estrogen derived from the urine of pregnant mares. I've also got this idea that since I failed at natural childbirth and begged for painkillers in the end, I ought to be able to at least have a natural menopause. So I came to the book with an open mind; but after reading just three chapters I developed a seething and unattractive resentment toward women with the time to wander around vacant lots foraging for weeds.

I learned that an oat straw bath might help cool and relax me. So would garden sage taken as a tincture or an infusion. So would lavender, nettles, chickweed, valerian, chamomile and more, preferably harvested and prepared by me. The next chapter suggested masturbation. Very relaxing, said the imaginary crone narrator, especially nice if you break open a vitamin E capsule and rub the oil on your vulva. Plumps it up in just a few weeks. On the subject of sex, I learned about herbal aphrodisiacs, plus yoga, plus the health benefits of the act itself. Use it or lose it is the prevailing advice to counteract vaginal atrophy -- a term I wish I had never heard.

Then there was a section on meditating that took me through the usual sequence of relaxing myself muscle by muscle. I noticed that I was clenching my jaw again. My periodontist wants to make me a $600 mouth guard to stop me from doing this, because it is causing my teeth to become loose. Recent gum surgery has corrected the problem for now. The mouth guard would be more long term, he says. It seems it's OK to be a crone at heart, but nobody wants to look like one, complete with missing teeth.

It was 4:30 a.m., and I was still wide awake, when I read the sentence that put me over the edge. "If none of this works for you go for a walk, read a book and take a nap later on in the day."

The church bells at the end of my street chimed five times and I gave up. My husband, Roy, wandered in from the bedroom and found me on the sofa. I was staring into space muttering about herbs and oat straw baths. I told him that I might have to leave him and live alone for a few years. He could keep the house. I'd find a furnished room near the diner where I planned to work once I quit my job. I could work the breakfast shift and then I could take naps in the afternoon.

I started to cry when the dog came into the kitchen looking for breakfast, because I knew I couldn't take him to the furnished room with me. I cried some more thinking about how sad it would be for my daughter to endure another divorce. The only thing that made me feel good was seeing how bad I was making Roy feel. In fact, the more worried he became, the better I felt, just like the witches in "Macbeth."

I drank lots of coffee and had a shower and went to work. Around 10, I called Roy to tell him I wasn't leaving him after all. At noon I called again to say I actually liked my job and probably wouldn't be filling out an application at the diner. At 4 he called me to ask what he should buy for dinner. By then I really needed that nap. I told him I didn't care what we ate. "I've been cooking for 35 years and I'm sick of it. I'll eat a bowl of oat bran," I said. "Maybe I'll put some seaweed on top. Maybe I'll stop by the hairdresser on my way home and have all my hair cut off so I'll look like I'm having chemotherapy and everyone will be nice to me. Maybe you'll want to leave me because I'll look so ugly. Go ahead. Find a younger woman. See if I care."

He sighed. Something about that sigh had eloquence to it. I could see his shoulders rise and fall. I could hear just the slightest beginnings of laughter in it. "Find a younger woman," I said, "and I'll curse the two of you and you'll never have sex." I felt like a witch. I felt great. Being nice is an overrated virtue. Cackling anger is much more satisfying. I believe there's just a tiny part of Roy that thinks I am capable of anything, and I plan to keep it that way.