As the culture of stupidity makes inroads into fields once reserved for eggheads, could excessive brain mass be holding you back? 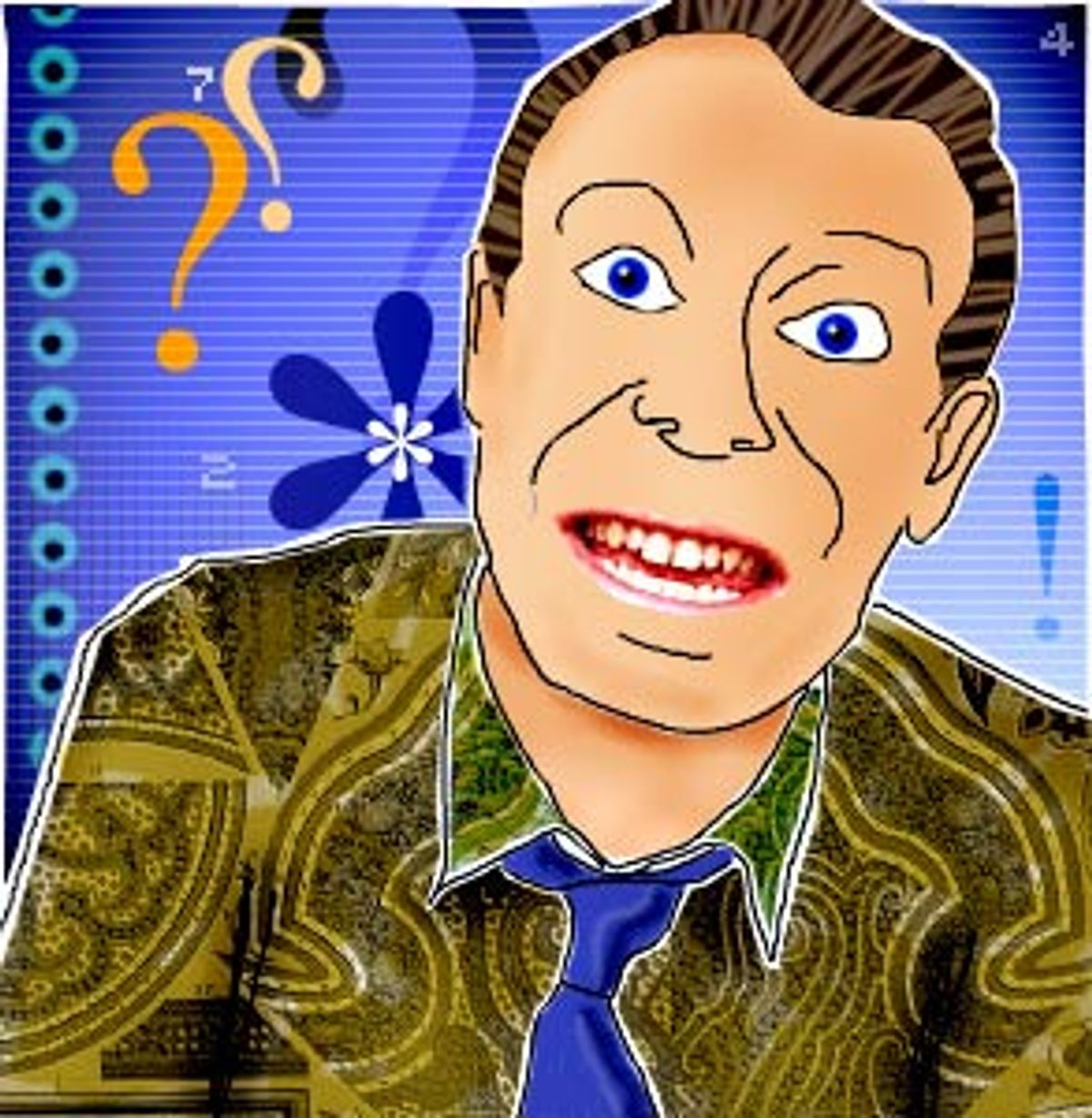 It's no secret that intelligence can be a great deterrent to political success, but can it get in the way of other pursuits? Theories proliferate, but one thing is certain: Intellectual mediocrity has never been more financially rewarding than it is today. In an age when barely literate college graduates routinely refer to themselves as "overeducated," playing -- or, better yet, being -- dumb is a core requirement for getting ahead.

America has never been dumber and never been richer. Coincidence? Hardly. A cursory scan of the cultural landscape reveals that knowledge combined with reasoning capacity may be a significant factor in failure and could seriously hinder a person's potential to accumulate cash and other assets.

Intelligence: A tool of the past

In a last-minute bid to court the yahoo vote, both Al Gore and George W. Bush performed in a "Saturday Night Live" special intended to highlight their hilarious shortcomings. Had the candidates been women, they might have instead appeared in a special issue of Playboy. (Turn-ons: NAFTA, GATT, rainy days. Turn-offs: environmental regulations, mean people.) But, for now, American voters are sold on the idea of a commander in chief who can take a wounding personal joke and is never too busy to tape a protracted comedy sketch. Meanwhile, as the candidates vied for yuks, Movieline magazine was compiling a list of the 10 Most Intelligent Actors in Hollywood, where the loftiest honors are bestowed on the actors who best portray the biggest morons.

Just how smart is too smart?

There is nothing more frustrating than knowing the correct answer to a complicated problem and finding that people not only don't recognize it but are too stupid to be convinced that your answer is correct. Being right is hollow if no one is there to witness it, meaningless when witnesses can't tell a right answer from a wrong answer and dangerous when witnesses are wrong but large and belligerent. Yet, people still waste valuable life years acquiring knowledge and experience that, in the end, do them more harm than good.

While stupidity is on the rise, there are indications that the 18-to-35 demographic, a group that tends to favor employment in the trivial sector, may be at the greatest risk for intelligence-induced failure. No longer confined to the demographic's traditional career choices (actor, rock star, rock critic, model, publicist and CEO), the culture of stupidity is making encouraging inroads into professional areas once considered magnets for eggheads. All manner of lucrative professions are saying no to those given to public erudition and "Yesss!" to those who favor public eructation.

Intellectual: Largely thanks to leading modern intellectuals, being intellectual is not just for intellectuals any more. If you're going to be a Fellow in a Think Tank, it's of paramount importance to be a regular one. In an attempt to make pedantry more palatable to the American public, scholars have begun to appropriate the language of imbecility and to couch their elitist criticisms in easy-to-understand grammatical errors. Long, boring books need catchy titles if they are going to appeal to a large audience. "The Dumbing of America" comes to mind. Come to think of it, even "The Dumbing of America" sounds slightly pretentious. Aspiring intellectuals considering a career in taking potshots at idiots might want to consider titles like "The Moronification of the Nation" or "Dumb like Me."

Likewise, academics in the Liberal Arts have been at the vanguard of the creation of a new Yahoo class. As early pioneers in the fields of Irrelevant and Offensive Studies, academics have helped create a brave new world of semiotics majors with theses in traffic signs and the omphalogy of Britney Spears. They have also helped increase classroom attendance with the ingenious use of X-rated classroom materials.

Celebrity interviewer: Gone are the days when a journalist could subtly skewer a big star with impunity. If a celebrity interviewer wants to be invited on future junkets, he or she must learn to suppress judgment and laud, laud, laud! If there's nothing to say, say nothing with style. Helen Hunt? "As focused a vet as you'll meet in the world of entertainment." Tara Reid? "An irrepressible blond." Ozzy Osbourne? "He's still going nonstop." Rosie? "Nice." See? It's easy.

Network newsmagazine anchor/local news anchor: Being intelligent can seriously inhibit one's ability to seem intelligent without laughing, a crucial part of this sought-after métier. The ability to grasp the significance of what one is reporting could also seriously impair one's ability to segue into a pet-related segment without dwelling on airline crashes and really bad weather. Studies show that viewers respond to a likable robotic quality and greatly enjoy imitating anchor enunciation for comic effect.

Marketing executive for a large corporation: Pushing the product is paramount. Whether the product is of any use at all is none of your concern. Overly intelligent people prone to crippling bouts of conscience do poorly in this upbeat field, which is all about stressing the positive -- especially in court.

Daytime talk show host: Not only is intelligence a professional liability in this lucrative field, it is a good way to get one's butt kicked. Refrain from passing judgment on guests, concentrating instead on their propensity for violence. Remember, it's not exploitation if it's on TV, and there are literally thousands of overeducated college graduates who would kill for your job.

The future of stupidity

Have we outgrown our use for intelligence? Studies show that professionals in all walks of life are being held back from fulfilling their dreams because of excessive brain mass. By the same token, companies with ad campaigns featuring the words "easy to use" are steadily drawing customers away from companies whose products are 10 percent more challenging. Will stupidity replace intelligence as the trait of choice for today's successful professional? Only time will tell. In the meantime, ambitious Americans might do well to remember this: In the new global economy, worrying about being too smart is not just for candidates and bimbos anymore.