Public Citizen No. 1 is still a bachelor, and I want him. 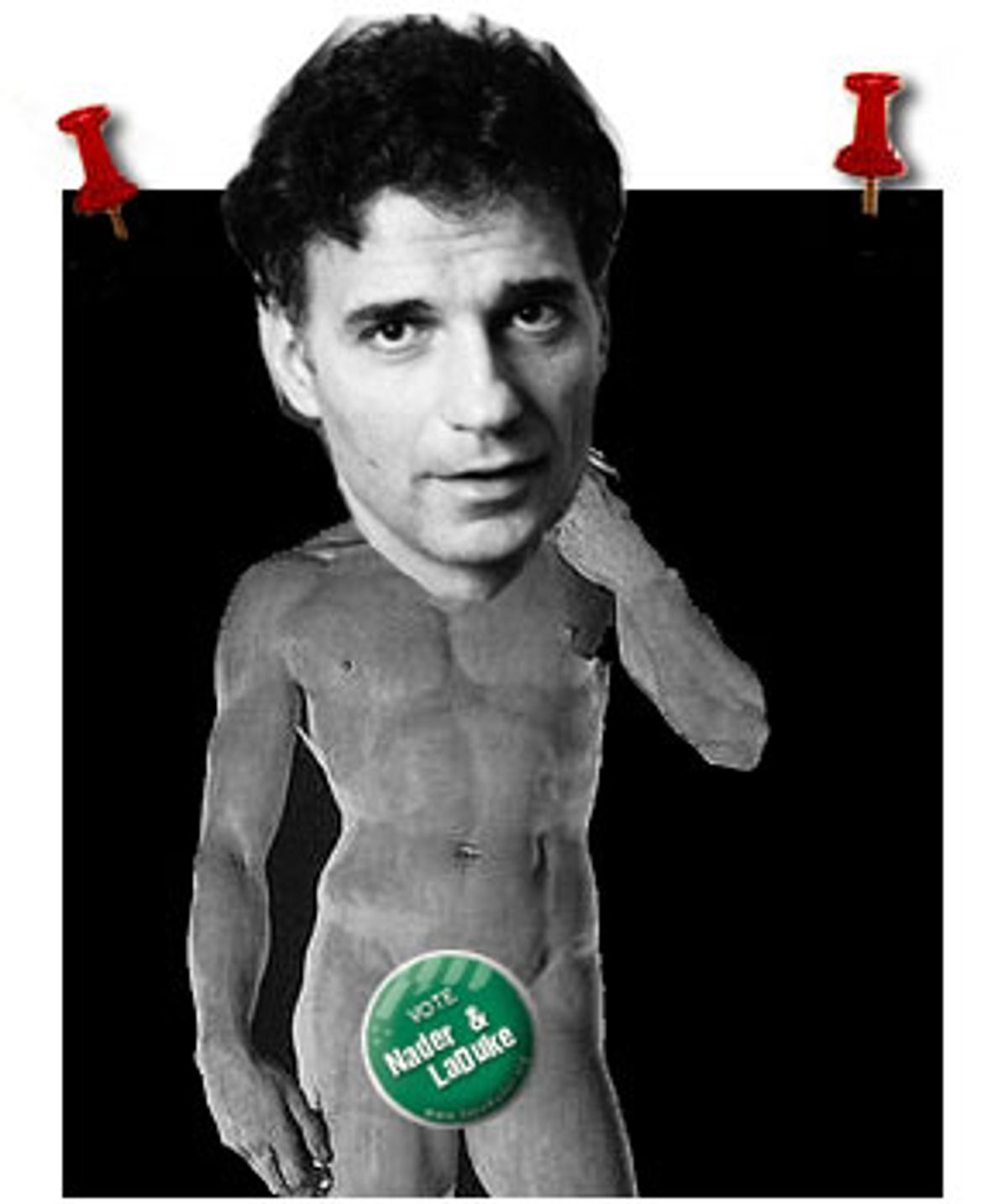 I covered both the Republican and the Democratic National Convention last summer and, let me tell you, from the perspective of a young, hotblooded girl journalist in need of (wink, wink) post-deadline stress relief, pickin's were slim. The ruddy-faced young men who flocked to the GOP's mantle in Philadelphia looked like a cross between the spring clearance sale at Brooks Brothers and Opening Day at Soldier Field, and couldn't quite articulate their enthusiasm about the convention without reference to the free food. I traipsed by a Young Hispanic Republican party one night, hoping to find something a little more, um, newsworthy, and instead found a bunch of pudgy Cubans in suits grooving to Ricky Martin and still whining about how the commies stole their family plantations. Oh, please.

I went to Los Angeles more hopeful about Democratic offerings, but soon realized that I would rather bed down with a circus animal than any of those schmucks. Picture a mass gathering of former high school class presidents who think that their clunky use of words like "awesome" and "cool" actually renders them awesome and cool. They preferred listening to President Clinton prattle on inside the convention center to the infinitely more exciting Rage Against the Machine concert-cum-riot going on outside, a litmus test for undesirability if ever there was one.

Then I got assigned coverage of Ralph Nader's presidential campaign and finally figured out where the cuties come home to politically roost. They appeared by the thousands: bright-eyed, broad-shouldered boys locking up their muddy mountain bikes outside campaign events. Boys with worn hiking boots, revolutionary slogan T-shirts and grad student glasses. Boys who knew how to tie good knots, tell good jokes and roll good joints. Boys who gathered to swill microbrews after Nader's speeches, progressive putty in the hands of any reasonably resourceful woman activist. ("So, is that a Noam Chomsky reader in your pocket, or are you just glad to see me?") Indeed, covering Nader's campaign affirmed for me the greatest perk of being a journalist, which is the permission to shamelessly hit on cute boys under the pretense of an interview.

So you can imagine my surprise when in the midst of all this yumminess, I fell for Public Citizen No. 1 himself.

My crush on Ralph Nader started more than a month ago at the Milwaukee airport -- albeit slowly, as all things go in the Midwest. I flew in early from New York to meet his modest entourage, coming in from Washington for a three-day tour with Michael Moore. Milling in the baggage claim area while a campaigner checked on our transportation, Nader turned to me and said, "You look like a reporter." He extended his hand -- our first touch! -- and I shook it cordially.

My desire for Ralph grew in increments, peaking at times, subsiding at others, but generally driving my heart and other organs into a frenzy. I loved the way his tongue flicked when he said "wage slave," the way his lips curled on "globalization." I felt jealous when perky college girls with unbelievably straight hair and matching jeans gathered at his van window to coo, "We love you, Ralph!" I became mesmerized by the Nader that few see. Onstage, he may seem gaunt, dour and about as appealing as a box of Kleenex, but backstage he was a tender sympathizer, a charming wit and a dashing beau. I was flush with want.

Traveling through Minnesota, Michigan, Pennsylvania and Ohio, my obsession with Nader started affecting my work. The articles I filed were little more than thinly veiled love letters. One day, he told me that I was the hardest-working reporter covering his campaign -- the implicit punch line being that I was often the only reporter covering his campaign. But never mind, he had clearly hit the ball into my court. I tossed it back in a press conference at Yale with a question designed to seduce, something terrifically leading about why the gazillionaire-run Commission on Presidential Debates was afraid of his anti-corporate rhetoric. "That sounds like a biased question," he said, smiling as the other journos held out their microphones. "I'm a biased reporter," I replied with a wink. Bull's-eye.

The fact of the matter is that Ralph Nader is an eligible bachelor, a vastly underrated quality that he could surely milk for the middle-aged divorcée vote. A friend of mine's father is a longtime colleague of Nader's, and said that not only has he never been married but he has never even had a girlfriend and is definitely not gay. Although he's famously averse to discussing private matters, I nosed around for more dirt on Nader's seeming asexuality. Someone along the campaign trail recalled a comment he had made about choosing as a young man between family life and civic life. He obviously has married himself to civic duty with all the self-sacrifice of a priest, but as we know, even priests get hot and bothered under those collars sometimes.

It was in Maine that my crush on Nader finally came to a head. I was riding with his advance guy while he and his traveling secretary followed us. We stopped at a rest area to stretch, and the twilight sky was a romantic cerulean blue. The pine trees glowed in the moonlight and the air felt like a cool bath.

"So," I said to him, "I hear there's going to be more hummus and pita where we're going." (Note: Almost every stop on Nader's campaign has some variation of Middle Eastern food spread out backstage. I always imagine all the local Green Party organizers trying really hard to be culturally sensitive to Nader's Lebanese origins by searching out their town's only pita baker.)

"Yes, well my supporters think that I don't accept any soft money," he replied, "but in fact, I have the garbanzo PAC all tied up." He was so drolly adorable, I wanted to ravish him right there in the rest area's parking lot. That night in the hotel I could barely sleep a wink, imagining all the obscene things that Nader and I could do with seat belts.

The campaign has rumbled on and, needless to say, Ralph and I have yet to consummate our love. Still, I've begun feeling less like a reporter and more like a stalker as I meet him in random cities like Des Moines, Iowa, that I would never visit otherwise. And he always seems glad to see me, as if my presence around his campaign is somehow important (or maybe just perplexing). Under all the clamor labeling the presidential candidate a spoiler, a gadfly, a rebel and an egotist, I know what he really is. A young woman at his recent speech in St. Petersburg, Fla., apparently knew it as well -- she held up a sign that said, in big block letters: "YOU ARE MY LOVE GOD."

Au contraire, my dear. He's mine.

Jennifer Bleyer is a reporter for News for Change (www.newsforchange.com).