What makes a man? In the gritty, "Full Monty" countryside it means getting comfortable around tights and tutus. 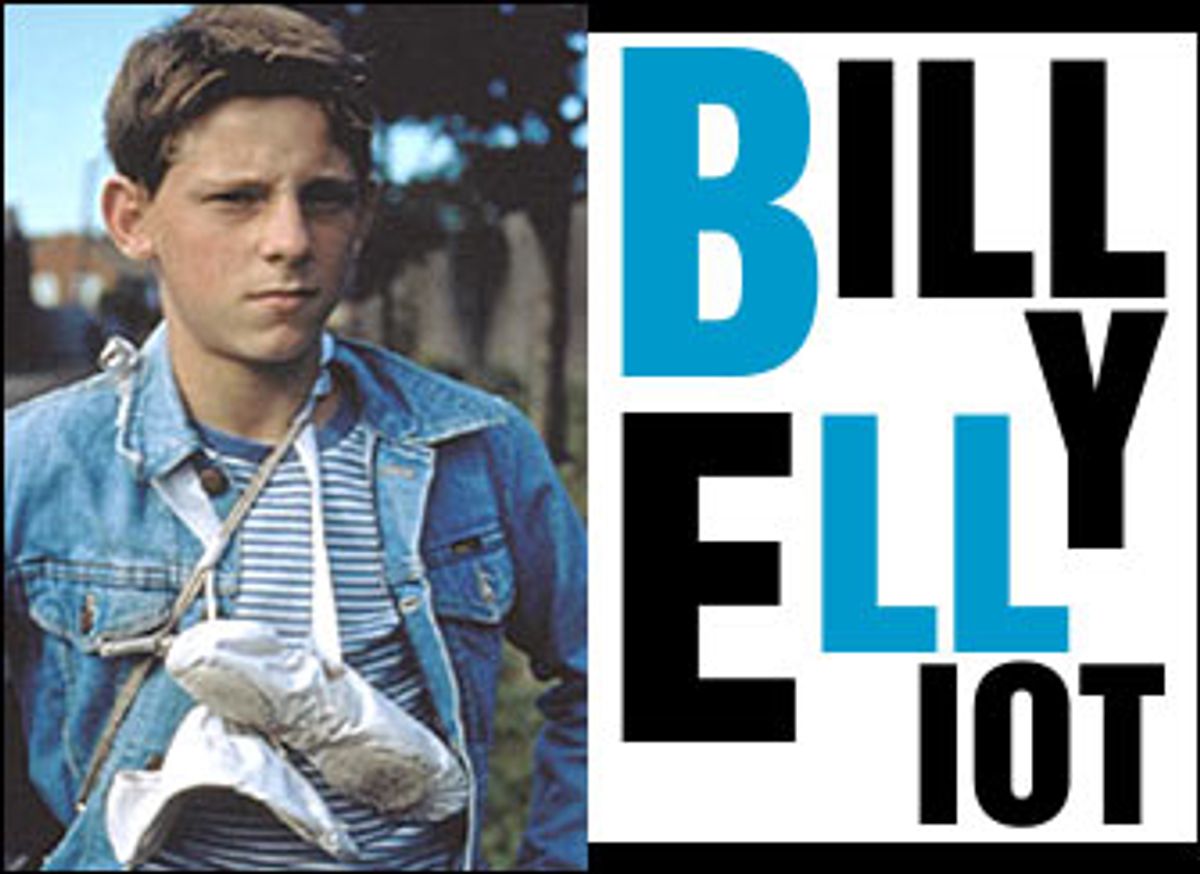 It's turning out to be a good year for busting gender roles. Already this fall's most appealing heroes have included a sensitive yet secure male nurse ("Meet the Parents'" Greg Focker) and a tough female boxer ("Girlfight's" Diana). Now, there's the titular hero of "Billy Elliot," a scrappy coal miner's boy who yearns for the lyrical world of ballet.

The timing of the film, already a smash in the U.K., may be coincidental, but it's also providential. Because while director Stephen Daldry's "Billy Elliot" undoubtedly takes a page from every underdog musical from "42nd Street" to "Flashdance," it's also a surprisingly wise and funny meditation on the nature of what it truly means to be a man.

In northern England in 1984, Billy Elliot's widowed father (Gary Lewis) and older brother spend their days hurling eggs and epithets at Thatcher's scabs while a historic miners' strike cruelly drags on. Eleven-year-old Billy (Jamie Bell), meanwhile, takes care of his senile grandmother and schleps to his weekly boxing class, despite universal agreement that he's "shite" at the sport. Yet there's something about the kid, the way he carries himself and the determined gleam in his eyes, that suggests that there is something special inside him waiting to be released. When a bunch of tutu-ed little girls and their blowsy, cigarette-smoking instructor begin sharing space at the gym, Billy instantly hears his real calling: He's hopelessly drawn to dance. The only problem, he knows, is keeping his newfound passion from his macho male relatives.

"Billy Elliot" is the kind of cheerful crowd pleaser that makes it easy to overlook its more complex pleasures. It is, joyfully and unabashedly, an old-fashioned movie musical -- complete with rousing, dancing-in-the-street numbers, an urchin hero and moments of shameless tear-jerking. But it's also smarter and more sincere than your average Hollywood "gotta dance" story, smoothly paying homage to the musicals of yore while cleverly showcasing its own winning style.

Early on, the film seems headed down a pleasant but familiar path, setting the sensitive, misunderstood prodigy against his roughneck family. Billy's coal-hauling, union-loving dad is outraged when he discovers his son has been spending his afternoons hanging out at the barre, and predictably resorts to shoving and sputtering about "poofters." And Billy's teacher is, predictably, an imposing taskmaster with a heart of gold, a stock character portrayed in an above-average performance by Julie Walters.

But just when you think you know what's coming next, "Billy Elliot" begins to surprise you. A more conventional film might present a glossy, romantic picture of Billy's hardscrabble surroundings, pitting him in opposition to them. Here, Billy's harsh world is credibly suited to the boy's burgeoning artistry. Billy is who he is not despite his environment, but somehow because of it.

Where the film really takes off, however, is in its exploration of family dynamics and the mysteries of the male psyche. Billy rejects conventional gender expectations because it simply doesn't occur to him to do otherwise. He's as stoically unfazed by his father's jabs to his masculinity as he is by a young male playmate's hopeful romantic interest. And he's easy enough in his own identity to love the dance, to tenderly attend to his ailing grandmother, to miss his dead mother, to listen to T. Rex and to never imagine that his actions make him less of a man. As a boxer, Billy is a gawky runt, taunted by his coach that the sport is "man-to-man combat, not a bloody tea dance." But in the ballet, his instructor tosses him a pair of slippers and dares him to put them on, and Billy intuitively understands that the old rules of what's girly and what's manly no longer apply.

Even more encouragingly, the skinny little boy's supreme self-assurance has a ripple effect on his family. As Billy's dad gains respect for his son's gift and holds his family together through the strike, he learns the difference between toughness and true strength. Portrayed by Gary Lewis, he maintains a convincing mix of grit and grace.

But the best thing "Billy Elliot" has going for it is its star. Jamie Bell ricochets skillfully between being a vulnerable child and a defiant adolescent, sometimes in the space of a moment. He's an eager-to-please boy, an elegant hoofer, a furious, frustrated youth trying to dance his demons right out through the soles of his feet. It's a breakthrough performance, one that captures the character's blossoming with radiant charm.

At times, "Billy Elliot" goes for easy tugs on the heartstrings and at least one too many twinkle-toed excursions through the bleak streets of Durham, but there's something so appealing about the whole business, it's impossible to resist. Like its predecessor, "The Full Monty," it's a movie that proves that out of the least likely settings can come wit and sincerity. And if a little bit of gender subversion gets tossed in the mix, so much the better. "Billy Elliot" succeeds on its warm heart and exuberance, but it also slips in a neat life lesson as well: If you want to walk like a man, it's OK to get up on your toes.