Who cares about the fate of privacy, of all things, when you can watch three sexy babes stamp out crime in zip-off suits and high-heeled boots? 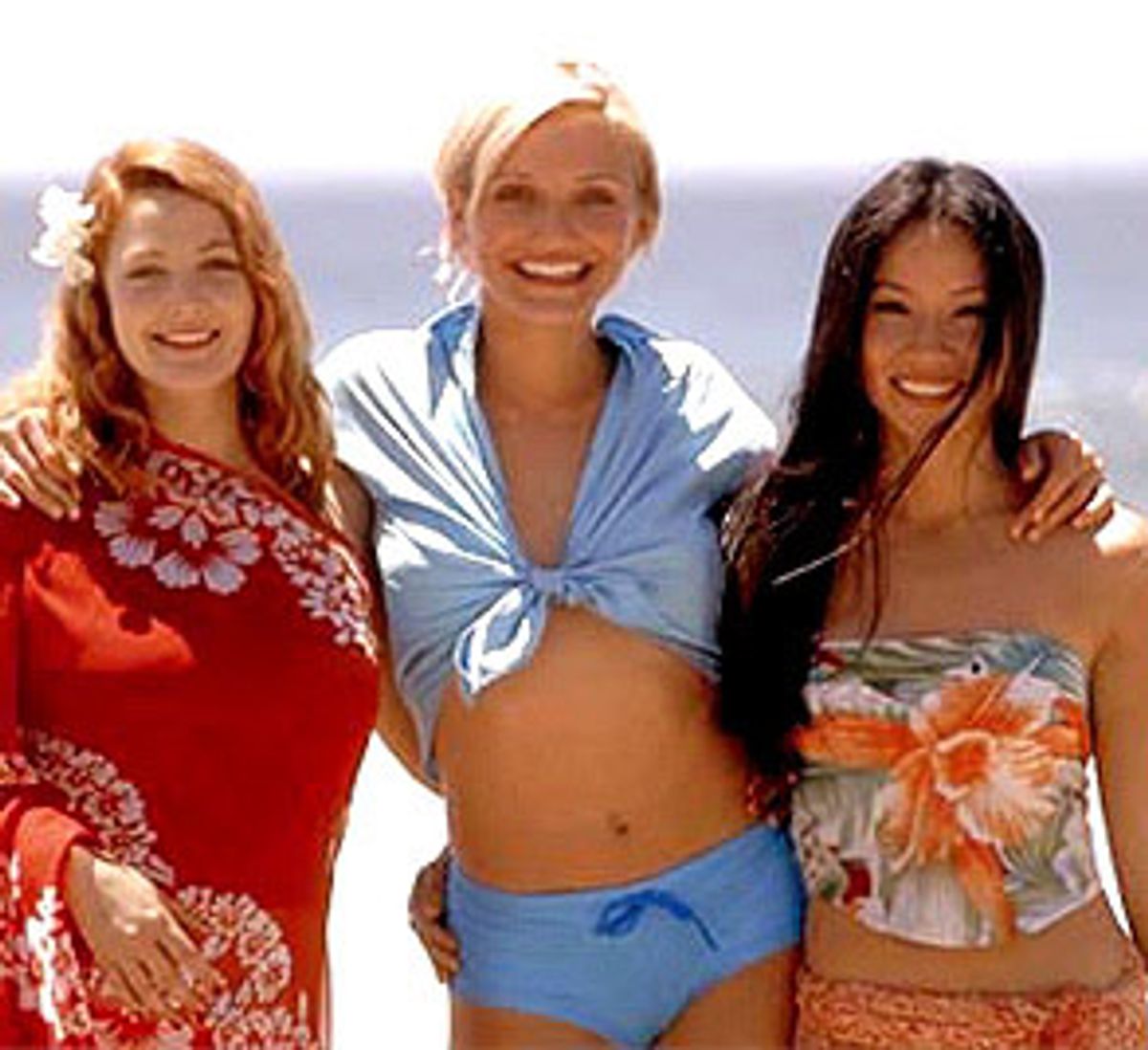 There's something supremely satisfying about watching dazzlingly gorgeous crime fighters dangle from helicopters, chop-socky bad guys and run across rocky shorelines, all in high-heeled boots. Fashion flaunted in the face of practicality can be one of life's little pleasures, but few of us have the chance to take it to the extremes that Cameron Diaz, Drew Barrymore and Lucy Liu do in "Charlie's Angels."

Those three great-looking girls are pretty much the only reason to watch the kitsch-laden "Charlie's Angels," and they're almost enough. The feature debut of the inscrutably named McG (his previous credits include music videos and commercials, which in recent years have come to constitute a kind of MBA for action directors) is just another aggressively frenetic action movie with no plot to speak of. The fight sequences are shabbily handled, mucked up with so much quick cutting and so many cheesy close-ups that they're almost visually meaningless.

But there's plenty of visual meaning in the way Diaz (as Natalie, the spacey but smart one), Liu (as Alex, the aloof but smart one) and Barrymore (as Dylan, the kittenish but smart one) go about their business in outlandish get-ups that include geisha robes, abbreviated Swiss yodeler's outfits and zip-up speed-racer outfits (va-room!). The picture may be a mess in terms of pacing and just plain sense, but it represents a small triumph in tone: Like Betty Thomas' "The Brady Bunch Movie," it finds just the right level of self-mockery. (In an early scene set on an airplane, the in-flight film is "T.J. Hooker: The Movie.") There's enough vibrancy in the way Diaz, Liu and Barrymore strut their stuff and flip their hair -- repeatedly, and often in slow motion -- to keep us wondering what they'll do next, even when the movie's hyperventilating pace becomes wearying.

These are new angels -- they're not playing the exact same characters seen in the '70s TV series (roles filled, in the show's first season, by Farrah Fawcett, Kate Jackson, and Jaclyn Smith). But as in the original series, groovy chicks Natalie, Alex and Dylan all work for the unseen Charlie, who delivers their assignments to them via a little desktop speaker. (John Forsythe is the voice of Charlie here, as he was in the series.) With the help of their lieutenant, Bosley (Bill Murray, in a sometimes amusing but disappointingly unshaped role), the only liaison between them and their boss, they tackle tough missions, like finding kidnapped mild-mannered software wunderkind Eric Knox (Sam Rockwell), at the behest of his company's president (Kelly Lynch).

Knox's company has developed a voice-identification technology that's far superior to traditional fingerprinting; in the wrong hands, it could mean, as one character ominously puts it, "the end of privacy." The angels follow a trail to the kidnapper that includes Knox's rival Roger Corwin (a devilishly deadpan Tim Curry) and a silent henchman known as the Thin Man (the always-creepy Crispin Glover), who has a weakness for fondling the locks of hair that he pulls from the angels' scalps during their numerous tussles.

As a director, McG is far too hyperactive to hold the story together neatly, but he and cinematographer Russell Carpenter ("Titanic") do come up with some nice optical touches, as when the lithe Diaz dons a snow-white scuba suit (she resembles a chic version of Woody Allen's costumed sperm) to invisibly infiltrate an all-white high-tech command center. The big problem is that the sequence doesn't last nearly as long as it should -- it's the kind of image you'd like to savor.

But at the very least, all three actresses are remarkably game, up for whatever goofy lines or rough-and-tumble action the story requires, and they play off one another with the casual, semicompetitive affability of pals at a pajama party. Of the three, Liu is the hardest to warm up to -- she has an icy glamour-girl veneer -- but she does throw off a measure of sadistic good cheer disguised as a leather-clad efficiency expert who threatens a group of nerdy software engineers with a collective spanking.

Barrymore is her usual charming self. She manages to be cherubic and dazzling at once, especially when, zipped only halfway into one of those skintight motor-speedway outfits, she sweet-talks a nervous chauffeur from the passenger's seat, swooping over to lick the steering wheel.

In terms of crackerjack acting skills, though, Diaz is the most sparkling of the three. Her physical comedy is a delight here, especially the goofy dance she does in her Underoos after awakening from a happy dream that put her at the center of a Busby Berkeley-inflected disco extravaganza; she's a marvel at transforming her normally dignified physique into a gangly windmill of flailing limbs. And her comic timing, already proven in movies like "A Life Less Ordinary" and "There's Something About Mary," glitters here, too. When a winning but hapless bartender (Luke Wilson) she meets while undercover asks her on a date, he tells her, "I'm going to get tickets," to which she responds with a massive grin and a tidal wave of unhinged glee, "I love tickets!" Awkwardly flirtatious and ditzily sensual, she's like a dada disco bunny.

The soundtrack includes terrific, too-long-forgotten numbers like Tavares' "Heaven Must Be Missing an Angel" and weird oddities that should have been buried forever (Alan O'Day's "Undercover Angel," anyone?), but even the weirder choices suit the picture's freewheeling nostalgic wackiness. And then, of course, there are the fashions: plenty of trim leather jackets and ever so slightly flared trousers, paired with those omnipresent high-heeled boots -- slightly more reasonable versions of the original angels' stretchy print shirts and polyester bell bottoms. At one point, Barrymore even sports a set of those swooping Farrah Fawcett wings. They're like a mini love letter wrought with a curling iron, just the kind of detail you'd expect in a movie that, for all its faults, is at least sealed with a lip-gloss kiss.