Nobody had to tell me that my dad was drunk. Now I am a dad -- and mum. 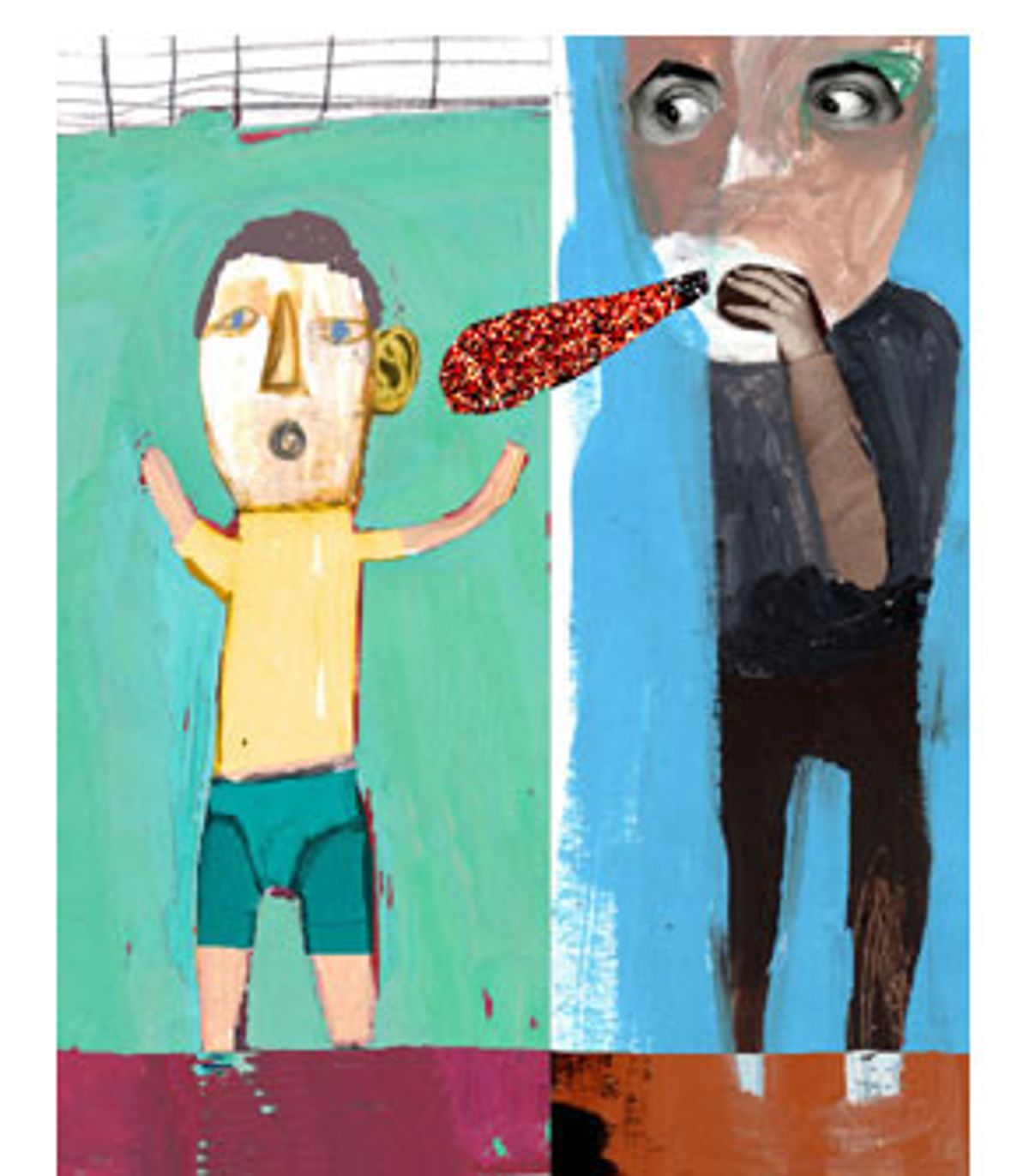 George W. Bush said he'd kept his bust for drunken driving a secret because he didn't want his twin daughters to know. When the question arose if it wasn't better to tell children the truth, Dubya didn't answer. It pains me to say good things about George W. Bush, but I don't think I would have answered either. Not if the children were listening. Nor would I write this, if I thought they read Salon.

I used to be a full-disclosure father. I delighted my tiny sons with stories about shooting friends with BB rifles. I trotted out my nastiest and most obscene jokes. We laughed and laughed.

Then I heard that one of the boys had been repeating the jokes at school. He might easily have been suspended. "What if they don't find the BB gun stories amusing either?" I thought. "What if they find them instructive instead?"

Since then I've inhabited that anxious purgatory of half-truths and omissions where most of today's responsible parents with "youthful indiscretions" seem to dwell. Information is released in my house on a need-to-know basis. I don't want my boys to drink. If they do drink, I don't want them to be alone with their remorse.

When my 14-year-old drank Scotch at a sleepover, he told me about it. So maybe this method is working. Besides it's only fair that I should know when my children are drinking. I certainly knew when my parents were drinking. Does "always" ring any bells?

What strikes me most forcefully about the Dubya bombshell is that it is a bombshell at all. It's extraordinary how far we've come, or gone, depending upon your point of view. And how quickly we've forgotten.

"Here is the last of that generation of chain smokers who woke the world in the morning with their coughing," my father wrote in the introduction to "The Stories of John Cheever," "who used to get stoned at cocktail parties and perform obsolete dance steps like the 'Cleveland Chicken.'" And boy did they get stoned.

Nothing secret about it either. I was very little when I was taught how to lay my fingers along the side of a crystal glass so that if my father needed four fingers of Bellows Club Bourbon, I knew how to get it. Flattered to be asked, thank you. Nobody had thought up the word "enabler" yet.

I remember one festive evening when a close family friend -- a full partner at Morgan Stanley, if memory serves -- fell down the stairs to the dining room. It wasn't the fall that made the evening remarkable, but rather the fact that the banker's highly polished shoes left scuff marks up above the handrail. Scuff marks, which could be seen and admired the following morning.

My parents lived in a house with a drive that was lined with stone. My mother still lives there, although on more temperate terms. I remember standing out in the drive in the evening and watching as the dinner guests backed up until they hit the stone wall, crushed the lenses of their brake lights and then drove off, the tinkle of broken glass playing against the roar of exhaust.

Home from boarding school, I went barhopping one night, and woke up at 5 a.m. with a splitting headache and the vivid recollection of having been in an accident. I was terrified. I knew boys who had been threatened with Culver Military Academy for less. Finally, I got out of bed. I went down to the drive and examined the car. Then I breathed a great sigh of relief. The family Studebaker was so badly scraped up you couldn't tell which was my accident, or even if I'd had an accident at all.

I remember sitting in the boot of my father's red Karmann Ghia when he was driving my girlfriend back to her parents' house. The car jumped off the road and went right over one of the wooded islands, sometimes left where several roads come together. Large rocks rushed by, branches swept over the hood. We bumped back onto the road and went on as if nothing had happened. Nobody said anything either. What was there to say?

Yes, I'm perfectly aware of the dangers of alcohol. My own beloved father had a terrible fight with the hooch, a fight he very nearly lost. "Allied to my melancholy is my struggle with Demon rum," he wrote in a letter to his friend the novelist Josie Herbst. "There is a terrible sameness to the euphoria of alcohol and the euphoria of metaphor -- the sense that the imagination is boundless -- and I sometimes substitute or extend one with the other. My performance is sometimes comical. I leave my typewriter at a quarter after ten and wander downstairs to the pantry where the bottles are. I do not touch the bottles. I do not even look at the bottles and I congratulate myself fatuously on my willpower."

Drinking seems to me a little like driving a motorcycle, or jumping out of airplanes. Maybe you'll get tagged. Maybe you won't.

Please don't conclude, from all this, that I was primarily a victim of my father's illness. I was, of course, a victim of my love for him. But then so was he a victim of his love for me. I was a fat, arrogant, lonely little boy. During dinner, I'd get my feelings hurt and go upstairs and hide under the bed. My poor father would climb the stairs after me, lie down on the floor and talk at me through the dust bunnies.

I'd violate parental edicts, go to a neighbor's house and see Wolfman movies, which left me horrified. I'd wake up at night screaming. I'd go into my parents' room, crawl in between them, fall asleep and wet the bed.

We did the best we could.

It's great that people don't drink or smoke the way they used to. The gains in health and sanity should be substantial. I'm afraid sometimes, that we've lost something also. We're all so scared now. More scared than I was of the Wolfman. We're frightened of cancer, and of BB guns. We seem also to be afraid of the truth.

Which may be why we so rarely get it.

Benjamin Cheever is working on a book about the job market, due to be published next fall. His last novel is "Famous After Death."