The number of the Beast is on every cellphone in Hollywood these days. What accounts for the recent upswing in Satan's career? 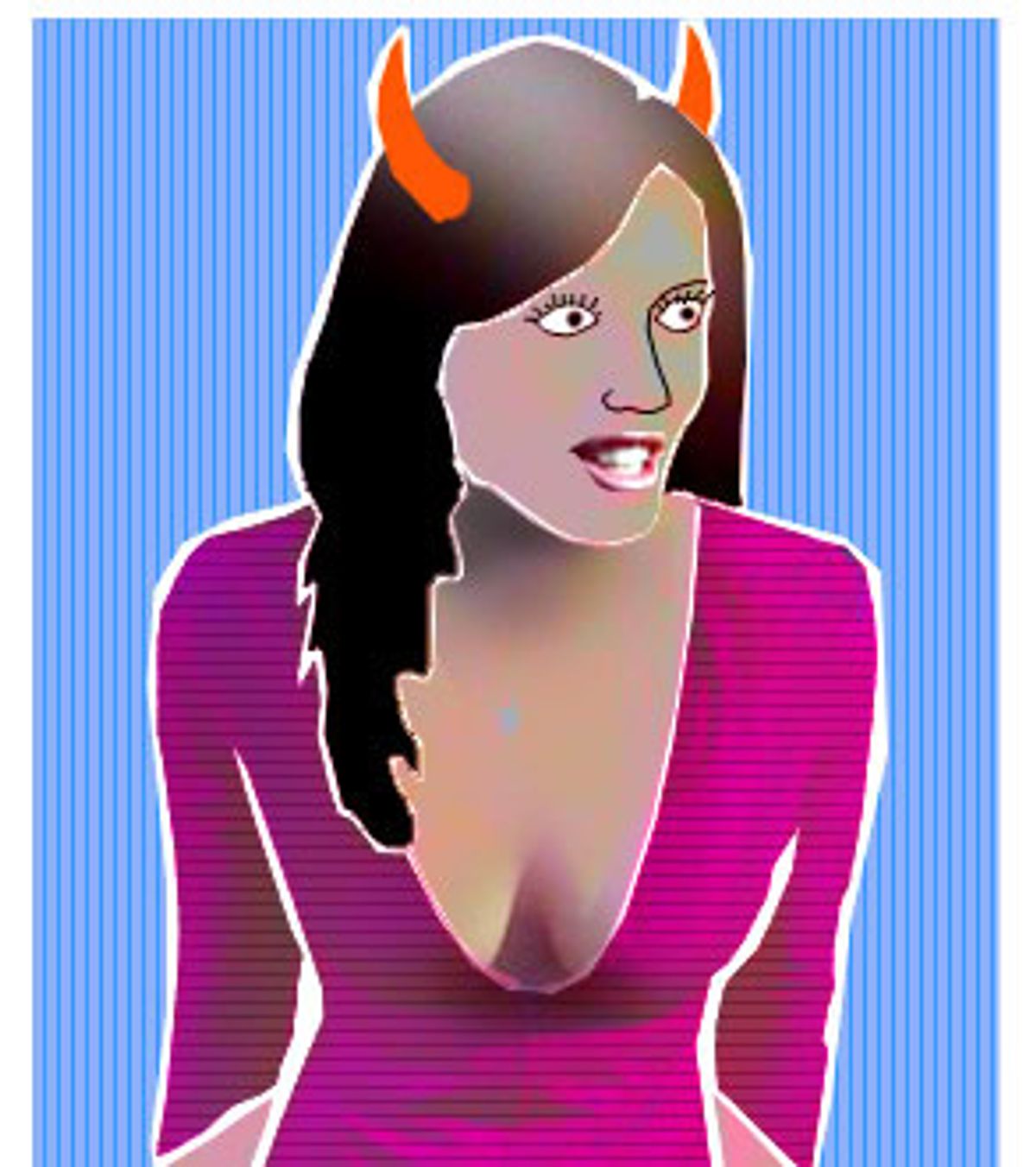 The devil, a reliable antagonist with a well-developed back story, has always been a popular Hollywood villain. Since a tour-de-force comeback in 1997's "The Devil's Advocate" landed him in the limelight, however, Satan has been edging perilously close to overexposure. When Time and Newsweek covers shimmer side by side on the horizon, it will be official: Satan will have lost his heat.

But for now, the box office is possessed. Satan has appeared in more than six films this year alone. "Bedazzled," "Little Nicky," "Lost Souls," and "The Exorcist" are currently in wide release, following "The Ninth Gate," "Stigmata," "Bless the Child" and last year's "End of Days." Satan was also featured in "South Park: Bigger, Longer & Uncut" and three failed television series, "G vs. E," "Brimstone" and "God, the Devil and Bob."

Why the current Satanic obsession? Chestnuts about the popular fascination with questions of good and evil are of no use in explaining the trend. Goodness is no longer a goal for most, and the notion of hell doesn't scare people quite as much after they've been audited by the IRS, lunched at the Hard Rock Cafe or lived in Los Angeles. Plus, the old Satan -- let's call him Old Milt -- has always had a rather poetic image, whereas the truly scary villains of today are either dangerously moronic (teenage satanists, for example) or terrifyingly vapid and self-possessed. They are not moody Priest-baters given to fits of envy and depression.

And young, evil-savvy filmmakers have obviously caught on. In order to make the devil -- that lonely, morose anachronism -- freshly terrifying, Hollywood has started putting a human face on the Horned One. This can only mean one thing: Real people have officially surpassed the beast in the frightening department. Furthermore, it would appear that Satan has abandoned the far-flung provinces of hell once and for all, trading them in for the coke-paved sidewalks of Wall Street. He has earned an MBA and opened a law firm. He's buff and brilliant and British. He's on the campaign trail. He looks, on a good day, like Elizabeth Hurley. On a bad day, like Al Pacino. He is a paper-shredding, double-dealing, nightclubbing, model-shtupping Prince of Darkness, and he'll put the fear of God into anyone who crosses his path. No, not with his pitchfork, not with little pointy horns. But by suing them, bilking them, seducing their wives, preying on their physical insecurities, running for office and generally, legally and unrepentantly screwing them over.

Like any textbook neurotic narcissist, Old Milt has a history of trauma, disillusionment and self-obsession. His psychological profile -- which also describes some of our best friends -- is oddly familiar. This is a devil grappling with inner demons.

Poor Old Milt, come to think of it, is a loser. He's the Willy Loman of the underworld. He's jealous of his (much younger) step-siblings, for whom, of course, he was cruelly shoved aside. And he's still trying to get back at his indifferent father for it. Old Milt is not inscrutable, he's just messed up.

Jonathan Taylor Satan, on the other hand, knows what it means to move on. He does not brood, sulk or ask why. Jealous of no one (why would he be?), he is sleek as an otter and unrepentantly evil. Faye Dunaway in "Network" is scary in a similar way. Old Milt, most recently seen in "South Park: Bigger, Longer & Uncut," is scary in a Faye Dunaway-is-"Mommie Dearest" way.

In "Little Nicky," Harvey Keitel plays a beleaguered Prince of Darkness saddled with Rodney Dangerfield for a father and Adam Sandler for a son. He also has other offspring who have left hell to go wreak havoc on Earth. So the devil sends Little Nicky up through a manhole to bring them back. Here is Satan as the harried family man, a bad devil with good intentions, who never gets a moment's peace -- someone millions of Americans can relate to.

According to contemporary Italian philosopher Giovanni Papini, the devil represents bread without sweat. This, roughly, also happens to be the American Dream. What is Satan, after all, if not a 25-year-old who wakes up to find he's worth $100 million? Sad, lonely, ugly, foul-smelling Beasts whose only human acquaintances are ordained don't much scare today's young capitalists. Unnaturally tall 27-year-old married rich girls on "Sex and the City" do. Hellfire is Old Testament, and Jonathan Taylor Satan knows it.

Recently, another kind of new movie devil has emerged. She is a babe. She doesn't work on Wall Street or own her own PR firm, but the money comes in just the same. She is a hands-on, grass-roots Satan who acts locally, not globally, and focuses on the little evil details of everyday life, like a depraved event planner or Martha Stewart. Superficiality can be very frightening when taken to the extreme.

In "Bedazzled," she causes parking meters to expire with the snap of her fingers and swings by a hospital to replace patients' pills with M&M's and Red Hots. She is sexy, unattainable and wears clothes designed to make other people cry.

And this is a beast everyone -- even Old Milt -- can fear.