The tooth will out 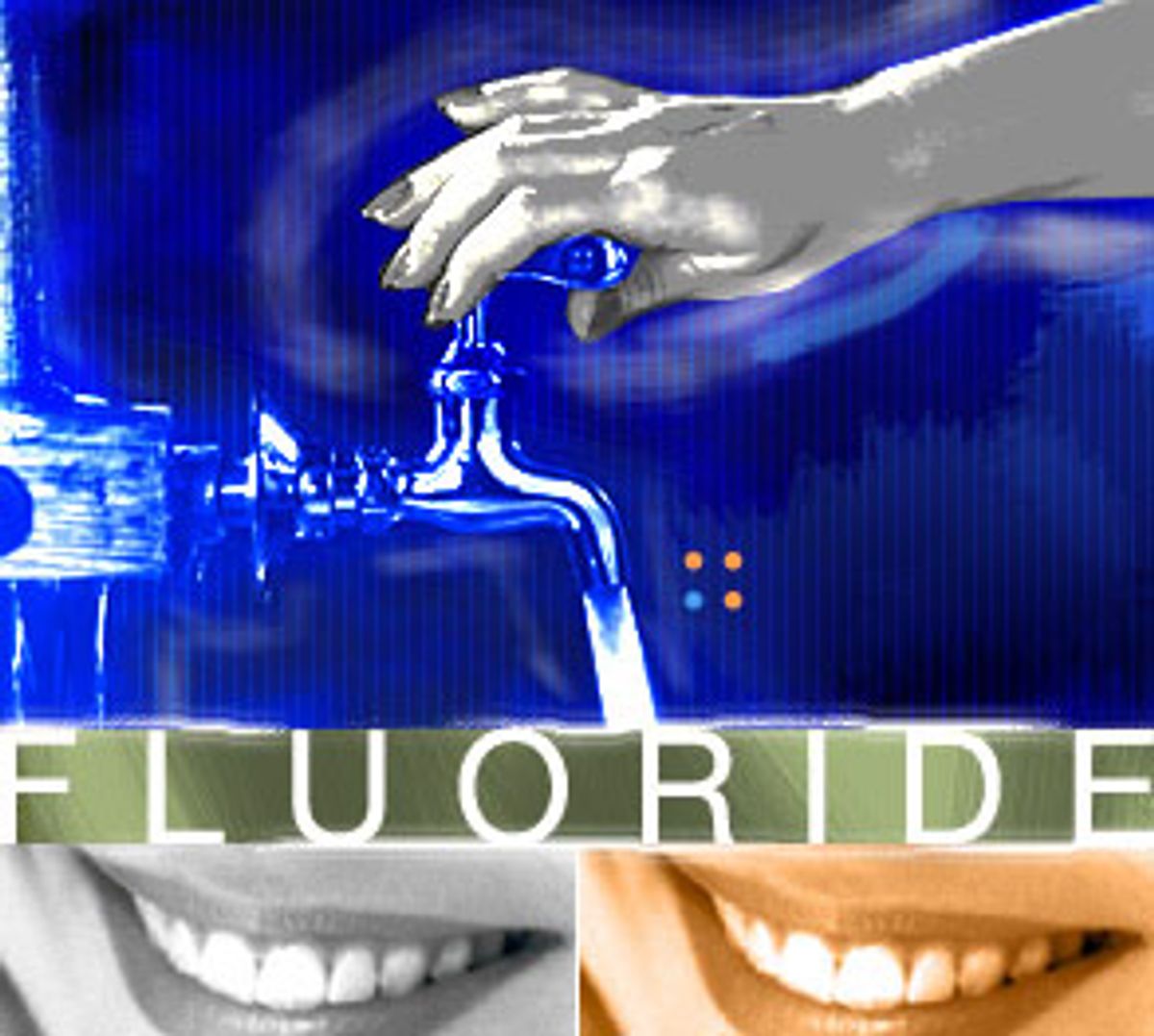 Paul Connett, a chemistry professor at New York's St. Lawrence University, always makes sure to pick up a few tubes of fluoride-free toothpaste when he visits his home country of England. He just can't stomach the idea of putting fluoride on his teeth by using a brand like Crest or Colgate.

But if the idea of brushing with fluoride makes Connett queasy, the thought of drinking it makes him sick. It is, he says, a dangerous substance that doesn't belong in the human body. "It makes as much sense to swallow fluoride as it does to swallow nail varnish," Connett said.

Unfortunately for Connett and those who think like him, fluoride-free drinking water in the U.S. is becoming almost as hard to find as fluoride-free toothpaste. Fluoridated water flows out of most taps in the country, including those of the great majority of the country's largest cities. Connett, a leader of America's fluoride-is-poison crowd, wants to clear the waters. He and his supporters will have their biggest opportunity in memory on Election Day, when water supplies serving more than 3.8 million Americans will be at stake.

On Tuesday, voters in Salt Lake City; San Antonio; Spokane, Wash.; and several towns from Arizona to Vermont will decide whether to add fluoride to their drinking supplies to improve dental health. Meanwhile, southern Nevada voters will consider whether Las Vegas should flush the compound out of its water system.

Armed with the support of a small group of scientists, the water police hope to build on a base of recent anti-fluoride victories. Once derided as right-wing kooks, they have gained the support of some reputable environmentalists and leftists, including Ralph Nader. But to win at the polls they will have to fight off voter apathy and a reputation as being members of the lunatic fringe. They'll also have to beat back well-funded health groups that have adopted an above-the-fray strategy of refusing to debate their opponents in person.

Fear of fluoride is nothing new, although the opposition movement has gone through various incarnations during the 55 years that scientists and dentists have been trying to dump the compound into public water supplies. Ironically, science first discovered fluoride's benefits in the early part of this century by stumbling upon what happened when people got too much of it. Researchers noticed that children raised in Colorado Springs, Colo., suffered from severe staining and mottling of their teeth, but were also blessed with a low rate of tooth decay. A check of the water supply revealed that it was naturally fluoridated, according to a history compiled by the National Institutes of Health.

Over time, scientists examined fluoride to figure out how much or how little would prevent tooth decay without destroying the teeth. In 1945, Grand Rapids, Mich., became the first major city to fluoridate its water. The cavity rate dipped significantly, inspiring other cities and towns to follow, but it didn't take long for groups like the ultra-right John Birch Society to see fluoridation as an invasion of personal rights.

"The rhetoric of the 1950s is partly crazed and totally paranoid, but revealed a level of distrust and fear that was profound," said Char Miller, a history professor at San Antonio's Trinity University who specializes in the environment. "They saw an attempt of the government to literally invade the body of the citizenry, and in the process dominate their minds and control their behaviors in a way that was emblematic of what we understood the Soviets to do to their own citizens."

Critics didn't have much luck, however, as dentists and health departments clamored for fluoride. City after city began adding fluoride at the rate of about one part per million to their water supplies. Philadelphia, San Francisco and Chicago did so in the 1950s, followed by New York, Detroit and Dallas in the 1960s. Now, according to fluoride supporters, of the country's 50 largest cities only San Diego; San Antonio; San Jose, Calif.; Honolulu; and Portland, Ore.; don't have fluoridated water -- although San Diego's city council recently voted to add the substance to the water supply and Honolulu is considering it.

The most recent federal statistics, from 1992, estimated that 56 percent of the nation's population was served by fluoridated water. The number is certainly higher now since some large cities have joined the trend since then. Fluoridation is not as popular overseas, however. Most countries in Europe, for example, do not fluoridate their water because government officials and scientists do not view it as necessary for the public health.

But fluoride foes have had their own successes, especially in California, where local officials are resisting a recently enacted state law requiring cities with populations over 100,000 to fluoridate their water. In the San Diego area, critics have convinced several communities, including the city of Escondido, Calif., (pop. 120,000) to refuse to do so. Santa Barbara, Calif., has also declined.

The critics say fluoride is a threat to both public health and personal freedom. Indeed, fluoride can be toxic if taken in large doses. Warning labels on toothpastes and fluoride rinses tell users to not swallow, and children under six are advised not to use toothpaste at all.

Critics charge that fluoridation causes numerous health problems, including cancer, lowered intelligence, weakened bones and damage to reproductive systems. They say it also causes mottling of teeth. Some of the health concerns have been boosted by recent research that suggests increased rates of mottled teeth in fluoridated areas and a link between fluoridation and hip fractures caused by bone decay.

But supporters of fluoride cite many other studies that support its use. A large British study released this year analyzed thousands of studies of fluoride and determined it does not post a medical risk, and the U.S. medical community as a whole remains firmly in favor of fluoride.

There is no question that tiny amounts of fluoride are beneficial, said Dr. John Stamm, dean of the school of dentistry at the University of North Carolina at Chapel Hill and a spokesman for the American Dental Association. Fluoride works by reducing decay that occurs when minerals in tooth enamel are eroded by acids, he said, and it also helps teeth rebuild minerals after erosion.

But Connett, the New York professor, said fluoride supporters are ignoring the facts. "A lot of research has been done in the last 10 years and you'd think they'd be answering these findings and reviewing them very carefully," he said. "They're just completely ignoring them, continuing to maintain there is no debate. It's full speed ahead as far as they're concerned."

In Utah, fluoride foe Rae Howard says the personal freedom issue is just as important as the health concerns. "I don't feel it's appropriate to use the public water supply as a delivery system for a medication," said Howard, a health food store chain owner and president of an organization called Health Forum. "There will be people who will receive a medication without their consent. We wouldn't allow that under other circumstances. There are two places where you can force someone to take medication without their consent -- at a mental health institution and in prison."

Two large counties and several towns in Utah will face fluoridation votes next week. Howard has tried to get her message out through community forums, but fluoride supporters have refused to engage her in public. In both Salt Lake City and Spokane, Wash., medical experts declined to debate Connett. In Utah, he debated 24 empty chairs representing health experts who were invited to speak. He faced eight chairs in Spokane.

According to polls, voters appear to be closely divided on the wisdom of fluoridation in Las Vegas and Spokane. Both sides claim to have momentum in this election, but some acknowledge that things could go awry for their side. "My sense is if Vegas stops it (fluoride), that's a really remarkable indication of a shift in people's feelings about this," said Miller, the San Antonio history professor who is a strong supporter of fluoride.

Prominent anti-fluoride voices could sway some people too, especially since they're coming from both sides of the political spectrum. While newspapers generally support fluoride, the Salt Lake Tribune recently editorialized against it, quoting a study in a prominent dental journal that said fluoride in drinking water is not as important as some health experts think.

And during a visit to San Antonio, long a center of fluoride battles, Nader urged voters to reject fluoridation. According to published reports, he said fluoridation isn't appropriate if "its only objective" is to reduce tooth decay. In 1971, in fact, he wrote that there are more effective ways to fight cavities among children than exposing everyone to fluoridation. Nader isn't the only leftist to worry about the water supply. In 1999, voters in Santa Cruz, Calif. -- a town known for its liberalism -- narrowly rejected fluoride.

Miller is surprised by liberals and conservatives' meeting of the minds. "The left in the 1950s wouldn't be caught dead in the same bailiwick as the John Birch Society," he said. "I'm fascinated by the process in which the left in this case has really cozied up to the right and has embraced many of its arguments and endorsed its tactics. The language is very paranoid and distrustful."

But even if the war over drinking water unites ideological enemies, Miller said it's important to note that fluoride foes don't win most of their battles. "Over time, they've actually lost," he said. "Let's not lose sight of that fact."

Not so fast, say fluoride foes. Disgusted by what they see as media bias, they hope to harness the power of the Internet to spread the word about the dangers of tinkering with drinking water. Then, they hope, the time will be up for fluoride supporters. "This," Connett declared, "is their last gasp."

Randy Dotinga is a freelance medical and crime reporter living in San Diego.