"Off Keck Road" by Mona Simpson

Two women -- a single romantic and a have-not who takes what she can get -- love the same man in the latest from the author of "Anywhere but Here." 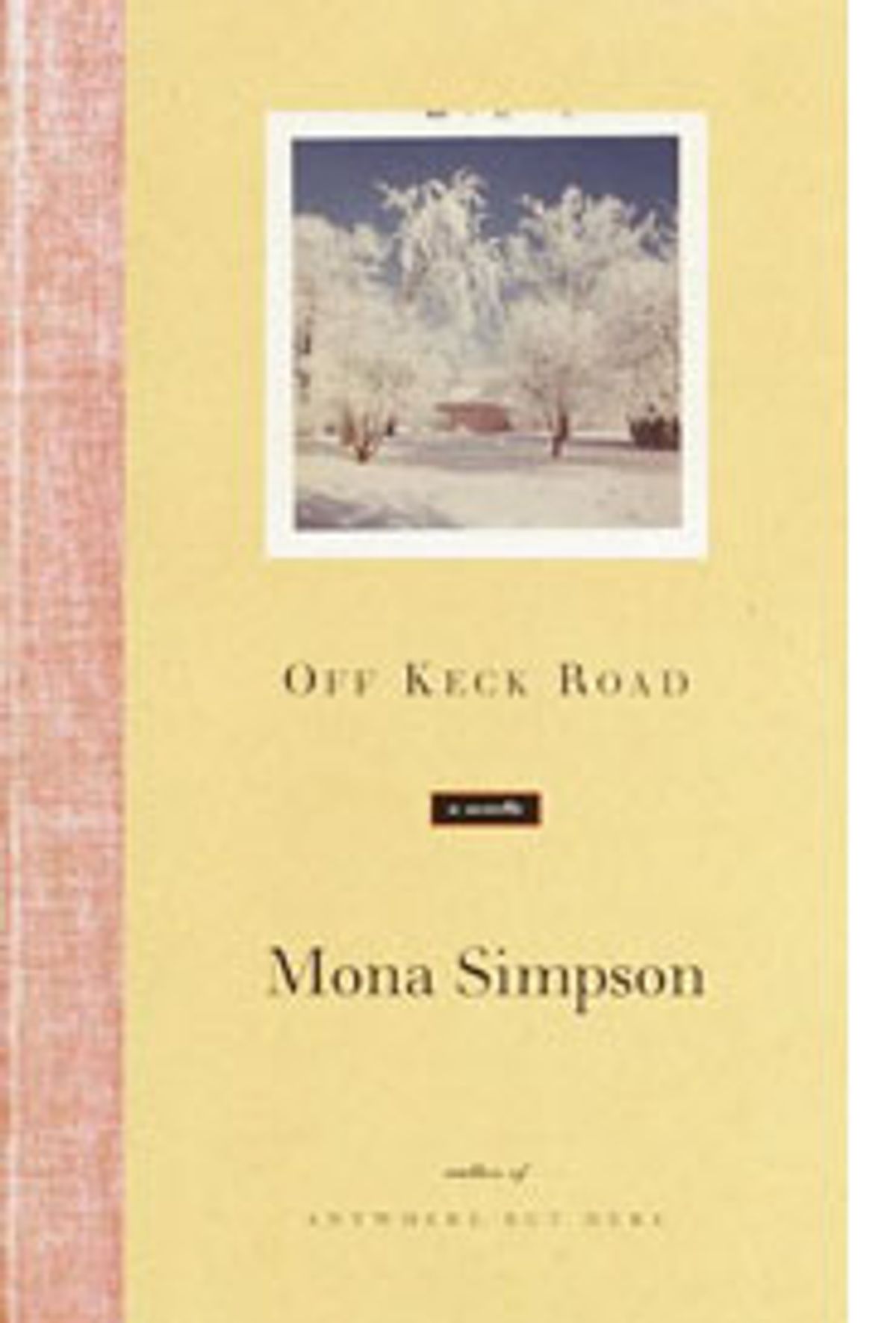 In this slim, haunting work of memory, Mona Simpson turns off the highways of her previous books and returns home to see what's become of those who stayed behind.

Set in Green Bay, Wis., where Simpson grew up, "Off Keck Road" moves between the last few decades, telling of characters who are emotionally and often physically paralyzed, frozen in place and standing apart, destined, in some cases, to miss out on even the most ordinary chances for happiness.

Bea Maxwell, daughter of the town's well-respected pediatrician, is like a Hillary who never met her bad boy Bill. While other girls dated, Bea kept busy pursuing good works, "oblivious to the whole underworld of flirtation, as if she were missing the receiving wires." Hazel, her mother, who had hoped to raise Bea "with the right amount of fear" about sex, begins to worry that she may have overdone it. "By now, Bea's mother was truly baffled. How was it that someone like Bea got left out? Could it be true that a life offered just so many chances, and that was it?"

Meanwhile, on the street that gives the book its title, June and Shelley, whose lives are interwoven with Bea's, grow up in the newer, poorer part of town. June, Bea's friend and confidante, marries and escapes her run-down road, only to return to town as a divorcée in sharkskin pants, saddled with a baby she must raise on her own. Shelley, born with a brown stain on her eyelid, lines up in 1961 with all the other kids in the town gym and dutifully swallows what turns out to be an oral vaccine gone awry, a dose of cherry-flavored polio in a paper cup. "It was as if a feather had brushed her with the sharp edges of each tiny thread, so fine were its marks and traces. Only one leg from the shin down, mostly the foot. And her mouth dragged a little, too, on the left."

If polio makes Shelley a prisoner of Keck Road, Hazel's crippling arthritis pulls Bea back into town, after just a few years spent on her own in Chicago. But Bea is also trapped by her own airy view of romance. She worships love unrealized -- the pass almost made, the affair never really begun: "Her mother had taught her that no was a magic word, generative: It created more and greater tries." Ultimately, Bea's idea of a good time is to nurse tender feelings for a handsome priest.

Shelley, on the other hand, takes what she can get, and what she can get is down-and-dirty sex with a neighbor on Keck Road. In the end, however, Shelley and Bea are both drawn, in very different ways, to an elderly jazz fanatic who dreams of Gene Krupa but settles for playing the drums in his local band, the Fox River Trotters.

As someone who married into a Green Bay family and has been shaking my head ever since, I can tell you that Simpson has nailed the place -- the Friday night fish fries, the old Starlight Supper Club, the way the blame for a husband's infidelity can be laid at the feet of a wife who let a rose garden wither. (Sadly, however, while Kroll's, the classic Green Bay diner/restaurant makes several appearances here, Simpson neglects to mention that in the ultimate act of gilding the lily, Kroll's fries its hamburgers in butter.) In "Off Keck Road," Simpson has written the great Green Bay novel. Granted, this is a literary category for which she has little competition, but when you consider that she barely mentions the Packers, it's no mean feat.

As it turns out, if Simpson didn't grow up in Green Bay, she would have had to invent it. The town does more than provide local color for the book -- it underlines the stasis afflicting its main characters. Over time, even provincial Green Bay changes, morphing from a small town into a small city. Its charming downtown gets swallowed up by a mall, and the social rules set by those who once lived in the mansions that line Mason Street no longer apply. Before long, despite a successful career, Bea becomes a classic spinster straight out of an Anita Brookner novel -- the old, odd woman out.

Nothing much happens in "Off Keck Road," so nothing interferes with the spell cast by Simpson's achingly precise prose. The book's emphasis on marriage as the acme of every woman's life may offend some and strike others as antiquated, but in Simpson's hands, Bea's single status symbolizes a more general failure to connect. Sometimes, as the heroine of "Off Keck Road" learns, no really does mean no.