Limp Bizkit rock the angry teenager within. Plus: If Fred Durst is such a music-biz whiz, why is he so f***in' pissed? 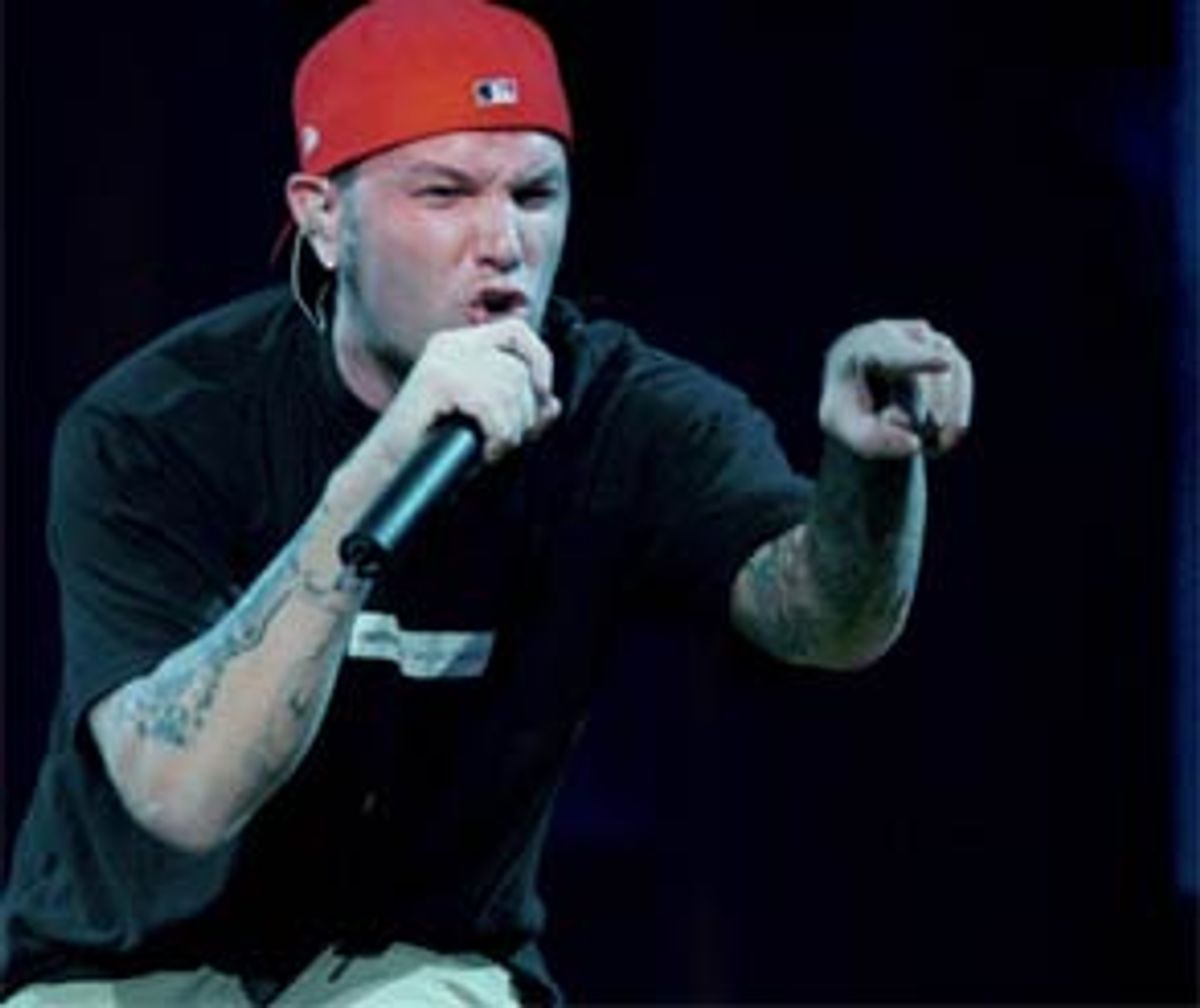 Sometimes it's hard to know whether Fred Durst really is the angriest dog in the world or just another high school loser getting the last laugh. His lyrics may be dumb, but the joker knows that commodified rage is the surest route to rock star success -- if not a spot on the permanent guest list at the Playboy Mansion. The frontman for Limp Bizkit has become one of pop's most public icons, instantly flagged by his backward, red Yankees baseball cap, his chinful of goat scruff and his ever-present arm candy (today Carmen Electra, tomorrow the world).

In the few short years since he gave up a career as a Jacksonville, Fla., tattoo artist to become a heavy-rock poster boy, Durst has accumulated quite a résumé: a cameo role in one of Gen X porn auteur Matt Zane's "Backstage Sluts" videos and an even more notorious role at Woodstock 99 (aka Rapestock), where the singer's command to "break stuff" anticipated a white riot the Clash's Joe Strummer could only fantasize about. ("Was I fanning them at Woodstock? Fuck, no. We were doing a Limp Bizkit show, same as we always do," Durst told Revolver magazine.) The singer also snagged a senior vice president post at his label, Interscope, became a Hollywood player and marked his mainstream breakthrough as the voice that launched a thousand lap dances with the whine and grind of Bizkit's 1999 hit "Nookie," which became the national anthem of strip clubs from coast to saline-enhanced coast.

Though Durst seems convinced that everyone hates him -- everyone but the fans, man, and the dudes at Napster -- he deserves some kind of due, if only for having the brains or moves to make the music industry work overtime to accommodate one more mediocre blowhard. And he has gotten it: Along with Eminem and Kid Rock, he's part of the wigga holy trinity, even though his straight-outta-the-sandbox raps make Slim Shady sound as eloquent as Shakespeare, and his streak of Puritan misogyny makes Rock's early-morning stoned pimpin' seem like a feminist conspiracy. Like his fellow Caucasian rappers, who each have made bank emulating hip-hop style, Durst belongs to a neo-cracker elite, contributing to a national trailer-park zeitgeist whose prime movers include Howard Stern, a bunch of those bone crushers in the World Wrestling Federation and Wisconsin truck driver Susan Hawk from "Survivor." There's probably no better time to proudly call yourself "a redneck fucker from Jacksonville."

That's exactly what Durst does on "Livin' It Up," one of the more, um, personal tracks on "Chocolate Starfish and the Hot Dog Flavored Water," Limp Bizkit's new album, which boasts a title so improbable it could be a parody of one of Prince's late-'80s conceits. Between samples from the Eagles' "Life in the Fast Lane," the singer outlines his style secrets: "Pay me no mind/I seen 'Fight Club' about 28 times/And I'm'a keep my pants saggin'/Keep a skateboard/A spray can for the taggin'/And I'm gonna keep a lot of girls on my bandwagon."

You go, Fred! Keep it real, son. Whether or not he has enjoyed the oral favors of Video Music Awards duet partner Christina Aguilera, as current "Anger Management" tour mate Eminem jokingly alleged in "The Real Slim Shady," Durst is still rock's man of the hour. "Chocolate Starfish," the No. 1 album in the country, sold 1.05 million copies in its first week of release, the highest of any rock band since the introduction of SoundScan. (The band toppled Pearl Jam's previous record of 950,000 for 1993's "Vs.") Yet, while Bizkit -- and, notably, hypersimian freakazoid guitarist Wes Borland, the group's instrumental wizard and true star -- crunch ferociously, even swing with pistoning, mosh-or-die rhythms, the album is a paltry excuse for music. Durst's big themes are paranoia, revenge and self-loathing, concepts that worked brilliantly for, say, Elvis Costello, but here are reduced to a dust-up in a junior high school boy's room.

As we stumble through the album's door, Durst is trying to dunk Interscope label mate Trent Reznor's head in the toilet: "You wanna fuck me like an animal/You'd like to burn me from the inside/You like to think that I'm the perfect drug/Just know that nothing you can do will bring you closer to me." That's from "Hot Dog," a little fit prompted by Reznor's unflattering inclusion of Durst's image in Nine Inch Nails' "Starfuckers, Inc." video. The song, Durst has noted, employs the word "fuck," or one of its variations, 46 times in three minutes and 15 seconds. Rad! (English poet laureate Philip Larkin was more blithely economical, and more startling, in 1974, when he anticipated the Durst credo in the opening line of his poem "This Be the Verse": "They fuck you up, your mum and dad.") Again and again on "Chocolate Starfish" (the phrase could be slang for "anus," though the line "The Chocolate Starfish is my man Fred Durst" suggests it's an alter ego), the singer reminds us that he doesn't give a fuck, and if you don't like it "you'll get knocked the fuck out" ("Full Nelson").

Durst sprays so much defensive testosterone all over the place that you begin to wonder if he's auditioning to be one of "Stiffed" author Susan Faludi's endangered male mystery dates. He protests too much, but if he didn't he wouldn't have anything to say at all -- which certainly puts him in touch with his suburban teen constituency. The funny thing is that the best tracks on "Starfish" really are the ones where Durst steps aside, sharing the mike with Scott Weiland (requisite alterna-ballad "Hold On") and rappers Xzibit ("Getcha Groove On") and DMX, Method Man and Redman (Swiss Beatz-produced "Rollin' [Urban Assault Vehicle]). Even actor Ben Stiller has a cameo, dropping by the studio in his patented "smug asshole" guise. The album-closing skit, as Stiller mocks Bizkit, is so dead-on it's gut busting. "Oooh, I can put a 'z' in my name, I'm bad," Stiller taunts, then, a moment later, deadpans: "Who could take rap, hip-hop, thrash punk metal, take it, throw it in a can, spin it around, and come out with something that wasn't fertilizer? It was the Bizkit, man." Gee, what ever happened to the Beastie Boys?

Stiller, of course, is meant to be a stand-in for the laughing chorus of grown-up squares who won't give it up and limp with the Bizkit. I certainly felt like one when I caught the band last year at the Philips Arena in Atlanta. The kids in the general admission area on the arena floor were at a full boil, moshing and crowd surfing, as teenage girls whipped off their tops and a cloud of marijuana smoke drifted through the house -- shades of "Gimme Shelter," or Woodstock 99. Only the anarchy was contained, the ATMs safe from harm under the watchful eyes of surveillance cameras. Durst's theater of frustration was about as rebellious as a night spent drunk on New Orleans' Bourbon Street puking in the gutter and waving a "Show Us Your Tits" placard. Even the cops were nonplused. Scurrying back to the office to file my review, I glimpsed a posse of Atlanta's finest, some of the very few African-American faces in the crowd. They were leaning against a rail, taking in the din. And laughing their butts off.

Steve Dollar is a freelance writer living in Brooklyn.