Pride before the fall

Ralph Nader told his supporters to cast a vote they could be proud of. How do you spell H-U-B-R-I-S? 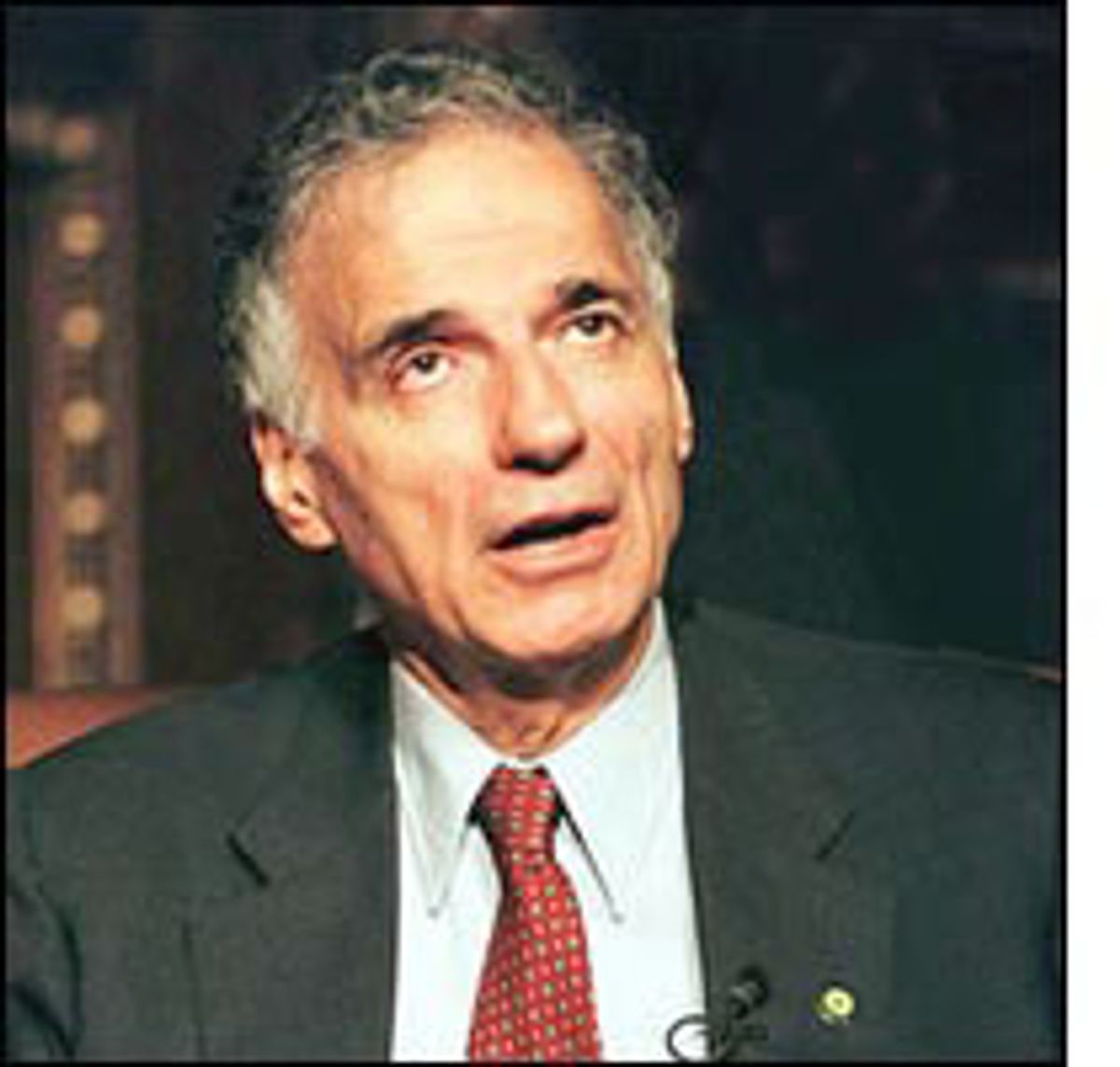 At this writing, there's a good chance that Ralph Nader's self-declared "conscience" vote in Florida will have lubricated young George Bush's way into the White House. The most fatuous president since Warren G. Harding, the most lackadaisically friendly to corporations since Reagan, the least primed for any governing activity besides rolling over for big oil, will come to power with a Green escort. Talk about making a difference. And if when the absentee ballots are counted in Florida, it turns out that Bush fails, it won't be for lack of the vehement Green shrug. CNN reported that about half of Nader supporters there would have voted for Gore if Nader wasn't on the ticket -- more than enough votes to put Gore over the top.

Of course, when the vote is so stomach-turningly, sleep-interruptingly close, many a factor, from the sublime to the ridiculous, could be decisive. But for an unhealthy gallbladder, Pat Buchanan might well have eaten away at Bush's lead in a number of states. Possibly the decision by a Democratic official in Palm Beach County to list the candidates in two distinct columns, staggered, with the punch-holes placed between them, so that some confused elderly voters punched Buchanan's hole when they thought they were punching Gore's, will end up costing Gore the election. President Clinton's zipper, Gore's sighs, even (as Nader suggests) Bush taking time off in the final days -- there's a long list. Let's not leave out the blowhard pundits or the foggy and ill-informed journalists. It takes a huge army of accident, error, slovenliness and bad thinking to produce a defeat.

In recent days, Nader himself opined that it didn't matter who won. Or didn't matter much. "Gore's a D-plus, Bush's a D-minus," Nader was still saying Wednesday morning. He wasn't the spoiler because Gore's votes weren't Gore's property. They weren't Gore's to lose. "Only Al Gore could defeat Al Gore," Nader says. Nevertheless, some Nader supporters, not least Barbara Ehrenreich on the New York Times op-ed page, tried to have their spoilage and eat it, claiming that Nader was mobilizing otherwise undeclared voters. Even as she wrote, several statewide polls showed the bulk of the anticipated Nader vote would otherwise have gone for Gore.

"Al Gore cost me the election," he said this morning at the National Press Club. Cute, the self-righteousness of a sect. The passion of every sect, as for every profit-obsessed corporation, is to mistake a means for an end. In the end, Nader claims to have established "the fastest-growing third party in America." "To keep the two parties in Washington more honest" is his stated goal -- but that is marginality speaking. The objective of politics should be to obtain political power for good causes.

He says the Greens are "the only party that connects on the ground with citizens fighting for justice," but this is to mistake social movements for political forces. This is to forget a truth that we have just seen demonstrated, that 90-some percent of America is to the right of the Greens. Democracy is not rule by activists, it is rule by the people. Even those who have doggedly, devotedly followed Nader for decades will have a hard time bonding with him now.

The risk of this result was always apparent, and Nader did nothing to suggest that he thought it negligible. At many points, he washed his hands of mere earthly results. Heaven was nigh. His campaign represented "the beginning of the end of the two-party duopoly." His hands would remain clean. Perhaps the risk was really an opportunity -- to build the Green Party!

Not long ago he declared, in effect, that even the worst Republicans weren't so bad at all, because they strengthened the opposition. "Heightening the contradictions" was the way this argument was put in the late 1960s, with reckless disregard of the people who would be hurt when those contradictions fell on their backs. "How can you spoil a system spoiled to the core?" Nader asks. Easily.

The young among Nader's supporters have been properly disgusted by normal politics and eager to see something new, fine and fierce come into the world. They will continue to search for the way to make that desire manifest, as they ought to. In one small step, during recent weeks, Seattle Greens and others bolted from the Democrats. Many went to the polls Tuesday not yet knowing what to do and found their minds concentrated. They will see, now, how effective is political action -- one way or other. But those old enough to remember Nixon in 1968 and five more years of the Vietnam War haven't the excuse of inexperience. Eyes fixed on the rearview mirror -- the New Deal, the movements of the '60s -- the more experienced of Nader's supporters counseled making a vote they could be proud of. But the pride they were speaking of preceded an earthly fall.

If indeed Bush is counted in, and a Republican White House does indeed join with a Republican Congress and Republican court system, it will be interesting to watch the rationalizations fly. But moral purists might consider that, if conscience is anything, it demands responsibility. It is fanaticism that washes its hands of results. Indeed, finger-pointing in every direction but home is the way of normal, stale politics. Rabbi Hillel, Dostoevski, Sartre, Gandhi (whom Naderites like to quote in other connections) have all known this central principle: When one chooses, one chooses the world. No alibis.

The claim of conscience without the work of conscientiousness is blindness.