Robert De Niro and Cuba Gooding Jr. remember a time when men were men, girls were cute and pencil-necked Poindexters stayed out of your damn face. 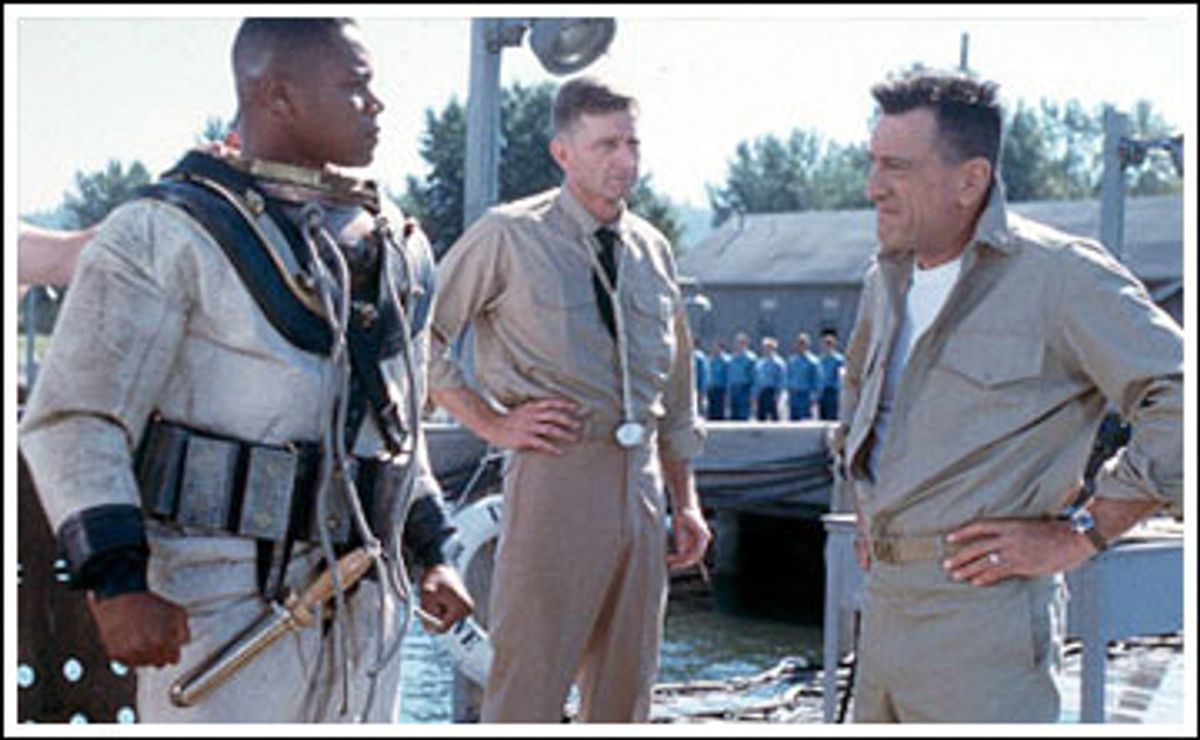 Interracial-buddy flicks have been around at least since "Brian's Song," the TV film about cancer-stricken halfback Brian Piccolo that made every boy in my fifth-grade class weep without shame. In latter-day Hollywood, these movies are back, and while they've gotten more sophisticated in some ways, they haven't necessarily gotten any better. "When the dying Piccolo (James Caan) was leaving his pal Gale Sayers (Billy Dee Williams) alone in the Bears' backfield, or Bill Cosby and Robert Culp were bagging bad guys on TV's "I Spy," we believed that manly friendships between manly men could overcome America's painful racial history.

These days, according to movies like "Remember the Titans" and now "Men of Honor," we believe, well, pretty much the same thing. Except we now see that it won't be easy, fellas, and that the manly men in question may hate each other, at least until they can find some four-eyed pansy-boy bureaucrat they hate more. In other words, many cans of whoop-ass will need opening between here and the land of racial harmony. Forget activism and the March on Washington and civil rights laws and the rest of that limp-wristed professor stuff. America will be healed by a little old-fashioned male pain and suffering, by linemen and Navy roughnecks and other guys who look like members of the Village People beating the living crap out of one another.

OK, I exaggerate, but only a little. "Men of Honor" means to be an inspirational tale, loosely based on the life story of Carl Brashear (Cuba Gooding Jr.), a Kentucky sharecropper's son who became both the first black master diver in the U.S. Navy and the first amputee to return to active duty in the armed forces. Gooding, who has been right on the cusp of major stardom since "Jerry Maguire," inhabits the role with his customary charisma and regal bearing, so Brashear seems like a fully realized character even through the witless clichés of Scott Marshall Smith's screenplay. Director George Tillman Jr. ("Soul Food") makes his big-budget debut by painting in splashy colors on a large canvas; this is richly appointed $8 entertainment with compelling period settings and exciting underwater action scenes.

But a military career, however remarkable, doesn't offer a whole lot in the way of drama. So Smith has invented a redneck nemesis for Brashear, a fictional diving instructor unfortunately named Billy Sunday (Robert De Niro) who tries to thwart him at every turn. Until, that is -- and of course this is predictable from the first instant we see Gooding and De Niro stare deeply into each other's eyes -- Brashear's exemplary performance eventually wins the aging cracker's grudging respect. Then the two adversaries, hardened by tough love and military discipline (or at least by the bizarre hazing rituals of diving school), unite to take on the Navy brass and its pantywaist insistence on rules and regulations.

As in "The Hurricane," Norman Jewison's problematic biopic of wrongfully convicted boxer Rubin Carter, one invented character whose racism seems both deeply personal and irrational stands in for an entire system of bigotry and discrimination. As Brashear learns in his first shipboard assignment, the only jobs open to blacks in the Navy when he enlisted in the late 1940s were as cooks or officers' valets. Tillman and Smith are evidently aware that the real obstacles to Brashear's career come from institutional racism, not one hateful individual, but their efforts to broaden the film's focus are pretty feeble. (The less said about Hal Holbrook's humiliating cameo as Sunday's eccentric superior, the better.)

Like so many movies about sports and the military, "Men of Honor" is seduced by the passionate intensity of its claustrophobic male universe into forgetting about the outside world. To the extent that it's about anything, it's about a sadomasochistic relationship between two guys; the fact that one of them is a black Navy pioneer is largely irrelevant social context. Early in the film, the title seems to be ironically intended: The Navy's "men of honor" are doing everything possible to destroy the career of a sterling serviceman. But by the end the masculine code of military life has itself been vindicated (the film was made with the Navy's eager cooperation), and Brashear's Christ-like suffering and ultimate transcendence have proved his worth to Sunday and all the Navy's other bigoted a-holes.

Stomping up and down the dock dishing out abuse, Douglas MacArthur-style corncob pipe clenched in his teeth, De Niro certainly attacks his role with all the demented intensity you'd expect. But he can't do anything about the fact that Sunday is a cartoon rather than a character, and the accent that meanders from south Georgia to south Jersey doesn't help. As in "Meet the Parents," De Niro remains an actor who can reveal things about a character while doing nothing. Sunday is far more effective sitting in an airport chair with his face kicked in, watching Brashear prepare for a crucial salvage dive on TV, than he is pouring out his soul to the younger man while trying to drown him in a rain barrel.

In the scene where that happens, which is simultaneously the film's most awkward and most revealing moment, Sunday explains that he doesn't hate blacks simply because he's an evil bastard. No, it's a result of economic competition between poor whites and poor blacks in the rural South: "Your daddy could farm cheaper than mine!" Sunday bellows tearfully to the man he hauled out of bed in his underwear to brutalize. OK, a character might think this, or even say it out loud to a friend (although I'm not convinced about that). But from the first encounter between Brashear and Sunday, their relationship is excessively intimate. "Men of Honor" is the all-male version of those movies in which the couple start out spitting fire at each other and end up as lovers.

Amid this testosterone soup, "Men of Honor" offers its women nothing to do except stand around in Jackie Kennedy or Pat Nixon outfits (depending on the era) and look worried. Charlize Theron gets star billing as Sunday's wife, but her role amounts to smudged lipstick, half a dozen smashing dresses and about the same number of lines. Aunjanue Ellis, a talented actress well known to New York theater audiences, does marginally better in the thankless role of Brashear's goody-two-shoes doctor wife.

At least the chicks aren't treated with the same contempt as the effete girly men who wear spectacles, sit behind desks and look things up in books, for God's sake. As Sunday's confession about his origins suggests, the "Men of Honor" prescription for national healing (by way of ball-busting abuse) has something to do with the great unspeakable issue in American life: class. But in the simplistic, symbolic world of Hollywood, class conflict all too frequently gets translated into a quasi-fascist clash between real men and geeks. In its quest to create "wholesome" entertainment, the movie industry is furiously turning back the clock four decades or so, to the days when men were men, girls were cute but knew their place and pencil-necked Poindexters stayed out of your damn face.