Confessions of a Florida poll worker

A deputy sheriff explains just how easy it would be to throw the election. 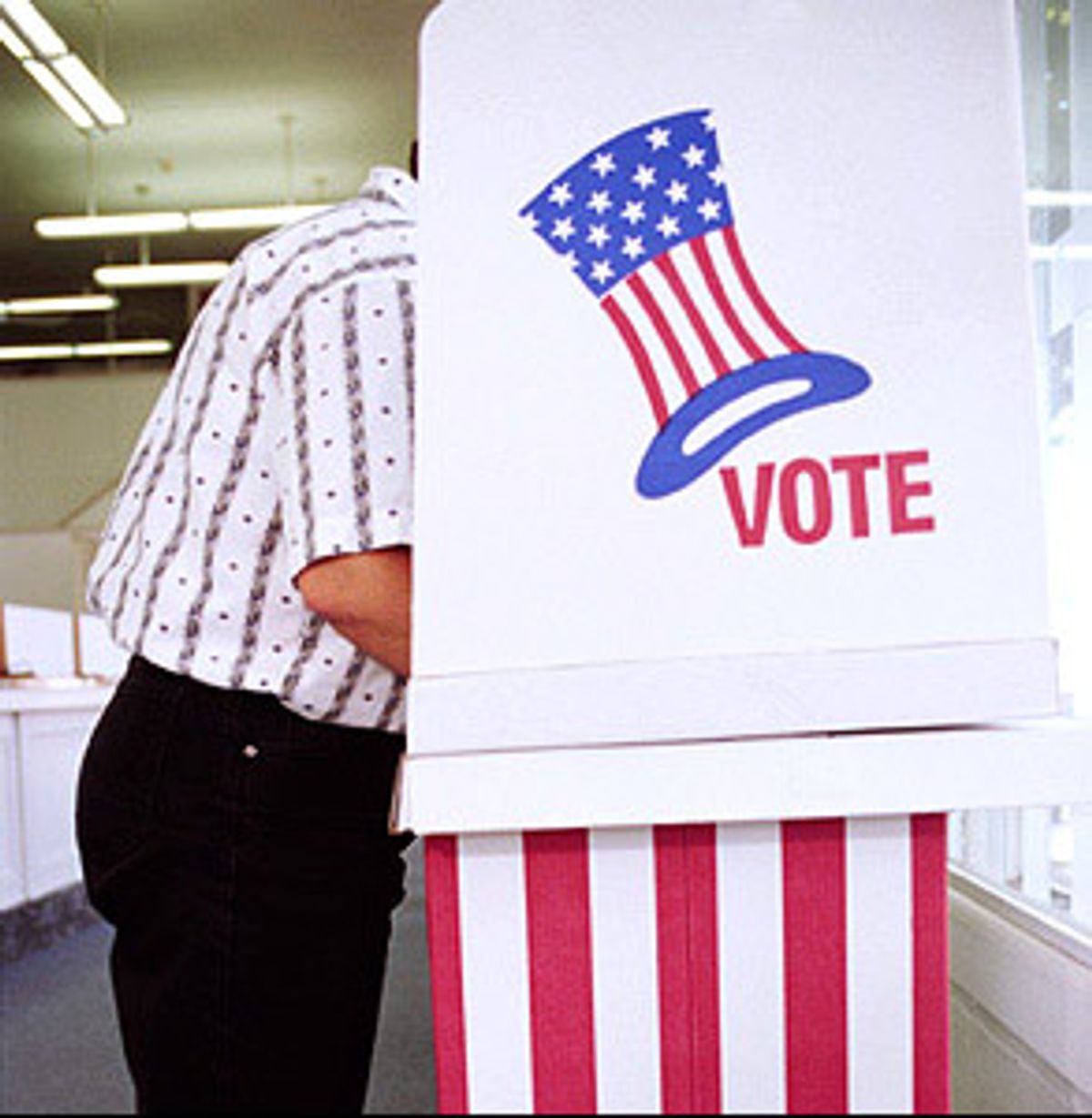 I couldn't believe no one was watching over us. I paused from separating the ballots, a Bush vote in my right hand and a "secrecy envelope" in my left, and looked around the church auditorium to make sure. My head was wobbly from 14 hours of work, with only a couple of 10-minute breaks. Yes, the inspectors were gone. It was 7:30 p.m., half an hour after the polls had closed, and the only one watching over us, besides each other, was the clerk, who was frantically occupied with straightening up a mess on a nearby table.

It would have been so easy to trash a couple of hundred Bush votes. I was already making two stacks of ballots, just to keep the piles neat. I was already glancing at each ballot to see who was doing better, and to find quirks, like the person who voted for both Bush and Gore, or for Gore and Nader, or for four presidential candidates, or the one who wrote in Bill Clinton for Congress.

I could have just made a pile each for Gore and Bush. I could then have put a stack of envelopes on top of the Bush pile and picked it up and stood up, as if I had a question for the clerk, then slipped out the kitchen door, about 10 feet away, and into my car and tossed them in the trunk. It was a pleasant fantasy, just a little less fleeting than the one I'd had earlier in the day in which I clobbered one of the clerks with a collapsible chair.

Of course I didn't clobber her -- Helen had had a hard enough day already, having almost been arrested for assaulting a young female voter. She'd grabbed the voter -- who already had a bandage around her knee -- by the shoulders and yanked her away from her husband, who was voting. Two people at a booth was one of the many no-nos we were looking out for. The couple left, then the man came back, yelling straight into the bald gap in the back of Helen's dyed-red hair: "You're going to jail! Jail!" He marched backwards down the path to the parking lot, continuing to yell at her.

Unable to resist, and thinking perhaps this fell under my bailiwick as deputy sheriff, I ran out to the parking lot and asked him what had happened, and his wife presented a bruise and scratch on her shoulder. "Nobody hurts my wife," he explained. "I'll talk to the inspector and see what I can do," I comforted. I gave the guy's card to an inspector and spent the rest of the day feeling guilty, after Helen took me under her wing and said, "You know why you're a good worker? You're alive!"

Helen would train me in two other poll worker positions: dropper of ballots in the box and demonstrator of how to vote. Both of these were highly illegal roles for a deputy sheriff, my fellow deputy sheriff Ed informed me gravely, one of about 15 times he notified me that I either had broken the law or been poised to. (His rebukes were not limited to my work; he critiqued my Spanish, too: "How can 'mesa' be masculine if it ends in an a? Come on and use your head!")

I wondered if any of the other four poll workers at my table were having ballot-trashing fantasies. With all the nervous repression throughout the day, it was inevitable. In 14 hours I had not heard one mention of Bush or Gore, since we weren't allowed to talk about the election. The names started to assume taboo-like power, and I was starting to wonder if they even existed at all.

"So, a four is for Bush and a six is for Gore, right?" I asked during a lull in the Spanish conversation my table was having. My favorite woman, and one of the few poll workers who didn't qualify as one of the strangest people I've met, looked around and lowered her voice, "Yes." Earlier, during one of the day's few quiet moments, I had asked Ed, "So, Ed, who's going to win?" The gold chains from his glasses began to wiggle. He looked at me as if I had beheaded the queen: "Brendan, you know the rules. Absolutely no talking about the election."

I knew the woman to my left was having no such fantasy. She was busy fantasizing about José Canseco. "I love José," she would say every few minutes. She detailed for me the status of her mental health. She can't work because she's disabled. Doctors say she's bipolar. She thinks it's just depression. Because she's in love with a baseball star. And José has called her, but only once. She sent him a bottle of champagne one time. And sent his wife a booklet on karate after the news reported he'd been beating her.

This woman was normal, compared with some of the other workers. These people weren't out to promote democracy; they were people who had nothing better to do, or who needed $82. The only qualification for being a poll worker is that you be a registered voter, and that you sit through a one-hour course, during which you're taught such nuggets as: "Never patronize people who use wheelchairs by patting them on the head."

Adding to the day's confusion was the question of who could accompany voters to the booths. Could 3-year-old children step inside with their parents? Ed was adamantly opposed. The clerks didn't mind. What about the blind? The senile? At around noon, Ed told me I'd been breaking the law all day by allowing caretakers into the booths with the disabled. "We can help them vote," he said. "All non-voters wait outside." Again, the clerks didn't care one way or the other.

So, the poll workers, rather than caretakers, began taking the disabled to the booths. Never mind that there were several near falls, most of them at the small step at the room's only ingress/egress, the step that a one-legged would-be voter cursed as she rolled away in her wheelchair. More opportunity for funny business, in theory -- all those blind Republicans I might have accompanied to the booths could have been tricked rather easily into tipping the balance for Gore.

Everything is different now. We didn't know, at the time, how incredibly close it would be, how otherworldly it would be that everything would hinge on those ballots we touched. I didn't know how crucial the 800 ballots would be that I carried over to the clerk and fake-tossed in the trash. I think back to faces of the 1,600 voters I greeted and bid farewell. The incredibly old man with a nose pinched like soft candy, hobbling on the arm of his son. The old woman whose first words to me were: "You want me to break your kneecap? Then get it out of my way." The model and her muscled boyfriend, illegally chatting between booths, whom I gladly informed were breaking the law. A man with a walker who tripped over his black leather shoe, which had fallen off, and whose foot felt to me either calcified or casted when I stuffed it back into the shoe. The guy who refused to acknowledge his blindness and didn't trust anyone to make his vote for Bush.

And the young Latino who couldn't stop smiling because it was his first time voting. The elderly man who referred to himself and his wife as "the walking wounded." The dirty white guy who looked like a bull rider but talked effeminately, with shorts and cowboy boots, who tried to vote for eight hours, navigating the red tape of changed addresses and affidavits and visiting different precincts to find where he was registered. We poll workers were so excited when he finally got to vote that we crowded around him afterward like he was giving a press conference, asking him how it felt to vote. He just hurried out the door.

Who knows -- maybe it was that guy's full-day, sweaty struggle to vote that doused my fantasy of making a dash for the door with a fistful of Bush ballots. Or the Latino guy's constant grin. Or the comment to me of an election observer: "Most problems I see are errors of omission rather than commission." Or the poster on the wall, which I had taped up, warning of a $5,000 fine for fraud. Or maybe I was just too tired. It was the kind of fatigue that, when someone brushed their big ass against your back and apologized, you only grunted in response. The kind of fatigue that causes you to forget your complicated schemes, however brilliant they may seem.