An artist who challenged Jesse Helms and George Bush's "decency clause" 10 years ago remembers what it was like to be called the "chocolate smeared young woman." 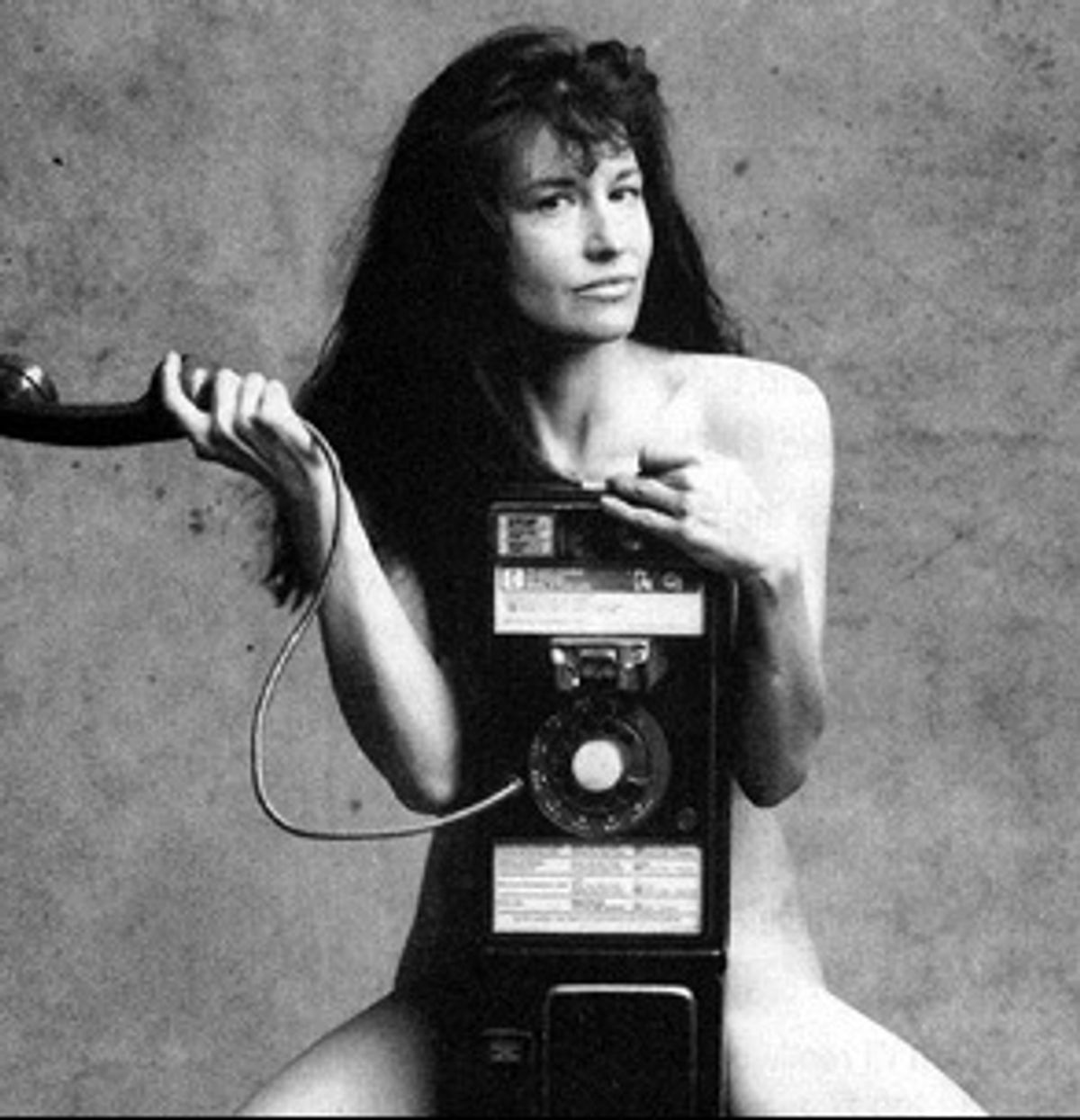 The television was black-and-white, but we knew the blood flowing out of the young man's head was scarlet. The policeman kept pounding the skull with skill and determination. The camera panned in for a close-up and my stomach shuddered in revulsion.

It was August, 1968. I was having a slumber party. At first my friends and I thought we were seeing a movie. But soon, we learned that it was the Chicago Democratic Convention. We stood mesmerized, forgetting Amy's bra in the freezer. Nineteen-sixty-eight was the year of assassinations, the Civil Rights movement, and the Vietnam War. We had already become used to society's rage. But this was worse somehow, maybe because it was so close to home.

Seeing the demonstrators beaten was my entrance into the counterculture's rage and the unrest of the entire nation. My personal anger, hostility, and anxiety had found a context in which it felt at home.

The Chicago Democratic Convention produced the Chicago 7. I went to Evanston City Hall when I was still in junior high, to see the defendants and their attorney, William Kunstler, speak. Kunstler later formed the Center for Constitutional Rights, which would handle the NEA 4 trial, in which I was a plaintiff. The lead attorney for the NEA case was David Cole, Kunstler's protégé. David Cole was from Evanston. When I found this out, it seemed like an odd coincidence.

I applied for a solo artist's grant from the National Endowment for the Arts for 1990. While the application was pending, I performed "We Keep Our Victims Ready" at the Walker Art Center in Minneapolis. I received a positive evaluation from the NEA panel member who came to see my show.

The process for receiving an NEA grant is a lengthy one. You submit a curriculum vitae, an artist's statement, and examples of work. If you have applied for a theater grant (as I had), a local theater professional comes to see you perform. You then meet with a local peer panel for an interview. The peer panel sends a recommendation, either for approval or denial of the grant, to the 26-member National Council on the Arts in Washington, D.C.

My peer panel review went well that year. I was recommended for approval.

But sometime in early May, 1990, someone went into my application files and leaked information about "We Keep Our Victims Ready" to the widely syndicated conservative columnists Rowland Evans and Robert Novak. I was about to become the latest casualty of the so-called culture wars.

That year, the National Council was to convene to review peer panel recommendations on the weekend of May 12-13. On May 11, Evans and Novak's column, entitled "New 'Art' Storm Brewing," appeared in the Washington Post, the New York Post, and other major dailies across America.

In the column, Evans and Novak wrote that the chairman of the NEA, John Frohnmeyer, had been advised by unnamed "friends" to veto a number of solo-artist grant applications up for review. Among the applications was that of a "chocolate smeared young women" -- me. A Frohnmeyer veto would "ease President Bush's deepening troubles with conservatives on his suspect cultural agenda," wrote Evans and Novak. Approval of the grants, on the other hand, would make it difficult for Bush to "defuse the hottest cultural-and-taxpayer issue out in the land beyond the Beltway."

This thinly veiled threat did the trick. The Council neither rejected nor approved the 18 contested theater applications that weekend. It decided to postpone its decision until after "more information" about the artists and their work could be obtained.

I was outraged by the Evans and Novak piece, and I wrote a response, which was published on May 19 in the Washington Post. I pointed out that Evans and Novak's portrayal of me as the "chocolate smeared young woman" was grossly reductive, and created the erroneous impression that my work was sexual in nature. I tried to present a more balanced picture of my career, and I said that I felt Evans and Novak's attack was "part of a larger trend of suppressing artists -- especially those whose work deals with difficult social issues -- by playing on society's fears, prejudices, and problems."

On June 20, 1990, the "additional information" on the 18 contested grants was sent to the members of the Council. A week later, at a meeting of an artists' organization in Seattle, John Frohnmeyer said that "political realities" would probably mean that some grants would be vetoed.

One of the "political realities" Frohnmeyer was referring to may have been a short letter addressed to him, from George Bush, dated June 19. "I do not want to see censorship," Bush wrote, "yet I don't believe a dime of taxpayer's [sic] money should go into art that is clearly and visibly filth ... The taxpayer will not subsidize filth and patently blasphemous material. You are doing a good job and I support you. Keep it up!"

Frohnmeyer -- a mild-mannered, environmentally conscious, L.L. Bean-wearing Republican from Oregon -- didn't have the stomach for this kind of thing. He conducted a cursory telephone poll of the Council members, and, on June 29, he announced that four of the 18 grants had been vetoed. Mine was one of them. The others belonged to performance artists Holly Hughes, John Fleck, and Tim Miller. Needless to say, we were all devastated when we heard the news.

A coalition of artists, advocates, and attorneys decided that we four artists should band together and sue for reinstatement of the grants. Attorney Mary Dorman and arts advocate Joy Silverman, of the National Campaign for Freedom of Expression, and David Cole from the Center for Constitutional Rights (William Kunstler's organization), came on board to represent us. Melane Verveer of People for the American Way steered the direction of the lawsuit. And of course, the ACLU joined in.

Meanwhile, the media was having a field day and the art community was in a frenzy. There were speeches, demonstrations, editorials, political meetings, debriefings, television shows, memos, inquiries. Jesse Helms brought my work up on the Senate floor as an example of why the NEA shouldn't be funded.

While all this was going on, I secluded myself in Nyack, New York, where Michael and I (married by this time) lived above a jewelry store. I was thankful for the smallness of the quaint town. Michael stood by me, being more than supportive. But there was only so much he could do. I was bitter at the thought that I had become the victim after all -- from portraying one in my work to really becoming one. And I was afraid of the impact the NEA case would have on my career. I wanted to be known for my art, not as the anti-censorship queen.

But I never considered not going ahead with the lawsuit. I felt a responsibility towards the importance of the case and seeing it through. I was aware that many people didn't think that withholding subsidies for artists was really censorship, and that they thought that I and my fellow artists were coddled, spoiled. I felt I had to demonstrate how wrong that was.

So, when the team of attorneys filed suit in the 9th Circuit in Los Angeles, I was one of the plaintiffs. The NEA 4 had been officially born. (The case became known as Finley et al. vs. the NEA because my name happened to be the first, alphabetically, of the four.)

By now, the artists whose grants had been approved were receiving their official notifications of acceptance, along with the forms that required them to sign "the Helms Clause" -- the clause that stipulated that the artist could not create work with "homoerotic, sadomasochistic," or other "obscene" content. Most artists signed the clause. Some artists pointed out that the Helms Clause was eerily reminiscent of Nazi rhetoric and refused to sign.

Meanwhile, the Independent Commission had reported back to Congress. Acting on the commission's recommendations, Congress adopted the Williams/Coleman Amendment (better known as the "decency clause"), which directs the Chairperson of the NEA to "take into consideration general standards of decency and respect for the diverse beliefs and values of the American public." At that point, the NEA 4 were joined by a new plaintiff, the National Association of Artists Organizations (NAAO). Our lawyers amended our complaint so that, in addition to suing for reinstatement of our grants, we were now challenging the constitutionality of the decency clause.

I was the only straight artist in the NEA 4 and I was portrayed in the press as the nice married girl who lives in a small town and does art. It was as if they felt it was necessary to use my nonthreatening personal life to say, "See? Some artists are decent." People from arts lobbying groups used to ask me if I would like to meet Jesse Helms for tea, to show him what a nice wholesome young woman I was. I said no. I didn't think my personality or sexual preference should have anything to do with whether or not I was protected by the First Amendment.

Karen Finley is a writer and artist and author of "A Different Kind of Intimacy."