A recipe with a history, to be eaten shamelessly. 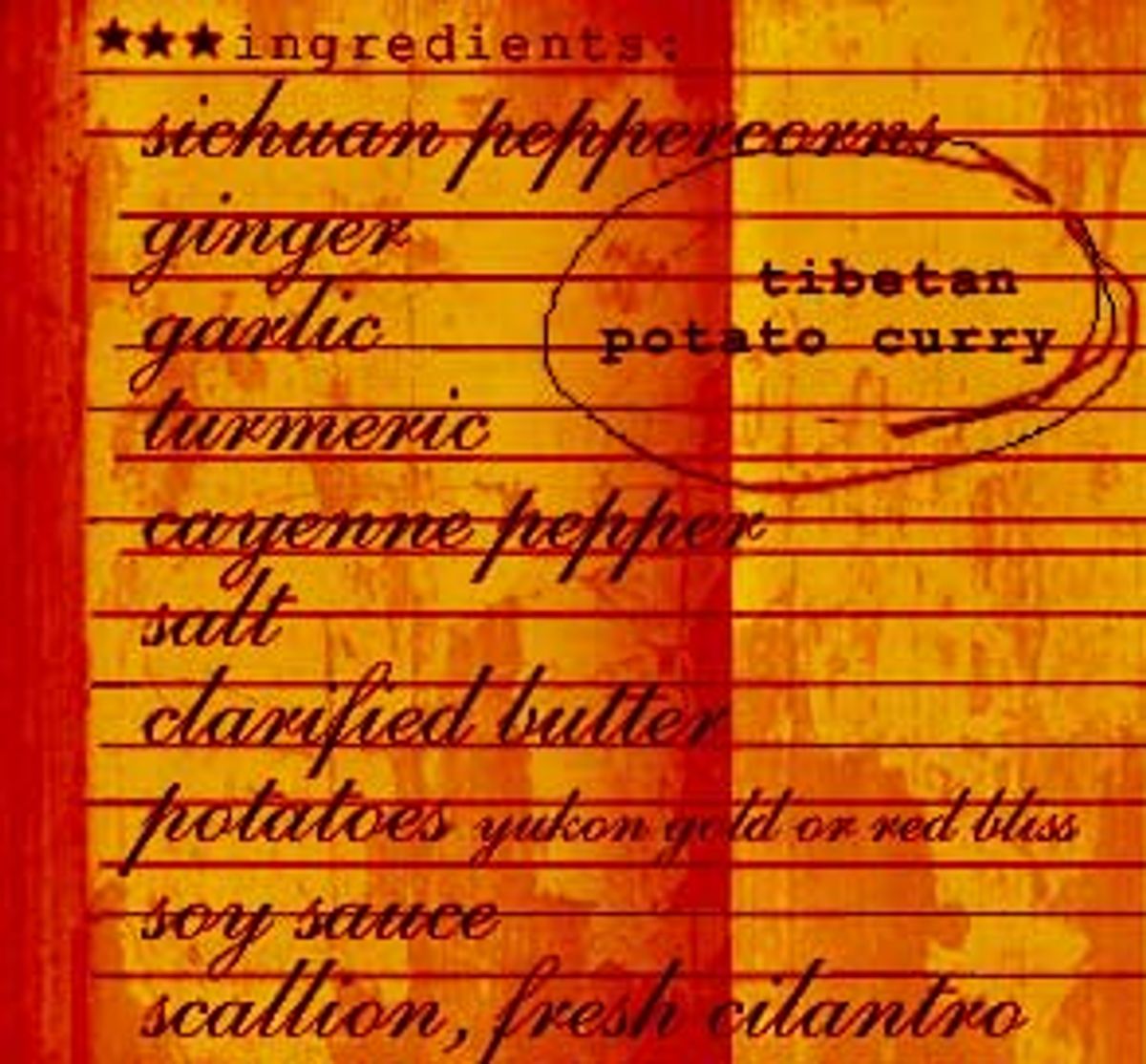 In preparing the dish, the single most important thing to remember is that the potatoes have to be mouth-meltingly soft. You'll know they're approaching that stage when neighbors start pounding on the door, drawn by the intoxicating smells that have seeped out of your kitchen. Lock the door, if you haven't already, and stir in the garnish.

3 or 4 cloves of garlic, peeled and finely minced

1 teaspoon cayenne (or other fiery pepper)

6 medium Yukon Gold or Red Bliss potatoes, peeled and parboiled for 15 minutes, then cut into cubes

1 scallion, including the green part, trimmed and minced

Heat the Sichuan peppercorns in a small, ungreased skillet over medium heat until they begin to darken and release their aroma. Turn them into a small mortar or onto a chopping board and pulverize to a coarse powder.

Mix the pepper powder, ginger, garlic, turmeric, cayenne and salt together to form a paste. Heat the clarified butter in a large skillet and blend in the paste. Cook, stirring with a spatula or wooden spoon, for a few minutes, to let the butter become fully seasoned. Meanwhile, toss the potato cubes in the soy sauce until it has all been absorbed.

Add the seasoned potatoes to the skillet and turn up the heat to medium high. Cook until the potatoes have a crunchy brown coating on the outside and a meltingly soft interior. Use a spatula to turn them constantly so that they brown on all sides. This will take about 10 to 15 minutes over medium-high heat.

When the potatoes are as described, toss in the minced scallion and cilantro. Continue cooking for one more minute to allow the garnish to wilt and cling to the potatoes. Turn everything into a serving bowl. Then, as the Tibetans say, "Ngotsa manang ni choe" -- "Eat shamelessly."

Cook's note: Clarified butter (ghee) is easily made by putting the half-stick of butter in a heatproof measuring cup and setting this on the rack in a preheated warm oven. When the butter has melted and the solids have separated out, remove the measuring cup from the oven (with a potholder -- it will be hot!) and carefully pour off the clear liquid into the skillet, letting none of the solids escape. (Discard these or, as I do, eat them mopped up with a little piece of bread.) This pure butterfat can then be used for frying, and it will not darken the way whole butter does.

John Thorne is the author, with his wife, Matt Lewis Thorne, of several books, including the "The Outlaw Cook" and "Pot on the Fire: Further Exploits of a Renegade Cook."