How fat can you get? 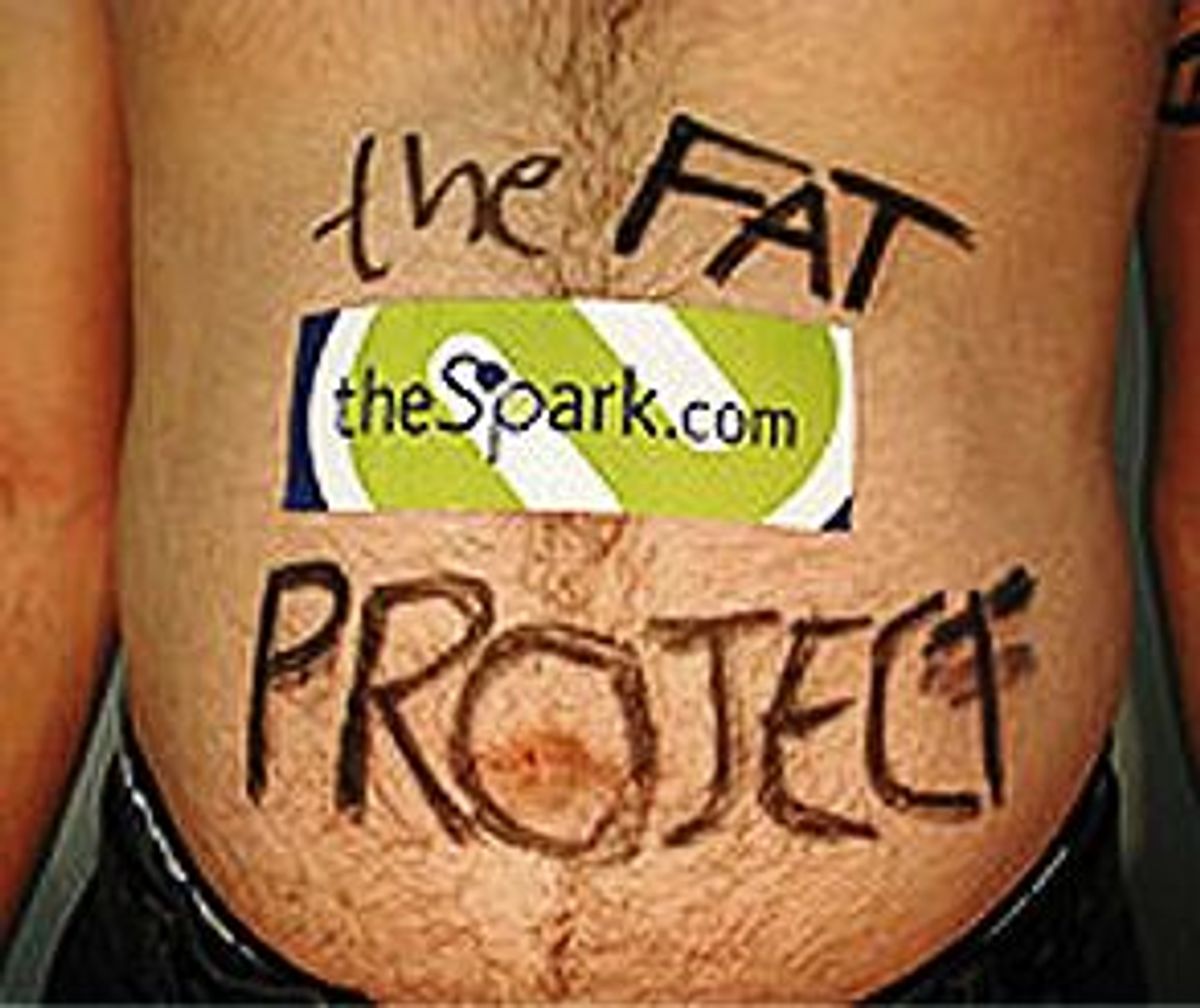 Every now and then, an event -- the Subway Series, the presidential election -- makes me feel like part of a larger community. Add one more to the list: the Fat Project.

Some observers would think it absurd that when we have so little free time to read novels, attend concerts or learn foreign languages, many of us know just how long it takes on the StairMaster to burn off a Taco Bell Gordita. After years of calorie-counting, obsessive exercise and comparing ourselves to images we see in the media, most of us have accrued an almost encyclopedic know-how about dieting and getting in shape. Here, finally, was an opportunity for two contestants to apply all that expertise to an opposite goal: getting fat.

The Fat Project challenged them to gain 30 pounds in 30 days for $3,000. Site visitors could read project updates, consider "scientific" weight-gain charts, check out progressive photos of the contestants and chat on lively message boards. Conceived by TheSpark science editor Christian Rudder (whose previous investigations include the Stinky Feet Project), the Fat Project's Web-ready metamorphosis drew more than a million visitors to The Spark's site over the course of the Project's one-month run.

Who, you may be wondering, would agree to put themselves under that kind of spotlight? Quite a few, apparently. No less than 300 people -- half male, half female -- applied to do what dieters across the country struggle to avoid. According to Rudder, about a third of the male applicants were 120-pound, 6-foot-2 teenage boys -- hormonally charged eating machines looking to bulk up. TheSpark staff said no thanks. Overweight men were similarly turned down on the grounds that it would have been hard to track their progress.

After a careful selection process, TheSpark chose Nicole and Eric.

She: a lithe, pretty, 20-year-old former homecoming queen from Alabama. Short on college tuition funds, Nicole figured it was nachos or the Navy (she already had a buzz cut when the project began). Besides, she was curious to learn how being fat might affect her social life.

He: a cutie from Cincinnati, eating to win the prize money to buy a diamond ring for his beloved. Eric, a film school dropout currently employed as a security guard, had the advantage of experience (former pie-eating contest winner) and a familial predisposition for endurance -- an uncle with the distinction of having set the Guinness world record for playing the longest game of Uno.

On Saturday, Sept. 30, Nicole and Eric flew in to Boston and were escorted to their TheSpark-provided apartment. Under Christian's instruction, both had fasted for a few days before the event, so they arrived hungry.

The contestants began by feasting on chocolate doughnuts, four pizzas, chicken fried rice, sesame chicken and eight egg rolls. Nicole and Eric then added an easy 2,200 calories each with a serving of Weight Gain 2200 Gold. Recalls Christian, "The eating was truly fearsome."

Almost immediately, message boards on the site came alive. Readers advised the contestants on what and when to eat. They engaged in savvy, spirited debates over the relative merits of red meat-gorging versus carbo-loading. Beer, Spam, peanut butter, Twinkies, cheese and bagels were among some of the most popular recommendations. Avocados remained controversial.

Every day, Nicole and Eric spent time socializing on the boards. (Eric told me he still keeps in touch with some of his loyal supporters.) Some fans asked if they could send food for Nicole and Eric to eat, so Christian provided an address for donations. A delivery of ice cream and whipped cream arrived almost immediately.

But Web fame has its flip side, and both contestants received a fair amount of nasty message posting -- targeting Nicole in particular. Some visitors claimed to be disgusted at how "fat" Nicole had become: "Let's face it ... Nicole looks bad enough now ... she should stop." But most of the postings read like the inarticulate jabbering of teenage boys: "Call 911 -- Nicole needs an emergency breast implant -- 3 cup sizes ought to weight [sic] enough?"

No one was terribly surprised. According to Christian, who had warned Eric and Nicole to expect unfriendly attention, the Internet is full of perverted guys who are "lewd and mean -- and generally very uncool." After participating in this project, Eric remains convinced that people are generally much more accepting of weight gain in men than women: "I could have put on 100 pounds and no one would have noticed, 'cause I'm a guy."

On the final day of the Fat Project, Nicole and Eric weighed in. Employing an emergency weight-gain strategy of salt and gallons of water, Eric achieved his goal of 204 pounds. Similar last-minute strategies didn't work for Nicole, who ended her month-long binge four pounds short of her goal weight at 147.5 pounds.

But the judges took pity on her, and gave her the prize money anyway, so both contestants went home lighthearted, confident they had, um, grown a lot from the experience.

Says Nicole, "The last thing I'm going to do is diet. I seriously doubt that I will have a desire for fattening foods any time in the near future. I'll just be eating healthier and exercising a little. That's about it!"

As of Nov. 7, Eric had already dropped to his normal weight of 185 pounds. He plans to move back to Dayton, Ohio, to start a small production company to distribute films on the Internet. Christian will continue to post sporadic updates to let us know what Eric and Nicole are doing and eating.

Ask Christian Rudder what the Fat Project is about, and he'll tell you it's an "adventure in personal physiology." And it's hard to argue with that. But the project's success also depended on its ingenious subversion: It pokes fun at our efforts to lose weight through an earnest attempt to gain weight. And reminds us that while most of us spend way too much time trying to look like the kids on the WB, Spam, mayonnaise sandwiches and the gross realness of our bodies inevitably prove to be far, far more entertaining.