It's the next copyright battleground -- fan filmmakers are hacking their favorite movies. 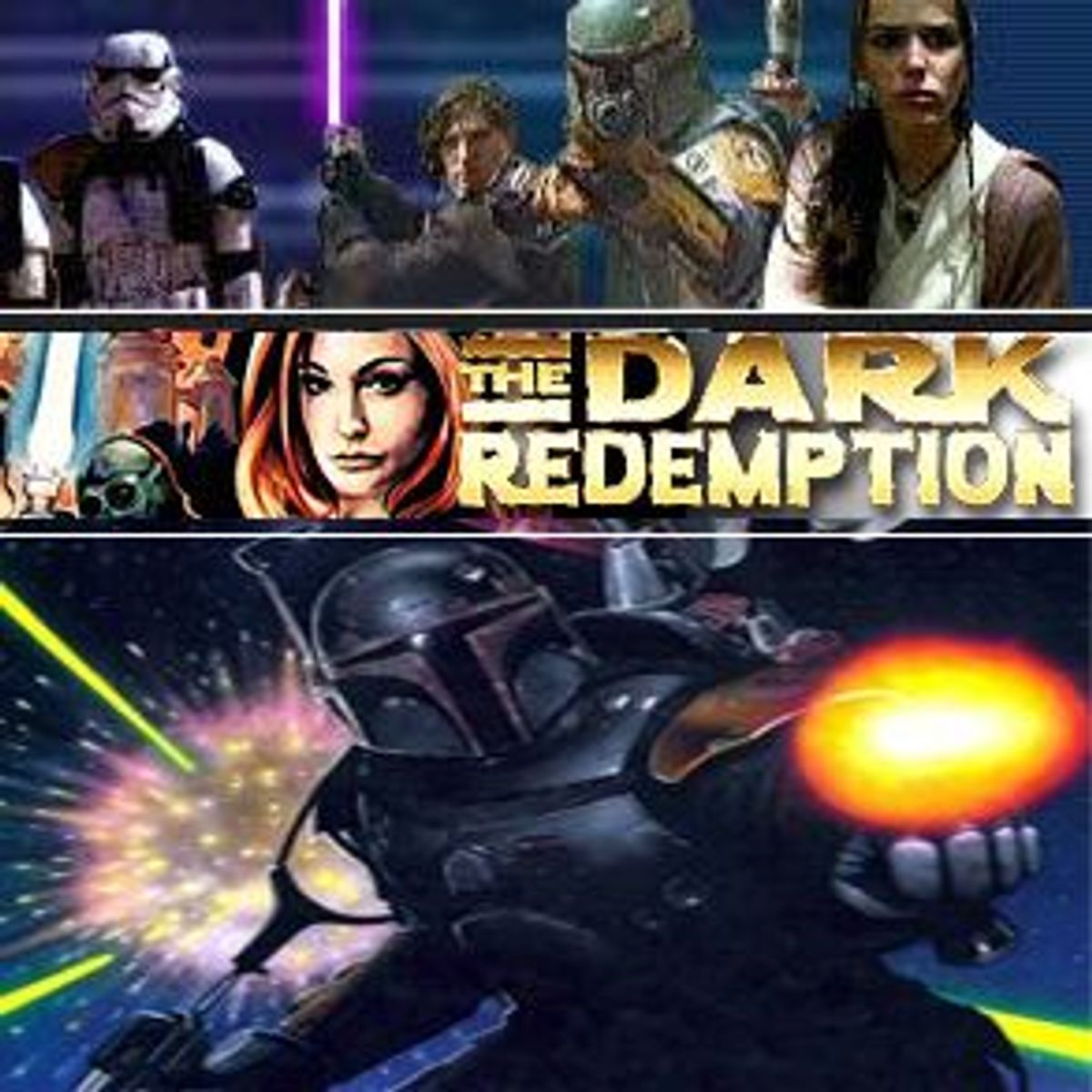 Have you seen "The Dark Redemption," the "Star Wars" prequel film set days before the events of the original "Star Wars"? What about "Bounty Trail," which features the further adventures of "Star Wars" intergalactic bounty hunter Boba Fett? Or how about that episode of "The X-Files" in which Mulder and Scully investigate the death of Elvis Presley? If "Star Trek: Voyager" isn't doing it for you, then take a look at the other Trek series, "Hidden Frontier."

If the above sound like fanciful ideas dreamed up by fans, that's because they are. And the odd thing is, they also actually exist for you to watch and enjoy.

These are products of the "fan film" scene -- an offshoot culture of independent digital filmmaking. Fan films feature the characters, settings or premise of popular genre properties in stories that audiences will probably never get to see on the movie screen or television. Most fan filmmakers go through the same hard work involved in making a typical independent short film -- scriptwriting, casting, on-set production and post-production. The difference is that they work with a property that belongs to somebody else, in most cases without the consent of the original creator or copyright holder.

"I think with many of these properties the creators have crafted such fully realized universes that someone can come in and create their own story alongside the 'big boys,'" says Justin Young, a 21-year-old college student and fan filmmaker who has produced his own films based on the "Highlander" movie and TV series.

But creating your own sequel or prequel to these "fully realized universes" has only recently become feasible for the average fan. Once upon a time, fans had to be content with penning a fan-fiction story (or writing the script for a "virtual season" for a TV show, for instance); these days, they can create and distribute actual films that, in their special effects at least, are not so far behind what's being releasing in theaters. Armed with inexpensive digital camcorders and broadband Net connections, fans now have the means to create and distribute their own audiovisual productions.

For a small group of devotees, fandom is becoming a matter of participation rather than just spectacle. In the process, fan filmmakers may be helping to change the way we experience the movies.

What's striking about "Troops" is the effects. Here's a film, produced on a home PC, that does a not-half-bad job of mimicking the kinds of million-dollar bells and whistles George Lucas brought to the screen in "Star Wars." The technological success of "Troops" inspired fans to broaden their approach: Why make only parodies when you can do "serious" short films set in the "Star Wars" universe?

Several "Star Wars" fan films are available online or in production. "For some reason we thought we were the only doofuses with this idea, that we'd be alone in kick-starting this new minigenre," says Devon Read, a 20-year-old graphic designer who's finishing up production on his "Star Wars" fan film.

While "Star Wars" remains the most popular subject by far, the world of fan films has grown to include unofficial films based on other properties like "Star Trek," "The X-Files," "Highlander," "Batman," "Spiderman," "The X-Men" and more.

One obvious question from all of this: Why bother making a film based on somebody else's property, rather than something of your own creation?

"Hey, it's 'Star Wars'!" explains Jeff Vitkuske, a high school student from Ontario, Canada, who is busy producing fan films based on "Star Wars" and "The X-Men." "It's great to make up something yourself," he says, "but let me tell you -- there's nothing like watching yourself wielding a light saber!"

In fact, there's nothing new about fans co-opting their favorite media sensations. According to Henry Jenkins, director of comparative media studies at MIT, humans have always reinterpreted the stories they hear. "Throughout most of human history, people operated according to a folk culture model -- that is, they saw themselves as entitled to add to or retell the core myths and stories of their culture."

Jenkins points out that more than 200 appropriations of "Alice's Adventures in Wonderland" were published in the 20 years after the novel first appeared and many of them circulated commercially.

If anything, what's recent is the inflexibility of media corporations in responding to fans' creations. "Contemporary mass culture assumes that the average citizen consumes but does not participate," says Jenkins, "whereas fandom holds onto the ideal of a culture where everyone is free and able to participate."

Not that many fan filmmakers would turn down an offer to join the big studios. Both "Troops" and "Bounty Trail" helped their creators move on to work in the film industry. "Bounty Trail" caught the attention of Lucas, who subsequently hired the fan-film director to work on the production of the second "Star Wars" prequel.

While technology enables fan filmmakers to achieve near Hollywood effects, it has not delivered the key to good filmmaking. The acting and screenwriting in most fan films are not exactly of Oscar-winning quality, and other production values tend to betray the films' amateur origins. In the "Star Trek" knockoff "Hidden Frontier," you can't help speculating on the little things -- like if those among the cast who actually look good in their Starfleet uniforms are the aspiring actors, while those who do not are the regulars at "Trek" conventions.

"My opinion on fan films (and I've only really seen the 'Star Wars' ones) is that on the whole they're mediocre," says Scott Middlebrook, who has reviewed more than 60 fan-made films for Force Flicks, a "Star Wars" multimedia fan site. "A lot of the more popular films are fairly average -- nothing more than light saber duels with little or no story. Parodies seem to come up better than the serious films. I guess if the film's not taking itself too seriously, it's easier for the audience to do the same. Plus, 'Star Wars' fans can get a tad anal and nit-picking (myself included) about the more serious stuff."

But, again, the effects aren't half-bad. That's partly due to the immense amount of sharing on the Internet among fan filmmakers when it comes to special effects and other production techniques. Many designers who have made their own 3-D models of "Star Wars" vehicles and droids are willing to share their work for credit on a fan film.

A plethora of tutorials -- essentially constituting a "'Star Wars' Filmmaking for Dummies" -- show filmmakers everything from how to create light saber and laser blast effects to making authentic-looking costumes and props. Says Justin Young: "We will always be a step or two behind ILM [Lucas' Industrial Light and Magic], but I think how close we have come would shock most people."

As for the legal issues, fan films appear to fall within a gray area between fan fiction and parody, both of which are legally protected under U.S. law. Within the fan-film scene, de facto rules keep most fan filmmakers from selling their work.

Still, at least one fan film has landed its producer in trouble with the law.

Marc Kimball, a 40-year-old animator for a video production company, took an old 8 mm movie that he had shot in 1980 of himself starring as Superman, updated the film's effects with modern computer graphics and distributed the revised film for free on the Internet.

Lawyers representing DC Comics, the company that owns Superman, sent Kimball a cease-and-desist letter a week later. It stated that Kimball's work was unauthorized and accused Kimball of using a DC Comics property without the express written permission of DC Comics. Kimball promptly took down the site he had set up for distributing his film, without contesting the company's claims.

"I thought I had done everything right. The movie had original music and legal music-library stuff, an original story, original special effects," says Kimball. Furthermore, there were no ad banners on his Web site, and he did not sell or make videotape copies of his film. He insists, "I treated Superman with respect. The only thing was I used the Superman logo, name and costume, and they shut me down."

(When asked for its official stance on fan films based on its properties and for comment on the Kimball matter, DC Comics' publicity manager responded to Salon: "DC Comics has a long history of energetically protecting its copyrights and trademarks. Therefore, we stand by our cease-and-desist letter in this particular case.")

While DC Comics takes the hard line, other media giants may be opting for a more enlightened approach -- drawing their fans into the fold.

Lucasfilm, the production company behind the "Star Wars" series, has an informal agreement with "Star Wars" fans: "We love our fans, and we love it when they express their creativity and enthusiasm for 'Star Wars,'" emphasizes Lynne Hale, Lucas' publicist. "When it does cross the line, or when we do have a problem, is when they use 'Star Wars' copyrighted materials for commercial use." Otherwise, "Star Wars" fan filmmakers have the blessing of Lucas himself.

On Nov. 6, the official Web site for the "Star Wars" movies and AtomFilms announced that they will partner to launch the Star Wars Fan Film Network later this year, which will feature fan-made movies. Lucasfilm is going so far as to make sound effects -- from Darth Vader's breathing to the equally recognizable light saber hum -- available from its library for fan filmmakers to use. The Star Wars Fan Film Network even plans to pay fan filmmakers through royalties generated from advertising and sponsorship related to the site.

"Soon, [copyright holders] are going to need those active fans more than ever before," says MIT's Jenkins. "In a world with multiple media options, video on demand and micropayments, fans may become the new gatekeepers who help direct consumers toward interesting and engaging media content. The smart media executive should figure out which direction the media-consuming public is moving, run around in front and shout, 'Follow me.'"

What motivates most fan filmmakers is the desire to see other stories based on their favorite movie, TV series or superhero. Young says fan films can also help to supply a missing piece of the story that, without their creative efforts, might never have been pursued by the original creators.

Young points out that there are no new episodes or shows based on "Highlander," the inspiration for his own creation. And after the critical and box-office drubbing of the last movie, "Highlander: Endgame," the future of this franchise's film series is in doubt. Similarly, Lucas has stated that he will not make a sequel trilogy to his "Star Wars" saga.

"I see the 'Star Wars' fan-film community only growing more once [Episode III is released]," says Young. He feels that fan filmmaking has grown to such a point that "if the creators won't give you more, now you can simply create more yourself."

Considering the extent to which digital filmmaking and broadband Internet technology have already advanced and converged, some of the more extreme possibilities of the fan-film scene may not sound so far-fetched: Will there come a time when fans "take over" TV shows, movies or other media properties? Will fan filmmakers create the next "Star Wars" trilogy in Lucas' place?

"In a few years, there could be 50 [fan-made] 'Star Trek' series online," says Young. "That is very exciting. It also forces the professionals to work harder and really pay attention to what fans want. Hey, we're making what we want to see. If that's not what they're producing, then they should catch a hint."