Bush to Gore: No thanks

He rejects an offer for statewide hand recounts in exchange for no litigation and says the election process must be over by Saturday. 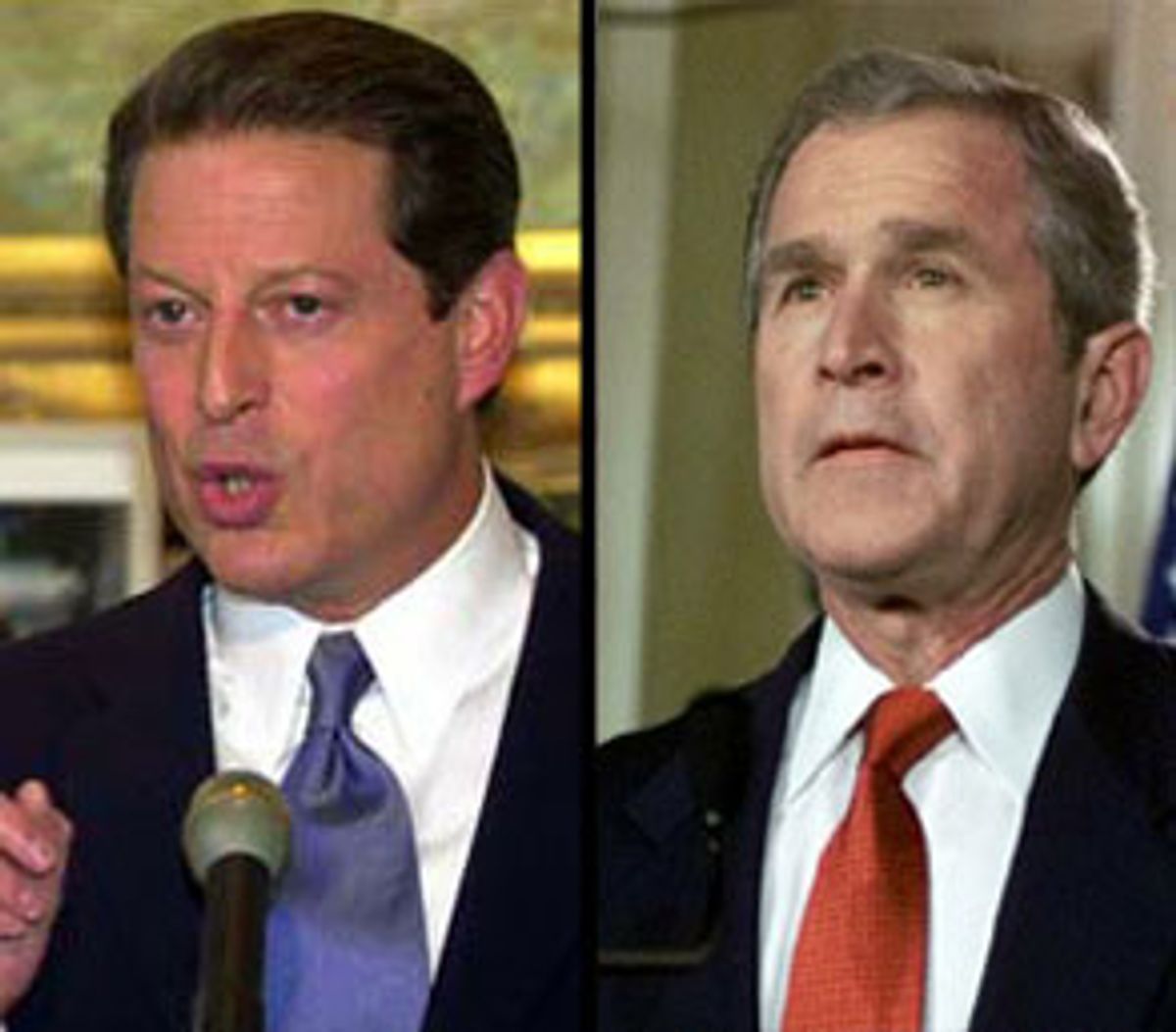 In the final counter-punch of a day packed with them, Texas Governor George W. Bush announced shortly after 10 p.m. EST that he was rejecting Vice President Al Gore's offer for a statewide manual recount of Florida's presidential ballots. Gore had made the offer earlier in the day, adding that he would not challenge the results should Bush accept the deal.

In his brief speech, Bush said that Americans "have seen for themselves that manual counting...introduces human error and politics into the voting process." He said a statewide hand recount would "compound the error" represented by the Gore camp's demand for the recounts in several heavily Democratic counties. Manual counting is "neither fair nor accurate," he said. "It would be arbitrary and chaotic."

Bush argued that the only fair solution to the impasse would be to accept the vote tallies already reported by the counties on Tuesday afternoon and add to them the totals from absentee ballots, which must be in by midnight on Friday. The Bush camp, and many observers, believe that the absentee ballots will break in the governor's favor.

Bush's speech followed by an hour the announcement by Florida Secretary of State Katherine Harris that she was denying requests by Palm Beach, Broward and Miami-Dade counties for an extension in delivering final vote tallies. The counties had asked for more time to complete hand recounts of the votes cast -- a process widely viewed as favorable to Gore's White House hopes.

Harris, a Republican and co-chair of Bush's Florida election campaign, stated in her announcement that the reasons given by the counties in their requests were "insufficient to warrant waiver" of the deadline. She stressed that she made her decision "carefully, consistently, independently and, I believe, correctly."

Harris said she intended to certify the winner of Florida's presidential poll on Saturday after all absentee ballots received by the Friday deadline are included in the tally. She acknowledged, however, that the schedule "is subject to judicial intervention."

Harris' decision will almost certainly provoke a quick legal response from the Gore camp, which has accused her of making her decisions on a partisan basis.

In his statement earlier in the day, Gore not only offered to abide by the results of a statewide hand recount but also proposed that he and Bush meet "as soon as possible," even before the final results are in. He said that he hoped the meeting would "improve the tone of our dialogue in America" and unite the public around the eventual winner, whoever he may be.

In an apparent effort to convince the public that he would not endlessly litigate in order to win the race, Gore stressed his commitment to honor "the true intentions of the voters" and said his proposal could end the election gridlock "in a period of days, not weeks."

Gore's proposal, which he reportedly wrote alone and then read from a teleprompter, appeared designed to address criticism of his campaign, in particular its selection of predominantly Democratic counties for hand recounts. The statement also clearly sought to quell concern that the Democrats would file lawsuits that could prolong the process until the middle of next month or later.

Gore spoke to the nation from what his camp apparently felt with a position of strength. Earlier, the Florida Supreme Court struck down Harris' suit to halt hand recounts that several counties wanted to conduct. The court released its decision on Wednesday afternoon, just before 5 p.m. EST.

Harris had wanted the court to stop the hand counts in Broward and Palm Beach counties and to fold the growing number of state lawsuits into a single case. The Bush campaign had signaled its intent to participate in the suit earlier Wednesday, but never signed on as an official party.

The state Supreme Court announcement was just one of several court developments Wednesday.

The 11th Circuit Court of Appeals announced just after 2 p.m. EST that the entire court would hear appeals filed by the Bush campaign and three Broward County voters seeking an injunction against the hand counting of ballots in four Florida counties. The court ordered the parties to submit written briefs justifying their cases by 7 a.m. Thursday.

At a 4:45 p.m. press conference, James Baker once again insisted on behalf of the Bush campaign that the Gore camp's various lawsuits were to blame for the never-ending legal process. They "keep filing lawsuits and keep refusing to accept any deadline until the results change," Baker said, before going on to accuse Gore campaign aides of making "misleading" statements.

A 2 p.m. deadline set by Harris for counties to submit written explanations for why they should conduct hand recounts came and went, with Palm Beach, Broward and Miami-Dade counties filing missives to Tallahassee. In its letter, the Palm Beach County Canvassing Board stated that enough discrepancies had been found in a limited recount to indicate that a full hand recount could "affect the outcome of the presidential election." Broward County's board offered pretty much the same argument, with at least one interesting addition: a revelation that its county elections supervisor had left the state for four days immediately after the election for a family vacation. It was Miami-Dade County that offered the most practical excuse: State law, it said, entitles the county to conduct a manual recount.

In another curious development, Collier County has discovered 25 additional ballots that haven't been counted. In a letter to Harris delivered before the 2 p.m. deadline, Collier County Supervisor of Elections Jennifer Edwards reported that her staff had discovered two dozen ballots in a sealed envelope, as well as a primary ballot someone had used to vote in the general election. The county requested permission to deliver a count of those ballots on Friday, which is also the deadline for overseas absentee ballots.

The Florida Supreme Court got pulled into the drama earlier on Wednesday, when Harris' appeal to the justices took the battle for control of the vote tabulation to a new level. She asked the court to stop all recounts until lawsuits attacking the vote are consolidated. "Without question, this court must make it clear that the election of the president and vice president is not a matter of local pleasure," her petition read. "It is, at the least, a statewide matter of concern. This court must assume control over this litigation to preserve its ability to establish standards and to protect the voters of the state." In addition, Harris called for "butterfly ballot" lawsuits to be moved from Palm Beach to Tallahassee.

As the spotlight shifted to the state's high court, canvassing board officials in Broward County voted 2-1 to honor the Gore campaign's request for a hand recount of the county's 588,000 ballots. The recount was expected to begin late Wednesday and be completed by Monday, with as many as 100 workers counting ballots at a time.

In other legal activity Wednesday, Palm Beach County Circuit Judge Jorge Labarga ruled that it is up to the county's canvassing board to determine whether dimpled ballots -- those with punches that didn't go all the way through -- can or should be included in a hand recount.

And Republicans failed in their efforts to oust Carol Roberts, one of the more outspoken members of the Palm Beach County Canvassing Board. Republicans had accused her of manipulating ballots, but Roberts refused to recuse herself, and the board opted not to take action against her. In denying the allegations Roberts said, "As a member of this board, I have been and continue to be fair."