The director of "The Opposite of Sex" returns with a romance featuring Gwyneth Paltrow and Ben Affleck. Who could have predicted the mess that results? 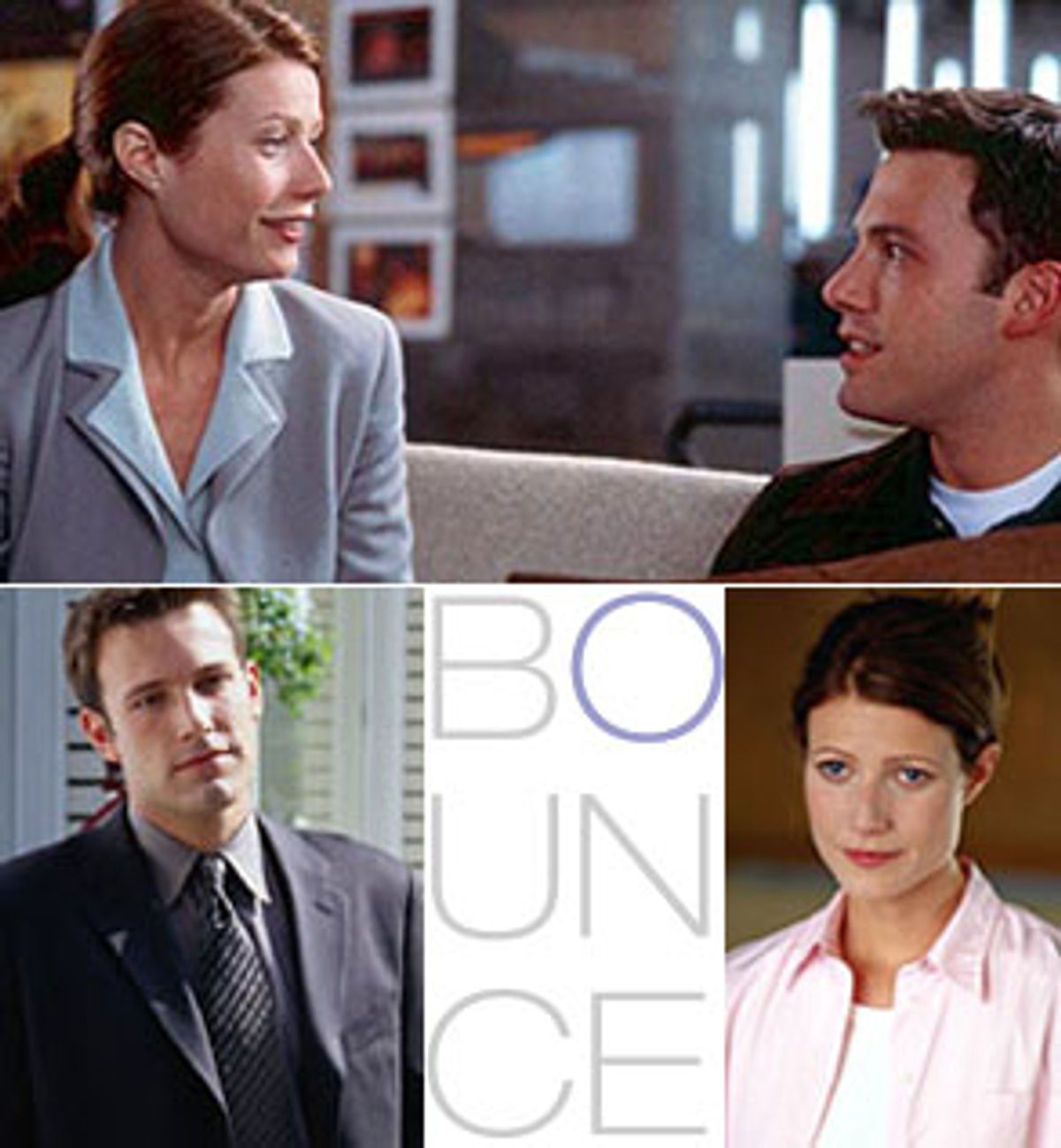 It sure looked like director Don Roos, for his second film, was getting the kind of opportunity every indie filmmaker not so secretly craves. His enjoyable debut, "The Opposite of Sex," established him as a hip but not quite dangerous alternative force in movieland; for the follow-up, he had Ben Affleck and Gwyneth Paltrow -- two of Hollywood's most bankable young stars -- signed up for a contemporary love story. Surely these were the keys to the kingdom. Art and money should have joined in harmonic convergence, followed by glowing reviews and fistfuls of awards. Think "American Beauty" crossbred with "Love Story," or "The Way We Were" for a generation scarred by irony.

Instead, "Bounce" is a pallid, mediocre tale that treacles its way through well-worn channels. Its story -- a plane-crash widow is romanced by the recovering sleazeball who believes himself responsible for her husband's death -- is outlandish without being entertaining. The humor and insouciant 'tude of "The Opposite of Sex," in fact, have vanished, and this deadeningly predictable movie seems to have been directed by the same software program or infobot that creates most Hollywood romances. There are a few intriguing glimmers of character and drama early on, but these are just flashes of lucidity during the film's long slide into a lovelorn stupor.

If anything, this movie exposes how bland and conformist American filmmaking remains despite all the rhetoric about how independent productions have transformed the business. When you insert stars of Affleck and Paltrow's magnitude, some sort of default mode kicks in, and all movies revert to the path of maximum safety and least resistance. Even a writer and director with Roos' evident talents (his mixed screenwriting record also includes "Boys on the Side" and "Single White Female") becomes unable to escape the swamps of formulaic goo. Despite the understandable appeal of Paltrow's radiant complexion and Affleck's impressive chest, I can't imagine audiences will find much fun here.

To some extent, the failure of "Bounce" may boil down to pheromones. Both of these appealing actors do the things they do: Affleck plays a bluff, self-important guy trying to make contact with his decent core, while Paltrow virtually radiates emotion, unable to keep her heart and soul concealed beneath her adult surface. But to my taste, they don't sync up. They're just not right for each other. I fretted for both of them, in a way that didn't serve the movie well. Buddy (Affleck) is a womanizing, Armani-clad ad executive; he's supposed to be a shallow creep who is transformed by his relationship with Abby (Paltrow), but his repentance strikes me as dubious and temporary. Widowed, intense Abby is exactly the kind of wounded bird that guys like Buddy torture without meaning to. I imagine them in the future, stuck in an Ingmar Bergman-esque marriage full of locked bathroom doors, incoherent blubbering and overnight disappearances.

The saga of Buddy and Abby's unhappy future might be more interesting than the indifferent fable about their initial contact that we're dragged through here. "Bounce" relies on one of the oldest romantic plot devices known to humanity -- one found in Shakespeare, opera, film noir and screwball comedy. It's the story of two people who fall in love while one of them (generally the man) is concealing highly relevant information. He's a cop, he's her cousin, he's her family's mortal enemy, he's that one-night stand in Tulsa, Okla., she can't remember, whatever. Alfred Hitchcock's "Notorious," in which Cary Grant doesn't tell Ingrid Bergman that he's a government agent checking up on her Nazi connections, may be the definitive modern example.

Roos remains a keen observer of American manners and mores, which only makes it more regrettable that "Bounce" is finally so conventional. When we meet Buddy, he's snowed in at O'Hare Airport after scoring a major airline account. An alcohol-fueled chance encounter with two strangers ends with Buddy -- intent on bagging a Texas businesswoman named Mimi (Natasha Henstridge) -- offering his Los Angeles boarding pass to a writer named Greg (Tony Goldwyn). This opening sequence is keenly captured and virtually crackles with flirtation and combativeness. Then Greg's plane plunges into a Kansas cornfield, and Buddy goes into a boozy tailspin while his posh ad agency is hired to make a series of mawkish commercials (titled "We Remember") in tribute to the crash victims.

Meanwhile, in the suburban hinterland a few miles north of Buddy's Venice Beach condo, Greg's wife, Abby, tries to rebuild her life. Paltrow's wholesome glow can be a little irritating, but she puts her heart and soul into everything she does, and her performance is perhaps the best reason to sit through "Bounce." Abby is of course stepped on and heartbroken -- her basic personality seems to be that of a tenderhearted soul who can probably struggle through "Both Sides Now" on acoustic guitar. Like Cameron Diaz in "Being John Malkovich," Paltrow feels intense compassion for her frizzy-mouse character, but doesn't play her for pity.

After a stint in rehab, Buddy tracks down Abby at her job leasing strip-mall real estate and begins awkwardly courting her, without, of course, informing her that he was the last person to see her husband alive. Paltrow is delicious as someone trying to play the part of high-powered real estate agent, and these are Roos' last, best scenes before "Bounce" shifts to automatic pilot. The pair's first meeting is compromised by lots of random loud noise and an angry Rottweiler. They end up having coffee on the banks of a four-lane boulevard, with Buddy in borrowed sweat pants and Abby explaining that she has started smoking to get off nicotine gum.

But even while you're still hoping that "Bounce" might be going somewhere besides its preordained destination there are signs of trouble. Later on, when the luscious Mimi has reappeared and the truth has been revealed, an angry Abby demands of Buddy, "Who do you think you are, God?" It's a good question, and the script never directly addresses the question of what Buddy thinks he's doing by looking up Abby in the first place. I'm afraid the only answer is that fate, as the movies understand it, demands him to. Once he does, "Bounce" can settle into a groove and expel its last traces of originality like a sigh: Boy gets girl, boy charms girl's gawky 8-year-old (Alex Linz), girl learns truth about boy, boy must prove his worthiness to girl, sunset on the beach. (No, really: This movie ends with a sunset on the beach.)

Sure, Buddy gets choked up at the appropriate moments, but it's hard to shake the sense that he's still the same asshole he was at the beginning, and is just playacting for lack of anything better to do. In the scene where he finally convinces Abby he's a stand-up guy, she's actually watching him testify on Court TV. Affleck is something of a stoical, reactive performer, with the air of a man who keeps his own counsel. As usual, he sails through the movie emotionally unmarked, like a handsomely wrought ship. Successfully sappy romances appear to suspend the passage of time and the rotation of the Earth, and convince you that nothing is more important than the couple in front of you. I left "Bounce" with the feeling that Buddy, and his creator, are fatally noncommitted, likely to blow this popcorn stand and move on as soon as they figure out where to go next.