The author of "Watch Your Mouth" and "The Bad Beginning" picks five great books with "bird" in the title. 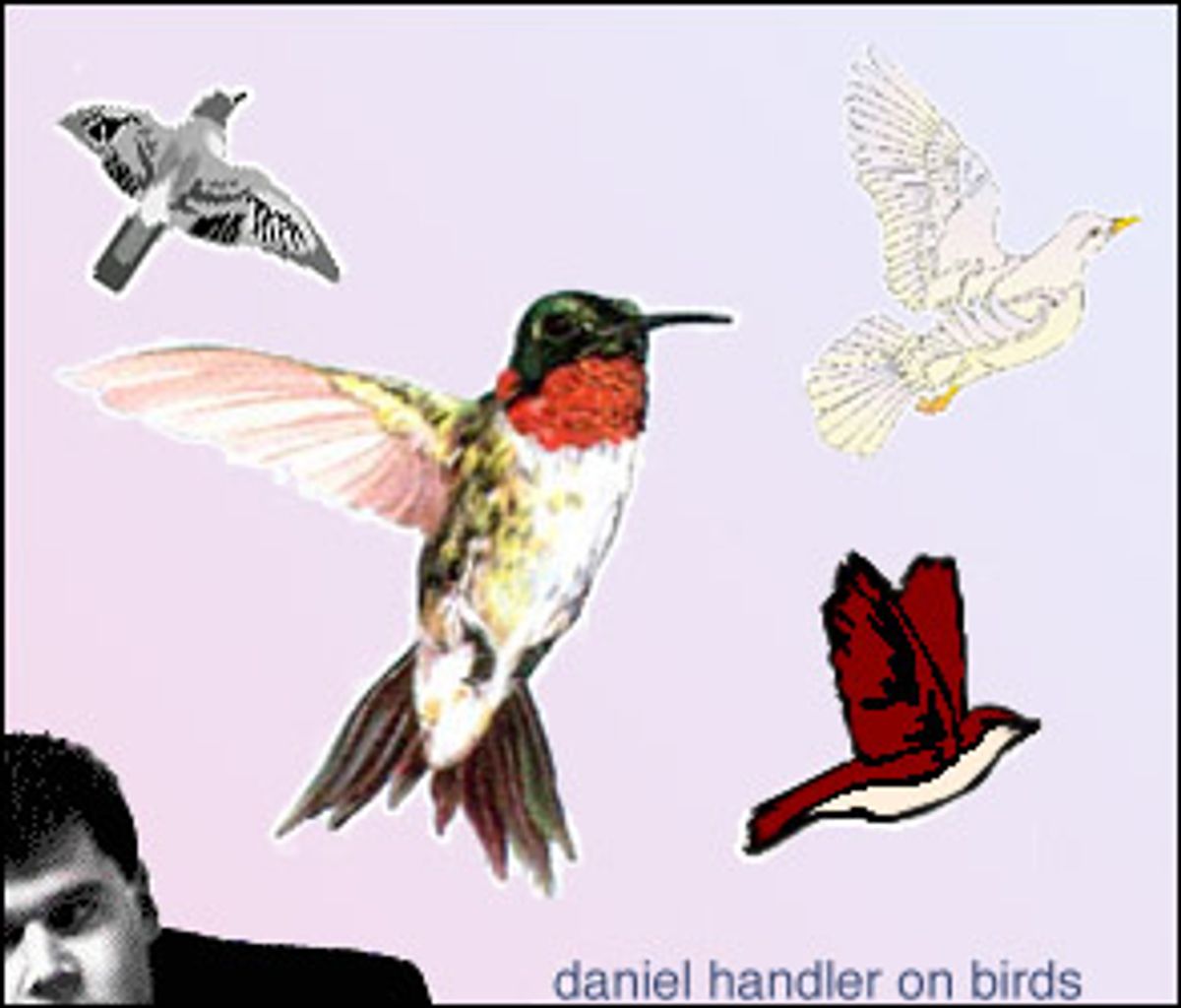 I've lost count of the number of people who have said to me, "Can you name five terrific books that have the word 'bird' in their titles?" I think it's one person, or maybe even less than that. The number of people who have asked me is not important, really. What is important is the word "bird." Well, maybe not important, but fun to say out loud -- go on, try it: "bird" -- and also contained in the titles of the following five books, all of which are terrific.

The Birds by Daphne du Maurier
Let's begin with the book where the birds in the title are attacking you. Actually a longish short story included in different collections of varying quality (several of which are titled "The Birds"), du Maurier's tense and cerebral tale packs a surprisingly powerful punch. A nuclear family, led by the sort of sturdy, succinct hero required by law to be in all British fiction of the 1950s, is at first curious, then annoyed, then frantic and then something worse than frantic as the ornithological fauna peck and squawk and blow the house down. Like Hitchcock's adaptation, the cheesy sci-fi premise slowly fades into something truly eerie.

The Wind-Up Bird Chronicle by Haruki Murakami
I've said it before, but I'll say it again because maybe you were dozing earlier: Haruki Murakami is the greatest living practitioner of fiction. With "The Wind-Up Bird Chronicle," Murakami elevates the brilliant, if pyrotechnic, style of early novels like "A Wild Sheep Chase" into a cohesive and original vision that touches on the immeasurable travesty of war, the tiny pinpoints of heartbreak and how an existential breakdown can be restored by the undeniable beauty of new friends and mechanical objects. The most recent Great Novel I know of, "The Wind-Up Bird Chronicle" will restore faiths you didn't know you had lost or ever needed.

Birds of America by Lorrie Moore
"There is a pain in his eyes," Lorrie Moore notes in one of these stories, "something sad and unfocused that sometimes stabs at them -- the fear of a misspent life, or an uncertainty as to where he's left the keys." That thin ice the sentence is skating on -- that tiny, spooky line between the annoying logistics of life and the emotional chasm they try to conceal -- is the reason fiction exists, as far as I can tell. With equal parts wit and pathos, these 12 stories explore an intelligent and lonely landscape populated by people who burst into tears, or guffaws, the minute they're alone, just like you do. There are few collections one can read straight through without getting weary or fidgety, but "Birds of America" works like a perfect pop album -- "Dusty in Memphis," say, or "Sign o' the Times," with the lesser numbers giving the gems room to breathe.

The Bird Artist by Howard Norman
This novel explores one of my personal favorite themes in literature: People Living in Cold, Isolated Areas, Getting Bad Ideas. The setting is the blustery Newfoundland, Canada, town of Witless Bay, in which narrator Fabian Vas is growing up with his jittery, determined family and honing his skills at drawing the local bird life. Winter arrives, and so do the bad ideas: Arranged marriages, long boat trips to shoot puffins, adultery with the lighthouse keeper and drinking whiskey with an impulsive woman whose idea of a gift is a loaded revolver are among the dangerous notions that cloud the gray coastal sky. The plot is melodramatic, of course, like all great plots, but unlike his characters, Norman knows how to keep a lid on a potentially overblown situation. Suspenseful and wise, smart and reserved, "The Bird Artist" is a compelling and chilly read -- perfect for this blanket-warmed time of year.

Homeless Bird by Gloria Whalen
Whalen's young adult novel won this year's National Book Award, and deservedly so. In simple, sparse prose, "Homeless Bird" tells us, detail by detail, just how easily a young Indian girl's life can go terribly, terribly wrong, and how she thinks up a better future all by herself -- and by the skin of her teeth. Like all good children's books, it holds its own with an adult audience. I even found it to be a nice companion piece to a recent adult novel, Sanjay Nigam's "The Snake Charmer," which is a terrific novel but couldn't be included on this list because the wrong animal is in the title.

While we're on the subject, the reason there aren't any ornithological guides on this list is that, let's face it, you're not going to read any. The reason certain books by Anne Lamott and Maya Angelou aren't included is that I don't think those books are any good. The reason Flann O'Brien "At-Swim-Two-Birds" isn't included is that, although I am convinced that it's brilliant, I need to read it a few more times before I understand a single word.