A conversation with Peggy Sirota

In her new collection of portraits, the self-taught photographer hides the world of celebrity behind a fake mustache. 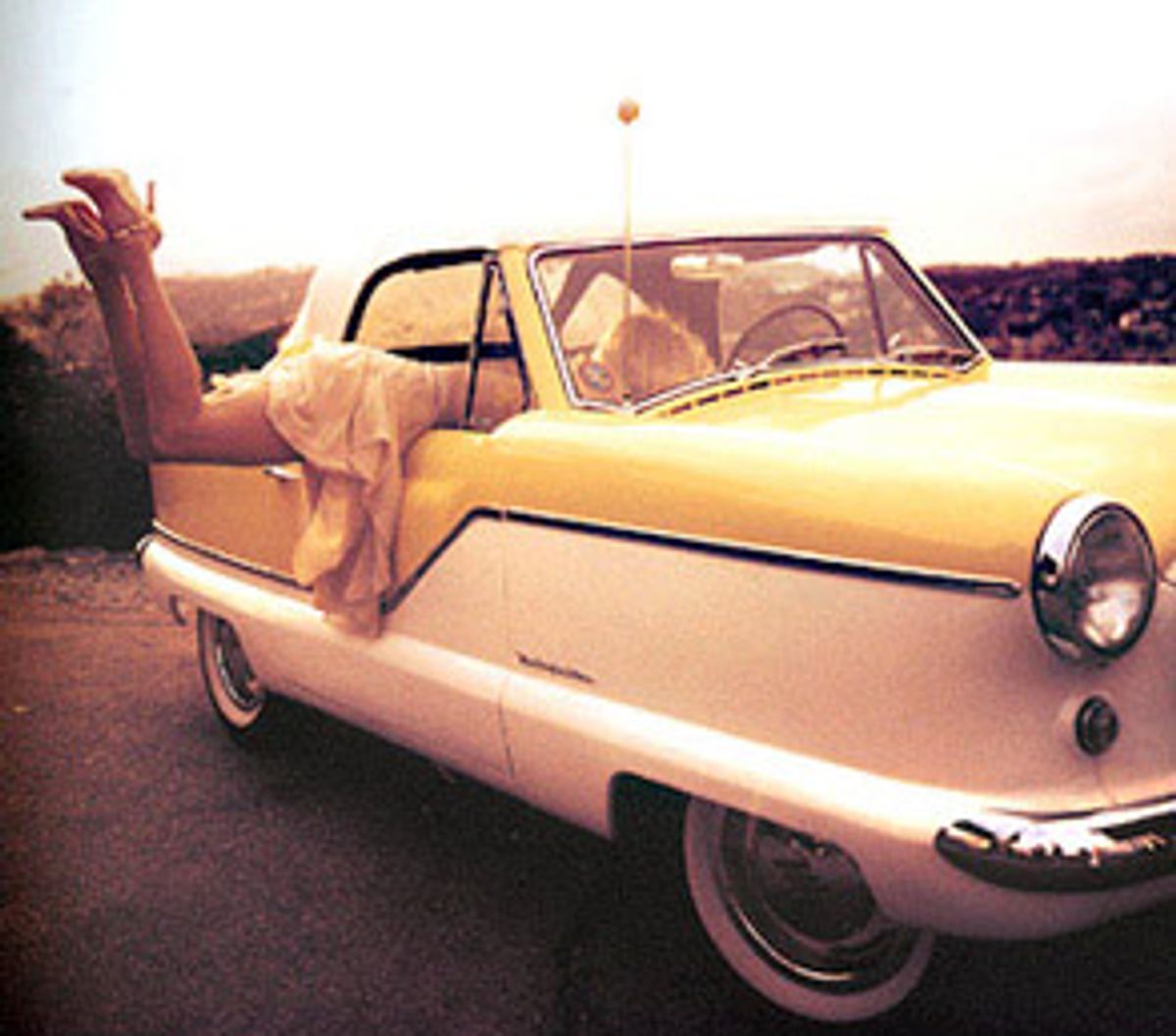 Who's that stooped bald shadow on the wallpaper? Why, it's Ish Oslinshe Het Ladai Alam, of course. The guy with his head in a hole in the ground? That's Fefj Gesdbir. And the toothy chick with the big fake Afro is Ajuil Borters letting her guard down, goofing off like regular people.

These and 169 other celebrity-in-disguise portraits make up "Guess Who?" photographer Peggy Sirota's debut book of portraits that renders household names -- if you live in a name-obsessed household -- totally unrecognizable. Not only are the subjects hard to identify, but the scrambled captions beneath them deliver hours of fun for Scrabble and headache enthusiasts alike.

The three undercover celebrities mentioned above, incidentally, are His Holiness the Dalai Lama, Jeff Bridges and Julia Roberts, but you wouldn't know it from looking at them. Which raises the question of why we look at them at all. Which, of course, is the point of the book.

At times this concept borders on too much of a good idea. Nestled among closeups of notables, their gorgeous kissers variously concealed in plastic wrap, aluminum foil, sterile gauze, underwear, hats, skirts, boxes, pictures, hair, wigs, lampshades, stockings, flowers, lapels and sheets, a few of the images still manage to startle and surprise. Former Vogue and Allure editor and style arbiter Polly Mellen posing as a homeless person on a park bench, flanked by shopping carts, for instance. Harrison Ford in a creepy Harrison Ford mask. Architect Richard Meier sitting spread-legged on the floor, his head bowed in intense concentration, lost in Lego construction. Jenny McCarthy pressing her naked butt to a textured glass shower door, making it wide and dappled. Tim Robbins striding purposefully down a Culver City, Calif., street draped in a sheet with eyeholes and swinging a grease-stained grocery bag like a huge, demented kindergarten ghost.

Sirota, who works primarily as a commercial photographer, is known for her ability to make a personal connection with her subjects. Her shoots are intimate, low-key and playful. On the playground with Sugar Ray Leonard, she slips down the slide. On the streets of Paris, she mugs for actress Beatrice Dalle and helps sweep up with kitsch artists Pierre & Gilles.

I spoke to Sirota after a shoot. With her disheveled dirty-blond hair, brown leather pants and heavy-metal T-shirt, she still looks like the tough art student she never was.

How did you get the idea for the book?

I actually didn't have the idea for the book for a very long time, until I was way into shooting it. I do all these portraits of people where I encourage them to just go for something beyond. In order to do that, I often antagonize them in very silly, almost stupid ways, just to get them to loosen up.

Which of the photos was taken first?

Gary Oldman is really the key to the whole thing. I was shooting him for a magazine, and we'd brought all these hats along. He started trying all of them out and assuming a different character with each one. Then he pulled this over his head -- there he was, this brilliant actor, totally unrecognizable.

What kinds of things did you ask your subjects to do?

Well, for instance, with Jeff Bridges, I never intended to use a shot of him with his head in a hole. I was just trying to get him to relax with me. We were walking along to a location, and I said, "Oh, this is cool! Put your head in the hole." And he was like, "No, no way!" So I handed him the camera and said, "OK, you take my picture. I'm gonna put my head in the hole." So he finally did it. It's an instinctual way of trying to get people to loosen up. It's just a game.

So you had these picture saved from other shoots ...

I had, like, 50 of them. And I saved all of them, without really thinking about it. But one day, I was looking through them and got the idea.

Were there a lot of surprises in shooting this book?

Oh yeah, good surprises and bad surprises. I always had ideas about what I wanted people to do, but some people just totally floored me!

That was the one idea that I wanted her to do the most. She's very sweet and I didn't want her to feel uncomfortable.

Not an inch of her is showing.

But she had no problem with it. She was like, "What do you want me to do?" and did it right away.

What were some of the bad surprises?

Well, there's one guy -- kind of a controlling guy -- who wanted to know what we were going to do beforehand. He was supposed to be kind of floating and I just thought it was boring, but I could not move this guy. It was a little gag. I was shooting it from the back, so I stepped way back and revealed the gag -- that he's hanging on something as opposed to just floating. I had to do it. It was funny. But he was someone I'd thought would be cooperative and fun.

What are the most important things to keep in mind in celebrity portraiture?

Being comfortable enough with each other, striking a chord, being comfortable enough to be stupid and funny together and not be judgmental. And that's been the most wonderful experience -- making people laugh. Eric Roberts [who posed for his photo with breasts] was like, "Yeah, of course, put them in there."

With Willem Dafoe, we were in his theater in New York, and there was all this makeup lying around. And he said, "You have to see this thing that I do," and taped his lip.

Who else got in the spirit of it?

Chrissie Hynde wanted to come in her own costume. So I said, "OK, but if you're going to come in your own thing, it's going to be a wedding dress or something really out there." And she said, "I'll meet you at 3:15 at the Rose Garden or somewhere in Hyde Park." And sure enough, at 3:15 this woman comes walking by looking like a secretary, and I knew it was her.

How did you wind up doing celebrity photography?

I didn't set out to be a celebrity photographer and go down this road of getting approvals from everybody, putting beautiful light and makeup on an actress, making her look recognizable and happy. I'm not saying that my work is that different from everybody else's. But breaking the rules speaks to the core of who I am.