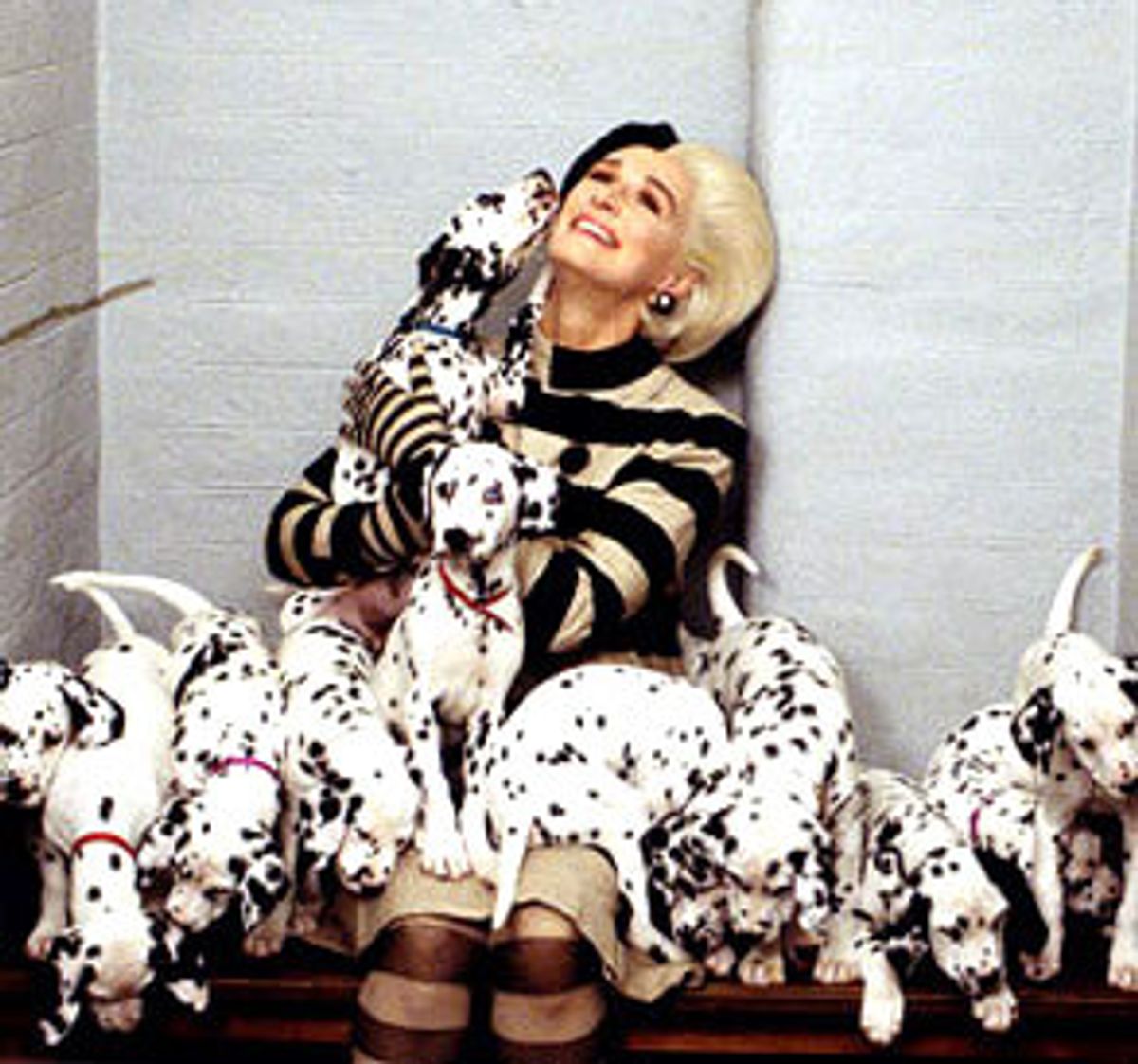 When it comes to drag queens, there are several -- Divine, RuPaul, Katherine Harris -- whom I'd rather watch than Glenn Close in "102 Dalmatians." Reprising her role as Cruella De Vil, Close shrieks and grimaces and mugs and pouts, spewing sugar and venom, popping her eyes, contorting her mouth and pancaked puss, while director Kevin Lima's camera comes in close to get every precious drop of this kiddie-movie camp.

The charmless sequel to the live-action version of Disney's most charming animated feature (itself taken from Dodie Smith's lovely little novel "The Hundred and One Dalmatians") gets underway when imprisoned fur fetishist Cruella is conditioned, à la Alex in "A Clockwork Orange," to be revolted by her former craving. Paroled, she devotes her fortune to saving a London dog shelter on the verge of foreclosure. Her parole officer, a bland young thing played by Alice Evans, has, as it turns out, a litter of Dalmatian pups sired by one of the dogs Cruella attempted to turn into a fur coat in the previous installment.

Of course, Cruella's cure proves temporary, she goes back to her "dognapping in the name of couture" ways, she targets the Dalmatian pups as her new raw material and the bland parole officer finds an equally bland mate, Ioan Gruffudd, in the young fellow who runs the shelter saved by Cruella's forbearance.

Other performers show up -- Eric Idle as the voice of a hectoring parrot who thinks he's a dog and Gérard Depardieu as the fur-mad French designer Cruella hires to realize her dog-coat masterpiece. (Depardieu makes a great entrance on the fashion runway, his massive body swathed in a furry he-man top, his tree-trunk legs barely draped by a leopard-skin kilt, with a leopard's head functioning as codpiece. It's quite a look -- for a second, Depardieu is the swish Conan.) But though the members of the cast manage to stay in character, it's a wonder they don't cower from Close as much as the pooches do.

Close got all sorts of praise for the first movie. Is it because she's considered a "serious" actress playing daringly madcap? She did the same sort of grotesque overacting in "Cookie's Fortune" (though Robert Altman made sure she wasn't the whole show). There's no modulation, no peaks or valleys, in Close's performance -- she's like a trick-or-treater who jumps out of the bushes to scare you and thinks that it will be just as effective if she keeps jumping out of the same damn bush for 100 minutes.

Cruella De Vil has been a woman close to my heart since the first time I laid eyes on her in the animated original. Much of that is due to the wonderful Bette Lou Gerson, who provided the original Cruella's voice. And what a voice! A parody of Bette Davis' cyanide-laced remarks, Gerson used low tones and sudden swoops, and proffered the most insincere endearments, all at the pace of a mine car descending a mountain. If you can imagine a corn husk that someone smeared with sugar in an attempt to pass it off as a piece of molasses bread, you can imagine Gerson's voice.

That's a sort of subtlety that's beyond Close. This is the performance of someone who doesn't really respect or understand comedy. She thinks that the way to play comedy is to act funny -- the deadliest choice imaginable. There's no inner life to the character, nothing beyond a conceit. The cartoon Cruella was more three-dimensional.

But then Close is working in a movie without much of a sense of comedy. Lima's idea of a really hilarious gag usually involves a noggin getting bashed or bones getting crunched, all of it telegraphed with a precision that would shame Western Union. The whole movie is overbright, overloud, antic, telling us the characters and animals are endearing rather than allowing them to reveal themselves as such.

It's more obvious here because of the delicacy of the animated original (the only Disney animated feature that deserves to be called delicate). What made the first "101 Dalmatians" unique in the Disney canon is that it was one of the few films that didn't emotionally abuse its young audience (in the time-honored tradition of "Bambi," "Dumbo" and "The Lion King," which made me feel I was at some pornographic ritual where the screaming children around me were human sacrifices). The danger the animals face was done quickly, not milked for bathos. The comedy was held in check enough to be funny and not just bumptious.

And visually the film had the fragility of watercolors. The grays and pinks of the daylight scenes, and the hushed chill of the nighttime blues, were indelible. The action of the movie might have been the sort of noise you hear at night in a far-off field and stir in bed wondering what it is. The movie seemed to be taking place when the whole world was asleep and animals had taken over, in effect becoming the night watchmen to whom we've entrusted our well-being. The movie teetered on the edge of nightmare just enough to make its reassuring bedtime story tone all the more precious.

That's too much poetry for the live-action versions. But then, other than bucks, the rationale for live-action versions of Disney's animated films escapes me. Joe Dante's terrific comedy "Matinee" features a dead-on parody of the sort of Disney comedy we all grew up with, the kind where crooks wear striped jerseys and Lone Ranger masks and chefs have big, poofy white hats. Dante captures the weird stifling air of those pictures, the sense that we were meant to love them though they seemed to come from an alternate universe. Going to Disney comedies was always like being given a Christmas present that's all wrong but that adults expect you to find delightful.

I swear I can still chuckle over things in "The Barefoot Executive" or "The Computer Wore Tennis Shoes" or "Son of Flubber," but I find the attempts of the new Disney comedies to seem like hip, real movies alienating. The flashy graphics and faux hip-hop over the credits, ostensible links to the pop culture we all know, just make the mushy, corny center seem weirder and more out of place than ever. If you're of a certain age, "102 Dalmatians" can make you think that Dean Jones was actually pretty sharp.