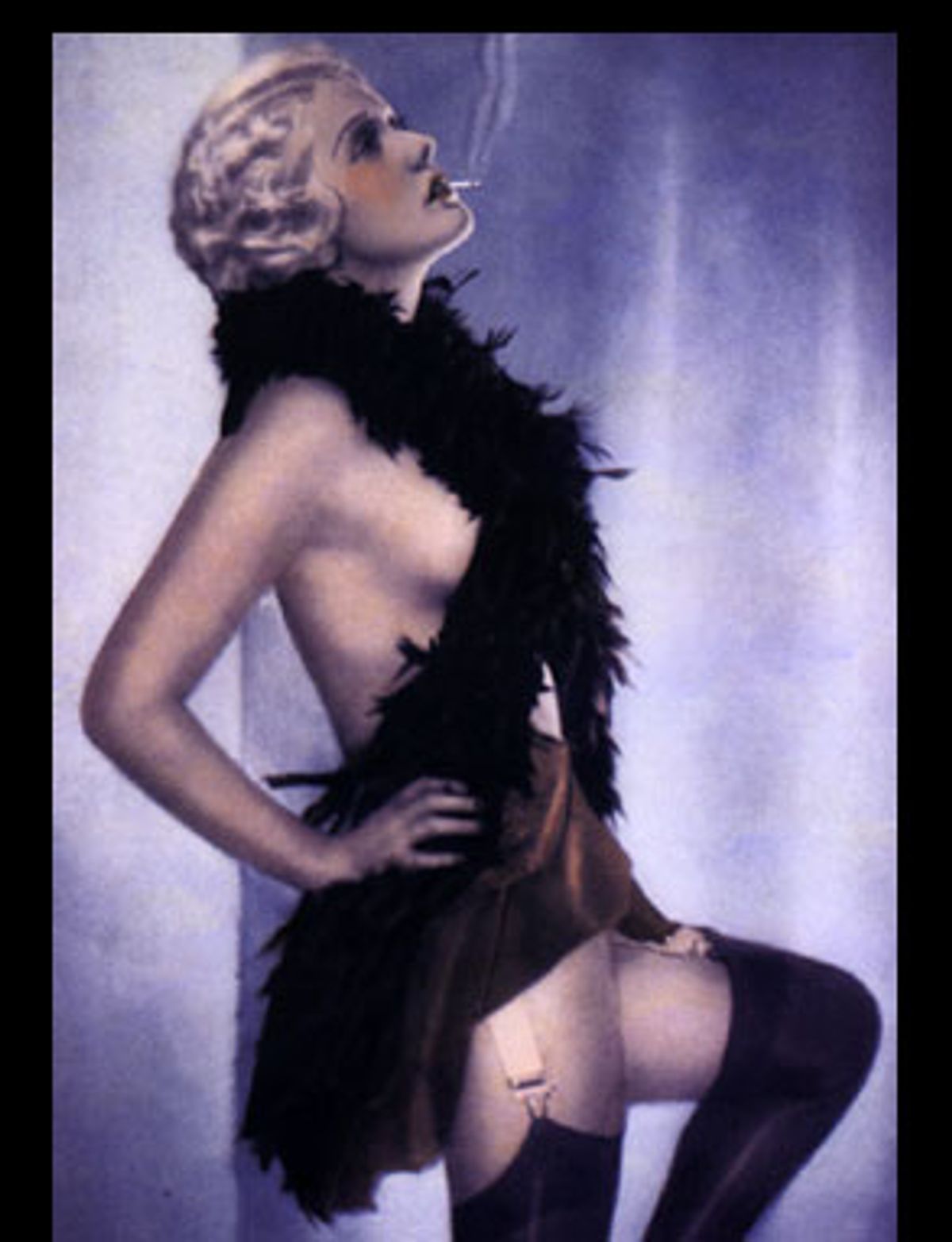 Inflation is so rampant that the local paper currency is good only for toilet paper. Cocaine, morphine and opium are peddled on every street corner. And more than 120,000 desperate women and girls of every age and stripe sell their bodies for a pittance, including mother-daughter prostitution teams and brazen streetwalkers well into the third trimester of pregnancy.

Such was the glory that was Weimar Berlin, a burg American writer Ben Hecht called the "prime breeding ground of evil." Most are familiar with its reputation as a crime-ridden sewer of frenetic debauchery through period classics such as Fritz Lang's "M" and Josef von Sternberg's "The Blue Angel," stage productions of Brecht's "The Threepenny Opera" or screenings of Bob Fosse's lurid, leggy movie musical, "Cabaret." However, very few of our assumptions about that decadent interwar wonderland are based on actual documentation of Berlin's whorish past. And most of it has been filtered through the arid prose of academia.

Gordon says his massive, wallet-busting collection began as part of a job assignment from the Goethe Institute, a program supported by the German government to promote German language and culture.

"Back in 1994, I got a grant from them to do a cabaret extravaganza in San Francisco starring Nina Hagen," recalls Gordon. "I decided to do a real, three-ring Weimar production based on the life of Anita Berber, the great sex goddess/flapper of the age. We had a lot to go on, research-wise, except the visuals. I went to the library, and I was amazed to find nothing except old George Grosz and Otto Dix paintings and some rather tame photos which had been reprinted endlessly."

Gordon discovered that even the research done by Hollywood types for "Cabaret" came up with little to back the thesis that Weimar Berlin was the hotbed of vice Christopher Isherwood depicted in "Berlin Stories" (the book that inspired "Cabaret"). Could it be that this fabled city of whores never existed? That it was all an invention of perverse intellectuals? Gordon began combing the antique shops of Germany and Austria as well as those of Northern California, where a number of Germans fled after Hitler's rise to power. Soon he went from having nothing to having more than 20,000 genuine Weimar Berlin relics. Hagen's show was history, and Gordon realized he had the makings of a book on his hands.

Designed like a magazine with sidebars and lists, Gordon's embarrassment of riches certainly lives up to the title "Voluptuous Panic" -- a translation of the Latin term "ilinx," which refers to a mixture of ecstasy and terror.

"I thought that word summed up Weimar Berlin's unusual sexual rush," says Gordon. "It wasn't just sex the way, say, the French would have enjoyed it, like a good meal or music. Rather, it was sex that was always mixed with something else, like danger, power or death."

Indeed, the sheer variety of odd sexual tastes Gordon documents in "Voluptuous Panic" is astonishing. For instance, Gordon identifies 16 different types of prostitutes, including "telephone girls," enormously expensive child prostitutes ages 12-17 labeled "Marlene Dietrichs" or "Lillian Harveys" according to their physical attributes. These girls could be ordered by phone and delivered by taxi to the client. There were also so-called minettes, who acted out S/M fantasies, and "demi-castors" (French slang for "half-beavers"), young women from good families who made extra cash by hooking part time.

In tribute to the German mania for taxonomy, Weimar Berlin boasted an equally diverse assortment of lesbian and gay labels. "Sugar-lickers" were nighttime gay pederasts, and "Breslauers" were men with large penises. Lesbians might be ultrafemme "madis," or tuxedoed, highfalutin "dodos," and so on. And there seemed to have been countless nudists societies -- some for libertines, some for health nuts and still others with ties to political parties like the Nazis or the Communists.

"Another thing which distinguished Berlin was the popularity of transvestism," Gordon notes. "There've been transvestites in every culture and time, but in Berlin they organized, they had special clubs and they became an entertainment. Strangely, the lesbians identified with the male transvestites and the homosexual men despised them. The major organization for gay men (the Militant Homosexualists) saw themselves as supermale. Transvestites were at the bottom of their Nietzschean hierarchy."

Transvestism proved to be one of the main attractions of Berlin's burgeoning sex tourism industry. The pathetic situation of the German mark ensured tourists a real deal on the little boy or girl who'd caught their eye, and, unlike other European capitals that employed red-light districts for their sex industries, Berlin had no red-light district, or real censorship for that matter. Indeed, it seems the entire city was a red-light district. According to Gordon, Berlin's police commissioner even wrote articles boasting that sex was the premier industry of Berlin, though Gordon established that it was actually a respectable third after finance and publishing.

A confluence of factors created Berlin's unique status as the sex Mecca of Europe during the Weimar period. Germany's recent defeat in World War I did its part, encouraging general disillusionment and leaving behind thousands of war widows in Berlin's populace of 4 million with no means of realistically supporting themselves other than by prostitution. Gone were the Kaiser and the old morality, and in their place was a new liberal republic. And then there was the general economic collapse and inflation. In October 1923, German currency traded at the astronomical rate of 4.2 billion marks to the U.S. dollar. Gordon points out that "the most exquisite blow job" to be had in Berlin never cost an American tourist more than 30 cents.

Berlin even had its own urban myth to explain the city's frenzied, oversexed atmosphere. They ascribed it to the Berliner Luft, the "amphetamine-like air" of the city that made their hearts beat wildly at night and reinvigorated them at dawn.

Whether or not Berlin's unique brand of decadence was "in the air," there apparently was the feeling in Weimar culture that anything goes. A quote from Luigi Barzini's social memoir, "The Europeans," used by Gordon in the book, illustrates this point particularly well:

"I saw pimps offering anything to anybody, little boys, little girls, robust young men, libidinous women, animals. The story went around that a male goose of which one cut the neck at the ecstatic moment would give you the most delicious, economical, and time-saving frisson of all, as it allowed you to enjoy sodomy, bestiality, homosexuality, necrophilia and sadism at one stroke. Gastronomy too, as one could eat the goose afterwards."

But if "Voluptuous Panic" enhances Weimar Berlin's reputation as a 20th century Sodom and Gomorrah unlike any other, its author does take issue with the popular notion that the era's dissolution led inevitably to the rise of the Nazis and Hitler's appointment as Reichschancellor in 1933.

"The reality is that Hitler came to power for all kinds of magical reasons. Hitler's nationalist partners brought Hitler into government to humiliate the Nazis and prove they couldn't govern, and the opposite happened. If you look at the week-by-week or day-by-day description of how the Nazis came to power, it had nothing at all to do with the social life of Berlin. It had to do with all these economic factors and political maneuverings that even the Nazis couldn't foresee," Gordon says.

"It was important to me to disprove this idea that decadence leads to fascism," he continues. "It's a very puritanical American equation, that if you have a good time there's some awful aftermath. But it's factually and historically not true. At the time, no one made the connection, and no historian has shown this to be the case."

Still, Gordon concedes that as the Nazis consolidated power, they grew more reactionary and moralistic. And though it took some time (whorehouses were still operating during the 1936 Berlin Olympics, says Gordon), the Nazis eventually crushed every last vestige of Berlin's vast sexual playground. Even if Weimar Berlin's excesses did not lead to the establishment of the Third Reich, Hitler's government in the end did away with that German El Dorado "Voluptuous Panic" so lovingly re-creates.