Dick Cheney will recover from his heart attack, as Dubya did from his boil; but the GOP's viciously aggressive style will leave lasting scars on the body politic. 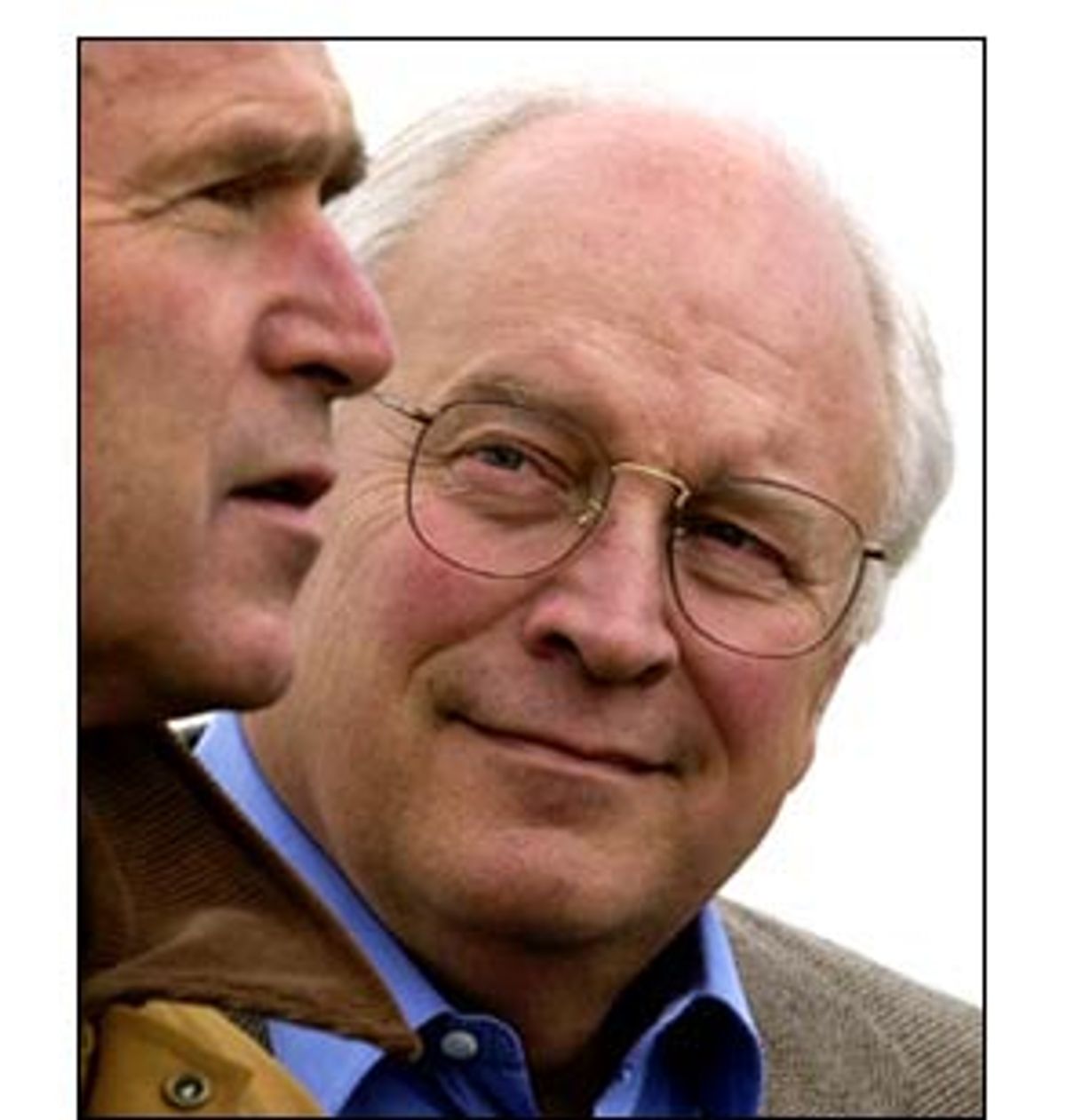 First George W. Bush, a believer in the literal truth of the Bible, found himself afflicted with a biblical plague: boils (or one, at least). Now VP-in-waiting Dick Cheney is hospitalized with what is being diplomatically described as a "slight" heart attack, if any heart attack counts as slight for a middle-aged man who has already survived three previously, and bypass surgery to boot.

When I was growing up we cruelly joked about Florida, with its legions of retirees, as God's waiting room. But from the evidence of the last couple of weeks it looks as though God is a Florida voter who just double-punched his absentee ballot.

Anyone who has ever been in the hospital -- and that includes me -- sympathizes with Cheney and wishes him a speedy recovery. But with the ongoing vote count suggesting that Bush remains the most likely heir of 1600 Pennsylvania Ave., Cheney's heart attack raises real issues.

First, you've got some serious questions of presidential priorities and judgement: Cheney has had four heart attacks in barely over two decades, his first at age 37. What was Bush thinking when he chose as his vice president a man who needs one of those ER crash carts trailing him along with the Secret Service agents?

Cheney seems destined to cause the Bush administration trouble. Though you may have easily forgotten, this week's heart problem comes scant weeks after the former defense secretary brought early humiliation on the Bush campaign by refusing to ditch his petroleum-executive stock options. One is about medical fitness to serve and one about ethical fitness to serve, but each is a reminder that we are close to inaugurating as president a man whose pliability in the hands of his father's former advisors trumps all other concerns.

Today those advisors -- Cheney, James Baker and company -- see historic vindication a hair's breadth away. But while Bush putters about his ranch, the rest of us need to pause and remember how those advisors looked the first time around. It was Baker and Cheney, for instance, whose confused signals through our ambassador to Iraq gave Saddam Hussein a green light to invade Kuwait. It was Baker in particular who signed the permission slip for Slobodan Milosevic's brutal siege of Sarajevo with one of the most callous shrug-offs of genocide on record: "We don't have a dog in that fight."

What's more, the affliction of both Bush and Cheney with stress-induced illnesses really does raise some alarm bells for the presidency in the next four years. You've got to ask: If a close election causes Bush to break out in a boil and Cheney to have a coronary, what will happen in a genuine crisis -- in whatever equivalent the new century brings to the Cuban missile confrontation, for instance? What will President W. look like after a weekend at Camp David negotiating between Barak and Arafat?

The fact is, the whole Republican team seems addicted not just to stress but to a kind of Type-A rage. They don't just feel their resentment; they live it. It's a fury that was amply evident during President Clinton's impeachment but which the GOP successfully kept under wraps during a campaign that was allegedly about a new civility.

The closeness of the Florida election has ripped the veil. On Tuesday night, you could practically hear Baker's insides churning as he spit out his denunciation of the Florida Supreme Court's unanimous decision -- coming after a televised hearing longer and more considered than most U.S. Supreme Court sessions -- as "unfair." On Wednesday morning, Republicans in Miami staged a near-riot at the county canvassing board. If African-American voters led by Jesse Jackson had done the same, Republican spinners would be on Fox TV talking about thugs and brownshirts and some populations just not being ready for democracy. That particular GOP exercise no doubt sped the Miami-Dade canvassing board to its quick decision that no recount could be worth this much tsoris.

Wednesday afternoon Montana Gov. Marc Racicot, a Bush surrogate, turned up the volume even further, charging the Florida Supreme Court justices with "abrogating the law." Then Bush himself played the resentment card, complaining that the court, hiding behind "legalistic language" (quite a surprise, coming from a room full of judges), "rewrote the law" and overstepped its authority.

This is more than a casual reference: Bush, whose speeches far more than Gore's touch symbolic cultural chords, knows that talk of "overreaching judges," "legalistic language" and legislating from the bench and is traditional right-wing code for the civil rights revolution, and everything the far right hates about liberals, Democrats and Clintonites.

As a legal matter, the Bush campaign's Supreme Court appeal is unlikely to get anywhere. The basis for the appeal is that the Florida hand counts deny other counties their voting rights. But as Federal Judge Donald Middlebrooks carefully noted in his dismissal of the Bush complaint last week, Bush had precisely the same opportunity to request a recount in counties of his choosing as Gore. Florida's recounts, Middlebrooks wrote, are a "neutral" procedure. The 11th Circuit Court of Appeals -- one of the most conservative federal appellate panels in the nation -- likewise found no reason to intervene.

But there is a growing sense that Bush and the Republicans have passed some tipping point of rage. Sound political and legal judgement has given way to precisely the same mad-dog stirring of resentment which characterized impeachment. Desperate to hold onto their Florida margin, Bush and his family's retainers have plunged the country into the very same partisan swamp that this election was supposed to escape.

Cheney will probably recover from his heart attack, as Bush has from his boil, but their fury is with us to stay. And unlike heart attacks or boils it is poisonously contagious. No matter who emerges victorious from Florida, the next four years will not be pretty.