Every time Lynne Cheney's morbid novel hits the bookstores, her husband has a heart attack. When you read it, you'll see why. 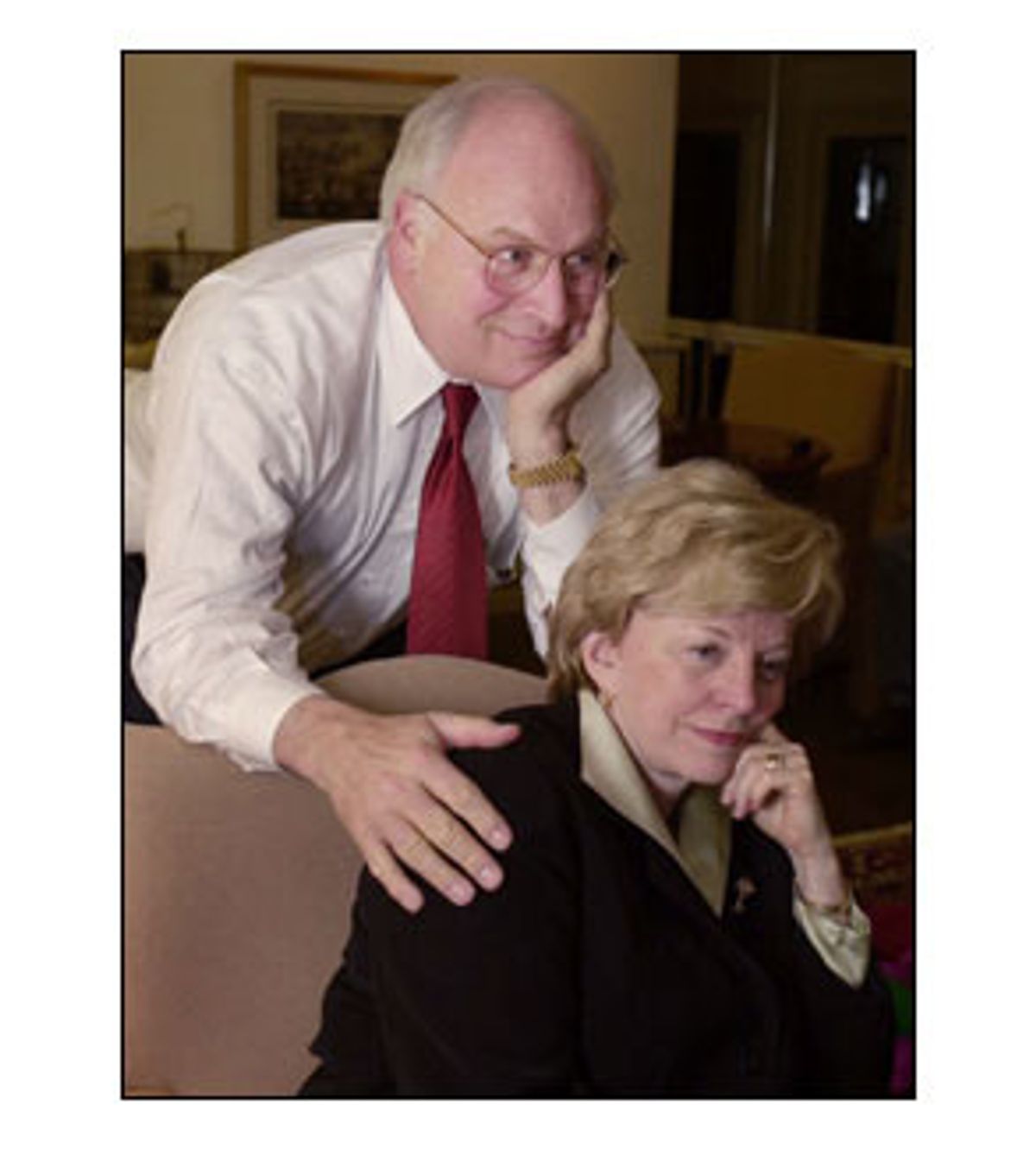 Just in time for Christmas shoppers, Lynne Cheney's long-lost novel "The Body Politic" is arriving in bookstores in a new paperback edition, advertised as "a revealing look at what it might be like to be the vice president of the United States."

Let's hope, for her husband Dick Cheney's sake, that it doesn't reveal what his vice presidency will be like. Mrs. Cheney's fictional vice president, a 59-year-old Republican, dies in office of a heart attack. Her real-life husband is also 59 and has, of course, just survived his fourth heart attack. As one of her characters, a paranoid Secret Service agent, observes, "Life imitates art."

In 1988, when the novel was originally published, Dick Cheney suffered his third heart attack and underwent quadruple bypass surgery. Twelve years later, the novel reappears and Cheney's heart fails again. If he were a superstitious man, he might think his wife's book is cursed.

There is something else in Mrs. Cheney's book that might give Mr. Cheney pause. When the fictional vice president dies, his scheming, ambitious wife participates in a White House coverup of his death and manages to succeed her late husband as the country's first female vice president. Move over, Lady Macbeth.

Mind you, this is all supposed to be funny. "The Body Politic" is, after all, one of those slapdash works of fiction penned by Washington insiders with too much time on their hands. It would be entirely forgettable except for its uncanny coincidences and remarkable reappearance at the most awkward moments.

The 1988 novel first resurfaced last summer when Dick Cheney, in charge of George W. Bush's hunt for a running mate, became the vice presidential candidate himself. That was after Bush Senior placed that private call to Cheney's doctor in Texas to make sure the old warhorse's damaged heart could withstand the rigors of a presidential campaign.

Governor Bush's selection of his father's former defense secretary suddenly returned Lynne Cheney to the limelight. The world hadn't heard much from Mrs. Cheney since her controversial, outspoken tour of duty as Ronald Reagan's chairman of the National Endowment for the Humanities. Even her role as co-host of one of the lesser Beltway talk shows, the now defunct "CNN Crossfire Sunday," was terminated in 1998. But thanks to her husband's rise, she, too, was resurrected. Her friend and fellow cultural warrior, the virtuous Bill Bennett, commented, "She'll be hard to muzzle."

Lynne Cheney did, indeed, eagerly return to the public arena. However, there were two problems. First, the press discovered that one of her daughters, Mary, was proudly and openly a lesbian. Asked by ABC's Cokie Roberts about her daughter's public declaration of homosexuality, Mrs. Cheney promptly denied it, asserting that "Mary has never declared such a thing." This came as a surprise to her daughter's friends and co-workers at Coors Brewing in Colorado, where Mary Cheney worked with a gay and lesbian task force to overcome a longstanding gay boycott of the conservative-owned beer company. "Basically, I don't talk about Mary's personal life," Mrs. Cheney told the sympathetic Washington Times. "We kind of have a mother-daughter agreement. I don't talk about her personal life, and she doesn't talk about mine."

Conservatives were spared a shameful moment when Mary did not, as it was rumored she might, bring her female partner to the Republican Convention. While the rest of the Cheney family smiled to GOP delegates, Mary remained in the background behind her more sexually appropriate sister, Elizabeth, and young niece. But then the other problem emerged. It turned out that when she wasn't rooting out "political correctness" at the NEH, Lynne Cheney was writing novels that were steamy, racy and politically embarrassing. Elaine Showalter, an English professor at Princeton, unearthed one of the books, "Sisters" (1981), which had been published only in Canada. Lo and behold, "Sisters" was "a gothic female historical novel," featuring an account of frontier women in Cheney's home state, Wyoming, who shared an unmistakable "lesbian ardor." In one passage, the female heroine watches two women in an intimate embrace, and as Lynne Cheney writes, she "felt curiously moved, curiously envious of them." Not exactly the sentiments one might associate with a sharp-tongued ally of the Christian Coalition.

That was not all. In "Executive Privilege" (1979), Lynne Cheney writes with sympathy and concern about a troubled president who seeks solace in daily conversations with a staff psychiatrist, only to be betrayed by -- George W. Bush, take note -- his vice president.

As if this rediscovered fiction might not stir up enough trouble, Cheney's "The Body Politic" describes a Republican vice president who dies "blissfully, at age 59, in carnal arrest." In a scene reminiscent of Nelson Rockefeller's demise, Cheney's fictional vice president succumbs while he is having sex with a glamorous network television correspondent in his private townhouse. Cardiac arrest during sex leaves a "beatific smile on the Vice President's face," writes Cheney, describing the corpse. The vice president's fatal tryst with a TV reporter gave "new meaning to the media term one-on-one," muses the deceased politician's press secretary. He is only surprised that his boss, "the ultimate WASP," was sexually attracted to the pushy Italian-Jewish correpondent, Romana Clay. (Such clever names.) "I was still under the impression that his taste in extramarital sex ran to patrician bluebloods, the discreet wives and daughters of America's ruling dynasties. But when I saw Romana at the top of the townhouse stairs in a flesh-colored peignoir, things fell into place..."

When queried last summer about this unseemly prose, Mrs. Cheney tried to dismiss the sex scenes as the work of her co-author, Victor Gold. His name, after all, appeared first on the hardback. Inconveniently for Lynne Cheney, the order has been reversed on the new paperback: Her name now appears first in bold letters above the title. Moreover, the publisher's blurb on top of the back cover prominently touts Lynne Cheney as "the wife of Republican candidate for vice president Dick Cheney."

For a woman who may soon become our second lady, Lynne Cheney does nothing but disparage the office of vice president in her comic novel, arguing that "for a Type A overachiever, the Vice Presidency is the worst kind of career move." "Under the Constitution the only thing the job calls for is waiting," writes Cheney, "waiting for the President to die or be impeached; waiting for the Senate to wind up in a tie vote so the Vice President can break it."

Again, that last phrase now carries more weight than when she wrote it. If Dick Cheney actually makes "the worst kind of career move" and becomes vice president, he will apparently be at the beck and call of an equally divided Senate, with 50 Republicans and 50 Democrats. Will he, too, regard this duty as burdensome and odious? All the waiting forces Cheney's fictional vice president, Bully Vandercleve, to seek relief in adultery, or as Cheney indelicately puts it, "It was only a matter of time before he started looking for ways to drain his Type-A batteries."

Will Dick Cheney feel similar urges? In an exquisitely divided Senate, there will be even more intrigue and political drama than in Cheney's novel, where the Senate threatens to deadlock over a Cuban resolution (yes, even incensed Cuban-Americans figure in this clairvoyant novel). What toll this heated political maneuvering might take on Dick Cheney's physical and mental health remains, perhaps, for another novel.

And what might we predict about Lynne Cheney's behavior as second lady from "The Body Politic"? Her alter ego is Cissy Vandercleve, the adulterous vice president's wife with "hot hazel eyes" and a "French vanilla complexion." The important thing to know about Cissy is that she is ambitious, launching her career as a conservative crusader with a campaign to commemorate Ayn Rand on a postage stamp. The other thing about Cissy is that she is fed up with her role as appendage to a Washington politician.

Even Lynne Cheney's friends describe her as ambitious and driven. She relishes political combat like her character Cissy who "loved the game" of politics but resents her second-class status as a woman. Lynne Cheney wrote an article in 1985 called "The Decline of the Dutiful Wife" in the Washingtonian magazine, and as Lingua Franca discovered, an author's note describes her as "willing to help in her husband's campaigns ... but only if she's given a speaking role."

Lynne's comic persona, Cissy, sheds no tears over her philandering husband's demise. She immediately joins the plot to pretend the vice president is still alive, in order for the Republicans to win the presidential campaign. When the farce draws to a close, she has clawed and maneuvered her way to the top, replacing the late Bully as No. 2 on the GOP ticket. Wish fulfillment, or merely a second-rate plot that Lynne Cheney may regret writing? In any case, it resurfaces at a particularly awkward moment in our presidential history. One wonders who is at fault here: the publishers, St. Martin's, who could not resist an opportunity to resuscitate a mothballed novel in hopes of cashing in on Dick Cheney's new position, Mrs. Cheney or both?

Before leaving "The Body Politic" and returning to our national drama of electing a president, I feel compelled to mention two other unfortunate episodes in Lynne Cheney's "revealing look" at the vice presidency. There is, for example, the matter of assassination. "It's the nut mentality," warns her Secret Service character. "They're looking for a challenge, see? Something to get them on the evening news. Nobody's ever shot a Vice President before. Presidents, popes, senators, governors, preachers, rock musicians, they've been shot. But never a Vice President. It would be a Guinness first." This comes as a frightening suggestion of what might happen, halfway through the satiric novel. I can't imagine Dick Cheney would find it a particularly comforting thought.

And then there's the fate of the president, a nervous man who does not react well to pressure. His aides treat him like a child. They withhold vital information, including the fact that his vice president has been dead for six weeks. Without informing the hapless president, they hire a Las Vegas comedian to impersonate the Vice President on the radio. The impersonator is named Moishe Feinbaum, but he's actually an African-American ex-Baptist. Oy vey! (Remember, Lynne Cheney thinks this is funny.)

Cheney and Gold portray the executive-office Republicans they know so well as manipulative, conniving, ruthless men who will do anything to seize and hold power, deceiving Congress and the American people without a moment's hesitation. There are characters who remind us of Alexander Haig, H.R. Haldeman and G. Gordon Liddy conducting "dirty tricks" and bugging and intimidating their opponents. President Bush is even mentioned by name as someone, like Oliver North, who undertook a secret (and perhaps illegal) overseas mission. To win the presidential election, the Republicans shamelessly exploit the Hispanic vote, passing out "fortune enchiladas" with a message inside, in Spanish, saying vote for the Republican candidate.

The GOP presidential aides sneak their boss into Bethesda Naval Hospital when his blood pressure soars. They lie to the press, saying the president is only undergoing a routine checkup. When the president in "The Body Politic" is at last told the truth about his deceased vice president, he collapses from a stroke or a heart attack, and dies.

I don't think George W. Bush has anything to worry about, though. Despite the soaring tensions of the election stalemate, the Texas governor is still jogging and they say his blood pressure is fine (although his face did erupt in that nasty boil). As for Dick Cheney, he can rest somewhat easy -- as far as I know, his wife is not yet writing another novel.