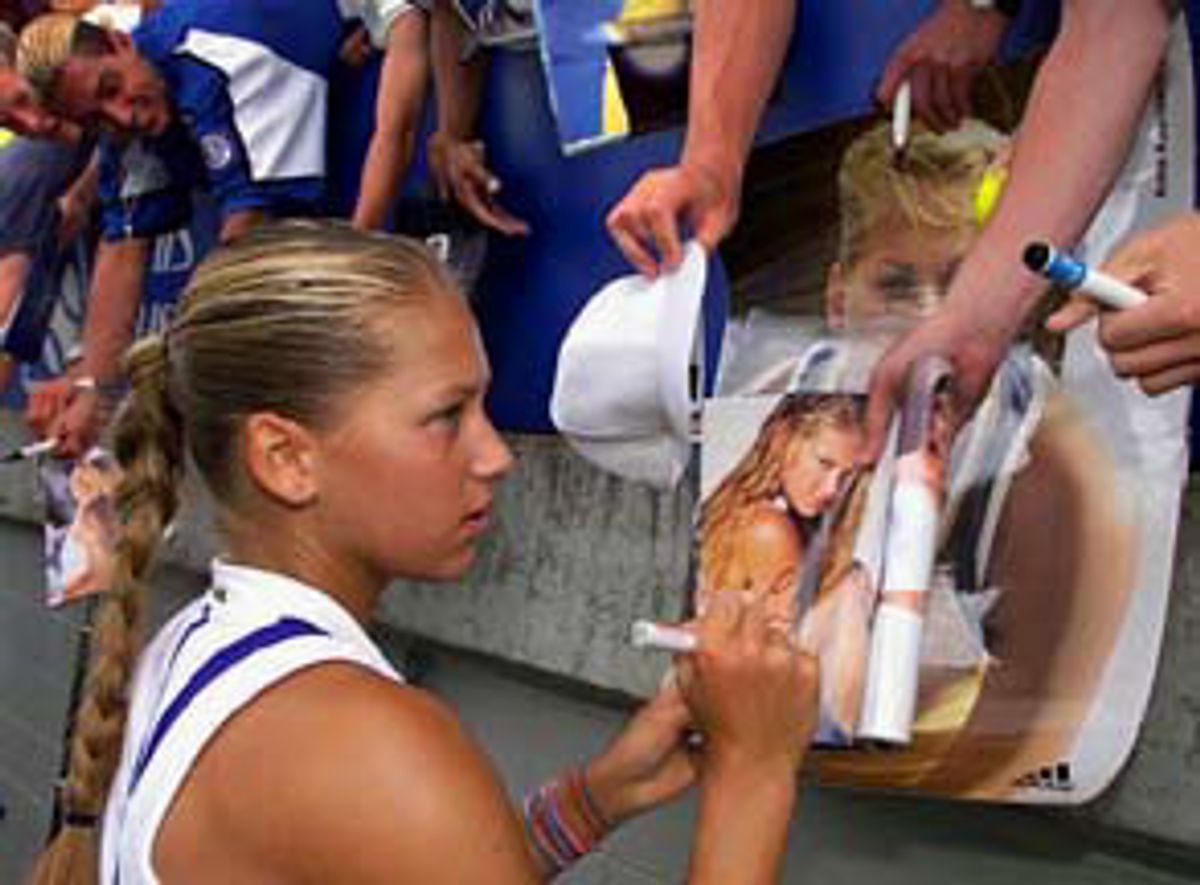 I've been trying to get a hook on mediocre tennis player Anne Kournikova ever since Frank Deford's smarmy cover piece in Sports Illustrated in June. "Anna is that kind of gorgeous," gushed Deford, "and Anna knows it." Well, maybe yes and maybe no. Maybe she just got too used to reading puff profiles like Deford's.

Myself, I just don't get it with Anna on or off the court; I could flip through a selection of TV game-show hostesses and find someone more worthy of my attention. Deford shares Anna's view of herself that people only think she's beautiful because she's such a renowned tennis player: "If Catherine Zeta-Jones were still a shop girl in Wales, how many people would look at her in quite the same way as they do now that she is a movie star?" Uh, Frank, if people who saw her as a shop girl in Wales saw her that way, she wouldn't have gotten out of the shop and become a movie star. What's your point?

But I digress. I just wanted to say that Allen St. John crystallized my point of view last week in the Village Voice. Writing about the Chase championship, he said: "Anyone who suggested that the Garden would host her coming out party didn't seem to understand that Anna is to tennis what Britney Spears is to music." Damn, wish I'd said that.

By the way, this is the woman who saw Elizabeth Hurley at Wimbledon and thought she was "ugly." Maybe Anna's problem is poor eyesight?

Last week I wrote about the increasing pressure Venus and Serena Williams and their father, Richard, are putting on the World Tennis Association for appearance fees. Can't you just imagine how loud Mr. Williams would scream racism if the WTA actually started paying such fees and Anna, perhaps the world's 23rd best female tennis player, got more money than his daughters?

What is Anna going to be doing two years from now? My bets: the autograph circuit and a syndicated talk show, "Anna's Maniacs."

Regarding John McEnroe's resignation last week as Davis Cup captain, I have to say ... Well, actually, I don't have anything to say. I don't give a damn about the Davis Cup; it can fade away and be replaced by monster truck racing for all I care, and everyone else in the world -- including the top tennis players, to judge by their attendance -- feels the same way.

What I want to say something about is the plethora of "John fought the good fight" and "McEnroe's heart was in the right place" editorials. If McEnroe's motive behind bullying every major U.S. tennis player into feeling guilty about not playing on the Davis Cup team represented anything besides ego and a stage for him to constantly display his own childish temper, it wasn't in evidence. Publicly questioning Pete Sampras' integrity -- hey, there's a terrific way to put the press on your side. Whoever thought McEnroe would succeed in that position is the kind of person who would ask Bob Knight to coach the Olympic team.

As if Congress can't find enough ways to waste time and taxpayers' money, Sen. Mike DeWine -- whose name should be changed to DeWhine -- convened a congressional hearing Wednesday to address the problem of revenue-defined "haves" and "have-nots" in baseball. "Every team ought to have hope at the beginning of a season," said DeWine, a Republican from Ohio, whose Cleveland Indians have been the second winningest team in the American League since 1994 and whose Cincinnati Reds won a World Series more recently (1990) than the New York Mets, Los Angeles Dodgers and Chicago White Sox. "Unless," he continued, "we do something to correct the payroll and revenue disparities among the teams, baseball cannot survive."

Someone might have pointed out to the senator that baseball has survived very well for a century with just such a structure, but never mind, let's go ahead and admit it is unfair.

So, what to do about it? Well, Senator, there was Bud Selig, the commissioner of baseball, and George Will, a member of the owners' bullshit "Blue Ribbon" panel on economics, seated right there, so why don't you ask them? DeWine did, sort of, but all Selig did was shake his head and tsk-tsk about the state of the game and mumble things like "Unless something is done, the disparities will grow."

Remember, this is supposed to be baseball's "czar," the man with theoretically unlimited powers to take action in "the best interests of baseball." Of course, in this case the best interests of baseball are to tell the small-market owners they must band together and take the revenues by force from the big-market clubs, but Selig likes his job and isn't about to test his "unlimited powers" on those who hired him.

At no time during this economic love fest did anyone mention that no one from the Players Association was present to argue that there is absolutely no necessary connection between revenue sharing and forcing a salary cap on the players -- which, of course, is what this sham was all about, the unspoken subtext being that the rich teams will never voluntarily share revenues unless they get something back for it, in this case the backing of the smaller clubs to stand with them in a fight to lower the players' salaries. So what we got was a three-hour commercial on CNN for the baseball owners, at taxpayers' expense.

Show us the money, Lupica

I'm going to keep a Harpo Marx-style seltzer bottle next to my TV and squirt Mike Lupica in the face next time I hear him moan about how athletes and sportswriters have grown apart because of money and how much better it was when players and writers rode the trains together, played cards together and, presumably, agreed to publicly support each other in perpetrating myths. Someone needs to tell Lupica that when journalists have reached his level on TV they are no longer in "journalism" but in show business and that he has much more in common with modern players than with the fans.

The next time Lupica derides a player for holding out, he should be reminded that his own revenue streams (which, like athletes', include lucrative contacts for writing crappy books) are enhanced by "free agency" in the form of new publications and TV outlets and by agents who are no less ruthless in dealing with publishing houses and TV executives than players are when dealing with baseball owners.