Our long national nightmare is over. We finally have a new leader: Dick Cheney! 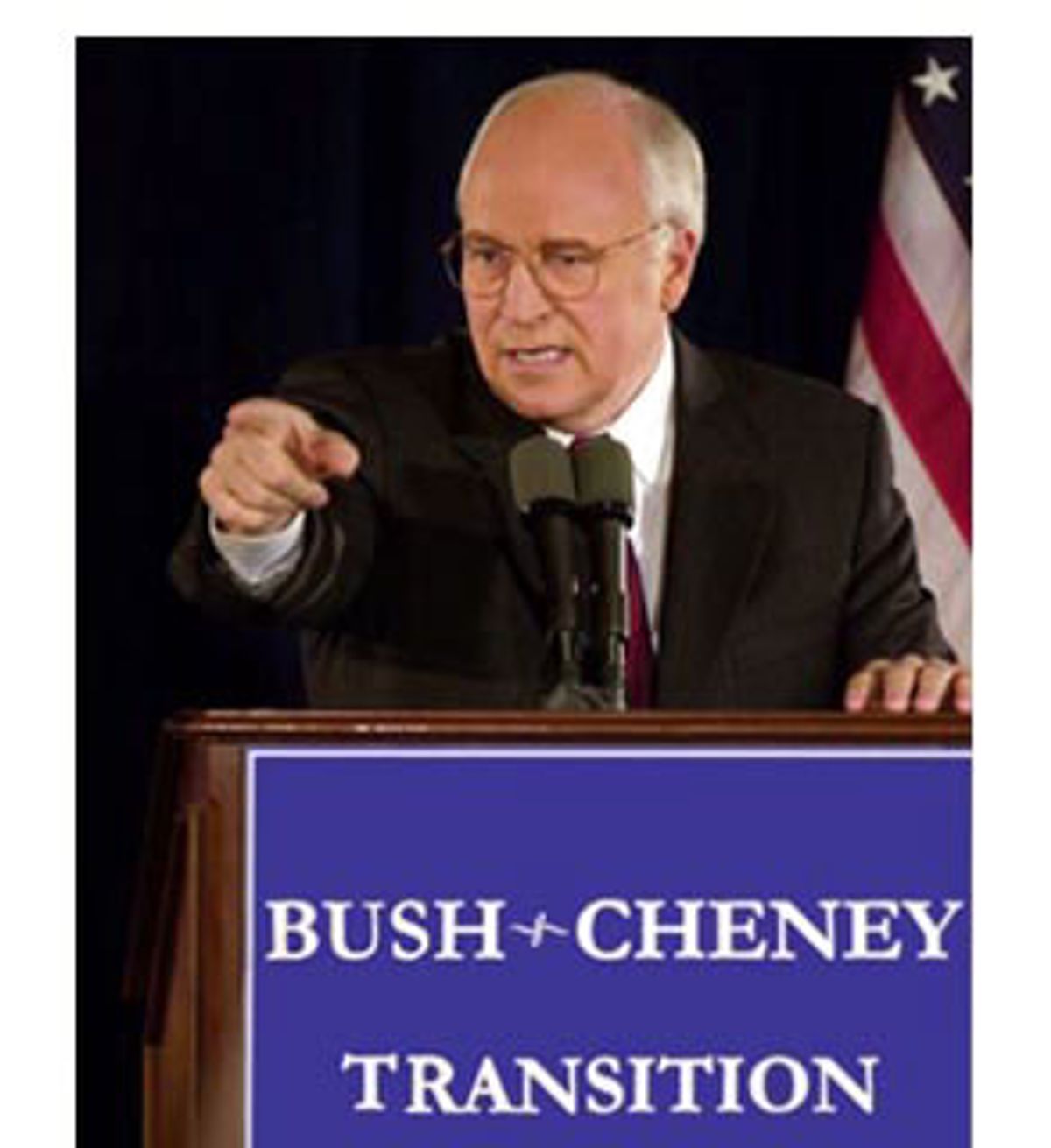 Our long national nightmare is over. Indecision 2000 is behind us, and we finally appear to have a new president-elect: Dick Cheney.

Consider the evidence: On Monday, Cheney went back to Washington, while Gov. George W. Bush stayed in Texas, leaving Austin Tuesday for his cozy Crawford ranch. Nominally Cheney's job was to begin transition proceedings, but he appears to be doing much more than that.

On Monday Cheney announced the Bush administration's first appointments: Old Bush hand Andy Card as chief of staff, campaign spokesman Ari Fleischer as transition team press secretary. Wednesday he added some more names to the list, including his own loyalist, David Gribbon -- he worked with Cheney in the Defense Department and at Halliburton -- who will become director of congressional relations.

Maybe most significant, and disturbing, Cheney told reporters Wednesday that he'd be receiving the daily security briefings that the Clinton administration announced it would provide to Bush during this uncertain transition (Al Gore already receives them as vice president.)

Our new president-designate is not exactly tanned, rested and ready, as they used to say about Dick Nixon. He's ghostly white, exhausted and recovering from his fourth heart attack. But you've got to admire Cheney -- he's clearly got more vigor for governing than the guy at the top of the ticket.

W. is scaring people, maybe including himself. While Gore has been everywhere the last few days making his case, however woodenly, from his driveway in D.C. to NBC's "Today" show, Bush has been hiding in Texas. His speech Sunday night claiming victory was alarming. He looked frightened and a little simian, blinking wildly, appearing to shrink down into the collar of his shirt as he spoke. (Was it just the haircut, or has his head actually grown smaller in the last week?)

In Wednesday's New York Times Maureen Dowd nailed it: "He struggles to exude authority. He furrows his brow, trying to look more sagacious, but he ends up looking as if he has indigestion. Appearing confused at his own speech, he seems like a first-grade actor in a production of "James and the Giant Peach." Are his blinks Morse code for 'Oh, man, don't let that teleprompter break'?"

Bush moved from the Governor's Mansion in Austin back to Crawford, aides told AP, because demonstrators outside "had started to get on [his] nerves." Bush press secretary Karen Hughes tells reporters he's "thinking and reflecting" on his ranch, and though Dowd doesn't buy that (he's not "Proust in the brambles," she rightly notes) I can actually believe he's mulling over the mess he's gotten himself into.

Dowd calls him "Mini-Me" -- a photo of the former president Bush as Dr. Evil from "Austin Powers: The Spy Who Shagged Me," with his son on his knee dressed as Mini-Me is all over the Internet -- and it's clear he's lost his shame about relying too much on his father's old court. "He's not the candidate -- I am," Bush said about his father when he declared his candidacy in March, 1999. His advisory group was packed with Texas loyalists as well as old Bush hands. But the old man's fixers, from Secretary of State James Baker in Florida to Cheney himself in D.C., are firmly in charge now.

Now Cheney and another Bush man, Gen. Colin Powell, are headed down to Crawford for a visit with the incredible shrinking would-be president-elect. Powell is rightly resisting being named Secretary of State while there's still legal battling over whether there will even be a Bush administration, but he's agreed to make the trip to Texas "to discuss how you might put together your national security team," Cheney said Wednesday.

Republicans seem mostly resigned to the fact that though they nominated one man as president, the No. 2 choice will do the work. One GOP source described the new presidential structure to CNN as "Bush as chairman of the board, Dick as CEO and Andy [Card] as COO." It's not in the Constitution, but hey, whatever works.

Bush seems more like the chairman of the bored, weary already of the strenuous business of government. So all hail Dick Cheney, who's stepped into the breach as acting president-elect. We didn't elect him, but then we probably didn't elect Bush either, and we might as well have someone at the helm who wants the job.