The gayest story ever told

Showtime's hot new soap "Queer as Folk" has wit, wisdom and heartache to spare. And sex. Lots and lots of sex. 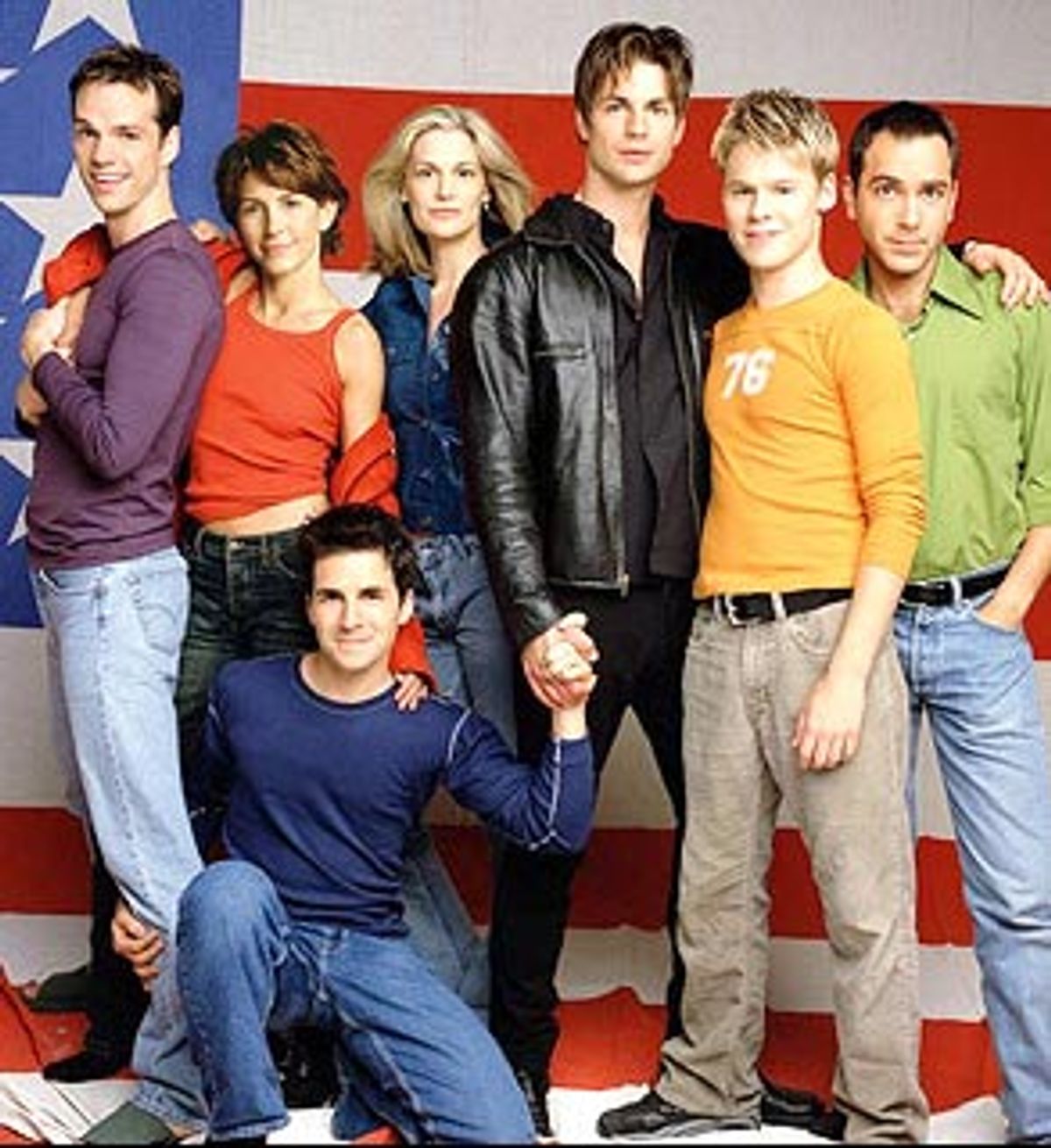 Showtime's "Queer as Folk," the Americanized version of a show that set the U.K. atwitter when it premiered on Britain's Channel 4 last year, is the most explicitly homocentric drama series ever seen on these shores. Anticipated as a sort of great gay hope for American television, "Queer as Folk" has an awful lot to live up to. And it does. Proud and loud, the show is payback for every gay character on a prime-time drama who never got any good story lines, for Will and Jack not being allowed to kiss any men except each other, for Ellen DeGeneres being mummified as TV's Lesbian Saint and for the networks asking us to believe that John Goodman is gay but Frasier Crane isn't.

Unlike much of gay-themed American TV, "Queer as Folk" (the title is British slang meaning, roughly, "there's nothing as strange as ordinary people") is neither campfest nor cautionary tale. The most fascinating character on the series is a gorgeous, self-absorbed sexual conquistador who always gets what he wants, never says he's sorry and doesn't appear to be in imminent danger of becoming a made-for-TV AIDS martyr or gay-bashing victim. All of which makes "Queer as Folk" the first American series (sorry, "Ellen") to capture gay life in all its glorious complexity, without preachiness, polemics or self-censorship.

Adapted for American TV by Ron Cowen and Daniel Lipman (who wrote the first AIDS TV movie, "An Early Frost," as well as the series "Sisters") with the show's British creator, Russell Davies, acting as a consultant, "Queer as Folk" has everything you'd want in a well-oiled -- in every sense of the word -- serial. The show's tangled plotlines about a group of gay friends (and one lesbian couple) in Pittsburgh are instantly addictive, the cast of mostly unknowns is pretty damn fabulous and the show has wit, wisdom and heartache to spare. And sex. Lots and lots of sex.

In fact, "Queer as Folk" is all about the sex. There's so much of it (in bedrooms, bathrooms and back rooms), and so much talk about it, that it's tempting to call "Queer as Folk" the gay "Sex and the City." After all, "Queer" narrator Michael Novotny (played by former "Talk Soup" host Hal Sparks) is as adorably self-analytical as Sarah Jessica Parker's Carrie Bradshaw, and the comical parade of Mr. Wrongs encountered by Michael and his friends rivals anything Carrie and Co. have encountered.

The randy, random couplings of "Queer as Folk" might unsettle some people who lived through the AIDS-clouded '80s and early '90s. And the specter of AIDS is present: One of the characters has a middle-aged uncle who is living with the disease. But this is mainly a joyful series about gay men 30 and under -- a resurgent generation, removed from the epidemic, tasting (and testing) freedom. Writers Cowen and Lipman, with co-producer/writer Jonathan Tolins (the play "Twilight of the Golds"), are under no broadcast network edict to impose heterosexual values and romantic ideals on gay characters. So "Queer as Folk" dives giddily and explicitly into something a show like "Will & Grace" is only able to talk about -- the idea that, for a gay man, love and sex, commitment and pleasure, aren't necessarily a package deal.

Showtime, which aired one of the first sitcoms to feature a gay lead character ("Brothers") way back in the mid-1980s, has built up its queer-friendly credibility lately with original programming like "More Tales of the City" (the network stepped in when PBS chickened out of the project) and the Harvey Milk docudrama "Execution of Justice." The premium cable network has pulled out all the promotional stops for "Queer as Folk," organizing screenings in the gay community and advertising heavily in the mainstream media. Lagging behind HBO in turning out buzz-heavy original series, Showtime is hoping that "Queer as Folk" will become a must-subscribe hit, like "The Sopranos" or "Sex and the City." And the engaging two-hour series premiere Sunday does what any successful serial needs to do -- it makes us want to know what happens next.

The first episode begins with Michael and his three best friends cruising the gay strip, Liberty Avenue, and ending up at their favorite dance club, Babylon. Michael is bighearted and puppy-dog sweet; he's a comic-book fanatic who works as an assistant manager at a Kmart-type discount store, where he is deeply closeted. Ted Schmidt (Scott Lowell) is an accountant with self-esteem issues and a taste for cyberporn and opera; he's also closeted at work. Emmett Honeycutt (Peter Paige), who works as a window dresser, is a transplanted Southern belle who, as he says, lets his flame burn brightly.

At the center of their universe, and the show's, is the unabashedly narcissistic Brian Kinney -- cruel, irresponsible and irresistible. Played by Gale Harold, Brian is all boyish full-lipped beauty and feline, almost predatory, sexuality. When he's on the screen, you can't look at anyone else. Brian could easily have been a stereotypical slut. But Harold doesn't overplay Brian's shamelessly seductive antics or his moodiness; he gives an exquisitely nuanced and layered performance that makes you glimpse Brian's better nature and his deepest insecurities.

In a dreamy, erotic flashback, we learn that Michael and Brian were boyhood pals who almost became lovers. They were swooning over a picture of "Dirty Dancing"-era Patrick Swayze in Michael's bedroom and Brian took matters, um, into hand. But they were thwarted when Michael's mother walked in on them without knocking. Michael has never quite gotten over Brian. And Brian, although he won't admit it, has a proprietary interest in "Mikey" (his pet name for him) as well; he jealously scares away (or steals) his potential boyfriends, draws him into lingering, teasing kisses on the dance floor and calls him at all hours when he needs someone to clean up his messes.

An advertising executive, Brian is a master of the come-on and the disposable desire. When he's on the make, Brian drops his studied aloofness and gazes at his prey as if he's the most fascinating person in the world. The word on Brian is that he never has the same guy twice. And he is most definitely a top. Brian represents tantalizing sexual freedom; he does exactly as he pleases and, until now, has gotten away with it. But as "Queer as Folk" opens, Brian's emotional fortress is under attack. He's about to turn 30 and fears losing his edge. He has agreed to be the sperm donor for his lesbian friend Lindsay (Thea Gill) and her partner, Melanie (Michelle Clunie), and the consequences of this are becoming clear to him. And he has just spotted the most delicious prey of all -- a blond, cherry-ripe, suburban teenager named Justin Taylor (Randy Harrison), who adores him at first sight.

The Brian-Justin story line (a source of controversy in Great Britain) is the show's riskiest, and its most compelling. (The openly gay Harrison, who plays Justin, may look 17, but he's 23.) You fear for the innocent boy, wandering into Brian's clutches, especially when the older man takes him home and makes love to him, feeding him that favorite line of older seductors everywhere: From now on, whenever you do this, you'll think of me.

Brian tries to unload Justin after their first tryst: "I don't believe in love, I believe in fucking. It's honest, it's efficient, you get in and out with a maximum of pleasure and a minimum of bullshit," he tells the love-struck kid. Michael, of course, ends up taking Justin under his wing and trying to convince him that he's in over his head. But Justin keeps coming back to Babylon, enduring Brian's snotty put-downs ("Hello, Dawson. How are things back at the creek?") or, worse, his indifference. It soon becomes apparent, though, that the bratty Justin can give as good as he gets, and Brian is intrigued. These two are locked in a dance of wills, and when Brian flashes a sleepy smile of sudden tenderness and breaks his rule about having the same guy twice, you wonder, Does he really care, or is he playing with Justin in a self-centered attempt to hold onto his own fleeting youth?

This is the stuff of great soaps, not to mention great romance novels. Which isn't to imply that "Queer as Folk" is a bodice-ripper; it's just that it deals with heavy issues in a nimble way as our heroes variously come out, experience homophobia, struggle with the love/sex dichotomy, develop mad crushes, have their hearts broken, cope with aging and the loss of physical perfection and get over themselves. Lesbians may be less taken with "Queer as Folk" than their gay brethren, though; if there's a major flaw in the show, it's the superficial depiction of Lindsay and (especially) Melanie as boring, scolding mommy figures, always criticizing the boys for being, well, boys.

And the character of Michael's supersupportive mother, Debbie (Sharon Gless), is similarly unflattering, although she's not meant to be. Debbie is a waitress at the Liberty Diner, dispensing condoms and advice along with the meatloaf and java. A fairy godmother festooned with PFLAG and rainbow pins, with a godawful red fright wig on her head (at least, I hope for Gless' sake it's a wig), Debbie is supposed to function as the series' Good Heterosexual. And every line her too-colorful character utters could have come from either an "Afterschool Special" ("It's not who you love, it's how you love") or a gay vaudeville act ("You should try to eat some of your protein off a plate!" she chortles to Michael and his pals, while Michael sinks lower into his booth). And since I'm kvetching, here's a word about director Russell Mulcahy's whooshy music-video camera tricks in the dance club scenes: tacky.

But some of the strongest and most affecting moments in "Queer as Folk" are the ones where Debbie tones it down and tries to comfort Justin's mother, Jennifer (Sherry Miller), who is struggling through a whirl of parental emotions. Jennifer loves her son fiercely and tries to be accepting, but when she spots Justin and Brian together, and sees a sketch her son made of his naked, sleeping lover, her maternal instinct takes over, her eyes narrow and she can barely keep her anger in check.

"Queer as Folk" doesn't sugarcoat these messy emotions, just as it doesn't pass judgment on Brian's recklessness or on what any of the characters do with their personal liberty, which is a very brave position for a TV series to take in homophobic America. The most impressive thing about "Queer as Folk" is that it doesn't seem to care whether it plays in Peoria. Instead of repeating the same well-meaning but vague TV-movie shibboleth that, gay or straight, we are all exactly the same, "Queer as Folk" shows us the many ways that we are not the same. And it expects heterosexual viewers to respect the difference.